First of all, thank you for all the feedback in the previous thread; much appreciated, even if I haven't gotten round to answering each individual one.

Several issues are fixed in this release, some won't be.

In case you don't know what this message is about, please start with reading this link, which explains the Venus OS beta program.

The version we're working on, v2.80, has a few highlights: the new AC Load monitoring, the new DC metering function, and also various improvements to the HTML5 MFD App, including the addition of translations as well as the added support for the Ruuvi Tag wireless temperature sensors.

Same as before: the new features I mentioned just now. As well as, just like announced previously, basically everything: there are several major changes in v2.80, which can each make things break in unexpected places. For those interested in the details, the changes I'm referring to here are (a) that the used Python version has been updated from 2.7 to 3, (b) the Open Embedded release was upgraded from Zeus to Dunfell, and lastly (c) we changed to a read-only rootfs. All combined this means that lots of tools and packages used will have changed to a newer version, and lots of Victron code has been changed to be compatible with Python 3.

Lastly, if possible please revert to v2.73, to double check if the issue you're seeing was present there as well. Regressions require a different treatment than other issues and bugs, and one of the first things that needs doing in triaging a report is distinguishing between the two.

Development and testing will continue for quite a while; we won't make September anymore :), and not even October. So rather then promising a new months lets stick to the more generic "end of this year".

All the best and have a good weekend,

Changes since previous test version, which was v2.80~21:

Getting blank page running ~24 with Gui Mods. Reverted to ~17 to fix the issue.

Hi, thanks. I've made a new Question/Answer thread here: please use that. Thanks.

Site is on our VRM 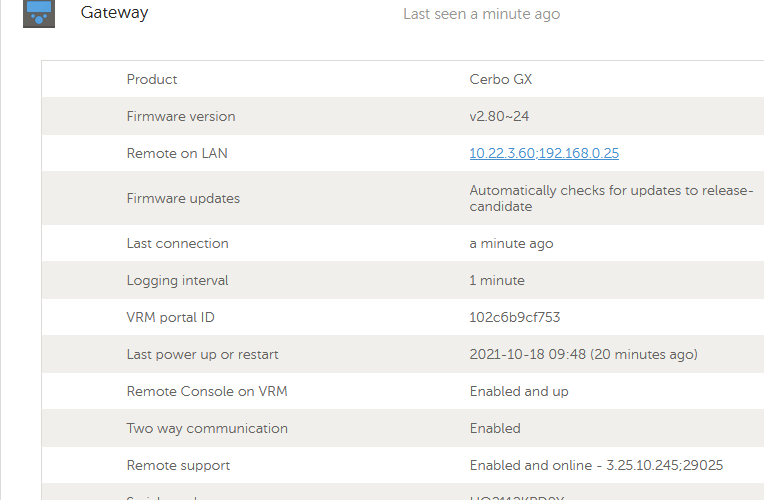 I have problem with solar radiation sensor Si-RS485TC. Sensor don't work with any 2.80 version Venus OS on RPi3. The sensor data is not even displayed, but in the version 2.70 sensor working properly. Tomorrow I'll test if the sensor works on CCGX.

Update : Sensor on CCGX work with Venus OS 2.80~24 without problem.

This has happened twice now, where the system does not pick up the Carlo Gavazzi, on v2.80~24.

After a load-shedding event when power returns, the system does not register the Carlo anymore, and nothing I do can make it register again.

I tried to:
Reboot the Cerbo 3-4 times.
Unplugging the Victron RS485 to USB cable from the Cerbo, with a reboot and without.
Redetect the inverter.
Reset the inverter.

The only option that has worked twice so far was to re-install v2.73, once installed, reboot it again, and then the Carlo is picked up again.

Can then re-install v2.80~24 if one wants, till the next load-shedding event.

During this time it "sounds like" the inverter is in some mode as it works as if it is discharging/charging the batteries, but it is not, as no current is entering or leaving the batteries that I could see.

EDIT: Had another load-shedding just now, on v2.73 all works perfectly.

@mvader (Victron Energy) the next load-shedding ... still waiting for one.

If someone can have a quick look then, I would appreciate, as the system will be "in limbo" till the Carlo is picked up again after 8h30

The problem is that that driver isn't properly terminating; and as such holding up the process of refinding the Carlo Gavazzi energy meter.

I first reported it to the driver supplier before reporting it here. Have also been provided with a workaround, so absolutely no stress nor worries. I've got it from here. Will be testing it momentarily. ;-)
Thank you guys for the awesome support!

@mvader (Victron Energy) Not specific to this version, under the BMS entry -> Device, the GX reports the BMS version detected from the BMS.

Currently this is a 2-digit field, is it possible to increase this to 3 digits so firmware like 1.0x can be displayed?

We are seeing that the INCOMING amps are displaying incorrectly ie as below shows it as 9.2 when in fact its actually 17 amps.

ESS assistant has been installed

Has anyone got a suggestion as to why this is happening and / a solution ???

I am thinking that a very bad power factor maybe causing this, but the readings are so wrong that its very misleading. 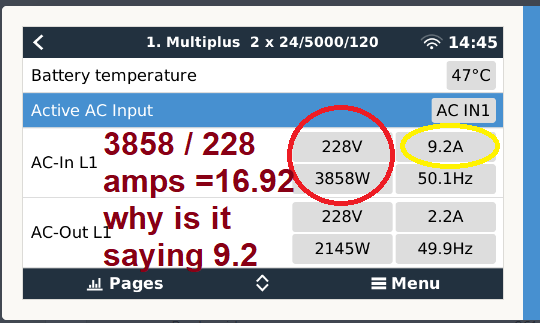 this started to happen on firmware 487, with a VE BMS assistant installed - But the ve-BMS was unplugged and I was trying to do a remote update/upgrade the fw to 489 but this stalled at 20.5%

so now I have manually upgraded the firmware to 489 by going to site. thinking this would fix the issue

we have one VE-BMS connected

there is NOW no assistant installed as 489 FW does not require it with the new tick box ticked and the ve-bms is working correctly as when I unplug the VE-bus cable from the VE-BMS the inverter shows low bat and switch's to pass through as it should.

so everything is working on site and the vrm and remote console is working but I still get this error : Error: mk2vsc-33

Anyone got any ideas as to how to overcome this issue 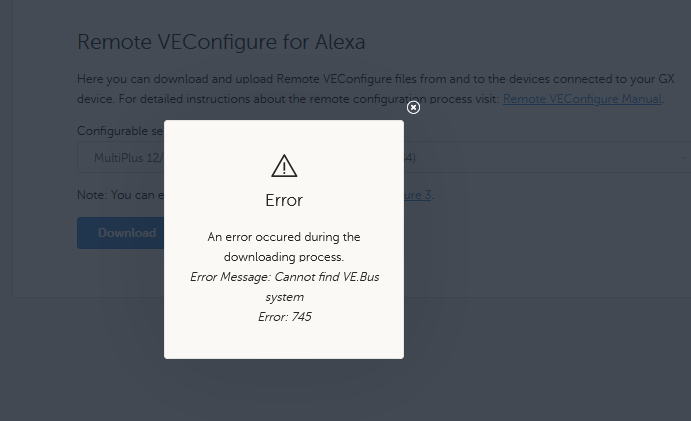 The secound battery monitor is a 123smart BMS 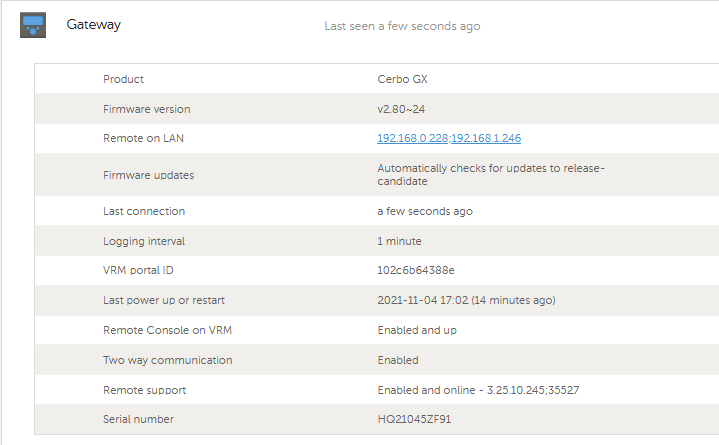 Hi, I had similar problems on the weekend upgrading my Multiplus II to version 490. The first problem was that the upgrade would not continue past the init stage (20.5%). This was fixed by powering up the AC input. I also found that I was unable to download the config unless power was present on the AC input. Given that you also need to unplug any other VE Bus devices (i.e., Digital Multi Control) I would suggest this is a job best done onsite using a windows laptop with VEConfigure installed. I hope this helps.

had identical issue of being stuck at 20.5%, had to manual update with windows laptop

As I see there is few changes around AC which are interesting for me.

I'm using not typical instalation (during being build) Fronius Inverters and Eastron SDM630 grid metter (with Modbus driver found in that portal) - what is important i do not have VEBUS central device yet. On Venus 2.73 it worked bad - meter was discovered and even power was calculated but not shown that values on Venus and in VRM portal.

Meter is shown properly in Venus:

Even in VRM in instalation view:

But not in detailed VRM view: 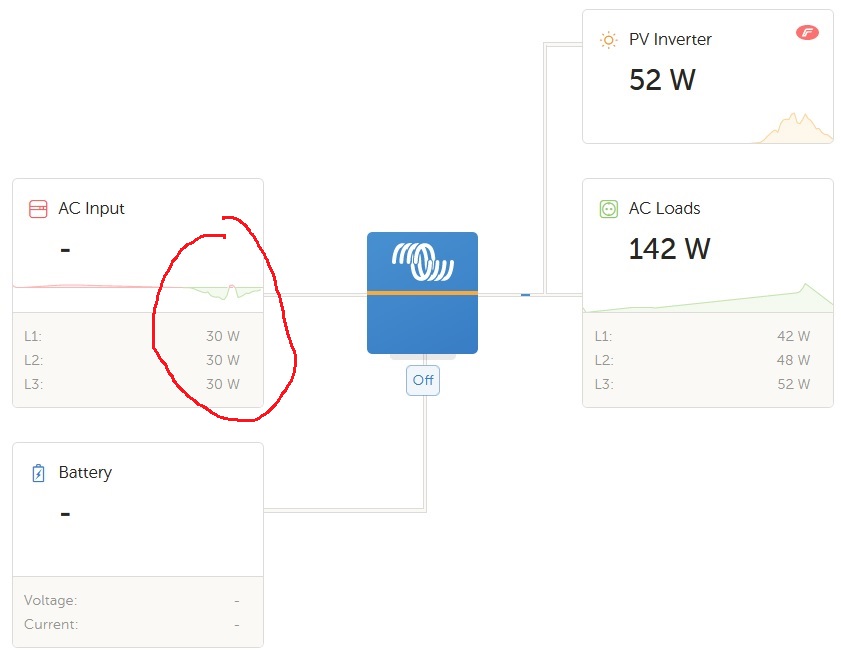 What is strange - it shows proper power on each phase, even on the chart!!! (is calculated properly) but not in summary AC Load!!! Why?

That value is also not used to daily graph and value:

Mayby this is because I'm unable to set up Settings/System/AC Input 1 as a Grid - but as I see this setting is not remembered without Victron central device.

What's happened to this project? It has all gone quiet with no updates since this update.

Maybe this is a good idea to keep in thee catalogue notes with changelog?

47 People are following this question.