In case you don't know what all this is about: this message is part of the Venus OS Beta test program. Read that link for more information.

Already, v2.80 is has some quite noticeable new features. For example the completely new AC Load monitoring, the improvement in the Total of all phases mode for ESS, the new DC metering function and still more. This new version mainly adds a few more minor improvements.

The new features I mentioned just now. As well as, just like announced previously, basically everything: there are several major changes in v2.80, which can each make things break in unexpected places. The first change is that the used Python version has been updated from 2.7 to 3. Also the Open Embedded release was upgraded from Zeus to Dunfell, and lastly we changed to a read-only rootfs. All combined this means that (a) lots of tools and packages used will have changed to a newer version, and (b) lots of Victron code has been changed to be compatible with Python 3.

Lastly, if possible please revert to v2.73, to double check if the issue you're seeing was present there as well. Regressions require a different treatment than other issues and bugs, and one of the first things that needs doing in triaging a report is distinguishing between the two.

Development and testing will continue for quite a while; I expect at least until late September; possible also into October this year. The main new feature that needs further completion is DC metering for both loads and production (alternator or hydro or wind for example).

Changes since previous test version, which was v2.80~16:

I forgot a major one! 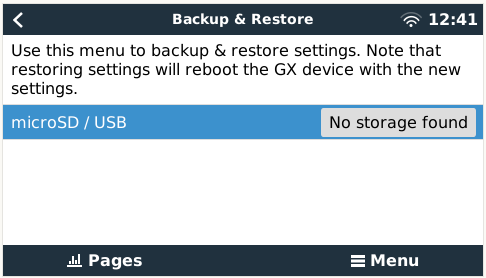 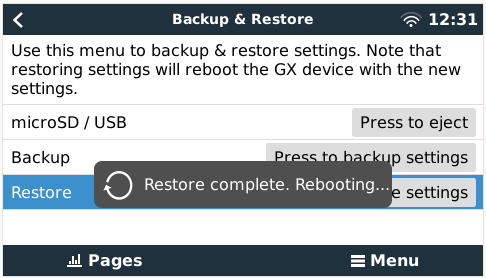 Its primary application is to reduce the amount of work for OEMs doing series production of hybrid generators, boats, cars, trucks and so forth.

And ofcourse a secondary use case could be to have a backup in case the GX device fails, and/or reduce the amount of work involved when upgrading from, say a CCGX to a Cerbo.

The new feature can be found at the bottom of the Settings menu.

Good to know is that while many settings can be imported and exported with this, there is also a list of settings that can't be - mostly because those settings are tied to a serial number of, for example, an Energy meter.

The restore option is restricted to access level installer. The backup option is not.

What doesn't work is:

EDIT: Lastly, be ware that the feature isn’t fully completed yet: there is an issue for offline (no internet) systems that don’t already have an sdcard or usb stick for datalogging inserted: as soon as you plugin the sdcard or usb in such system, the (max two days) of storage in the device will be transferred to that stick.

@mvader (Victron Energy) Hi Matthijs, glad to see that you are constantly improving your products! While having a look on your latest RC firmware, I've seen that you have been working on "AC loads" assignment option. Well, I've been thinking, If you are having that on agenda, wouldnt´t it be a nice idea to make the phase assignment of ET112 possible as well like it is eg for PV inverter data feed in? I think it would be more straight if the register assignment could be changed inside ET112 via Carlo Gavazzi software but as far as I know it is not possible. So doing such a maping on the GX device is definately not straight forward but it would be a nice to have feature instead of forcing ET112 to L1. Best regards, Matthias

@mvader (Victron Energy) Hi Matthijs, is there already any roadmap regarding this feature? Please let me know. Thanks, Matthias

Downloaded the version and the large flavour (as I use NodeRed). After making my normal modification I do have two issues that I did not have on 2.72;
- The digital inputs are missing (all of them)

- The relays are missing (all of them)

Maybe an issue on my side: The backup option does not seem to find the USB stick (used to add the 'large' version)

I did notice the PageSettingsRelay.qml is slightly different so will focus on that first in trying to find the relays back.

Testing on a RaspberryPi 4

I want to try and keep the Venus OS beta threads to not be cluttered with Pi-specific things.

one little issue. When I try to change the CAN Bus settings Venus OS crashes. The change is made, after a reboot the settings a correct, but still a bit surprising.

This behaviour was also present in the version before. I use the large image on a RPi4 if this is an information you need.

Thanks for your great work!

Kevin Windrem · Sep 16, 2021 at 07:53 PM
I've experienced this on occasion also. It isn't repeatable. Most of the time the change just works, but every once in a while the system crashes.
Share ·

I'd be very interested to hear if that happens on pi-s only, or someone also sees it on other GX devices.

And if it happens, what the log says. And what does crash mean exactly? That it auto-reboots?

the RPi is totally frozen (GUI and console), no auto reboot. Where can I find the logs? If needed feel free to log into my Pi.

Hi, ok then probably Venus OS itself keeps running, but the gui gets stuck.

Changing the can-bus profile causes the gui to call a script to change the baudrate. This is the code:

So my first thought is that the gui might get stuck for you when calling that script.

and /data/logs/gui/*, and in the commandline manual for Venus OS I've detailed how to easily look at those.

When gui is stuck, and logged in via commandline, run svc -t /service/gui to restart it; of which the doing will help confirm that indeed its the gui that is stuck.

Ps. what I'm hoping is that some savvy linux users from the community here help out on this wrt rpi. There are far more test systems out there with a GX then with a Pi, and no complaints from a GX: hence Pi.

switched to beta and back to 2.73 because ESS works really bad in beta.
With new firmware we are buying 0,4kwh per hour from grid (setpoint -50)
with old one its not perfect but most of the time zero as you can see in the pic

@mvader (Victron Energy) Hi Matthijs, I think there is an issue with the web-dashboard. The recent RC 2.80~17 does not update the web dashboard in realtime properly. It often hangs and shows old and sometimes weird data. When I refresh the web application it shows current data for the fraction of a second and then reverts back to old data which is then shown for at least a few minutes without change. I wasn't patient enough to wait longer. When I boot the Octo GX with firmware 2.73 this issue disappears and comes imediately back when booting with 2.80~17. I think I have seen this issue as well with earlier 2.80~nn versions but didn't investigate it in detail at that time because of the announced v2.73 detour. Best regards, Matthias

mvader (Victron Energy) ♦♦ · Sep 24, 2021 at 01:38 PM
Hi @Matthias Roetzer , @N-DEE , @gnagflow and others: we found and fixed in a regression related to the VRM dashboard live updates no longer working. The problem was introduced in an earlier version of v2.80.

Having the VRM Dashboard open could increase CPU usage of the GX Device significantly, due to a bug. And on some devices this would overload it, at which point the live-feed feature disables itself, and so forth.

Fix is in v2.80~19. Lets see by then how well it works; we still have to compare actual CPU use between v2.73 and v2.80. For now we just fixed / optimised the vrm dashboard-induced CPU load as much as we could.

mvader (Victron Energy) ♦♦ · Sep 24, 2021 at 01:34 PM
Hi Romain, thank you. It could be related to the issue as reported by other, which is that the VRM dashboard live updates no longer work. We have a fix for that finished and we'll launch that for field testing soon.

So: once I release a new version, please test with that and let me know. Thank you! Matthijs

Thanks for your work Matthijs!