Completely new possibilities with this neat and clear looking Venus HTML5 interface. Always dreamed of something like that

And it saves me from running another screen. On my sailing yacht I have an iPad Pro 11" serving as a display for almost all devices, gauges etc. running the jack of all trades App WilhelmSK (WilhelmSK is a highly customizable boat instrument display that uses the SignalK protocol (http://signalk.org) to show information from your boat's sensors. It even can display html web) fed from two RPI's (one with Venus, the other with SignalK hooked up to boats Raymarine SeatalkNG/NMEA2000 network). I already could show all Venus values. But with the HTML5 app this goes now a major step forward and saves real money if you only think about the costs for the Empirbus NXT MCU (needed for Raymarine MFD integration)...now it's like all values and gauges in one place. No need to change apps anymore.

Yes, and the App also has a full working remote console :-)

Thanks very much to the dev-team! 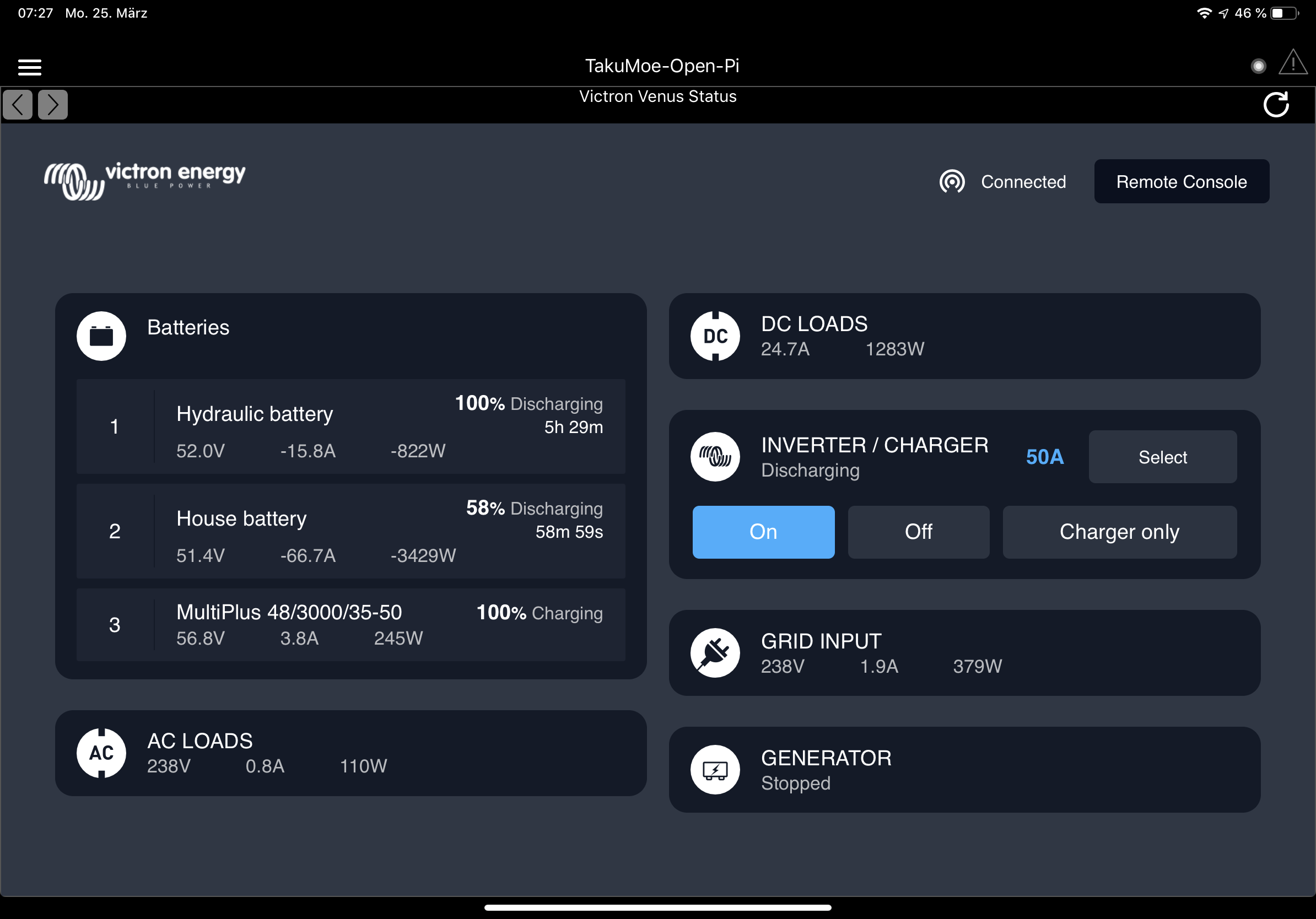 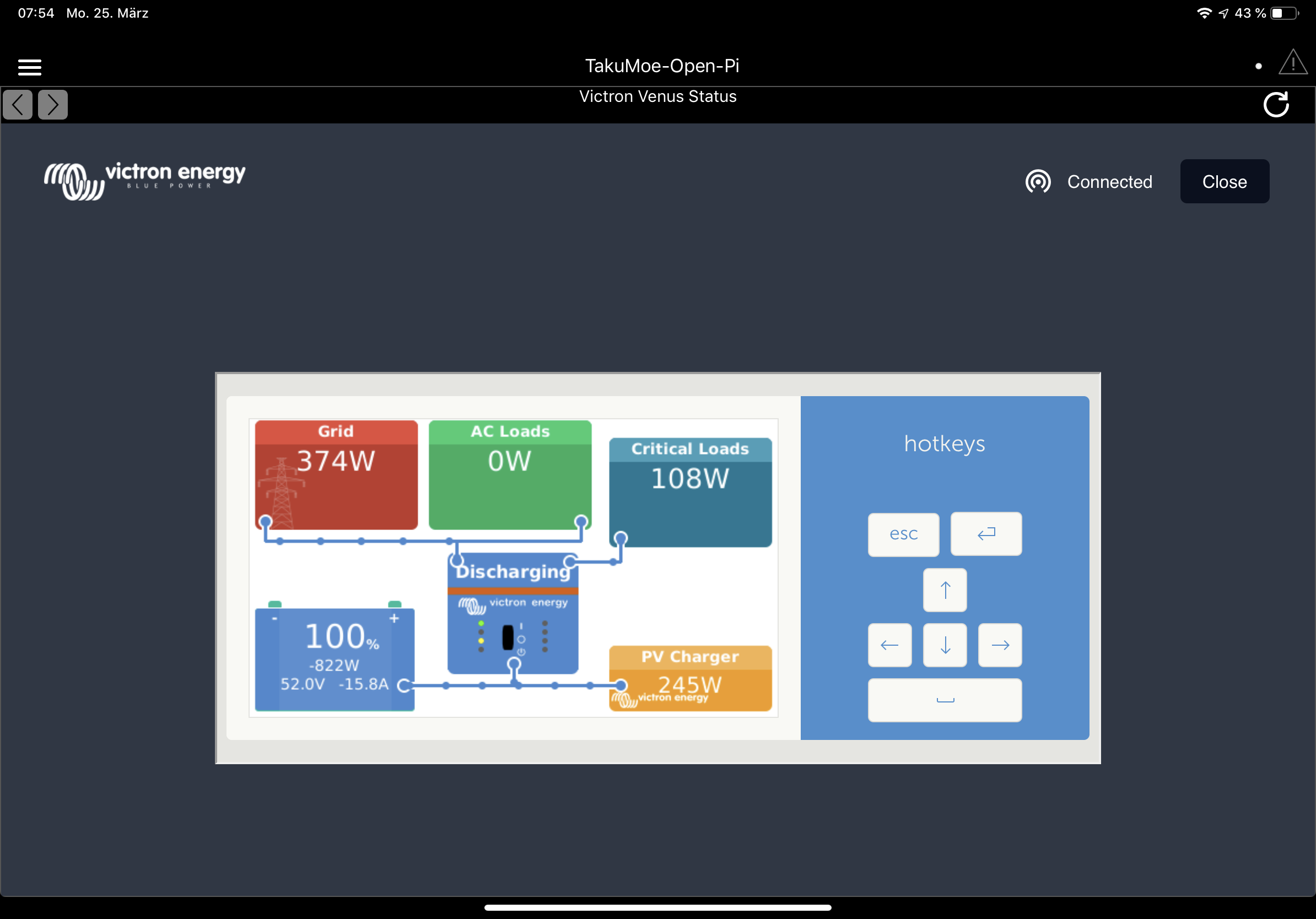 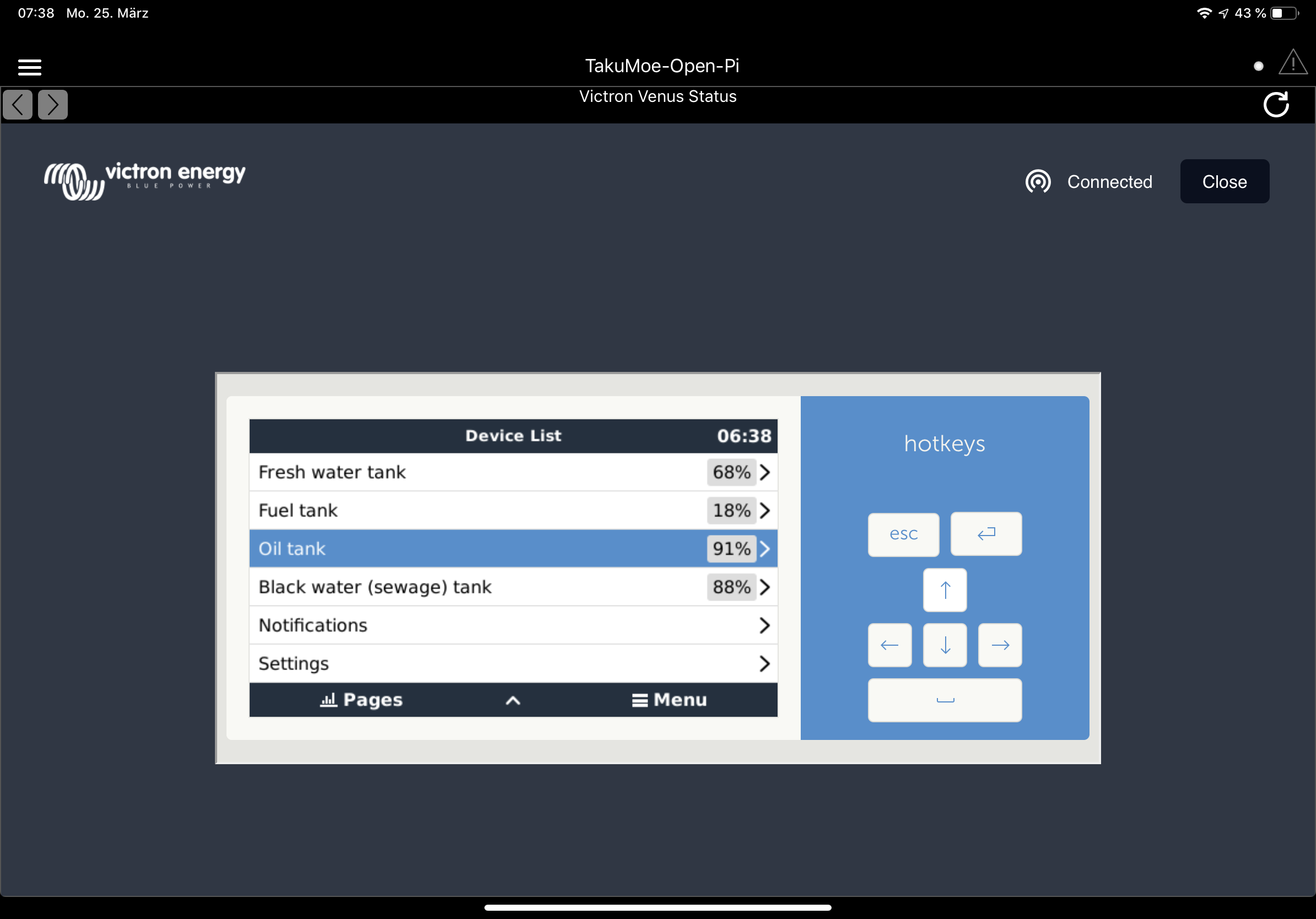 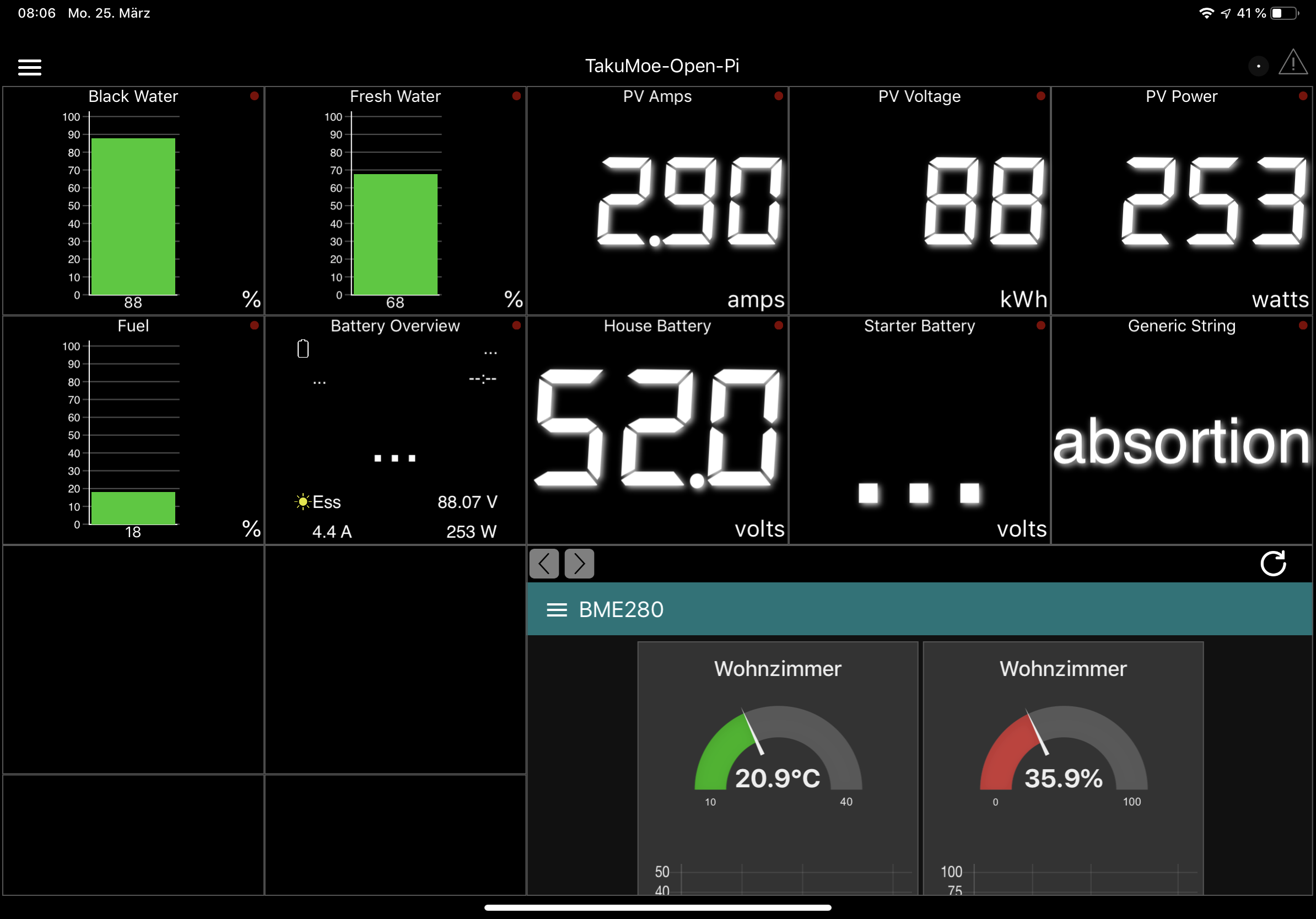 Do you know what system you're using to monitor water level?

Though something is not right with your PV voltage units, showing kWh!

I am very excited to see the next generation of system interfaces that people begin to build around this super flexible html5 system.

Would it be possible to get photos of the physical system setup? One that includes the iPad and the boat?

Ooops, will look into it. Not sure who is reporting the unit. Could be SignalK, but guess it's coming from WilhelmSK. Should be an easy fix.

Totally agree. Really a big step forward and I am curious to see other interfaces as well.

Not sure if you want to see photos from the PI's. Currently the setup is running in my living room, but will be hooked up into the boat end of April. The electrical values from the Victron Pi are from the demo within Venus, all other values are from real sensors like BME280 for temp, humidity, pressure, two Sonoff smart switches, a couple of 1W sensors and a MCP3008 ADC for the existing tank level sensors.

The Sonoffs needed to be flashed with a different Firmware. But basically all sensors are plug'n play, thanks to Openplotter.

The system is ready to be installed except for the MCP3008, which needs additional programming and probably an ESP32 Wifi so that I don't have to do all the wiring to the existing analog tank level sensors.

I had no pre experience with all this kind of things. Just a bit of Linux from its very early days decades back in time and I have studied electronic technician though never worked in this part of the industry. Therefore I think everyone can set something similar up with a bit of reading.

Here is how it all started and how I get inspired: https://community.victronenergy.com/questions/9879/building-a-raspberry-pi-with-venus-os.html?childToView=9986#comment-9986

And here a brief explanation of how this all connects together:

Boat has Seatalk1, SeatalkNG, NMEA0183 and NMEA2000 (two Raymarine MFDs, Radar, Wind, Depth, Speed, Watertemp, Airtemp, Pressure) connected to a Shipmodul 3e-n2k multiplexer. The multiplexer converts to NMEA0183 and sends the data via a router (Teltonika RUT 950) - 4G, Wifi) to the Pi, which runs Openplotter (and with that SignalK Node server and kplex) and some other useful stuff. This Pi has all sensors connected, except the Victron devices. The Victron devices (Multiplus, MPPT, BMV) are hooked up to a 2nd Pi (because it requires a different Linux..), which also connects to the router. 1st Pi reads data also from 2nd Pi and ALL values are then converted into SignalK or NMEA2000/0183, whatever I need to feed the system. That's it. The iPad connects to the 1st Pi through WilhelmSK and magically (well, it needed a bit of thinking and help from the developers) all the different values showing up - in one place.

Yesterday I set up VPN and SignalK cloud. Means I have full access to ship data even when not aboard and also can control devices or switches through mobile. When underway, there is no way to send data to VRM. Instead I have setup influxDB and Grafana as a graphical interface for collected data.

I will make a flow chart in the coming days for a better visual presentation. And detailed photos coming as soon as the system is installed. 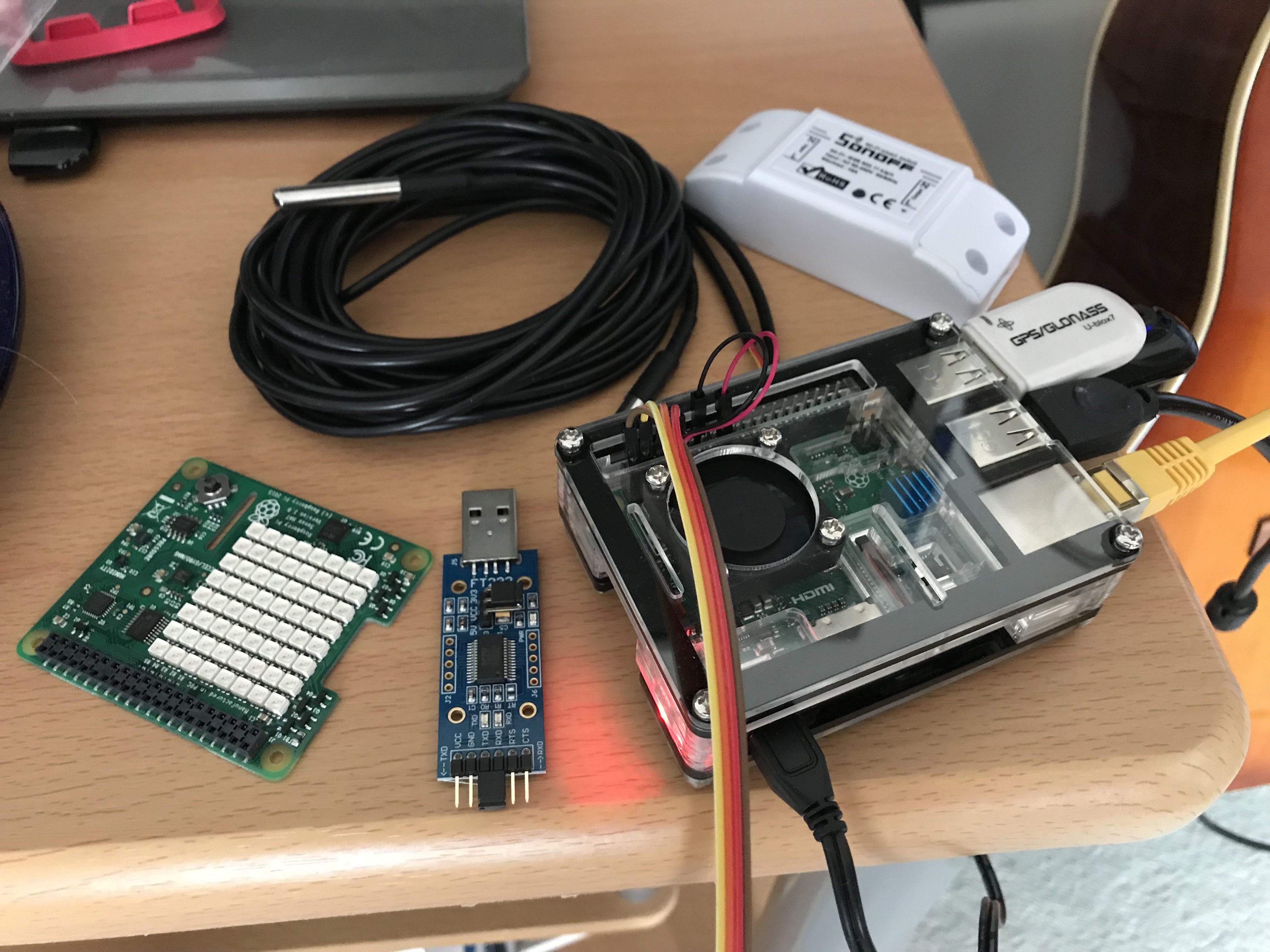 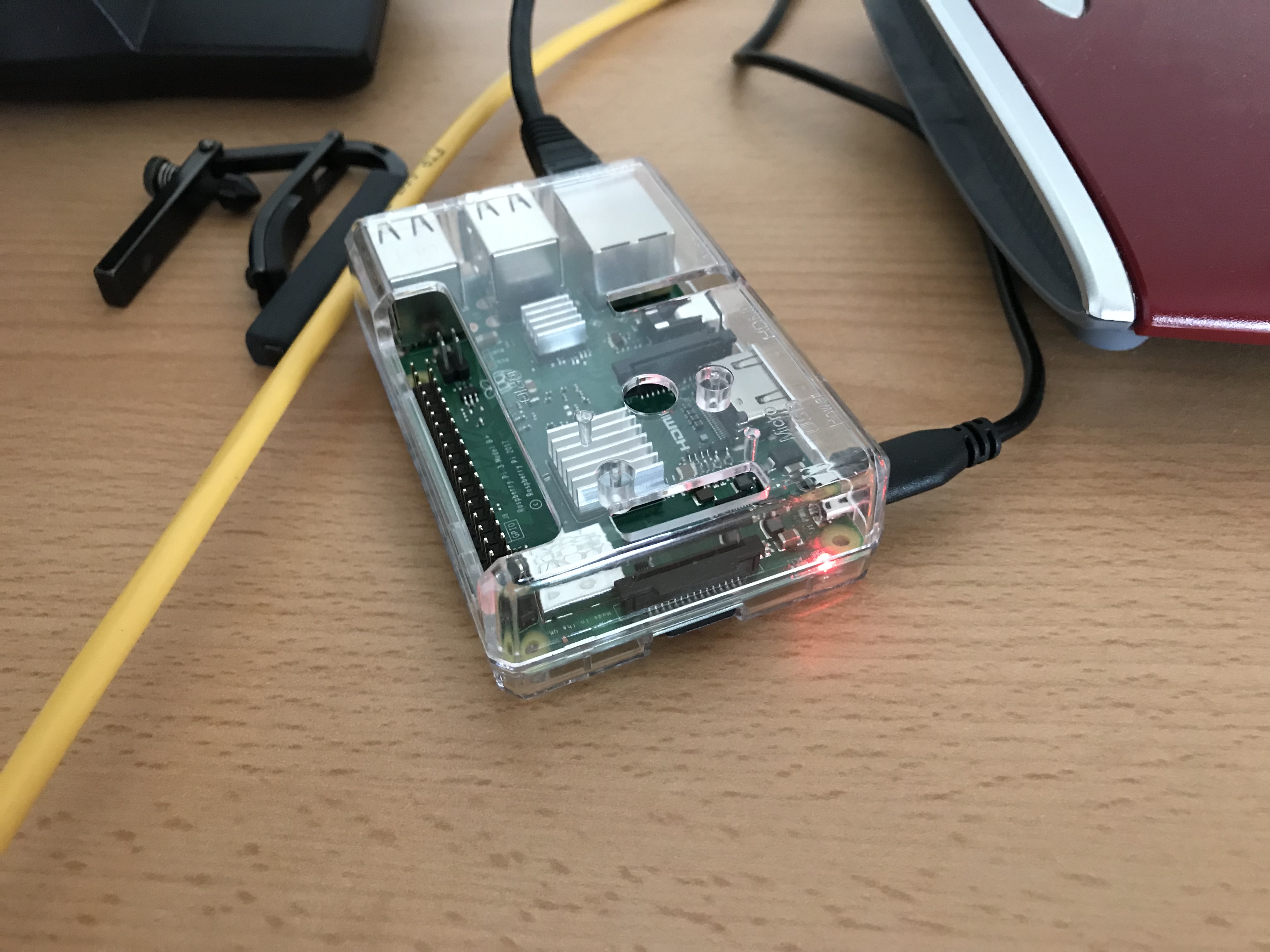 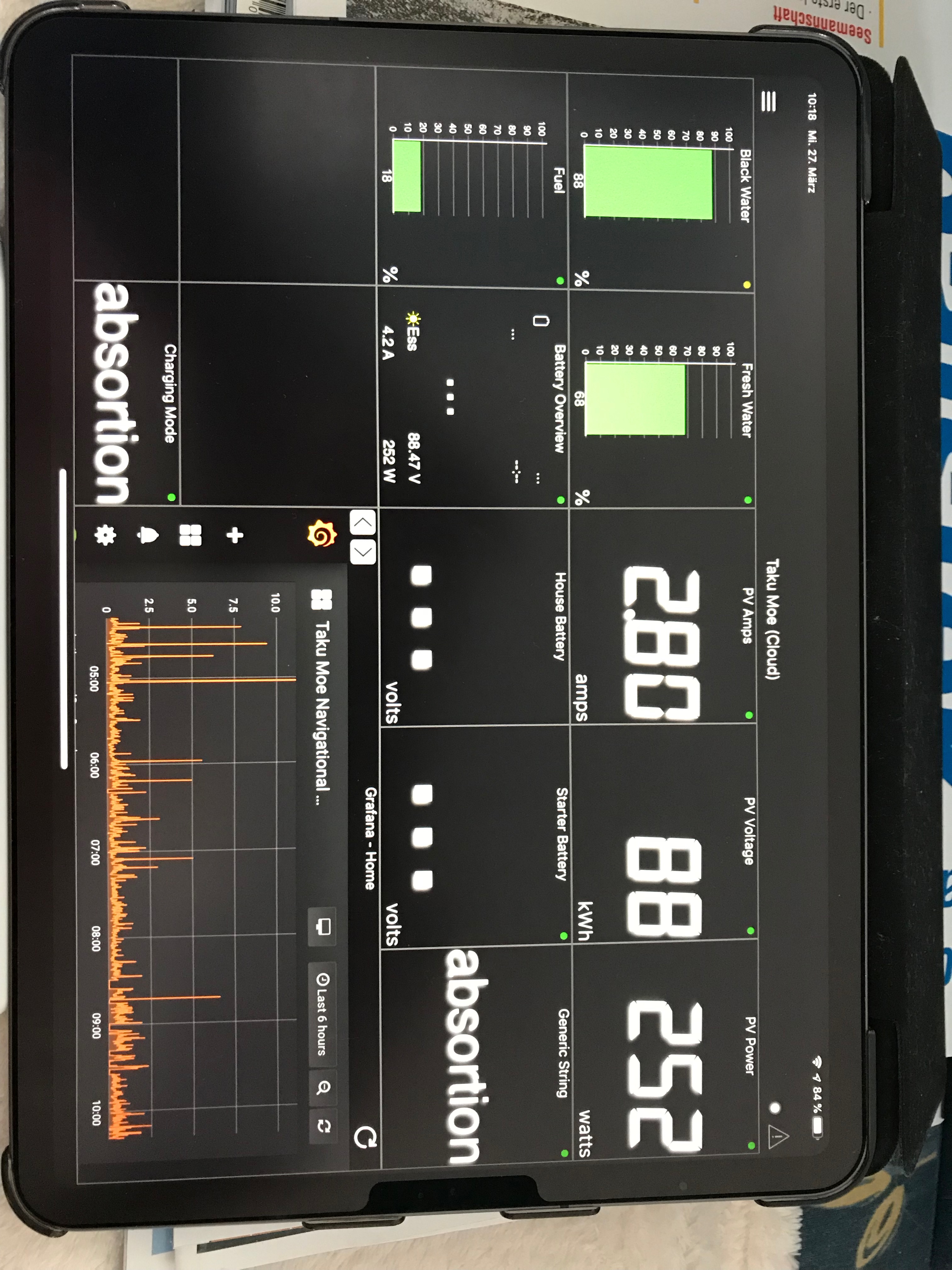 Amazing to see all those different protocols and interfaces integrated into a functional system.

Very nice work! It's a surprise to read you don't have much experience in this area. Seems you are a natural.

To be honest, I always was a computer geek, rather than into knitting. But more on the theoretical side. That sure helped. Surprised myself tho ;-)

I wonder why the Battery Overview is not showing your battery info?

You can go into the gauge options, click the button to the right of "Path:" and then select the paths for the individual items in the gauge.

Yes, I wondered myself until I realised that there is more than one battery in the Venus demo setup. There is a big number of Venus SK paths. Not easy to find the correct devices ;-) And should filter them through a white list for less bandwidth.

And desperately searching for a way to change fonts for the values just like it is for title and units...

ps. It should be "Absorption". Its coming through SK server. 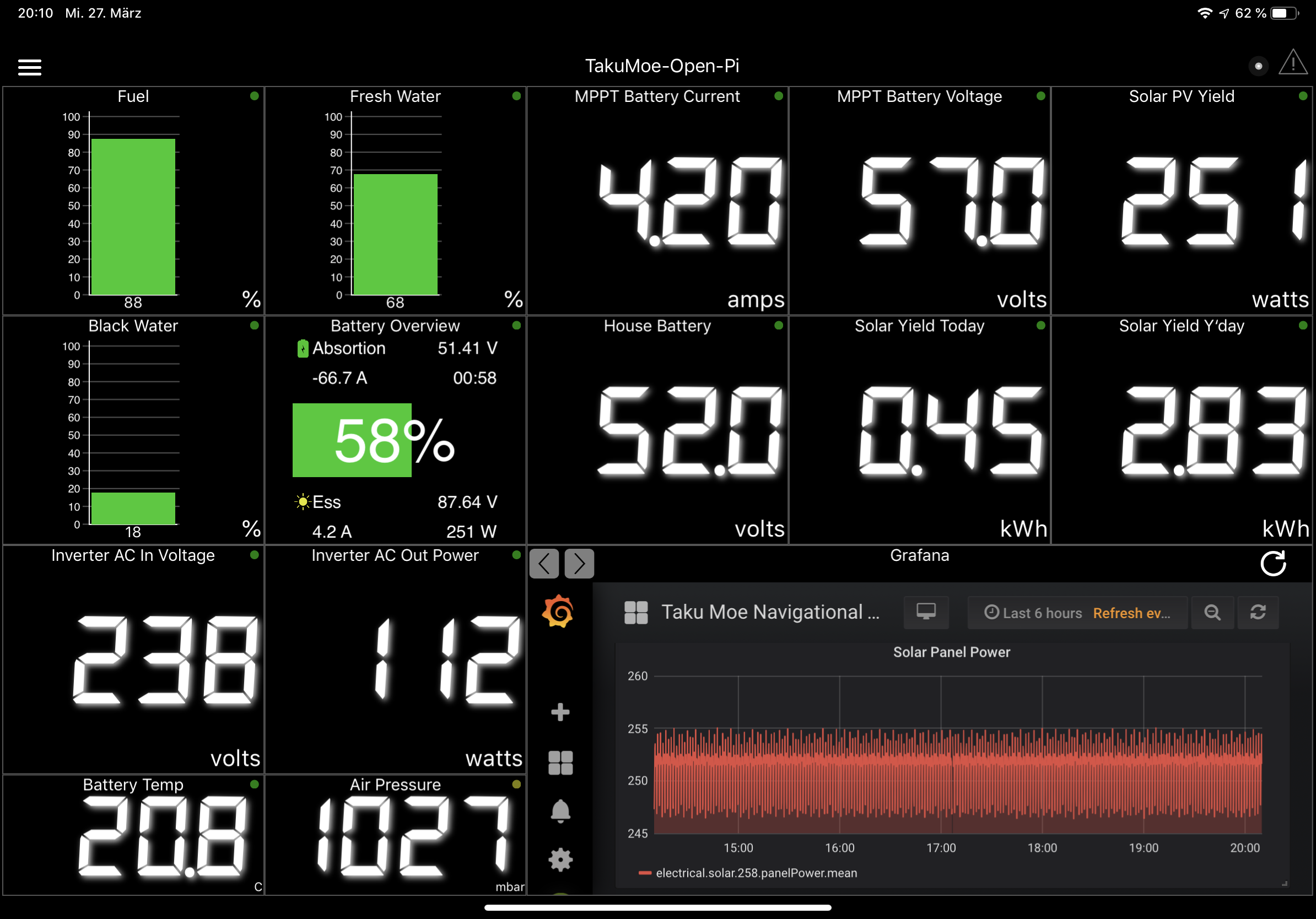 Hi, neat stuff. As I keep the Victron blog your system would make a great follow up blog to the one I did a year ago:

If interested drop me a message via Facebook on my boat page and we can talk. https://www.facebook.com/ElektraYachts/

Is it possible to make wilhelmSK read directly Venus, without need to have any raspberryPI ? I have now wilhelmSK connected to boats N2K through YDWG2, and it is wonderful system. If Venus would be in same ethernet as ipad, i believe it should work. WilhelmSK has already Venus as one connection presets. I am not at all as linux-minded as Stefanie.

10 People are following this article.

HowTo: Use a HDMI Screen with USB Touch Panel and USB HID Buttons on a Raspberry Pi running Venus

Add shortcut hotkey to start generator on Any screen

Getting Started with the new Venus HTML5 interface

How to: Quickly update RPI Touch Screen configuration on new SD card or after version update.

Wireless remote inverter on off switch