I know that it is ridiculous that we still use Fahrenheit in the US and the rest of the world uses Celsius. That said, there seems to be at least some provision from Victron that allows this to be switched and I would like to figure out how to do it. I have switched it everywhere that I think I can but still have mixed results. The VRM (mostly) works in displaying F over C but even then, there are bugs it seems. You'll notice that my sensor "Inside Temperature" is in F so that's good:

However, if I got to the advanced tab, sometimes it's in F and sometimes it's in C. Note that the Shunt Temperature Sensor is in F but the Battery Summary is really in C and just appends the F after the Celsius value. What's even stranger, if I wait 10 or 15 minutes, the Fahrenheit value will magically appear in the Battery Summary. Go back to the Dashboard and then back to Advanced and it shows the Celsius value again and you have to wait for 10 minutes for it to change:

Finally, I can't for the life of me get the console to show it correctly ever. This is the most bothersome for sure. Since most of the time I won't have internet access, I installed the rather pricey GX Touch 50 to display what is going on at a glance. I was planning on adding sensors for my fridge and freezer after adding the Victron Energy Temperature Sensor for GX Devices for ambient inside temperature as well. However, I simply can't get Fahrenheit to display on either the remote console from VRM or the actual GX Touch 50 so I'm holding off on that for now. Intuitively, I would think that you would select the temperature sensor from the device list and change it in the setup as shown but there is no provision for that.

There is a provision in the app shown here (this is an older screen shot, I am running the v5.41 and still having the same issue): 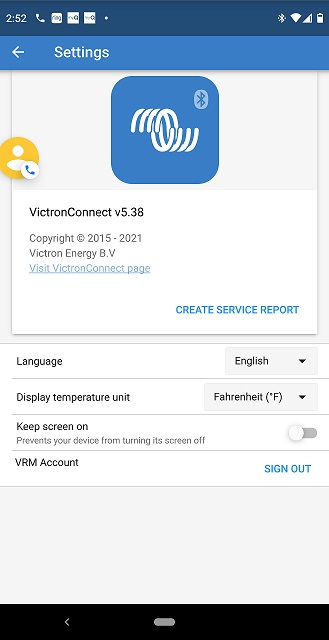 I've searched this forum, the Facebook forum, called tech support at a US dealer and I simply can't figure out how to get F displayed on the Touch GX. Is this simply not a feature for the Touch GX? Is Fahrenheit only available in the VRM? At a minimum, I think there is a bug in the VRM as shown above with the Celsius value stamped with an F after it in the Battery Summary. I've been really satisfied with all of my Victron components otherwise. I have to imagine that there is a way to show Fahrenheit on the Touch GX though. I can't be the only person on the planet with this issue so my guess is that it's me! If anyone can provide step by step here, that would be amazing! Thank you!

My GuiMods package adds the ability to choose the temperature scale for display in the overview pages. It does not change the values displayed in the device list menus however.

My VRM appears to display Fahrenheit properly without a 10 minute delay.

Well, I did some more digging and found something. This isn't good news. I've determined that at best, if you want to use Fahrenheit with the Victron Cerbo GX and the Touch 50 that you're going to have to make sacrifices as it does not work properly.

I found this thread that describes a workaround:

First, you must get super user on the device. There is a link in this thread and it's easy to do. Then you use an offset of 32 degrees and the scale factor of 1.8 and you'll see say, 25 degrees Celsius can be converted to 77 degrees Celsius. That isn't a typo, it is the value in Fahrenheit but uses the Celsius unit instead of Fahrenheit because it isn't really a fix, it's a workaround. In other words, Victron has a bug(s) in the code that is preventing.

So, here's how that looks once you apply the workaround. It's 67 degrees Fahrenheit in the van but it shows up 67 Celsius. Ok, I can live with this I thought: 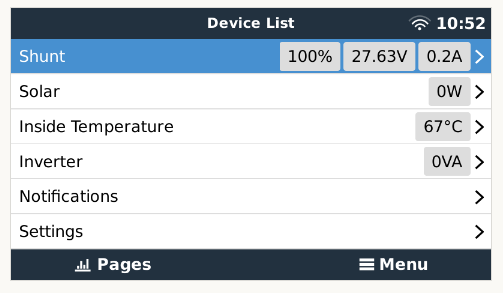 However, now lets go back to the VRM pages:

Now it's 152.6 degrees? Ah yes, it's the actual temperature in Fahrenheit, times 1.8, plus 32 degrees because of the workaround on the temperature sensor to make it look right on the Touch!

I know, I'll just change my VRM units to Celsius too and fix that right?

Wrong! Now all the other units are in Celsius too! Well, how's it look on the app? The app uses it's own units and that looks good on my shunt: 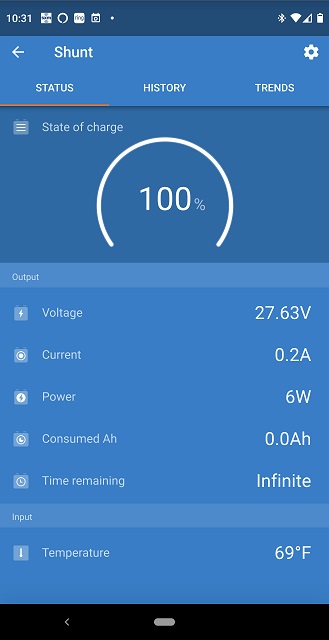 But it doesn't look good in the VRM still from the app:

I get that there probably wasn't extensive testing for Fahrenheit when this was developed in a European country but they intended for it to work or wouldn't have put the feature in. I am disappointed in the Cerbo GX/Touch 50 combo for sure. It was more than $500 US and I would expect that after as long as it's been on the market that this would have been addressed by now.

Bummer! I heard back from Victron today and there simply is no solution to make Fahrenheit work properly at this time for the Cerbo GX/Touch 50. If the workarounds above work for you, then you're set. Otherwise, at this time, there is no solution to this problem for the foreseeable future. Maybe they'll work on it, my guess is it's very low priority because Fahrenheit is only used in the US and a few island nations. Still, I feel a little duped by it all to be honest. There was clearly a provision intended for Fahrenheit and it simply doesn't work properly. That's a defect in the code and I'd certainly like to see it fixed.

FYI, I did hear back again today after my follow-up email. I was told that imperial units were a high priority because of Victron's growth in the US market. That's great news for folks like me that would like to see this working. There is so little on the internet about this topic (from what I can find) that I just want to keep this thread informative for folks that might be searching for answers. With any luck, we'll see this fixed in an upcoming release soon. Fingers crossed!

Anybody know when this is going to launch?

It's 1.5yrs later and still no Imperial Units? Come on Victron, pretty please!?