Skip to main content
This question was closed Jul 21, 2020 at 09:21 AM by mvader (Victron Energy) for the following reason: Other

A new beta test version available: v2.60~19. It has multiple bug fixes, and completes our work on GPS-es: Venus OS can now read GPS data from an NMEA2000 network, a nice improvement.

In case you haven't already, make sure to read the posts of the previous v2.60 beta test versions. There are several significant improvements in v2.60. The highlights are the addition of a feed-in limit, added ethernet-connected energy meters, updates on the NMEA2000-feature (addition of tanks), as well as many other improvements with regards to tank monitoring.

Note that there still is the same known issue: the new Ethernet-connected energy meters can't be configured; this will be fixed soon.

Other reported issues in v2.60 testing are still being- and/or will be looked into.

Hi, noticed that I can't change the AC Input 1 or 2 (Settings->System setup) to Generator or Shore power, only available options are Not available and Grid. All four options are visible but all of them can not be selected.

But when I revert the version to v2.53 the same lines look like this

Hi @Eero Silfverberg thank you for reporting this. Issue found and we'll release the fix in the next test version.

in this release (19) the canbus usb adapter does not work anymore, so it can't detect my pylontech battery. I manually tried to reconfigure (instructions here: https://github.com/victronenergy/venus/wiki/RaspberryPi-CAN-Interfaces ) but no success. Going back to ~16 fixes the issue for me.

To help with troubleshooting:

- strange: CAN interface only receives frames after a command "ip link set can0 up type can bitrate 500000"

- bad: Victron Console does not recognize the battery, does not see CAN devices

I am sure my config is okay as I used 1:1 the same one from the v16 backup, files were restored after firmware upgrade because they were lost.

Hi @teemischer, thanks - though unfortunately I don't know what the issue could be. Since its raspberrypi, its community supported. You or someone else from community will have to dive in a little bit deeper. For example:

- is the can-bus-bms driver running OK?

- does replacing that can-bus-bms binary with the one from a previous Venus OS version fix it?

1.. you can’t turn off the mppt for maintenance purposes...

via victron connect, I’ve reported this back thru the beta feedback ...version 5.21 (4)

Hi @Mark I'm missing the context I think. Is this when using VictronConnect Remote features?

my system (Cerbo) has updated to v2.60~21 and now I have a blank remote console on any device (mac, iPhone & Cerbo monitor). But all other things work. It communicates the same way as before and the "Advanced" screen shows me all informations like before.

Any Ideas how to proceed?

Thanks a lot in advance. 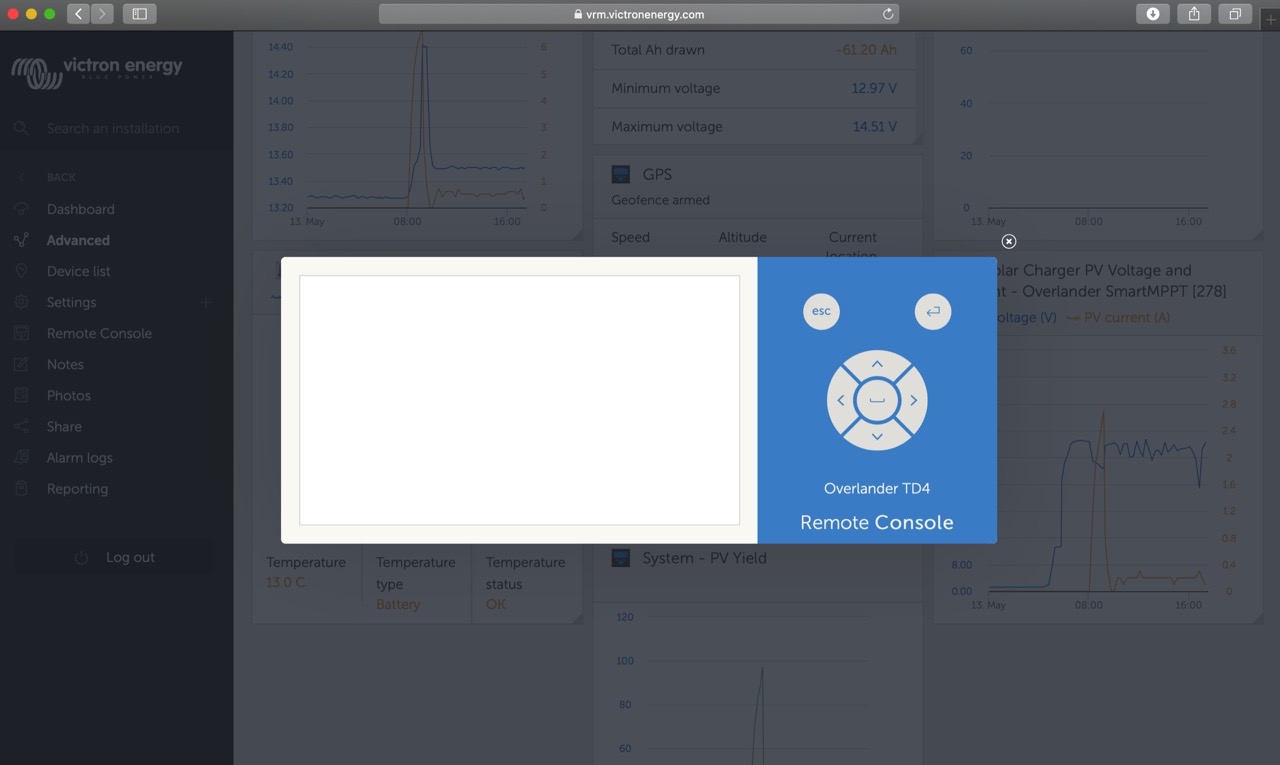 Hi Adam, yes sorry. We had a version with an issue in the candidate feed for a few hours today.

Its replaced by ~22 now. That fixes that.

is the Cerbo configured for automatic updates? In that case, reboot it, and after approx five minutes it will check for- and install the update.

Sadly not configured for automatic update. And that seems to be my problem. I‘ve read in the manual, that even for an USB update, the remote console is necessary.

Fixed through Remote Support! Your system is now running v2.60~22 - see other post for changes.

Thanks for participating in the test program.

And, my apologies again. That bug should not have slipped through our quality checking of release candidates.

Fantastic! Thank you so much for this awesome support. I love your products. :-)

Although we have Battery and it is never empty these days, we buy about 750w of power per day.
Are there plans to improve the grid connected operation (more speed to reach grid setpoint)?

Not in the near future; no.

Any possibility to set these timings somwhere in the code on my own?
I'm using cerbo which has more computing power.

not really, most if the limitations are in exchange of messages between inverter/charger, energy meter and the gx device.

oh what a pity :-( well lets hope the best for the future.
maybe you can add it to the "wishlist" :-)
thanks.

When using v2.60~19 there is an issue with the 'starter voltage' incorrectly appearing in the BMV menu when 'mid-point voltage' is the configured aux usage.

I see "Fix bug causing the Starter voltage reading to appear and disappear continuously with a SmartShunt or BMV. Thank you Lucian for reporting." in the change log - however with my system the issue did not exist in v2.60~16 and now does now with v2.60~19...

Thanks Mark, we’ll check what goes wrong there

FYI I just noticed that the same issue also exists in the VRM battery summary widget. 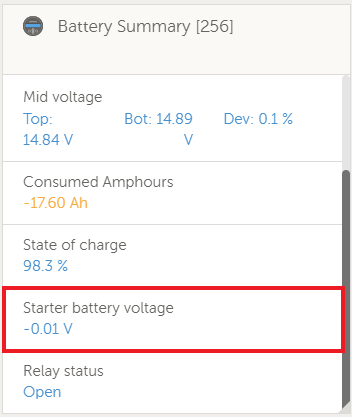 found & fixed for next test version. Thanks @Mark

How to install nginx on CCGX?