Skip to main content
This question was closed Aug 16, 2020 at 09:43 AM by mvader (Victron Energy) for the following reason: Other

While I'm writing this, Venus OS v2.60~14 is being uploaded to become available for testing as a release candidate. This message lists all the changes - which are many.

The previous v2.60 version available for testing was v2.60~4. And after that, public testing was interrupted by v2.51 to v2.53 but development continued, see below change log for the result.

With regards to planning, there are a few more changes pending for v2.60, and there after its mostly (field-) testing and fixing an issues found. If all goes well, we could release within a month, or so.

I recommend to also re-read the change log of v2.60~3 and v2.60~4, since that has been quite a while. It has various significant improvements, on of them being the addition of a new energy meter, the Ethernet connected (!!) Carlo Gavazzi EM24-DIN.AV2.3.X.E1.X, which we'll be stocking as well, and many more changes. 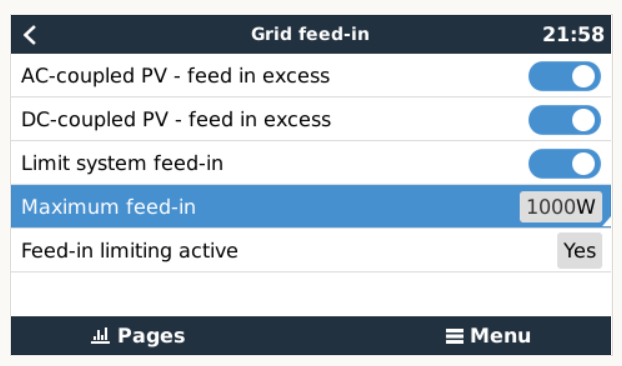 (available under the "Standard: US/EUR/Custom" setting. 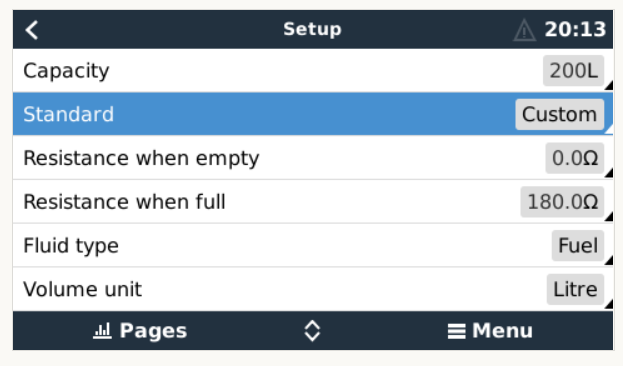 The left column shows the level as indicated by the sensor, the right column shows the true tank level. The 0% - 0% and 100% - 100% points will be added automatically. In below example, the tank is square from the buttom up to 50%. And then becomes smaller, since 10% sensor-level increases only make for 5% actual fluid-level increases, and thereafter slightly bigger again. 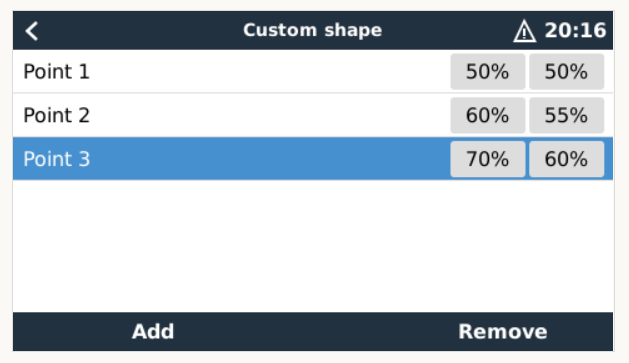 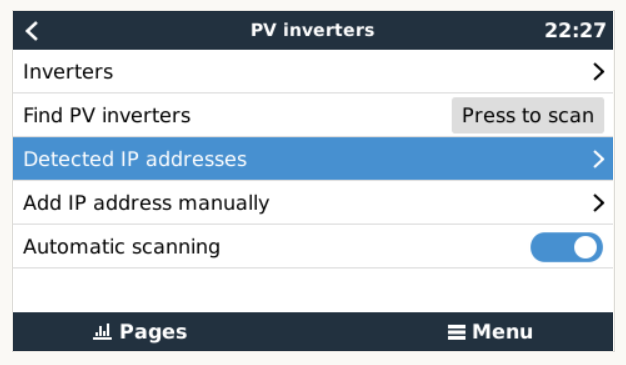 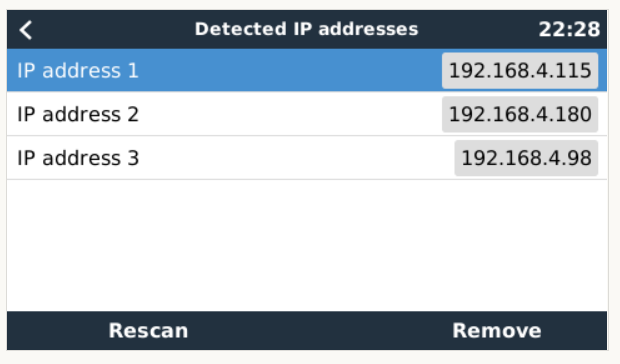 I'm getting consistent ESS Battery Status Codes #3 & # 4. They usually appear together around every 4 to 6 seconds and only stay on the screen for 1 or 2 seconds.

Everything appears to be working fine.

Hi Mike, is it ok if we log into the system to see whats going on? What is its name or id? (you can use a private message here on the forum to send it to me)

UPDATE: this was found & solved.

@mvader Hi, The firmware works fine for me, however I have an issue with the Modbus 485 cable it will only work with the yellow wire removed. This first happened in v2.52 for me, but it could well be me changing a setting in modbus or something.

Hi Dale, that would be really strange, for something electrical like what RS485 cables you connect and don't connect to be affected by software. You could try install v2.50 again, to see confirm indeed that then you can connect the yellow wire.

But for I'd say its more likely that somewhere during the updates also something else was changed or broken.

I can't think of any settings that affect that either. The yellow wire on the USB-RS485 cable is one of the two RS485 signal wires, and they both need to be connected for proper operation: together they form the signal.

Hi all, we found an issue in v2.60~14: there is an issue with PV Inverters measured with a Carlo Gavazzi Energy Meter. the software can't read its settings, and works off the defaults. Causing them to show and be interpreted as grid meter by accident.

v2.60~15 will be available soon, fixing this. There is no need to change any settings now, once your system updates to v2.60~15, its fixed. If you do change settings to fix it now, also no harm done.

Yes i noticed this on version Ver 2.60.14, i wondered what was happening to my test system.

Has this any effect on the PV inverters all being combined into one power readings now ?

As i have a Fronius inverter and another brand of inverter on the system using a Carlo Gavazzi energy meter on the output to monitor it on the raspi CCGX.

Hi. I dont know what the effect is; we’ll fix the bug - what the exact effect is is not really important in my opinion.

Hi
Also combines the Energy PV meters with the Fronius PV inverters all as one so you can't tell what inverter is producing what power etc. And the AC loads are combined with the battery loads now, they are all added up now.

OK done that, yes the analog settings came back. But when you reset or reboot all the settings disappear, Time setting, ESS, DVCC,Energy meters etc. Reset all the settings again then reboot or power down, and all settings gone again, very odd, as

Ver 2.53 is OK reboot power down settings all remain intact.

It looks like Ver2.60.15 has corrupted the system somehow?

I will have to do a image reinstall again to see it that corrects it.

This has never happened before when upgrading the software to newer version.

Just a note that all I/O -> Analog Inputs were disabled after upgrading to this release. Also the individual device settings (fluid type, capacity, sensor resistance US/Euro) were lost.

I love that these are being sent out over the NMEA2000 network. Thanks!

I noticed that it is possible to name the temp sensors. However, those names do not show on the device list like they do for the water levels.

Hi Kai, what version were you running prior to updating to v2.60~14? One way to see that is in Settings -> Firmware -> Backup firmware.

Hello, yes, I also noticed Analog I/O setting were lost. My prior Cerbo was v2.53 updated through USB stick. Digital I/O were fine.

I have a higher version than you. mine is the testing version.

Hi Rob, sorry but no. you dont have a higher version. All v2.60~14 builds are the same. The builddate/time differs slightly, thats because they are built one by one: Cerbo, then CCGX, then Beaglebone and so forth.

regarding using the “testing” feed: I’d really prefer you to use the candidate feed, and not testing.

After installing the release candidate,it reset my WiFi,and switched over to the gx gsm.it won’t allow me to reconnect back to my WiFi,it keeps coming up as failure.

I have tried this thru the gsm and connected locally to the venus device with no success!

Hi Mark, hope you're well. Can we login? Which of your systems is it? Matthijs

Thanks Mark. We'll look into it

(for internal: I made an issue for this)

Hi Mark, we logged into your device and checked. The WiFi is extremely unstable on v2.53 as well. Very poor signal. It has currently switched to GSM with wifi "failed" now.

So the problem doesn't seem new to v2.60

the changelog for this version says: Rework the implementation of the grid alarm. No functional changes.

after updating, I am unable to get Grid alarm ModbusTCP info in register 830. Did you change it?

Hi, yes, you need to use a different unit id now to query that. No longer 0 or 100; but the same as the vebus service. I’ll update above change log; thank you for noticing this.

I confirm changing the Unit ID to my Multi works fine. I will update if any other issue found.

My brand new system works fine and I'm happy with the extension to configure custom min and max resistance values and rename the tank sensors. So I could add my car fuel tank. Perfect.

- Will it be possible to do the same with the temp sensors for future? (f.e. for car coolant temp, or hot water boiler temp).

- Will the smart sense be involved for future? My Cerbo does not use the smart sense information out of the network, although the BMV and MPPT ist working with it and I can see the temp on my mobile phone, but never "over the air" reading out my Cerbo.

Sorry, for my bad english.

Hi, naming of temperature sensors. Yes that will be done.

With regards to the Cerbo using the Smart Sense: no, thats not on any near time agenda.

Just upgraded to 2.60~14 and expected to see the new tank functionality.

I was prepared to update my tank repeater for the custom names but do not see them anywhere. All I see is the multiple choices for fluid type.

Thanks for any clarification.

The good news is that the changes for Tank Repeater (and also my Mobile overview enhancements) don't conflict with anything added/changed in 2.60 (so far anyway).

Go to tank setup and go to custom change from there.

the GUI will allow custom naming for all tank services that support doing so. See line 33 of PageDeviceInfo.qml on your device.

I looked at settings.xml and could not find the tank fluid type for a NMEA 2000 tank which is saved through a reboot. I'm not sure where that tank info is being retained in non-volatile storage. Anyone know? (It's not important but would be interested in knowing how things are non-volatile without being in settings.xml.)

I was able to get custom names working for my tank repeater including non-volatile storage.

Hi, my Venus GX cannot find uptdate 2.60. Latest ist 2.54. Is it possible do download anywher and install with SD-card?

Within a few days we'll start field testing v2.60 again. In the mean time I do not have the files available, I'm sorry.

And when will these "few days" pass? Monitoring of tanks was gone

i have a "security" question,

what will happen with all the solar power?

this question , because i have much more pv power than what my battery can take in.

Hi Kristof, our inverter will regulate by increasing the frequency and thereby reduce output power of the PV Inverter. To discuss further, please ask a new question in the general section of community: while I like to help with all systems and questions, I really need to focus here only on Venus OS field testing related discussion.

Dear Mathijs I use now for couple of years Hall base DC current sensor from a German company.

Value is read by a Alba Combi and put on the N2K bus . Raymarine MFD can display DC current and voltage

Very nice people to work with