Does GX firmware 2.80 have a bug with respect to MPPT connection to BMS?

My Venus updated to 2.80. The power went off, and now my MPPTs do not work. Error #67 no BMS. Same thing happened to a customer at the same time (3 am in the night). How do we fix this?

Dear all, today we released Venus OS v2.82; which fixes this problem.

Full details for the release are in the change log, see https://professional.victronenergy.com..

Symptoms of the issue included MPPT Error #67 - No BMS, and in case no AC in is available even an inverter shutdown.

mvader (Victron Energy) ♦♦ commented · Feb 08 at 01:50 PM
ps. I accepted this answer to make sure it shows up on top. And lastly: thank you again all for the reports and help in getting this sorted quickly!
0 Likes 0 ·

I have 5 systems at the same time having this problem this morning.Another one with no problems is v2.71

Thanks for reporting. This is being checked by Victron.

In case anyone else has this issue, I resolved it by resetting to factory defaults and putting settings back into the MPPTs. Error 67 went away.

Oliver commented · Feb 02 at 12:56 PM
In that case you removed the Mppt from the BMS control. No external control will happen. You can xcheck by pulling it's communication cable. It will not stop the charging. Whereas it should do so on external control loss.
0 Likes 0 ·

Hi both @scoraigwind & @kwunhung is it ok if we login remotely to those systems? Thank you, Matthijs

Is there some way to block this automatic upgrade of firmware? I did not like the power failure in the middle of the night.

Daniël Boekel (Victron Energy Staff) ♦♦ commented · Feb 01 at 11:17 AM
Hi @scoraigwind automatic update of firmware is -not- a default setting, it has to be enabled by user.

*some older systems might have had it enabled by default, but that has changed a couple of years ago.

You'll find that option in the firmware settings on your GX device. Go to Firmware/Online Updates/Auto Updates and set it to Check only.

Yep @scoraigwind, you can turn off auto updates in the GX. 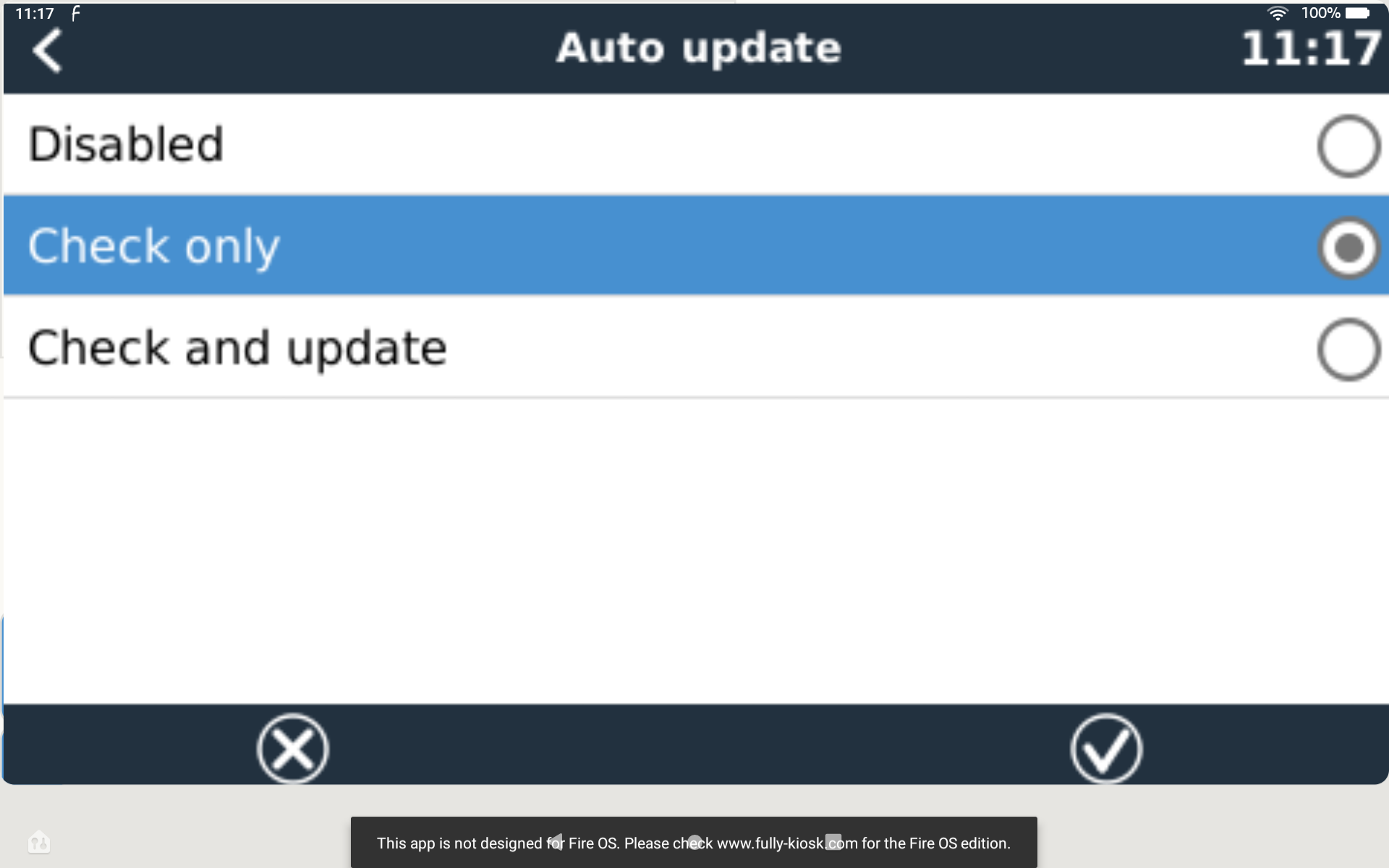 Perhaps you can share what specific batteries/BMS you are using?

Many of us have been beta testers and did not spot this issue, and my installs seem to have updated fine with Pylon/BSL, so would be interesting to know if this is specific to a BMS or a more general issue.

Thanks for all the input. I am using BYD batteries, older B-boxes. It is good to know that it is possible to revert to the older firmware, but now I fixed it I will stay with 2.80.

I wonder why the inverter shut down? That is very annoying. If the inverter has to shut down for the GX firmware upgrade then it should not be done automatically in the night.

This is not normal at all. Likely the lack of BMS/comms resulted in the battery shutting off.

Darth Vader will get to the bottom of it.

Those of us that beta tested must have been through nearer 30 updates, with minor issues along the way, none that severe.

raymiller nickdb ♦ commented · Feb 02 at 12:20 AM
I also had a power failure using MulitPlus2 and Pylontech 2500 24V system during the manual updating of the OS and as you stated this is very unusual. The power outage was not inconvenient for me but not expected, for an update where a power outage is expected would be good to have prior warning.

But I did note the system Pylontech BMS now has control of the charging MPPTs without me doing anything. So no problems.

Thanks to everyone for all the hard work that goes into programming updates.

It's pretty normal for electronic hardware to have to shut down for an OS or firmware update. Windows, Linux, IOS, MacOS, Unix all need it at times. The issue is control. And that's done by notifications or allowed to happen automatically. So more a case of awareness than shortcomings.

Sorry it caught you, there was a huge amount of testing, but as always some bugs slip through. Lets see what they find caused the problem.

mvader (Victron Energy) ♦♦ commented · Feb 05 at 07:28 AM
Hi, yes, the shutting down of the inverter is a safety feature: it didn't get any comms from the BMS anymore, and as such no longer knew what state the battery would be in.

Thank you for the extra details @scoraigwind , also others that posted. It helped.

Test version that fixes this is available, see below post.

This issue affects systems that have a can-bus connected BMS, like a BYD or Pylontech, and at the same time have another battery monitor, or the inverter/charger itself, selected to be the main battery monitor in Settings -> System Setup. 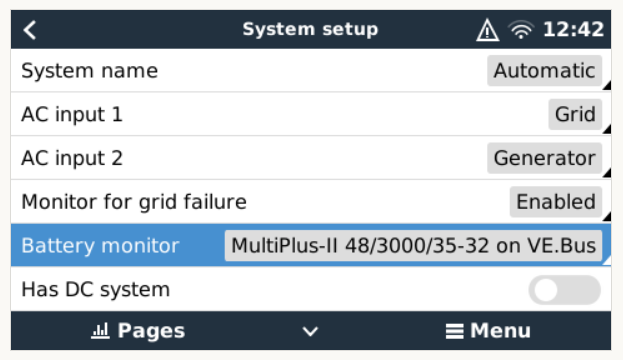 In such configuration, the GX would "underwater" control the Inverter/charger and MPPTs with data from BMS and at the same time use data from the other selected Battery Monitor.

Per v2.80 we changed this: when the BMS is not selected to be the main battery monitor, it no longer uses its information to control anything. It doing so before lead to (other..) issues, hence the change.

This change explains the Error #67 and the Shutdown of the Inverter: they were being controlled by a BMS, and then after the updated to v2.80 no longer received BMS data. In that case a safety feature kicks in, shutting them down to make sure they are not charging a battery while the BMS for example died or was accidentally disconnected.

There are a few immediate solutions:

1. Select the BMS as the main battery monitor in Settings -> System setup.

Now with above as the bare facts, I do understand and can think of a few reasons to want a BMV installed next to a BMS, one being that the SOC of the BMS is not accurate enough - even though a bit "corner cases". We're internally looking further at this - and welcome to post why you have such setups;

I saw one system with a CAN-bus connected BMS where the inverter/charger is selected as the battery monitor: why is that?

And several systems with CAN-bus connected BMS, and a BMV at the same time - and it selected as the main battery monitor. Why?

scoraigwind commented · Feb 01 at 01:54 PM
hi and thanks for the explanation.

Please could you tell me how to revert to the old firmware, so that I can have this working the way it was before?

choose the option next to the older version to re-enable it.

mvader (Victron Energy) ♦♦ scoraigwind commented · Feb 01 at 08:42 PM
understood - I've accepted my own answer- hope that is ok, to have it come on top for anyone else looking for this information.

It's a painful decision

raymiller commented · Feb 02 at 12:30 AM
I use the BMV712 for the SOC as the Pylontech U2500 24V is very inaccurate even when I have adjusted (overtime) the BMV charge efficiency to match the real-world battery performance.
0 Likes 0 ·

Hi all, an update: we’re planning to fix this. I expect a fix to be available as a beta version in 1 to 3 weeks.

It would be great if you can help test that and confirm it works allright for such systems.

Meanwhile, I recommend to use v2.73. Thats the best work around.

My apologies again - we underestimated how many systems are affected by this.

Hi all, we have released beta versions v2.82~1, which addresses specifically this issue (CAN-bus connected battery such as BYD or Pylon + BMV or other battery monitor). It would be great if you could test the new beta version and confirm that it fixes the problem for you.

We tested it extensively, and works well. Both on systems with an extra BMV or other battery monitor, and systems without.

But I got confused and installed 2.81 instead. My inverter crashed and I got error 67 on the MPPTs again. So I went back to 2.73 for now to keep the lights on in the house. I am figuring out how to do the beta test version. But I am also struggling with another issue that I want to resolve first.

I cannot access the remote console in ethernet any more. I have a customer with the same problem. He is on 2.81 and he cannot get into his remote console. Even though I went back to 2.73 I still can't get to my console. I have to go via VRM. I wonder if you can help with this problem first and then maybe I will try beta testing the beta release on my system? How do I get to remote console on ethernet. I can see it is connected and I use the correct address but cannot find it.

scoraigwind mvader (Victron Energy) ♦♦ commented · Feb 05 at 04:38 PM
I got it working by rebooting my laptop. Sorry it took me a while to think of this solution. Maybe I will try the new beta version but not today. Enough excitement.

Wrt testing v2.82~4, so far so good - besides ourselves also two other systems tested it and all good so far.

38 People are following this question.

SmartShunt with VE-Direct to RPi Venus and VE.Smart Networking to MPPT ?