Why would my System go off when plugging in the VE.Can or VE.Bus?

Hello, I am using a Victron set up with BYD batteries. I have a ccgx with Quattro 48V|8000va|110amp. I have 2 BYD Boxes with a total of 20kW. The system had been working great since early 2020 and recently it started shutting off randomly with now errors recorded. So I read on the forums that some had issues when the VE.Bus going to the inverter would shut the system down when plugged in. So, when I could not get the inverter to turn on at all even with a reset I unplugged the VE.Bus network cable and it turned right on. I live in Zambia so I did trouble shooting with my supplier from South Africa over WhatsApp. We went through many different scenarios. We unplugged everything from the back of the ccgx and left the power cable connected and shut off the supply of power from the solar arrays. With the VE.Bus plugged in and connected to the inverter the system now came on. When I plugged in the VE.Can going to the BMS for the BYD the system again shut down. I connected everything back and whenever the VE.Bus and VE.can were both plugged it would go off. But if one or the other were unplugged it would run. I tested the network cable from the VE.Can to the BMS and it seemed to be okay. I swapped BMS's as both BYD boxes come with one and so I had a spare and it did the same, shut off. I tried with just 4 of the eight batteries and set the fuse addresses to the correct setting and it still shut off. I tried with just one battery and it still shut off. At the end of the day before the sun went down I connected everything back together and surprisingly it worked perfectly fine with VE.Can and VE.Bus plugged in to the BMS and Inverter. Now it has been 2 days and it is working fine. I just want to see if anyone may know what was causing my problem in case it starts happening again.

In a normally operating system, if the managed battery sends a discharge current limit (DCL) of 0A to the Victron system, then the inverter will go into a low power state (and looks like it has turned off).

Disconnecting the VE.bus cable disconnects that 0A DCL signal, and the inverter will start up again based on acceptable battery voltage.

In a lithium battery, just because the battery voltage is acceptable does not mean that the battery is happy and willing to supply loads. There could for example be a cell level imbalance and one cell is very low, while many others are still normal.

You can check if this is the cause (if it happens again) by going into the GX device menu, select the battery, and then parameters menu, 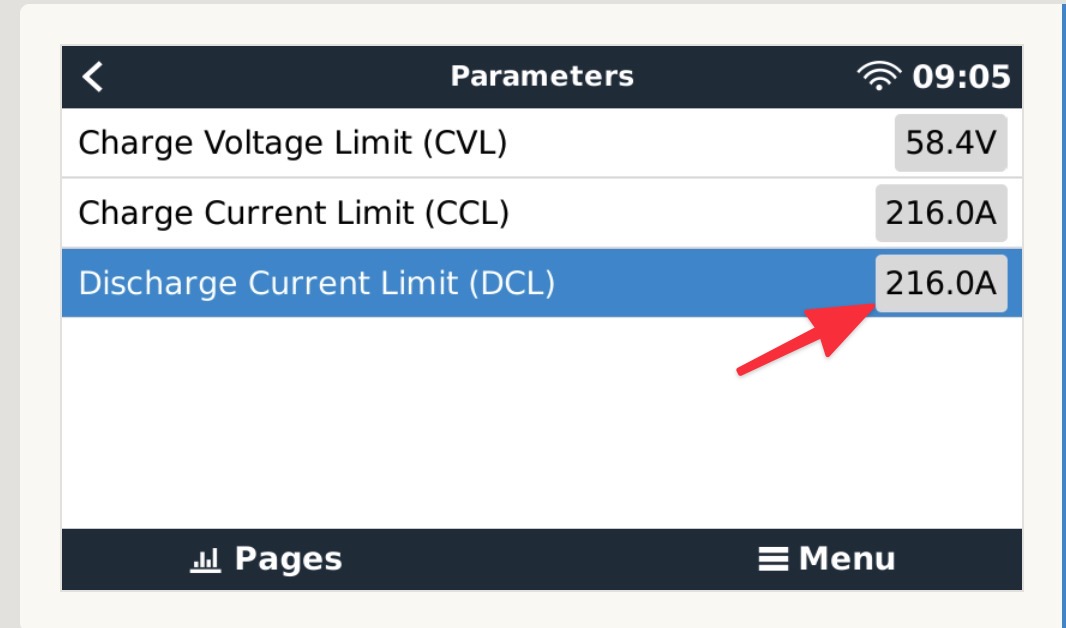 I understand. Thank you for your answer.

Hello, My power went off again yesterday morning for the first time in about 2 weeks. When it was off I went to the screen you told me and this is what it was showing in the first pic below. At the end of the day I went back and checked it and the second pic is what I saw and the power now works again with the VE.Bus plugged in. Do you believe there is something out of balance with the BYD Lithium batteries?

Indeed, the off-state image is showing exactly what I described, a 0A discharge current limit.

There is something at the battery level that is causing an issue and the battery is signalling to the Victron system that it does not wish to be discharged any further and that the system should shut down to prevent that.

This could just be a very flat battery, or a cell level imbalance on the low end. For further information you will need to contact your battery supplier. They can provide you with a cable and software that can provide additional, and more specific information about what is going on inside the battery.

The Victron system is performing exactly as it is being told to do by the battery management system, so I don't see any fault on that side.

65 People are following this question.