Generator on AC-IN-1 with current limit of 14 Amps. All good while loads are low and system in Bulk, charging battery. Current hovers around 12 - 14 Amps. The problem I have is when a large load turns on, the mode changes to "Pass Thru" and excessive current is drawn continuously from the generator. I was monitoring the system when the 3kW water heater came on. I watched the Quattro draw 27 Amps from the generator for 30 seconds before I turned the generator isolator off. This is virtually twice the limit set.

Was going to try the "Dynamic Current Limiter" but the increase in current is not temporary. It matches the loads applied and completely ignores the “AC Input Current Limit”. Also I don’t want it working while connected to the grid.

Please advise if I’ve overlooked something.

What is the battery / ESS state when this happens?

-when the battery is empty / at SOC level set in ESS settings, it cannot draw from the battery for the extra current, and the inverter will switch to 'passthru'

Hi @Daniël Boekel (Victron Energy Staff). Thanks for your answer.

When the generator started I had a heat pump running on L1. I thought the bad power factor was causing the current on that phase to be high (approx. 18A) as the voltages between the three phases were quite different too.

Towards the end of the generator run period you can see when the water heating load appears on L2 and the input current runs up round 27A.

AC input current limit in both inverter/chargers is set to 14A.

What is the VRM id / name of the site?

Have you tried if it also happens if the battery is charged further? like 20-30% minimum?

This to exclude the possibility that it is caused somehow by a low battery SOC setting.

Started the generator tonight at 98% with a double oven running on L1.

As stated the inverter/chargers are ignoring the AC input current limits on Pass Thru. Generator input just tries to match the load when it exceeds that being used for charging.

ESS doesn't do this with the grid. It's not the batteries - they are BYD's and I can drag 10kW out of them at 3% SOC. I suspect it is some glitch between the ESS assistant and the system setup - ie with AC In 1 being a generator? I'm running "Other" for a grid code if that has an influence?

sorry for all the questions: have you tried the same with grid input? with the input current limit also at 14A? that would be interesting to know (if the behavior is different).

Don't mind the questions if it leads us to a solution.

Wasn't sure at first how to get the grid to behave like the generator so what I did in the end was to set the AC In 2 current limit to 14A as you suggested and then changed the ESS mode to "Keep Batteries Charged". Turned all PV input off. Battery at approx. 50% SOC. Everything behaved as expected (Very impressive actually):

Draw from grid was approximately 13A continuous on both phases with excess above small loads going to battery. Turned the double oven on which dropped approx. 6kW of load on L1. AC input on L1 stays constant 13A. Balance of power for load on L1 coming from excess on L2 swapping phases between inverter/chargers + approx. 600W from battery. Turned water heater on L2 adding approx. 3kW. AC input stays constant and below the set current limit on both phases. Balance of power for loads from battery.

Decided to test generator while current limits were set at 14A on both AC Inputs. Turned loads off. Started genset. Charging as normal with base loads approx. 500W/phase. Turned oven on L1 and water heating on L2 and immediately all current drawn from generator overloading it. Absolutely no assistance from battery. Logging shows genset current up to 21A on L1 and one instance of 16.4A on L2.

I think I've got it:

your generator is running too fast! it's putting out 51-52 Hz, and by the grid code, the system isn't allowed to produce power.

Try reducing RPM until you reach an average of 50Hz.

That was hopeful, but sorry didn't help.

Dang...can you try even lower RPM?

And what are all the relay assistants doing exactly in the Quattro? Maybe try with only ESS assistant for a moment?

Dropped the RPM some more. Now averaging around exactly 50Hz.

The assistants in the Quattro do the following:

The first two “Programable Relay” assistants toggle the K1 relay above and below 21% SOC. Stops the water heating dragging the battery down below 21%.

The next two “Programable Relay” assistants toggle the K2 relay based on the AC being available at AC In 1. It has a 26 sec delay on it. I use it with the battery charger remote on/off input to stop dragging current from the generator L3 line before the Quattro’s have connected to L1/L2.

The next pair of “Programable Relay” and the first “General Flag User” assistants tell the Quattro’s to ignore the generator input based on the Aux 1 input state. This is there so that when the auto-start command is ended it drops the load from the generator (and the L3 charger) which allows it to run for a minute unloaded before shutting down.

The last pair of “Programable Relay” and last “General Flag User” assistants tell the Quatto’s to ignore the grid input based on the Aux 2 input state. This is connected to the K2 output relay of the Ziehl URF1001E Anti-Islanding relay and forms a secondary means of disconnection from grid should the main contactor on its K1 relay fail to open in the event of a grid outage.

Removed all the above assistants from the master Quattro apart from ESS as suggested and re-run the generator test. No change. The AC input current limit still being ignored. Turned the oven on L1 and had 25A being drawn from L1 of the generator.

Unless you can think of anything else to test, I would appreciate it if you could perhaps get your software people to take a look at the problem. I’m convinced there is some issue between the ESS assistant and the Quattro firmware. This generator installation is useless until the input current limits can be relied upon.

Just to let you know: I've not found anything yet, but have not forgotten the topic.

(and yes, the software guys are involved)

I noticed the same thing today and am also in NZ. I am off grid and have a Quattro 10000 with a Kubota lowboy 6000 genset 5500w 22.9A rated. I have AC input current limit set to 20A. I’ve had assist mode come on when slightly over which tends to drop the input to about 10A and top up the rest from the batts. When operating in bulk mode it sits constant and responds well when I reduce input current so it’s working well in that mode. However today I thought I’d try the car charger to see if in fast charge 6800w I could use the 20A from genset and top up from batts in case I needed to quickly put some K’s in the car at some point. This is when it would pull over 28A from the genset and trip the breaker. This happened twice and did worry me as when we move into the main house soon and we have the 3Kw water heater and some other loads come on it will constantly trip the breaker resulting in the batteries being drained to the low limit setting in the Quattro and shutting down. Power cut and a walk out to the solar array to flick the breaker...

So I’m very interested to see if there’s a solution.

what firmware are you running?

ps. 20A input current limit for a generator that can supply 22A is very high, I'd set it a bit lower.

I set it to 20A as I only get 3800w 16A into the system during bulk and the genset runs smoothly. The system still pulls beyond that setting on pass thru. See screenshot of high house current and the genset pulling beyond the capacity of itself and the 20A input setting. You can see the current steady at the input setting during bulk at the end of the graph 12:35 on. 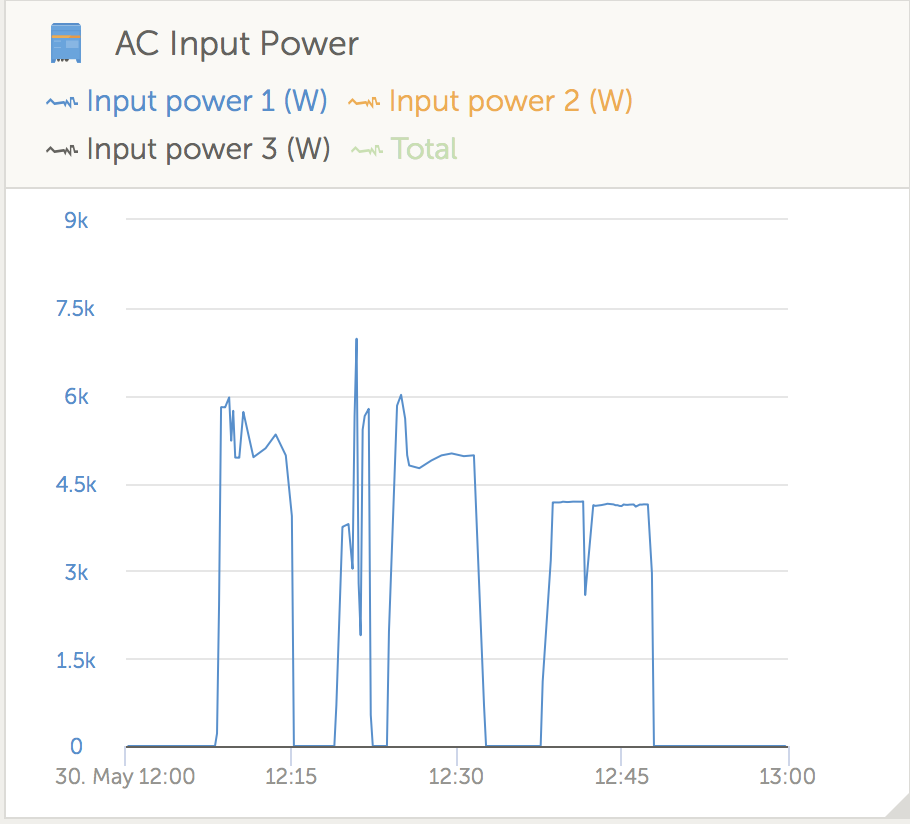 Can you try with the latest firmware? I think this issue is already fixed in that.

Thanks very much. Have updated to FW475 and the pass through stops at the AC input limit and assists from the batteries beyond the ac load. Also I’ve turned off weak AC and the generator and charging runs smoother since update.

I see this is an old thread. I have a similar issue which I need to resolve, but don't want to start a new post as it may be the same / very similar issue.

I have an off-grid site with a single Quattro 48/15 000 and a backup 5kVA diesel genset for getting the batteries recharged if PV has been insufficient. Since the system is running totally off-grid the grid code is set to "Other". This was done since the client might in future add a grid connection as a backup source.

The AC input current is set at the minimum of 14A. The generator connects and delivers to the load and to the charger, however if a larger load (additional 10A) is switched on it ignores the AC current limit and attempts to draw this from the generator. It draws up to 21A from the generator before the generator either stalls or trips out. The Quattro then only takes over the full load. This occurs at any SOC level.

We have tested the generator up to 19A and it stays connected to the Quattro (although it is under strain at that level - hence the limit being set at 14A), but beyond this it either gets dropped by the Quattro or it trips the circuit breaker on the generator.

Power Assist has been enabled and we have tried adjusting the assist factor, but with no noticeable improvement.

At the time of installation the generator was adjusted to be able to maintain 230V output at 14A load. This however meant that the frequency is at 53hz without load and then at 50,5hz with 14A load.

Would a frequency of 50,5hz still be too high? We are still experiencing that the AC input current limit is being ignored despite the generator frequency being 50,5hz when the additional load comes in.

I will try adjusting the gridcode to "None" and report back as to whether it has any effect.

Also not wanting to add a new thread. I have the same problem with a Quattro solution and Generator on AC1, and the current limit not being followed.

How did you resolve your issue...the thread above is not clear on how to solve the problem.

Recommended type of RCCB for Victron Quattro 8000 running with ESS