I am trying to set up 3 phase/2 parallel system based on 6 MP-II.

How to set the master and slave in each phase?

Have you completed the 3 phase and parallel theory and practical training in Victron Professional?

I would be interest to hear if you had and it was still unclear. I could then make some specific improvements based on the steps you think are missing.

Once you have confirmed which units are connected in parallel in master slave to each other, this is how the programming should look: 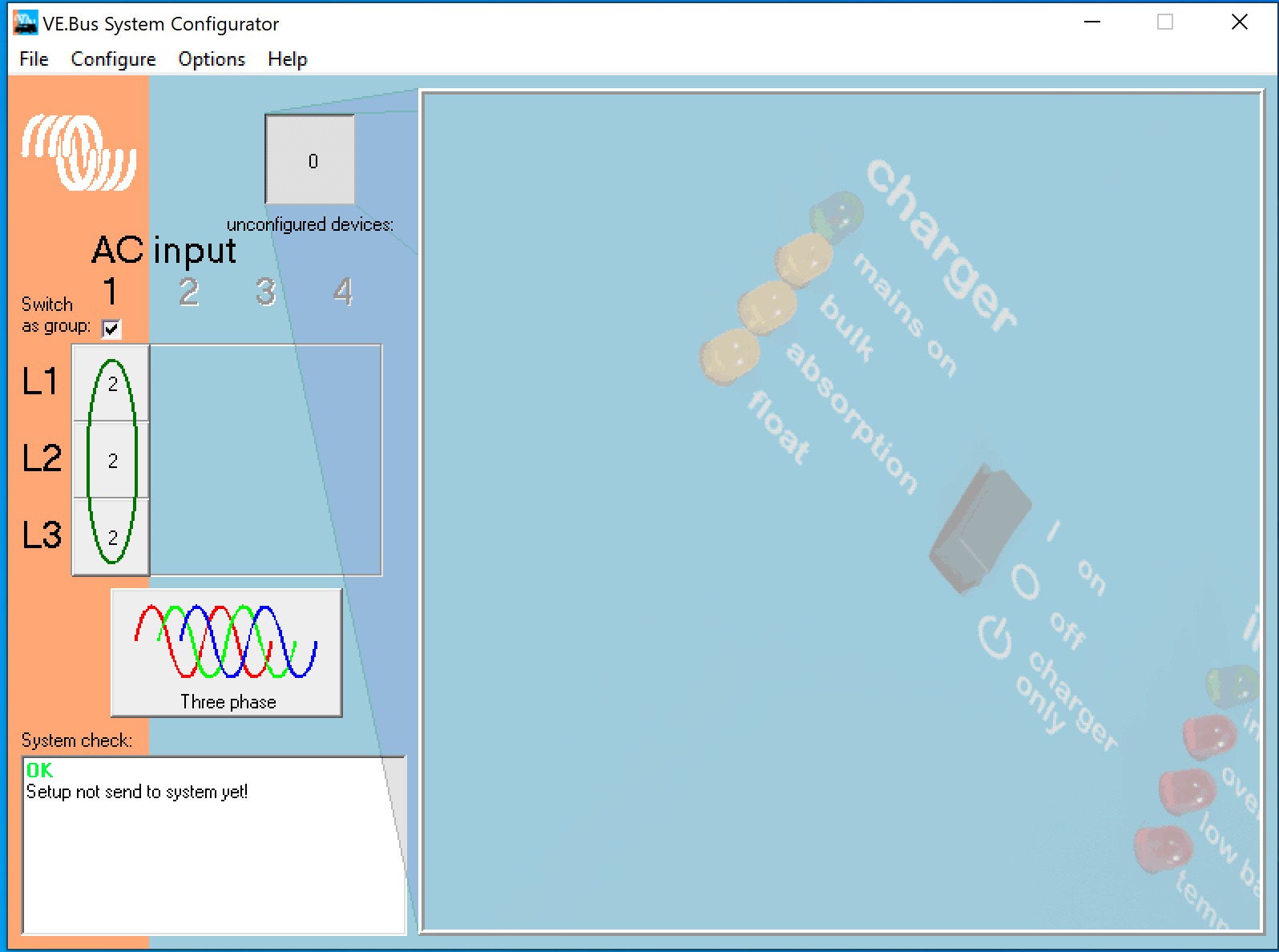 Yes I did completed this training and even got the diploma :)

And Yes, after I moved my MP-II pairs to respected "phases" I got the screen to look like yours.

Your screenshot shows in the "System check" box as "OK, Setup not send to system yet!"

I hope, to finish the setup I have to send it IN. 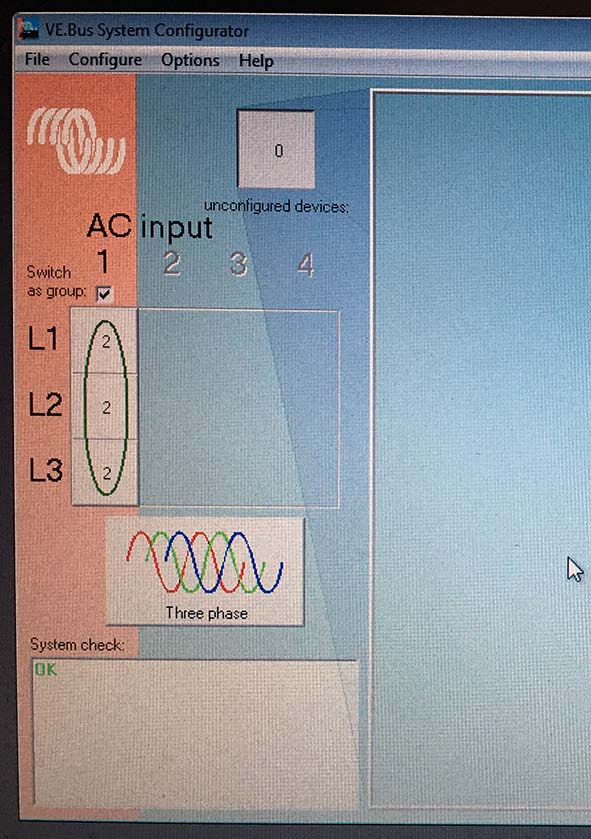 Before I moved them from the right to the phase "boxes", I renamed them to know which is which.

Now when I click on the phase boxes 1, 2 or 3 on the left, I can see, on the right, the units assigned to each phase. 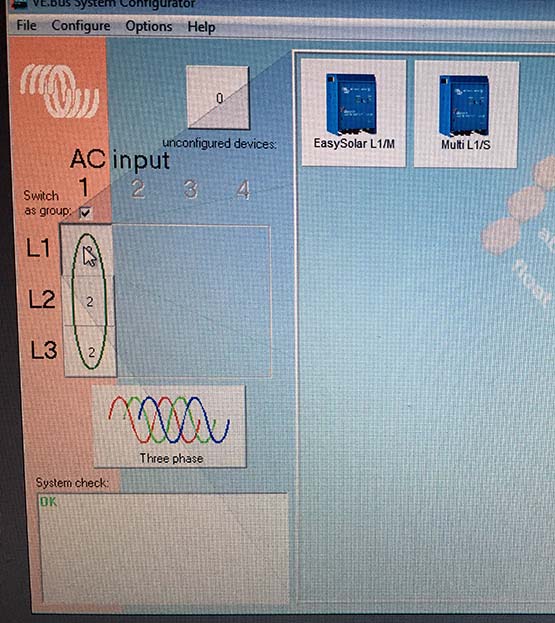 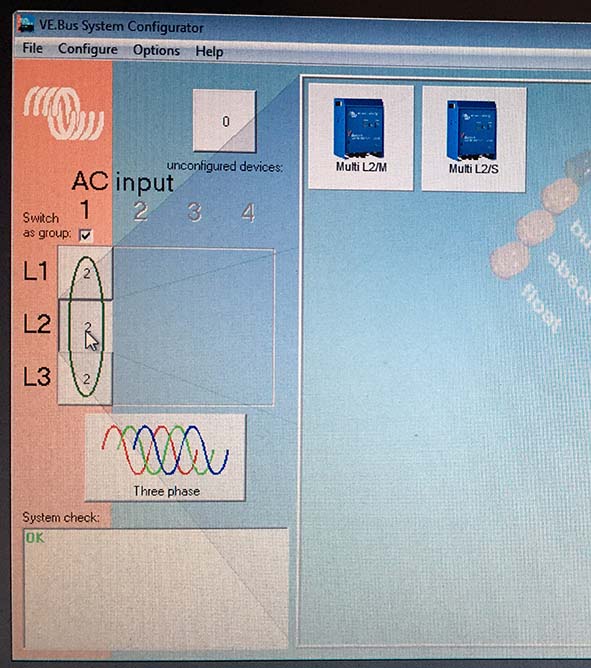 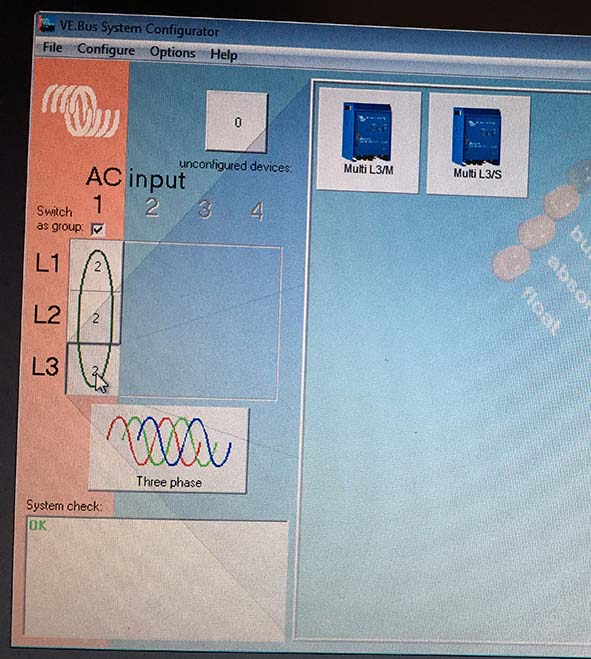 It is not the first time I use VE.Bus System configurator.

I used it first to set up a 3 phase/1 parallel system out of 2 MP-II and 1 EasySolar-II.

Everything went OK than and it worked for 6 moths.

Now I want to add additional MP-II to each phase in parallel because I was getting an overload warnings because a load was sometime over the one MP-II limit.

I even payed (in advance) the Victron installer to do this job, but he came in with new MP-IIs and some needed hardware, told me what to do and went his "Merry Way" to more important clients.

So I did all the rewiring and waited for him to return and set it all up.

He promised to be back in on last Tuesday morning.

Than, on Wednesday, he called that he will come Thursday or Friday.

To be fair, he did not specify which week or month this Thursday of Friday will be. :) (it is not funny)

So I am trying it myself, because in 2 days there will be no power from the grid for whole day due to some repairs.

So far I have all kinds of LED lights flashing on all MP-II (except ES-II because it has no LEDs).

I would have included a video of those LEDs flashing on each MP-II but this system is not accepting my "mov" files. They are quite entertaining.

Here what ES-II is showing in terms of errors.

So, the questions are:

How to make one MP-II a master and the other Slave?

What the heck is this overload error when there is no load connected?

You do not need to choose the master, that happens automatically. I am guessing the phase master missing error is a secondary consequence of the overload.

It’s most likely a wiring issue, but very hard to say where to even start looking.

The wiring for parallel 3 phase is complex, and I would post the diagram, and the photos as best as you can of all connection points to perhaps see where it has gone awry.

I used connectors for making a "Y" connections.

They had a short in them between channels.

As a result, AC-Out outputs on 3 inverters were shorted.

My bad for not testing them.

Thank you for pointing me towards the wiring problem.

Hope after fixing it the rest will go without problems.

All is connected and set up as a 3phase/2parallel.

Now on to the next step, the ESS assistant.