Erratic behavior of 2x Multi in Parallel in charge mode

I would like to ask Victron and the community some help in diagnosing what could be causing this...

I have a 2x Multi parallel setup. They are matched, DC input current is reasonably balanced, measured with DC Amp clamp. In Winter, I have the system inverting by day and switches to GRID and 22h to take advantage of cheap tariffs and protect the batteries. The AC input limit is set on Venus about 14A, as I have around 3.45 kVA available from grid (15A @ 230V).

Recently I have been noticing that the powerassist sometimes kicks in well below this 14A input limit. And the following was an event, 2 days ago, that really worries me.

Batteries were about 40% discharged, and at 22h the system started charging from grid. the AC loads at that time were no more than around 300W and charge current around 35A. All normal.

Now, picture 1 shows when I started the washing machine (~2kW on AC out) at same time batteries were charging. Seems also normal, and is what I expected: 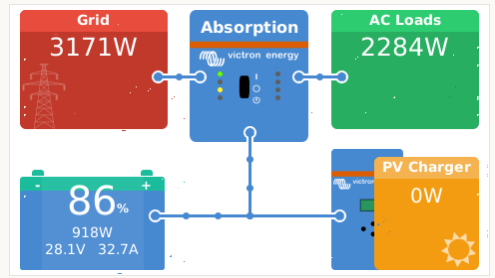 But some moments after I noticed the charge current dropping to almost zero: 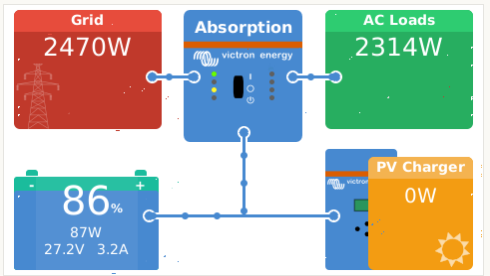 And there was some strange noise in the Multis at the same repetition rate: seemd like charger starting every 3 or 4 seconds. Current droping from 30A to zero and repeating in some seconds interval. But it got weirder, sometimes powerassist also came into play: 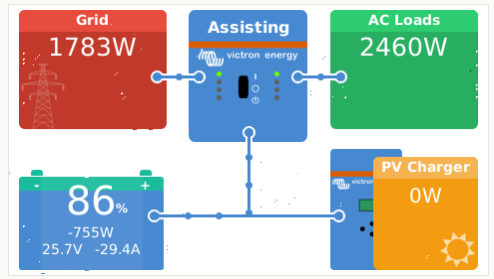 And it went into passtrough sometimes. Here's the complete scenario, until I gave up and stopped the washing machine:

You can see the oscillations in VRM: 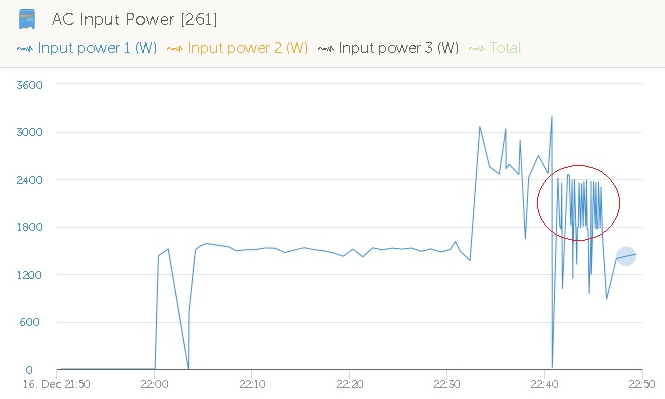 So, if only charging, no problem. But when high loads and charging is needed at same time, it got a little crazy. I have firmware version 459 in the Multis since more than 9 months. Only now I noticed this. It coincided with latest Venus OS but there may be no relation. However, I did notice some strange facts:

1. The currents and power in the Venus OS menu are somewhat suspicious. I assume the power is the "real" power, and current is also "real" or does it take reactive power into account? Because 14.8 A x 233V is much more that 2436W. PLus, I measured with AC clamp, and the meter only showed about 10A coming into the system (common to 2x Multis).

EDIT: this measurement is from a date earlier (2 weeks before) the event above. Input limit was 15A at that time. I was puzzled about which vales are real power and which (if any) also take into account the power factor.

2. Upon the strange event above, I downloaded the configuration of the Multis and checked with VE config, I noticed that only one of the Multis has 7A on the AC input limit. The other one only had 3A set. I find this odd, as like this the system cannot obbey the 14A limit set on Venus OS...

Any help very much appreciated.

EDIT 2: this is the current 2x Multi Setup configuration:38d2692bc6a4_inst_ttyO5_Interfaces_Mk2_Tunnel.zip

1/ Looks like a front-loader washer with water heating on. Those stop the drum regularly to reverse direction, perhaps 4x times a minute, like your graph shows. Horrible stuff for an inverter, and the 'spiky' power at the kickoff of the drum will be almost undetectable. Except by the inverter..

And may possibly explain your 'mismatched' figures, with varying sampling times (the nature of the beast) missing that true match.

2/ For the system to keep up, it really doesn't need to be calling on Power Assist all the time to cover the transient stuff. I suspect some of your observations may be as a result of this, or something similar, happening.

3/ The ac-in should be at unity power factor, unless you have 'special' settings for it's acceptance.

4/ Your A input limits in the Multi may be your real issue though. You must get them to stick. You say you have them set via GX, but have you ticked the 'Overruled by remote' box in VEConfig? I'd concentrate on making that work properly before looking elsewhere.

Thanks JohnC for your reply.

1/ I understand your reasoning, but note that the inverter was actually (mostly) OFF, or supposed to be OFF. It was expected to use the grid only. With 14A input limit, this should be enough.

2/ Agree, that's what caught my attention. Why PowerAssist on?

4/ This is the most important point, I think. I have just uploaded the configuration file. You can see that I do have the box ticked on both Mutis, and that the input value is different. And I just made an experiment:

- I changed the AC input limit on VENUS to 16A. And then downloaded again the configuration file. And I see that only the first Multi changed from 7 to 8A (it divided correctly by the number of Multis in parallel). But the 2nd Multiplus did not change the input value!! It is still with 3A. And this is after a fresh file that I uploaded with same value on both.

Can someone from Victron comment on this? Is it what we should expect ?

in a parallel system, the master is totally in charge, so the input value of the slave inverter is not relevant.

Thanks Daniel for teh clarification (I also read again the FAQ, same conclusion).

So, if we can rule this out, what can be causing this? I do have an interval tighter than the default for input voltage (200 ~247 V) and I unticked the box for the frequency wide input interval. But, from monitoring Venus menu, I don't have reason to believe the frequency in my area is very far from 50 Hz. And voltage is ok too, specially when the event occurred.

try swapping master and slave and see what changes.

I did a short test today and the problem did not show. Only difference that I think of is that I updated Venus to 2.41 - and in fact it seems that the AC input values shown in Multiplus menu are more in line with what is expected. But I'm not certain it is related. I will repeat the test more in depth soon.

Anyways, yours is a great suggestion and I will take it into account if the issue manifests again. Thanks!