I currently have one Blue Nova battery setup and showing in the color control. 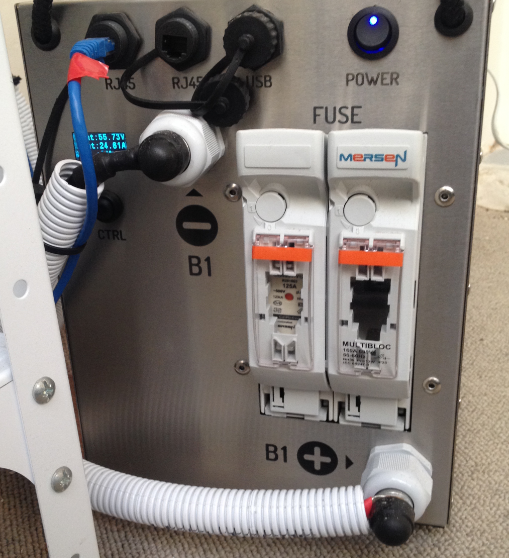 Am thinking about getting another identical unit as above and wiring it in parallel to this and then putting the input from the inverter onto one battery and output on the other. Am wondering though how this would show in the color control? Do i run another RJ45 cable to the color control and would 2 show up in the display? Currently the control is showing the charge % and temperature for the above battery but not sure if it could display those details for both batteries? Anyone have any feedback on this? Am sure i wouldnt be the first to do this.

@dustdevyl Why not just follow BlueNova's directions? What specific purpose are you trying to serve? Typically it has to be configured in a master slave scenario (daisy chain) and while batteries will show as individual devices the cgx will display a single battery bank.

You are aware the batteries have wifi capability and can be probably individually monitored from the internet? Not sure if the service has been fully launched yet, but worth chatting to BlueNova.

Am following their directions but not everything was mentioned. e.g. it is not specifically mentioned whether to link the batteries by RJ45 cable into the color control (both, separately). I figured they would show as one battery bank on the main display but wasn't sure if 2 individual BN batteries would show under the devices. Was hoping that someone that has 2 or more batteries could clarify. Will check on the wifi capability; have not seen it mentioned anywhere and neither is anything broadcast from my current battery.

Sadly I found the documentation is a bit lacking too. I tried to upload an image, but there seem to be a space issue at the Victron server end. It give a good overview under paralell connection on a page without number.

Also, I will send a snapshot of the wifi connectivity manual. Your battery is the next gen and same as mine. The earlier model had the screen to the right side. Plse remind me it uses M8 battery connectors? I need to make up some cables for my system, which is about 8000 miles away and I don't want to get it wrong ;)

Hi @dustdevyl, I have just completed (half an hour ago) exactly the same as your installation - first started with just one BlueNova battery for a few weeks, then got a second one, and put in parallel with the first.

As long as you have firmware on the batteries of v2.5 or better (latest available is v2.6c) you start with both batteries off, then press and hold the CTRL button on the first battery, and turn it on. This puts it into parallel operation mode, and it communicates to the second battery (even though it is not actually switched on yet). Wait a few seconds, then go to the second battery, press and hold its CTRL button, and switch it on. Release the CTRL button after a few seconds, and both batteries should switch on, and are now in parallel.

Scrolling by pressing the CTRL button on each battery should take you to a page on the display which shows "PO: 1/2" on the first battery, and "PO: 2/2" on the second battery. This means that parallel operation (PO) is running fine.

On the CCGX, the software on the batteries combines the information of both batteries, so you only see one device there. For example, my batteries are busy balancing out now, one is 92% and the other is 76%, and the CCGX shows the average between the two of 84%. They should settle out to be the same once I get a bit more sun ...

I have attached the latest manual which also describes the WiFi interface and how to set it up. Note that the battery seems to take at least a minute from start-up before its WiFi hotspot actually becomes available to a phone/tablet/laptop.

Actually, I haven't attached to file - Victron have run out of disk space ...

for whomever that needs it. Thanks @Suttridge and of course Dirk Niewoudt at Blue Nova.

Suttridge, that was just what i was looking for. Do you show 2 separate batteries under where all the connected devices are listed (device list)? And the average on the main screen? I am running BMMC2.4 on my battery so some quick steps as to how to upgrade the firmware would be very useful. I dont really want to drag the unit over to Blue Novas office in Somerset West if i can help it. Can you direct email me the document you were trying to attach? dustdevyl@yahoo.co.uk

I took the cap off where the cable is hooked up to the battery EJ but it just has the head of a bolt there. Didnt want to unscrew it to check the size of the bolt. For now i will assume M8 unless told otherwise.... Suttridge? You just paralleled 2 units? What size cable connectors did you use?

Apologies for messing up the thread.... Didnt realise where i was typing

Glad things are getting clearer. I will post a note to BlueNova as there material needs serious updating. They have been very helpful. I'll be grateful @suttridge if you can email a copy to ejrossouw@hotmail.com as well. Great info which I will also use when over to finish off my installation in Sept.