-You must have the minimum number of battery modules to supply the inverters startup inrush surge currents that charge the capacitors when the inverter is first connected, this occurs prior to any loads being connected. For this Inverter, 2 Batteries are minimum.

I really would like to use an 80Amp MCB, so that the Inverter does not pull much more than the calculated 62,5 Amps.

Do you think the 80Amp MCB will "handle" the startup inrush current?

Does the MCB could have a minimum operating Voltage(Datasheet not found)? Is 48V fine?

If you have remommendations for other MCBs, please share.

You are mixing all kinds of concepts that shouldn't be mixed. Looking at the types of questions you ask, I recommend you hire a professional. Or, before you do it yourself, you read up a lot on basic concepts such as voltage, current, power. For your own safety.

If you are on a boat, I recommend you also read up on galvanic isolation. As not taking that into account could mean that a couple of years from now, the hull of your boat is... Well ready for the scrap yard.

The peak power has nothing to do with the AC feed in, it's the surge capacity of the Inverter.
It can deliver 5500w for 0.5s. This is why the 125A fuse.

The ac feed in flows through the AC bus and can only supply the inverters max charge spec (model dependant) to the DC bus. 35A in this case.

god bless you. I was searching the whole web for those 5500 Watt of the Inverter. Does it also mean, that the Inverter can pull 5500Watts from the Batteries in an offshore case ?

Is this product suitable for our application?

Is the rated Ultimate Short-Circuit Breaking Capacity of 5 kA enough for our system or should we choose a higher one more like 15kA?

Better use a fuse (not an MCB) for any wire connected to the battery.

For for the battery-busbar positive wire I use a HRC fuse in a base like this:

How is a fuse safer? If it's got an appropriate trip curve, adequate interrupt rating, etc. then it shouldn't matter if it's a fuse or a breaker.

It is more reliable than an MCB. Especially for DC.

A DC fuse and holder is also a lot cheaper than a similarly rated DC Circuit Breaker.

[Edit] I see that the ABB breakers in your first post are DC-rated, so will work. They are probably quite expensive.

Something along these lines is what you are looking for if you want to go the breaker route.

god bless you. I was searching the whole web for those 5500 Watt of the Inverter. Does it also mean, that the Inverter can pull 5500Watts from the Batteries in an offshore case ?

Is this product suitable for our application?

Is the rated Ultimate Short-Circuit Breaking Capacity of 5 kA enough for our system or should we choose a higher one more like 15kA?

Yes, the inverter can supply 5500w from the batteries for 0.5s in any configuration. More details here. But don’t buy an inverter and depend on its overload capabilities to run a load.

The breaker I linked to has a 25kva breaking capacity.

You need to do some of your own research. I’m a big fan of teaching a man to fish so to speak.

Feel free to ask if the answer you conclude is ok.

I contacted the battery manufacturer Pylontech and asked them for the details of the US2000 battery.

The US2000 battery can have a voltage of 55V at an internal impedance of 20mΩ.

Quick Calculations for 3 US2000 batteries in a row:

So the breaking capacity should be higher than 9kA.

Since my battery has the highest capacity, I made the breaking capacity calcuations according to the technical characteristics of the battery.

The BMS will shutdown with this load after 15 sec, however you want the breaker to be able to break during this discharge.

Hold your horses! First remark, you are adding power between battery-inverter (DC side) and from the inverter-grid (AC-side). Second, fuses and breakers don't care so much about power. They care about current. Oh and fuses also care about if it's alternating current (AC) or direct current (DC). So you can't just add up the DC side and AC side of things. That's just... wrong :-)

For your information, I happen to have a 160A fuse on the DC side of things. After playing a lot with it, I have now a better understanding of how the device works. In hindsight, it would have been better to have a 40A fuse in stead. But then again, maybe those fuses would blow when the capacitors are charged (when you first connect a battery to the MultiPlus). This can be easily solved by not using fuses at that point in time, leave it connected for a second and then put the 40A fuse in between. But I digress.

Could you use a MCB in stead of fuse. Sure, as long as it's an MCB desigend and built for DC. Which are like at least 10 times the price of a fuse. How often do you intend to trip the breaker? In my case: my goal is zero times. So I'm cheaper of with a fuse (and a few spare ones). Furthermore, I can cheaply increase/decrease the current at which the fuse goes by replacing it.

The peak supply current between the device and the grid is 32A. So a (regular) AC breaker of 32A would be fine. Although I would consider going one step beyond to 40A depending on your actual use. Now the maximum power that can flow through the AC side of the device is 32A*230V=7360VA. Let's make a simplification by assuming the power factor is 1 so that's equivalent to 7360W.

I stand corrected about the 40A fuse on the DC side. I have been running some more tests. Although the battery charger outputs 35A at most, the inverter can output more current (around 45-47A). 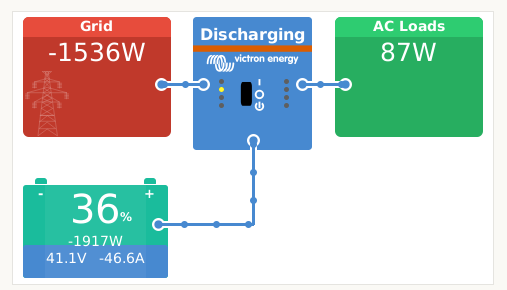 I have blown up a couple of Noarc products using inverters on Lithium. So far never killed the black Carling DC rated breakers. Kinda large, but kinda cool.

59 People are following this question.

is there any recommended brand of LTO 48V battery pack compatible with Multiplus II inverter/charger ?

I need a inverter upgrade, What inverter should i buy?