Hey all, I’ve recently installed my first Victron system on an RV. Components in question here are the MultiPlus II 2x120 24V, SmartShunt, and Cerbo GX. The way I’ve set everything up, I thought should be correct, but I’m getting some odd behavior. Because it’s an RV, there is a 12V DC system in addition to the MultiPlus outputs. I have 2 batteries wired to the battery side of the shunt, and system side of the shunt goes to the MultiPlus, DC system, and all the Victron components; that is to say, absolutely no load bypasses the shunt, it should see everything. Because of the DC loads, I have the Cerbo set to “has DC system”.

When the MultiPlus is off, it appears that the shunt registers DC loads as charging the battery, not drawing from it. The little dots on the overview graphic appear moving towards the battery, and the amperage readout on the battery shows positive while on the “DC system” amps show negative.

When the generator is running and the MultiPlus is charging the battery, it seems to mostly behave normally, but the DC system amp readout will bounce between positive and negative.

I’m not sure if this is the root cause or not, but the State of Charge readout is entirely inaccurate, too. I’ve just done my first trip with this system. I had the batteries fully charged before leaving, sync’d the shunt to 100%, and left for the trip. My first night, batteries completely died, to the point nothing would power on even briefly, the 24V battery bank was registering under 10V, yet the shunt still read 82% SoC. Throughout the rest of the trip, I had low batteries at various times, setting off the alarm on the MultiPlus, etc. And the shunt would read <20V while still showing 100% SoC. It also appears this is impacting charging, as the batteries were under 20V and yet the MultiPlus was showing the charging state as “float” within 10 minutes of starting the generator.

Needless to say, I’m rather confused. Any tips would be greatly appreciated!

EDIT: Pictures of installation for wiring purposed added below, thanks @Matthias Lange - DE 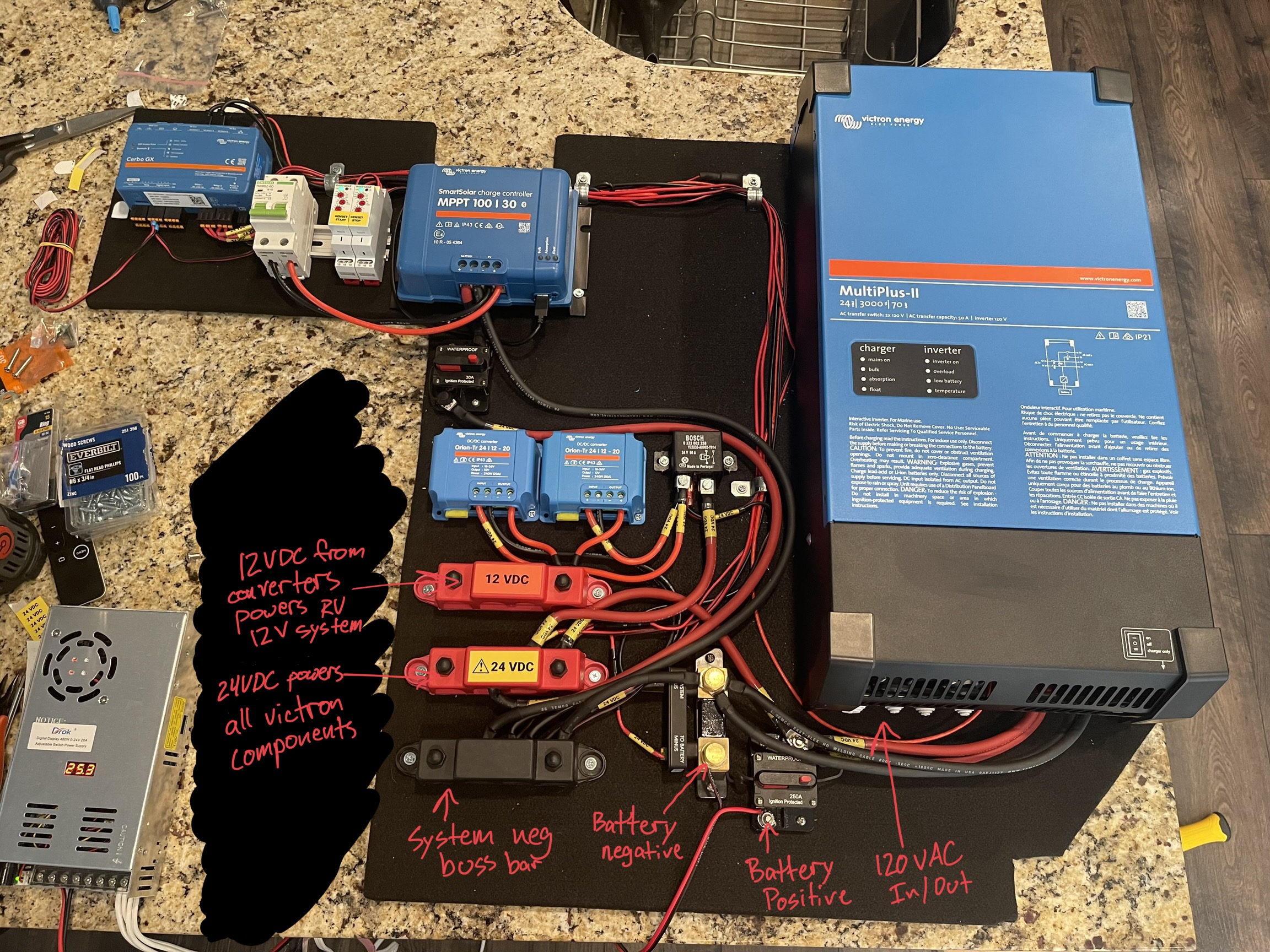 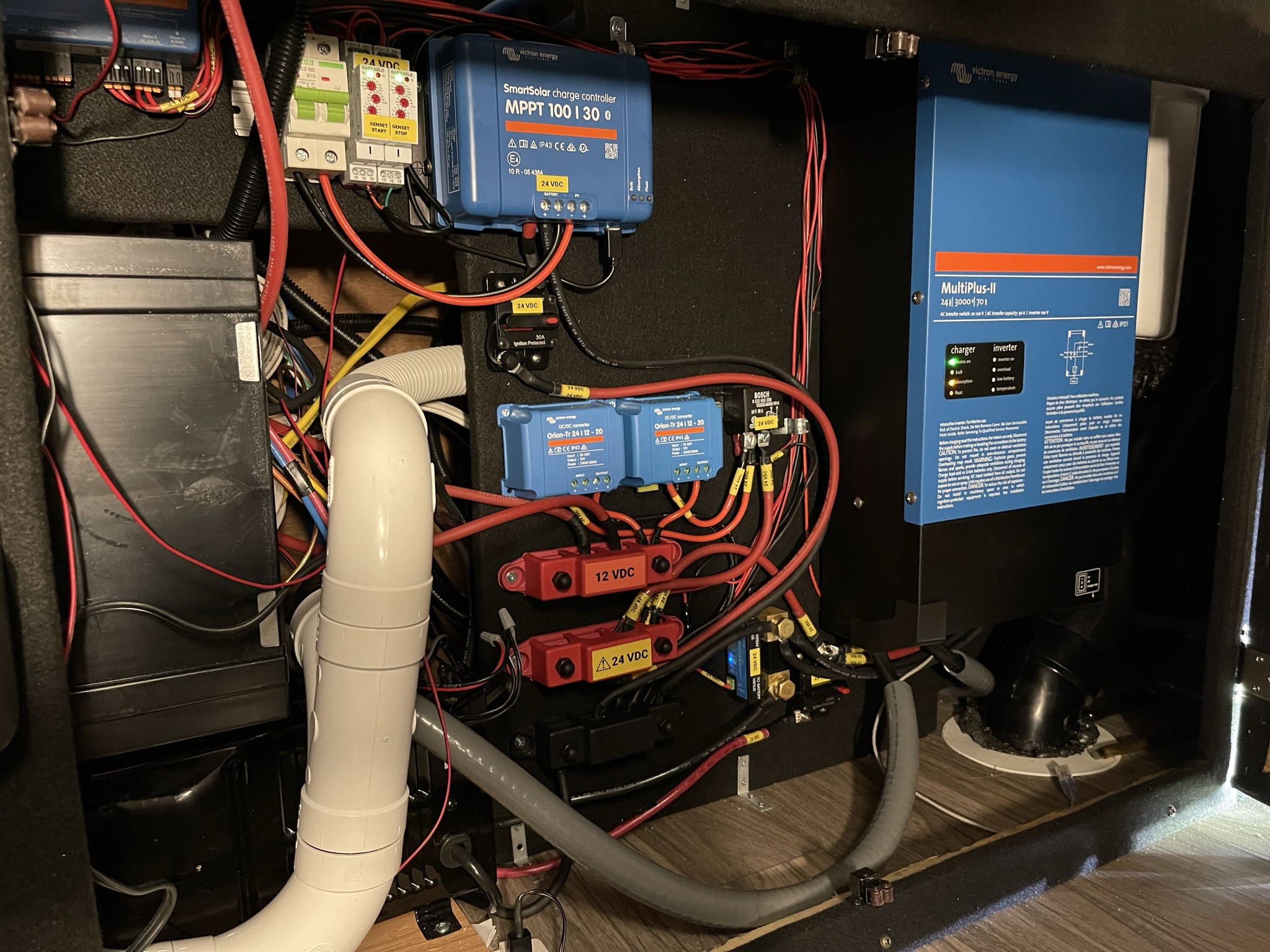 Matthias Lange - DE ♦ commented · Sep 27 at 07:43 PM
Maybe a wiring diagram and/or some pictures of the installation would help.
0 Likes 0 ·
2 Answers

I am having the exact same issue with the DC load reading.

The SOC/low voltage issue, which I also had, seemed to be related to the batteries not having quite the capacity I had set, I am still playing with that and its frustrating. I am wondering if temperature has something to do with it as the issue got worse when the weather changed.

However my system still charges when the shunt is showing 100%.

I dont know if it is relavent but SOC monitoring in my multi is turned off.

I will be watching this thread with interest.

Alistair Warburton commented · Sep 29 at 11:28 AM
Anyone know why this got tagged as an expert answer?

That wasnt me and I am no expert in this respect, I litterally said as much.

If this is automated behaviour can I turn it off?

knissone commented · Sep 29 at 07:09 PM
Thanks for the response! I will say that the extremities of my issue were more pronounced when I was in camping in colder weather, with the caveat that it was "California cold"; I don't think 45 degrees should've affected battery capacity in any meaningful way.

I also have SOC monitoring turned off on the MultiPlus.

I will post a screenshot of the shunt settings on Sunday (RV is parked in storage).

Love it when life gets in the way! Finally got these screenshots.

I think my charging problem with the SoC is either resolved or never really was a problem at this point, I may have just been making that one up.

My battery SoC is still definitely showing higher than the voltage justifies. Inspired by your comment, I think I'm going to reduce the Ah capacity on the SmartShunt to better account for my crappy batteries. This won't affect charging, I assume?

And maybe some direct data from the shunt

72 People are following this question.