setting up multiplus for solar priority with external grid-linked solar?

Due to irritating conditions with my grid provider, I can't touch my grid-linked inverters - they can't be moved behind my multiplus-II or the grid provider will terminate my feed-in contract and replace it with a very rubbish one..

I have two inverters (physically separate sets of panels) feeding the grid, I have rs485 metering on the solar feed to grid as well as the overall grid. I am happy and allowd to feed to grid from the inverters, but not the multiplus (else the above feed-in rate change), but want to prioritise battery charging and self-consumption.

What is the best way to do this? I plan to setup a Raspberry Pi with Venus OS and the Node-red image.

I think you can use ESS for this assuming the RS485 solar meters are compatible with venus os.

Install a RS485 meter that's compatible with victron where the grid comes in and then install the multiplus in parallel with the grid and have both PV's and grid all tying into multiplus using AC-in. The ESS battery prioritise setting should then do what you're looking for.

It will take excess PV into the batteries and then use them later in the day when AC loads > PV production. Set ESS grid set point to 0 and the multiplus wont export.

So your configuartion would look like the top part of the diagram in this link. ie without critical loads or DC coupled PV:

Excuse the poor adjustments to the photo but this is exactly my setup but without the x2 PV inverters. 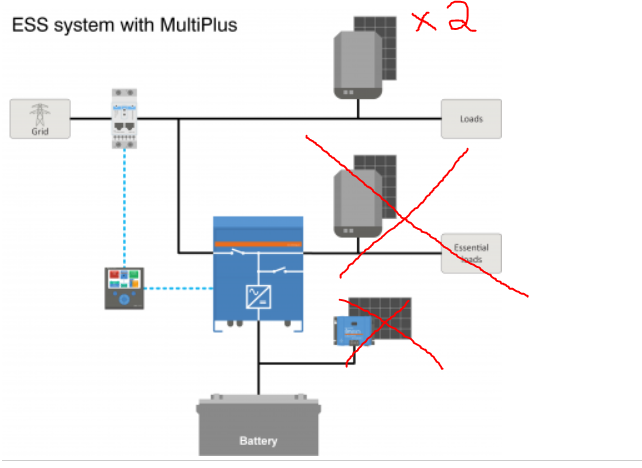 69 People are following this question.