a) the detailed solar data in the dashboard live view is updating just in the cerbo update interval.

it was a realtime since 4-5 days ago looks like something was done after an update of the VRM portal ?

The power is not correctly shown and maybe also not correct in the statistics.

Is there a way to change that to get a correct AC Loads output ?

Is there away to let the VRM Portal know that its on L3 not on L1 ?

Is ther a way to Configure the Cerbo or the MP2 that it knows it is connected on L3 ?

Hi, thank you for reporting this. Point a) is fixed now so the details should also update in realtime.

nickdb · Oct 04, 2021 at 02:35 PM
@Alex Imbrea (Victron Energy Staff) thanks, except now the historical data chart on the dashboard is broken.
Share ·

Alex Imbrea (Victron Energy Staff) nickdb · Oct 04, 2021 at 02:40 PM
@stemue could you please provide a screenshot or a description of the way is broken for your installation?
Share ·

Hi, the historical Data in "SytemOverviewl shows now "No Data to Display". The "Consumption" and Solar Area is working good

@stemue This part should also work again. Might require refreshing the page.

Here is a screenshot of the Problem with the MP2 connected to L3 and the poweraddition in the interface to L1. You can see in grid L3 is compensated and in AC Loads its added to the Power of L1. 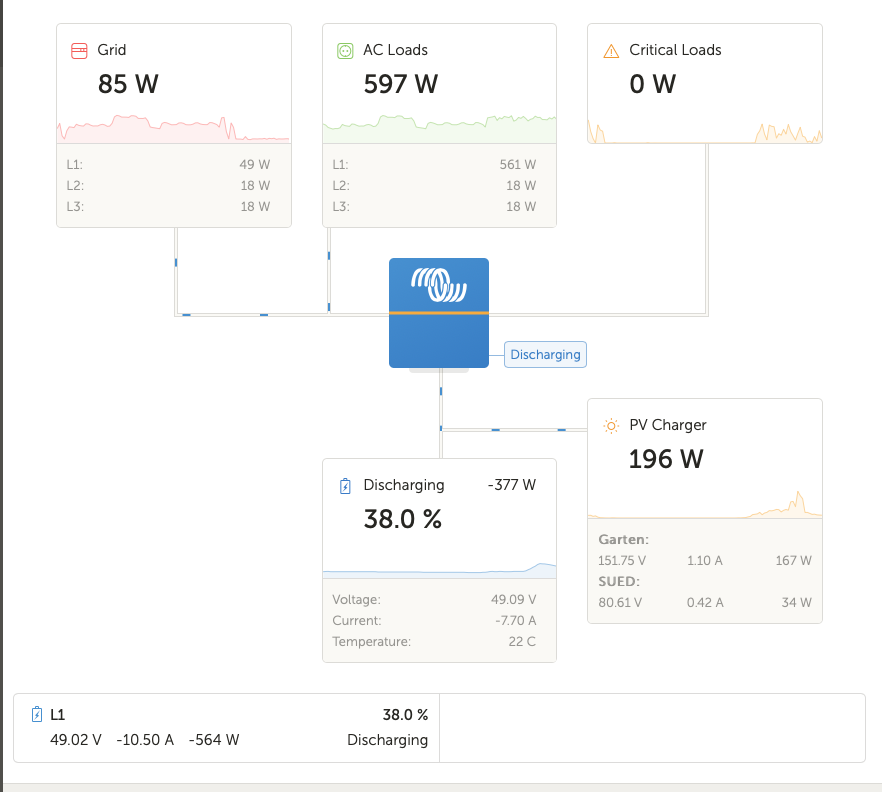 There is no way to set the ESS to run on another phase than L1.

„Make sure you install the ESS on L1. If it's installed on another phase the visualisation will be wrong.“

thanks for the link. the problem is i cant move it to L1 due to phase inbalance max allowed in Germany.Maybe Victron can add this as it is a feature wich makes the system much more customizable to fit the needs of customers.

Unable to get updated data on VRM Portal after Cerbo GX firmware auto upgrade from v2.51 to v2.60

Feature request: Allow Multiplus to be switched on&off from the VRM Dashboard

Who is the administrator on an installation