On device lists in both remote console on LAN as well as VRM, the MultiPlus II just shows as a "VE.bus device", without its full name. This is the same as with Venus GX 2.23.

The Product shows as VE.bus device, and the Product ID shows as 2623.

Why does it not show the full name of the MultiPlus, like for my other installation which has a MultiGrid in it ? The MultiGrid shows as MultiGrid 48/3000/35-50.

By the way, I have tried rebooting the Venus GX, as well as doing the "redetect system" thing, but it still stays the same.

Below is a screenshot of my two installations, one with the MultiGrid showing its name correctly, the other with the MultiPlus II just showing as a "VE.bus device". 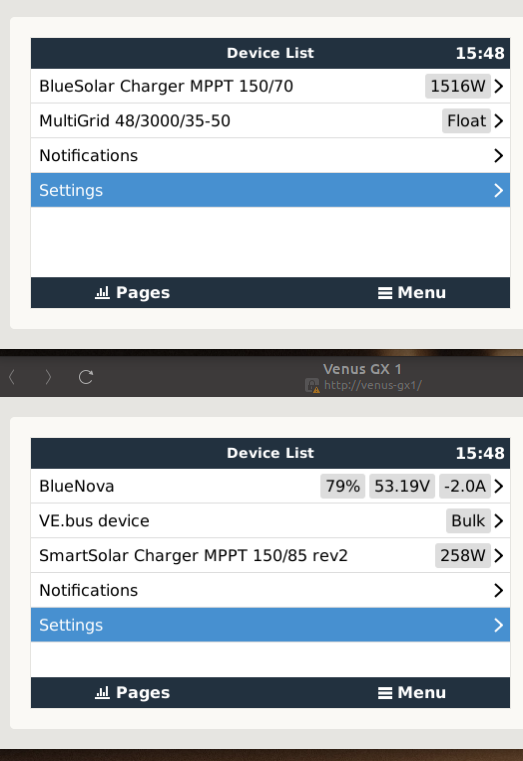 It seems that is a bug.

Thanks for reporting. If you stay up to date with GX device software updates, it should be fixed soon.

thx, also resolved it for me!! I upgraded to 261 and it displays perfectly.

first bof all install FW 459 and see ho0w you go

Ah, sorry, it is already on 459 - that was a typo. The cable between the MultiPlus and the Venus GX is a standard 1m cable - all other information works fine - just the name of the product.

ESS system with two signal BMS and a SMA inverter

Mobile alarms for venus and multiplus 2