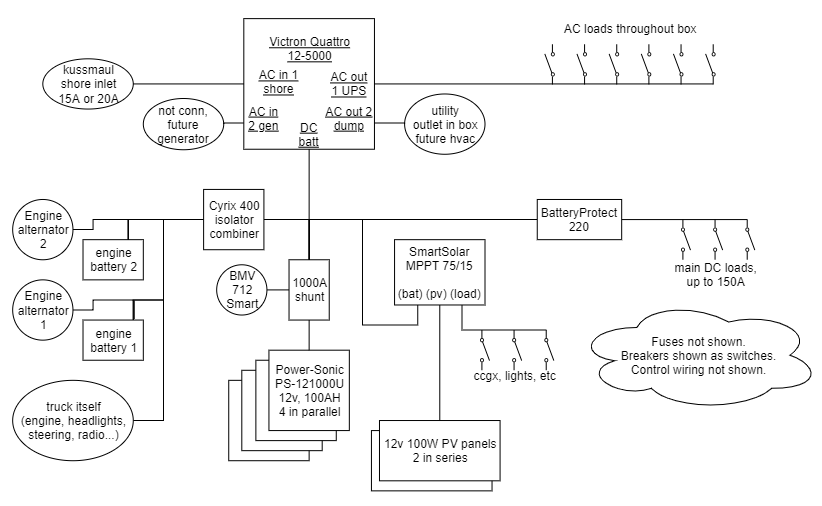 That's probably more detail than anyone needs, but I'd rather get it all out there initially.

Short story: I'm trying to get the BMV's measured battery current to drive the Quattro's charger current regulation. I have a large DC system, which can draw more than the batteries' rated charging current, so the Quattro's own DC output metering isn't appropriate.

Long story: I'm not running on battery for very long, just minutes between killing shore power and switching to engine/generator power, so I don't need a huge battery bank. The 4 batteries here barely fit anyway. The Power-Sonic datasheet says up to C/5 (20A per battery, 80A for the bank) is acceptable. Still, 80A is way lower than the DC system, which can draw over 100A when everything's active.

I have a CCGX, which talks to the BMV and SmartSolar over ve.direct and the Quattro over ve.bus. It seems to understand the SOC from the BMV, and it does the math to figure out how much "DC system" load there is, but I can't figure out how to feed this info back to the Quattro to actually control its DC charging output.

I'm totally fine with short transients, like if the DC load goes away and 200A suddenly gets shoved into the batteries. They should be able handle that for a few seconds, just not hours at a time.

Is this what DVCC is meant for? Is there an assistant I should be using?

Thanks in advance for any hints!

Having scoured the scant DVCC info in the CCGX manual, I couldn't see a reason not to try it, so I enabled it. Doesn't seem to have changed anything...

(Side note, if there's a presentation or something that gives a high-level overview of what/how DVCC does, that would be a helpful addition to the manual!)

First of all, avoid having the CCGX on the load output as this will result the cut of of the CCGX on low voltage, which you want to avoid i guess. (Then also DVCC is switched off). Anyway, the charge current is limited on DC voltage which will fly up when something tries to pump in the high amount energy. So is regulated or not, the charge current will be reduced anyway.

2 People are following this question.

DC Power Where is it going?

PV output (watts not volts) falls as inverter load increases. How can this be corrected?