Hi (and a happy new year, of course),

running 2 of the BYD Premium LVL 15.4 in a 3P config with MultiPlus II 5000 shows weird characteristics while approaching the 100% SOC - after updating to the latest BYD battery firmware levels. While charging (with relatively low current 10-20A) below 100% SOC all looks fine (max Voltage (CVL) 58.4V max Charge Limit (CCL) 468A) - once running at 99% for a while - so shortly before reaching the 100% - the max charge voltage (CVL) abruptly dropped to 56.9V (CCL to 0A) and the Inverters start to discharge with >160A for about 10-20 sec before start charging (low charge current) again. This hasn't been observed with previous BYD firmware levels and the same levels on the MPII and Venus. This happens now during all charging cycles reaching 100%, no exception. Is there any mitigation/workaround going back to a smooth approaching the 100% SOC ? Looking more at the nasty details i also saw that charging (~5A) continous at 100% SOC level while the BYD BMU reports a max charge (CCL) of 0A, the voltage is still below CVL - is that Ok ? Is the voltage level the important one and the mac current (CCL) could be ignored ? just to be sure the batteries staying healthy ;-)

When the BMU is showing a 0 limit either on charge or discharge it is preventing those conditions or wants to prevent them.

When it switches to discharging it is possibly trying to pull high cells down. Or could be discharging the batteries down to float voltage (which is lower than absorption).

Are you on grid or off grid?

If you have set it near to the max range of the battery according to the datasheet (59v) they do tend to get grumpy.

Run them at the (for your application) recommended voltages.

the overall config is ESS and all the BYD related parameters are set according to the documentation from Victron - i've not set any other values or limits. All the voltage and charge limits coming from the BYD BMU. The system runs 'grid connected' and prior to the latest BYD update, it runs runs perfectly before - smoothly approaching the 'full state' with no sudden voltage limit changes (from the BYD BMU). In addition to the initial post - the BMU changed the max voltage (CVL) back to 58.4V once the SOC got lower than 100% again.

What you are seeing in the GX is what the batteries are sending there and asking the system for. So from that side it is working fine.

Are there any errors on the BMU? Before the firmware update was it charging to the 58.4V?

If the behaviour has changed and all you did was update the batteries, then that is where the weird behaviour is coming from.

Maybe updating all the components in the system would be another troubleshooting step if you feel that this really is a problem. But in all honesty if no errors are being reported then it should be fine.

Fyi. Even Pylontec have a similar behaviour 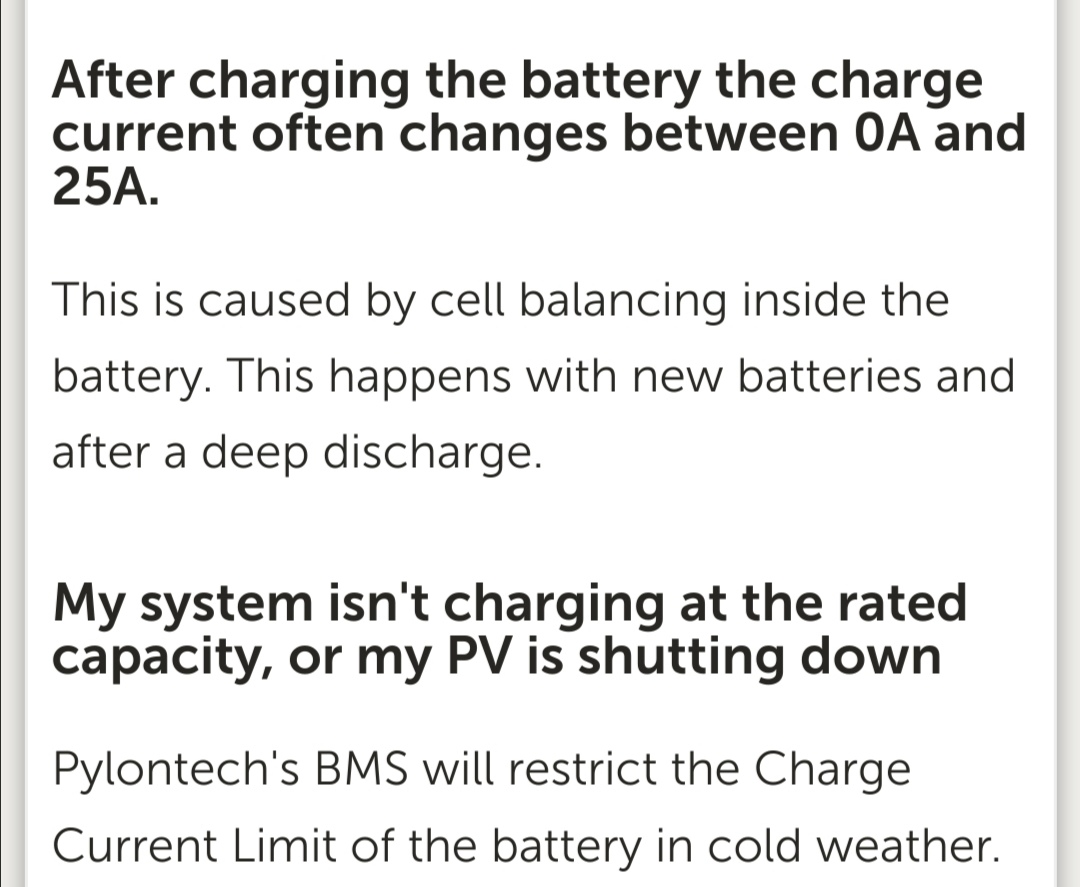 these 'charge current' the maximum limit the Pylontec BMS/BMU reports, or the 'real current' seen by the chargers ? I've dived a bit in the VRM history and found two typical scenarios - one before and one after the firmware updates (although the case from July also runs the previous Venus version). The relevant parameter over 10min (stored in the VRM DB) looks like

In addition, as mentioned before, i see 'significant charging' i.e. >=8A while the BYD BMU says 'max charge current 0A'. I haven't yet looked through the source code of the public venus code if its usual to 'slightly ignore' the BMU/BMS settings. I though these limits will be enforced with highest priority.

The BYD BMU/BMS system shows no errors etc. in their logs. Unfortunetly BYD is not very chaty about the changes - no changelog.

BYD do have a very interesting way of working.

I have only really worked with the BYD flex but they do have the same behaviour.

Voltage is not such a great indicator of soc on lithium, I am sure you know. Even at target voltage there is still alot of energy a cell can absorb before climbing up another 0.5v

Do you have solar on the setup? Mayabe the swap between charge discharge is solar dipping in production and the loads just being drawn from the batteries, or if no solar then power assist.

I was looking through some vrm info and it seems even the BYD Flex has the same voltage requests from the system. I will watch it a bit more when I have time and see whats what there.

Alexandra ♦ martghh · Jan 11 at 08:22 PM
Since the mppt etc are set to lower voltages, then the BYD is the one dictating the voltages and the system is following that.

In the meantime, you can evaluate if there really may be an issue or not.

I think at 58.4V each cell will be at 3.65v which is fine for some lithium chemistry. Must be fine for BYD if 59v is their max allowed.

I can say you will see high voltage errors on the BMU if there was unhappiness internally. We tested it by charging off grid on a non Victron system that cared not what the BNU wanted and BMU does chat about that and log errors.

i do have solar in the setup but i do not see the problem there - in all of the example cases the solar production rate was constant (+-2%). The battery temp increase in all cases by 1 degree (although the resolution seems to be only 1 degree !) during the period of 'near full' to 'full' battery state. All other battery specific numbers (max/min voltage etc.) are within limits and no errors or warnings from the BMU event log. Still unclear to me is the understanding of how the MultiPlus+Venus should comply/react on the changing BMU/BMS limits - right now only the voltage limit was enforced, the current limits not fully

Does the Multi II control SmartSolar charger as well ?