I've got a very particular DIY Nissan Leaf 24v battery configuration and their operational voltage is about 28-33v and I'd love to get more out of my Victron 100/50 12/24 Buck Boost Converter instead of only being able to charge them to 30v (buck boost limit).

-- I do also have a 900W solar array and MPPT which provides the desired 33v charge but during the winter it is not enough to keep the 8kWh battery above 50%.

If I run the buck boost output through a step up converter then through an MPPT do you think it's possible these components will work in a way which will allow me to output the desired 33v charge output via the MPPT?

- in this configuration, will the buck boost endlessly provide output of 50 amps if programmed at 30v output charge in it's software?

As I understand it, because the Orion DC DC Converters are isolated and do not have a current path between the input and output, as long as I set the buck boost to below 30v (it's max) it should not be able to see any voltage higher than the input side of the Orions, and therefor should continue to output a constant desired voltage <30v.

Pictures below to get an idea of what this will look like. I'll be doing a test wire and config before the final mounting of the board happens.

This is an "upgrade" to my system that is already working perfectly and runs a 240v mini split AC, 120v induction cooktop and water heater, as well as all 12v devices.

If this does not end up working I will be moving in the Safiery Scotty device direction.

I'm really enjoying playing around with this very unique system, it's been a fantastic learning experience, much more learning to be done for this humble DIYer. 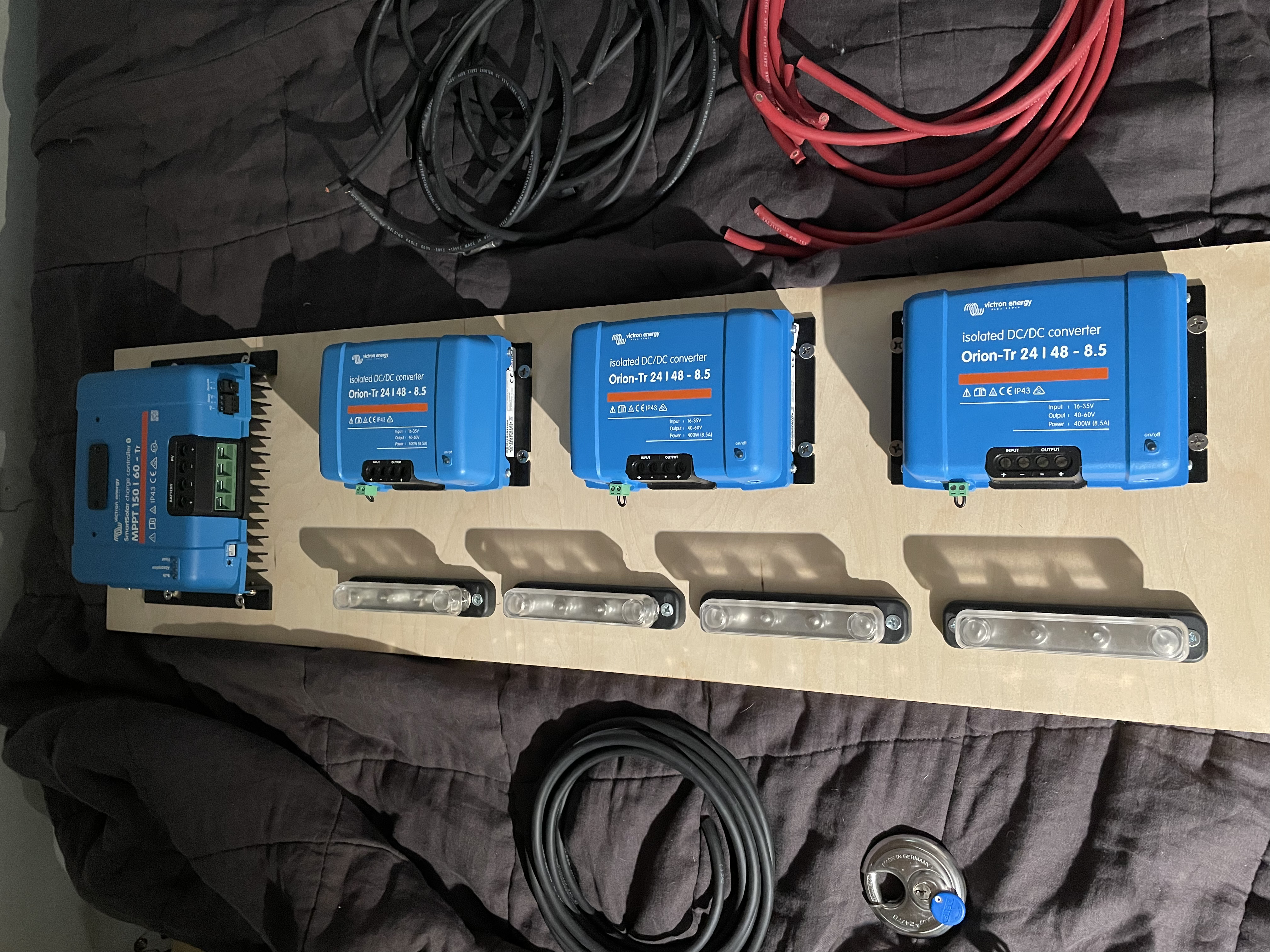 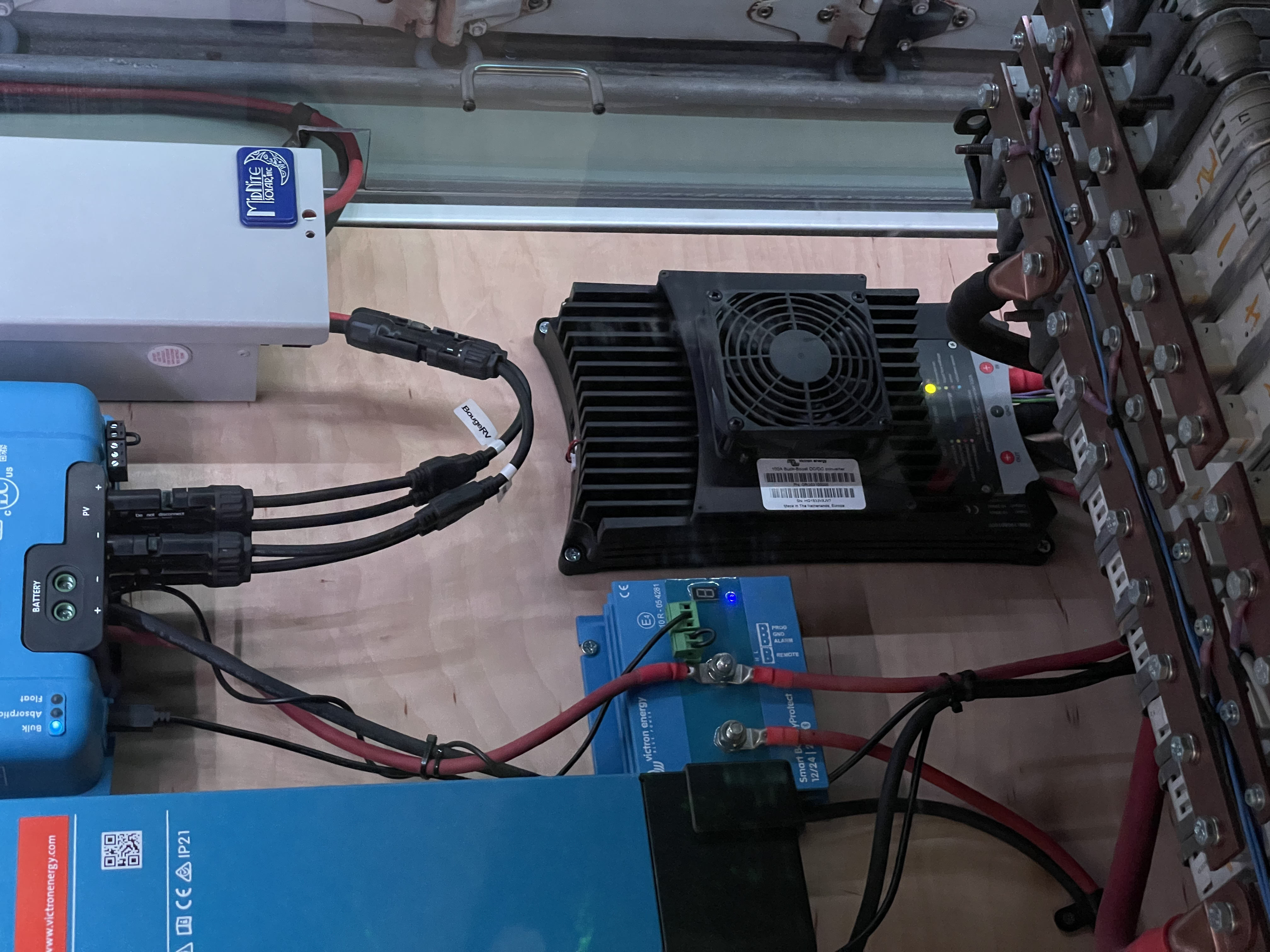 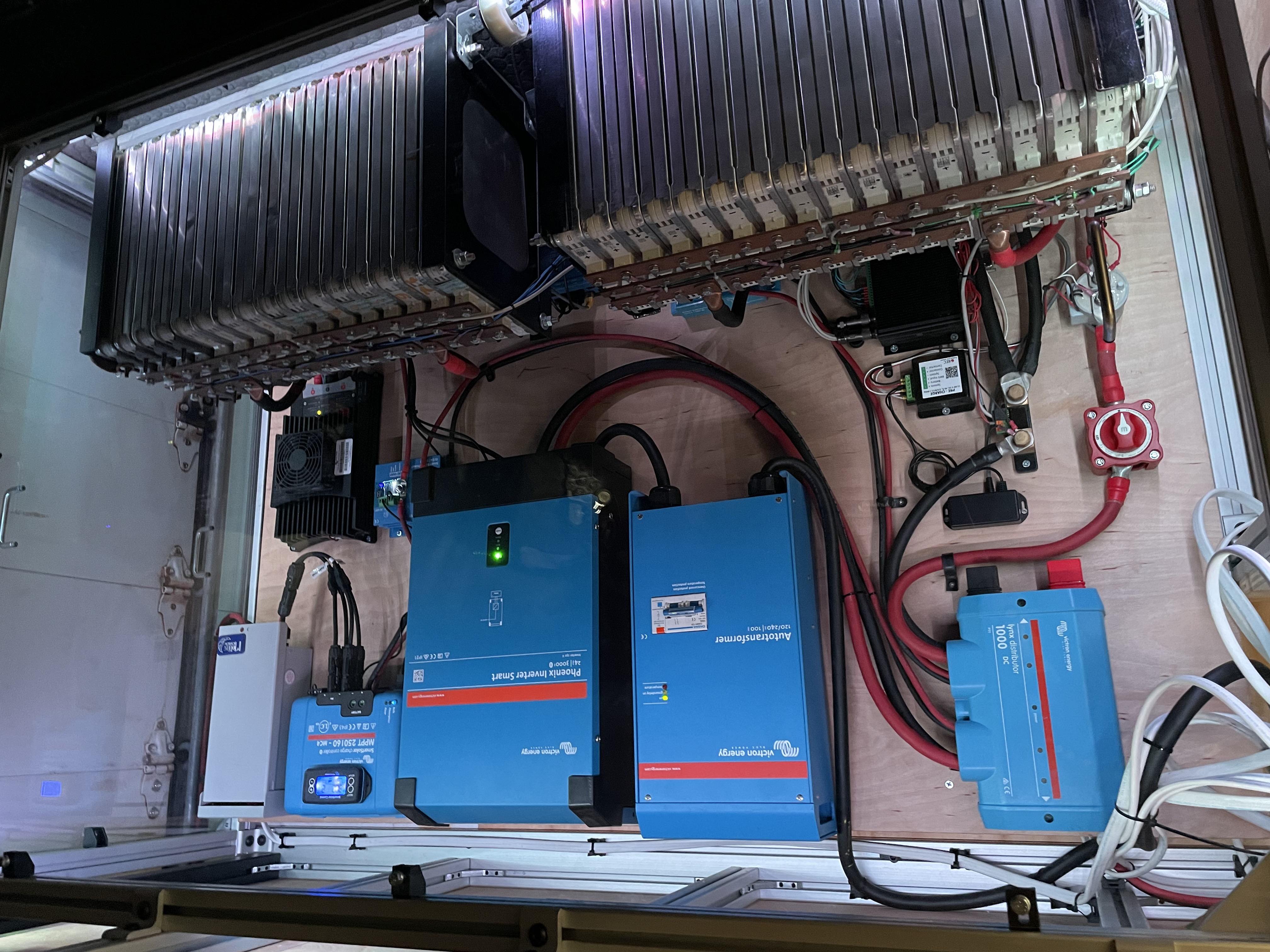 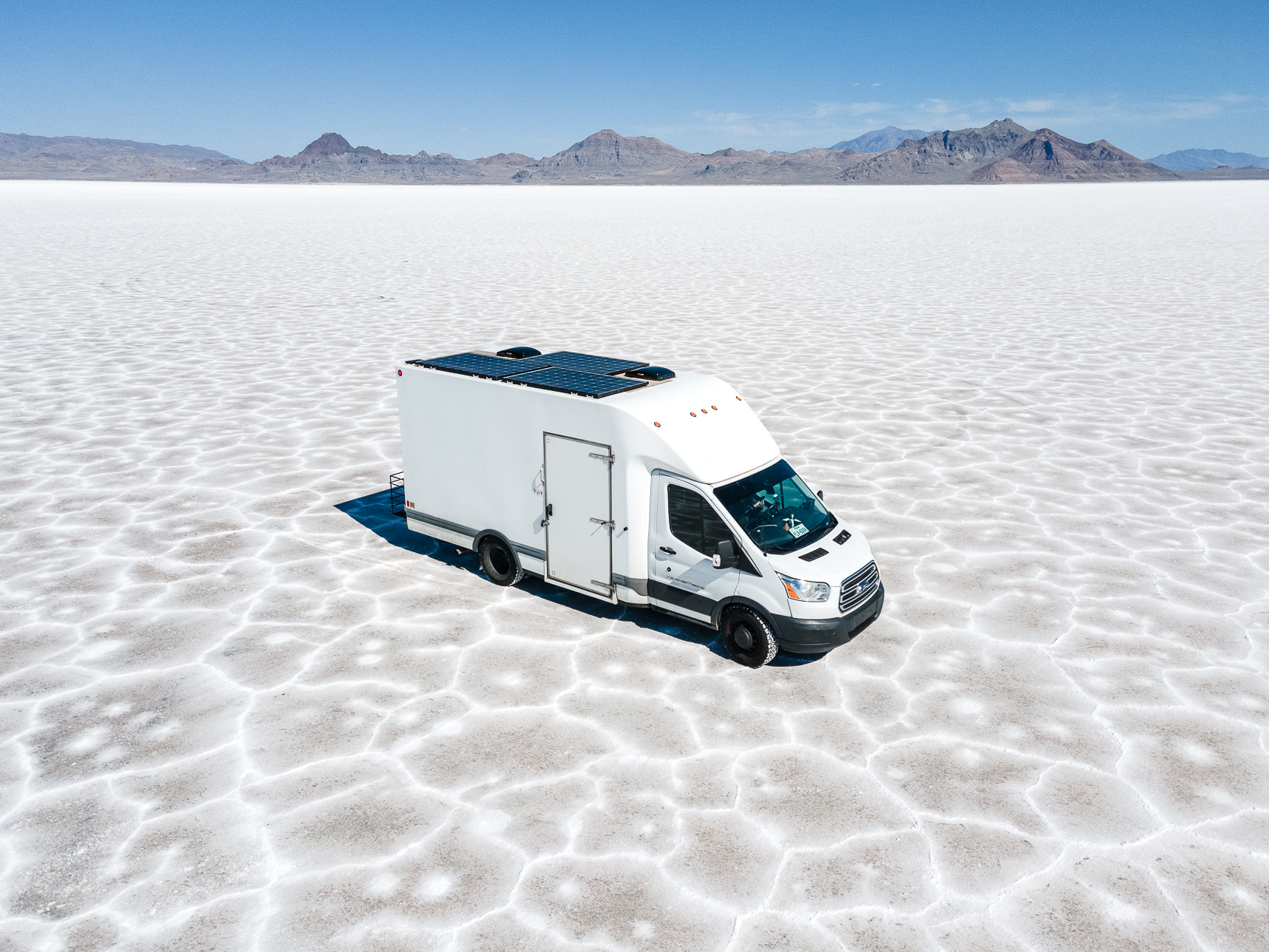 Update -- I wired everything up and was able to get the buck boost to send current through the Orions and MPPT however it keeps cycling after about 20 seconds of current.

Also, 1 of the Orions is about 10 degrees hotter than the others. All of the output and input voltages are the same, or at least within 0.1v.

I'm enjoying the experiment and would love to know if anyone has best practices for having 3x Orion 24/48 dc dc converters wired/configured to share the load equally. 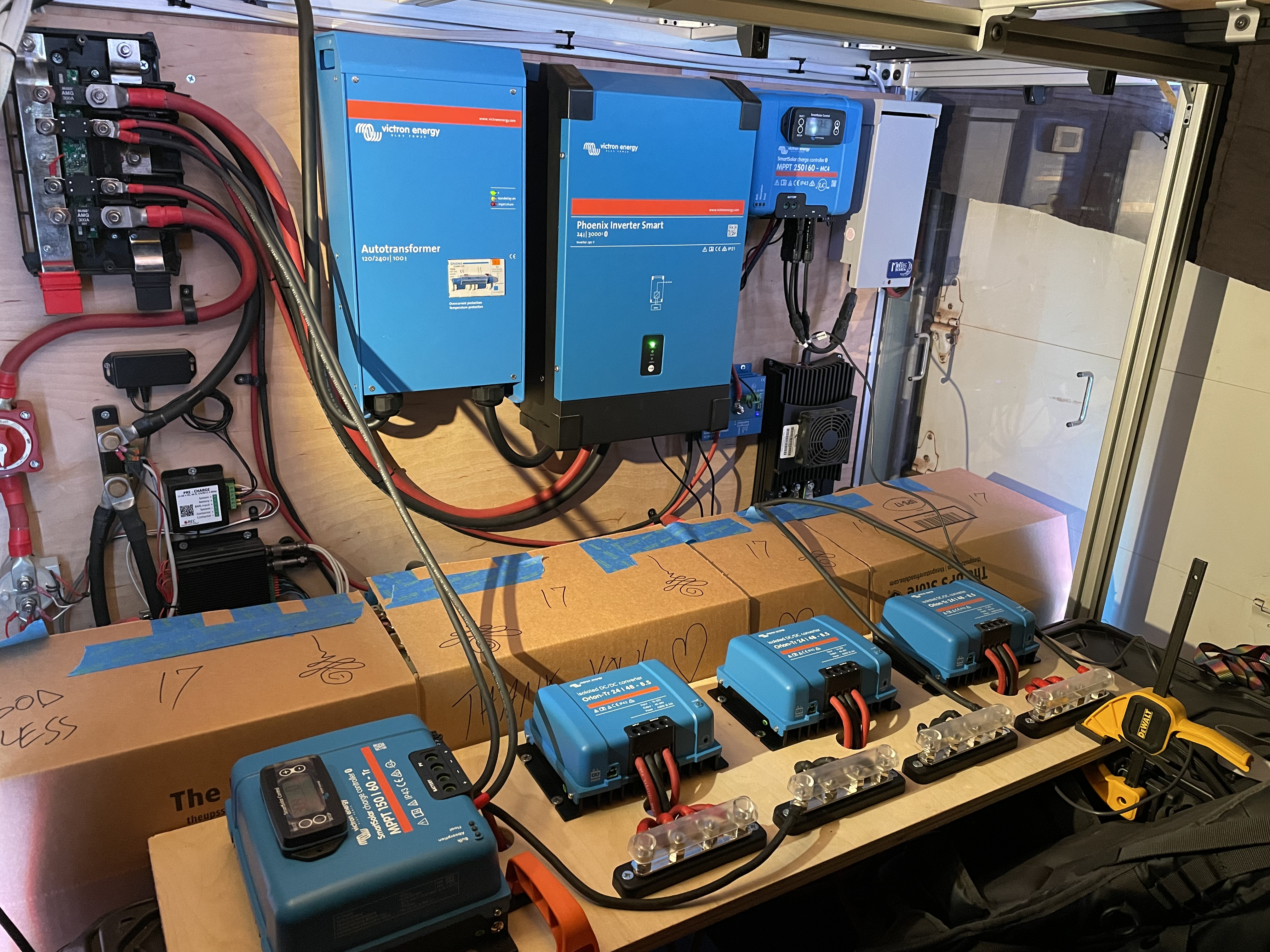 Below is screenshot of all (or some) of the converters and mppt (Alternator’s MPPT) working up to 700+W (desired is closer to 1200W though, which the 3 Orions should be able to provide, unless the inefficiencies stack and then perhaps I’m at limit)

I can hear the converters "tick" when they switch on and they aren't quite in synchrony, I imagine this causes problems with load sharing or even one or 2 of them not activating.

Can I wire them in some way with the remote switch to all come on at the same time?

Should I wire them all directly to one another instead of using bus bars? i.e. wire positive to positive and neg to neg?

I raised the output voltage via the rotary switch on one of the devices from base of 40v to about 42v to start various tests and the buck boost is now constantly delivering around 20 amps current at 30v.

I also have been testing temperature differences and it seems that whichever Orion is set to the highest output voltage, it is the unit that "does more of the work" (gets the hottest).

I ended the test for the night by maxing out the output voltage dial for all 3 Orions to about 60v, which led to still consistent current but a higher level that any previous tests.

The tests concluded with an output of 885W. I'd still love to figure out how to utilize the full current of the 50a buck boost though. (1200+W ***update***if the efficiency losses dont stack)

Update *** i’ve got the system now operating at a consistent level with an output between 700-800W.

Does each Orion converter have a 11% efficiency loss which would be 33% cumulative loss which is why I’m seeing about a 30%-40% drop in output across the system?

I'm surprised. I guess the leaf battery has an integrated BMS/charge controller.

First one is that you say 900W of solar, but you're expecting 1400W. You're close to the 900W of the panels though, pretty good for winter and horizontal panels.

Second, the Orions. Think of them as buck boost converters with battery charge capability and output current limited. So they must all be set to the same output as you found. Otherwise if one is set higher, the others will see the higher output voltage from the high one and shut down.

Hi Kev, Thanks for the comment in the info!

The 1400W should actually be 1200W and that’s the maximum output of the buck boost converter. I initially wrote the wrong value.

The 900 W of solar is unrelated in this thread it’s just a statement that I do have an alternative charging source but the 1200W that I’m desiring is from the alternator not the solar. (My typical winters day solar maximum is around 500W, Summer is above 800 at best)

The screenshots that I’ve posted of the Victron MPPT are from the alternator ,they’re not from solar, it’s actually hooked up at the end of the Orion converters and is what is giving me my 33V charge output.

Sorry, was confised because there was souch about solar in there, mppt output as well. Saw drahon and thought nice name.

On the split between orions, I've no idea what the efficiency is, but working with your 11% loss, you can't add to get a cumulative loss. Each one is only carrying one third of the load.

Will be interesting to see if you can increase the output.

Not sure why you're outputting for the Orions to the MPPT. I think you have that and the Orions fighting.

How to charge a starter battery from leisure battery?

How to measure two DC Inputs On CCGX