Am I correct that I cant use the Victron Connect Windows app with my Victron Bluetooth enabled devices?

Am I correct that I cant use the Victron Connect Windows app with my Victron Bluetooth enabled devices? Why is that? My laptop can pair with my BMS and charge controllers but they dont show up in the Windows app.

I can confirm, VictronConnect does not support bluetooth on Windows.

We would love it too. We have no interest in selling USB cables and would much rather everything work smoothly through bluetooth across all platforms.

It will come - but can’t promise when

(EDITED BY MV - I removed the Qt part)

OK, Thanks for the explanation.

Seriously?? This is super lame.

It has been almost a year. Any updates on this?

Hi all, Guy asked me to post an update on this:

VictronConnect is using a software framework, Qt, which first didnt support Bluetooth Low Energy at all on windows, and now does so- but still with some (for us) critical missing pieces.

so to answer a few of the comments in this thread:

- no we havent quit working on it. we’re trying and developing using the Qt library updates, getting close and closer. And waiting for them to bring it far enough so we can finish it.

- yes your windows laptop will be able to pair them, and still unfortunately we can’t use them. At least not straightforward enough for is to have done it yet: as a cynic with somw sw dev. knowledge might say: qt framework doesnt perse need to hold you back. Why not do it yourself or fix the qt framework yourslelf? Answer is priorities and effort needed by top developer to pull that off; and not just make it work, but make it work super reliably etc.

concluding: At some point we’ll for sure have this working on Windows, but unfortunately not yet.

UPDATE 2020-07-24: contrary to above, currently I no longer expect this to be ready this year. Not even in beta.

Its not scheduled. My above post explains the technical background for why it doesnt work yet. I dont like it either, but it is what it is. Sorry.

Ps - Earlier I hoped for/expected a solution this year, but still nothing; so I added an update saying so in my above msg.

For some unknown reason you need to buy their USB to VE Direct Cable to view on windows. I don't understand that either. But thats how it is today. -Bill

Weird. I hope they change that, seems they are just trying sell USB cables as my laptop sees all three Victron BT devices and pairs with them, but the VictronConnect software does not detect them.

You might be able to use a Android emulation program on the windows system and thus run the victron connect inside that emulation.

could be worth a try, but will be a did of mucking around

There are three main uses for emulators. The first is the most common and it’s for gaming. Gamers can use emulators on their computers to make some games easier to play. They don’t have to rely on the battery life of their devices and the existence of macros and other tricks help the process. In most cases, these little tricks aren’t illegal (in most games) so nobody really has a problem with it. The best Android emulators for gaming include Bluestacks, MeMu, KoPlayer, and Nox.

The second most common use case is development. Android app and game developers like to test apps and games on as many devices a possible before launch. Usually the Android Studio emulator is fine for this kind of work. However, Xamarin and Genymotion are excellent for this type of use as well.

Poor experience with Bluetooth connection. So you can try to use Android emulators for windows system for better performance:

Six months on from the original response is there any idea of timescale for this functionality?

@Guy Stewart (Victron Community Manager) I would very much like an update on this subject. Being able to connect one or more BMV712 to a Windows laptop via Bluetooth would add huge value for us. USB or serial is really undesirable.

We found we could connect the VE.Direct directly to an HC-05 Bluetooth to UART module. The module needed an AT command to set the baud rate to that of the BMV-700 and to check the correct mode was set. On windows the Bluetooth connection is set to appear as a standard COM port.

Cool trick! I can see how that can work indeed.

As former software engineer, I'm guessing that you guys have quit working to solve this problem. Otherwise, it would not be taking this long. Am I wrong?

Don't know if this will be helpful or not, but Windows 10 now has the ability to link to your android phone (and probably tablet). May be brand specific though. I'm a Samsung guy & this feature is letting me see & use every app on my Note 9. So, while I haven't tried dragging my desktop out to my van yet, I'm guessing that a Windows 10 laptop would work. 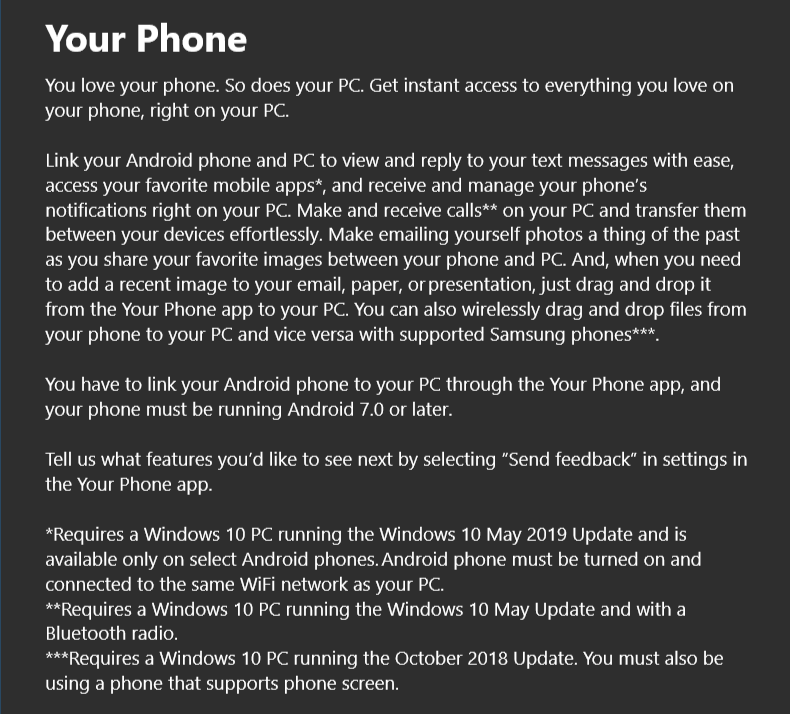 Been another year, any progress?

I've just bought a new battery charger BSC IP67 and plan to buy another charger and more stuff from Victron, if it works fine. The Android App with Bluetooth works fine, but that it still does not work with Windows App after many years is very annoying. So the decision must be: Forget about Qt or forget about Bluetooth !!

I would propose to forget about Bluetooth and change to implement WLAN or WiFi. Just as IOT works.

Create a local webserver on the devices and let the WiFi create a hotspot. So the users can access the devices with the browser on the local devices using WLAN / WiFi and independent of the device (Android, Windows or whatever) and independet of updates on their computer-devices.

Then let the user configure the devices to connect to existing WiFi Networks, so the devices an be accessed remotely and not only just beside the device.

As next step create a web api so the devices cna be integrated in home-or industrial automation systems or in a cloud application. So the data can be synchronized into a cloud database. The end-users then can access the cloud data using again the browser, with all devices, independent of updates or changes on the operating systems. No more issues with the Victron App when a Mac update, a windows update or an Android update happens, because users will use the browser only.

Such a system could also protect the devices and alarm if any values go out of a normal range.

If you would provide such a system, I certainly would use it and also pay a fee for use of such a system, it would also be strong sell argument to buy more Victron devices, because all can be integrated into one system.

On the other hand, you would also learn a lot of your products that are in use while getting statistical data of the baterries or devices that are connected to your cloud.

As an example for such a system, check the Shelly devices from allterco robotics. They do exactly the same. The devices have a local webserver for configuration control and data display and there is the cloud shelly.cloud or my.shelly.cloud. plus an android app, But for Windows-Users we can just use the browser.

If you would have invested the time and money that was spent with the Qt Problems, you would already have products that are Wifi enabled or cloud enabled.

The alternative would be to create a device that acts as a bridge between the locally bluetooth connected devices and the cloud. So you would not have to change the bluetooth enabled Victron devices to make them connect to the internet.

If you won't do that step, I don't see an advantage of having victron devices with bluetooth.

Maybe you should get to know the Victron offerings a little better. From a product range of like 1000 items, some are just bits'n'pieces, some with no comms, some with BT for the phone-addicted, others with wires for a central hub (several types of 'GX' hub), and then their cloud (VRM, which is free).

Uses range from a little battery charger that you kick around the garage floor, all the way through to massive industrial systems. Many mission-critical, so wire often favoured.

All this stuff under continual development. Victron understand the need for that, so it continues incessantly. Their own wishlist must be massive.

I use a 5kW system and access everything from a Win lappy. Monitoring, setting changes, firmware updates, cloud, Everything. And I haven't seen better elsewhere. Just waiting for it here, it's coming.. :)

Take a look too at the Modifications section of this forum to see what people do (or want to) with their Victron kit.

I agree partially on what you have said. Victron has a lot of offerings and there is also the VRM cloud. So far so good.

My post is about the missing Bluetooth connectivity for the Victron Windows App.

It might be better to have NO Windows App for the bluetooth devices, than an app that is not working ! And without a clear progress or strategy for years.

It just puts a bad image on the Victron company and their devices, even if they are very good.

Yesterday I've setup a "remote access" for the bluetooth charger. Having a Tinkerboard with Android next to the charger and now I access the android device using anydesk for the remote screen access.

The idea of having "NO Windows App for the bluetooth devices" would be a disaster. You would be removing the ability for countless people to use their Windows Computers to monitor and control all their VE.Direct devices which are visible via VRM (be they Bluetooth or not).

I rarely use the SmartApp on my phone to connect to my BMV-712 or either of my SmartSolar MPPTs, but use the single VE.Connect on the PC instead to make changes to these, as well as the non-BT VE.Direct BMVs that are visible on VRM.

Sorry, but just because YOU have no use for an Application does not mean it is no good and should not exist. As far as it giving Victron a bad name, the added feature Victron introduced to allow VE.Connect on the PC to communicate with any wire-connected VE.Direct device was a brilliant idea and one I would sorely miss now I have got used to it.

Yeah most definitely, I really hate to be loading apps on a phone, I'm older so my eyes are not that good, so I prefer big screens with big letters and numbers. Right now I have 2 x10" android tablets next to each other so I can monitor the charge controller and the smart shunt, is basically all I need to know but would love to be able to monitor both devices in one bigger screen such as a PC monitor. I can't hook up to them via cables because my PC is located elsewhere and walls and floors in between, A WIFI connection would be perfect and I really can't afford the nice screens and such that Victron has to offer. Being able to connect and monitor data would be great for folks in my situation.

Is Victron planning to recompile the Victron Connect App to target the new Apple M1 MacBook Air and MacBook Pro?