Victron SmartShunt as a energy meter?

Does anyone know where I can find info about using a Victron SmartShunt as a energy meter?

I have one being used as my battery monitor, and now got a 2nd that want to hook up to log DC charging from a non-victron solar/DC charger connected to it. With aim that can then include this in stats for day of PV generated vs Consumption, etc.

Went into VE Connect and under setting for the 2nd shunts I changed "Monitor Mode" to "DC Energy Meter", and then the "DC meter type" to "DC-DC charger". 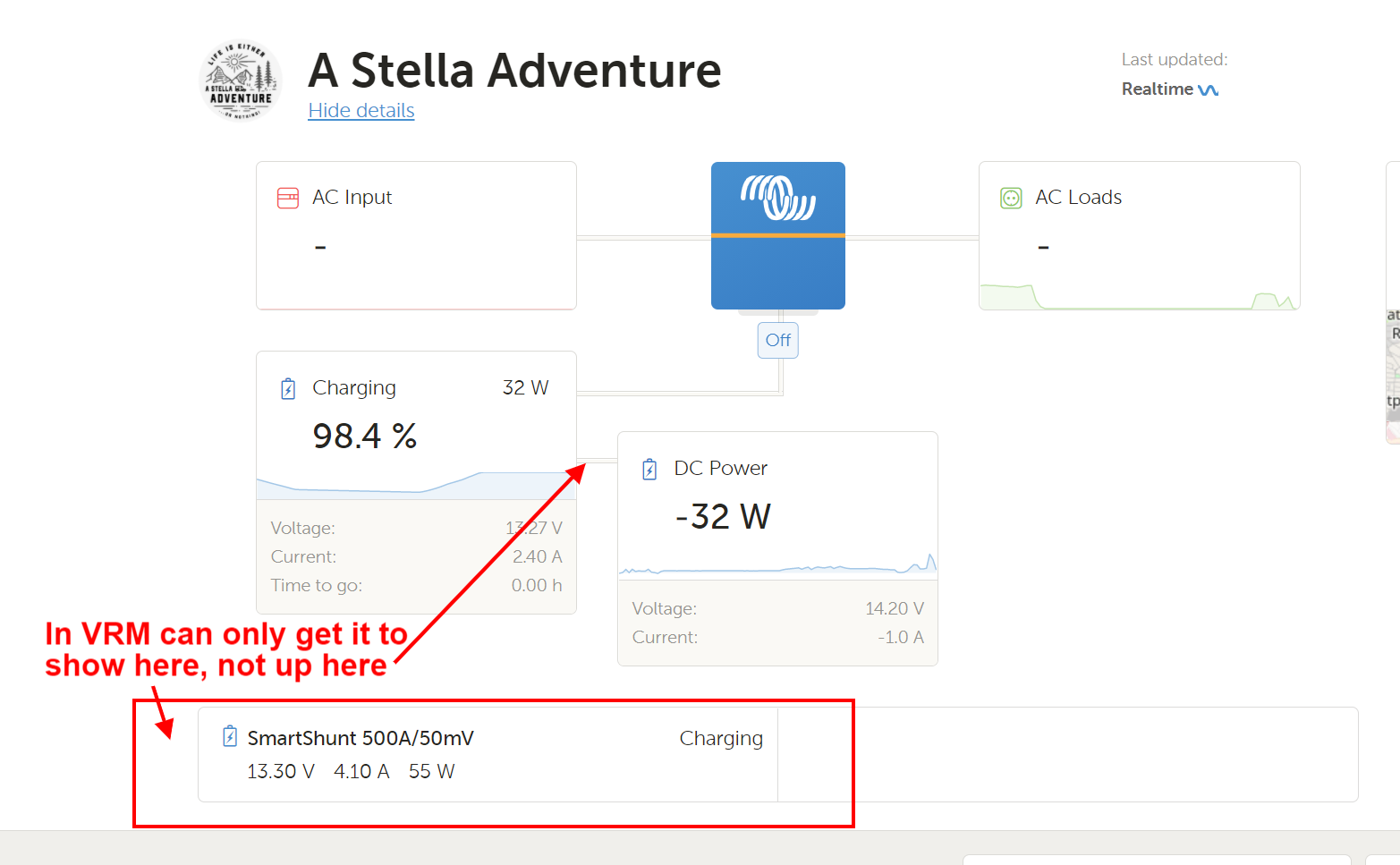 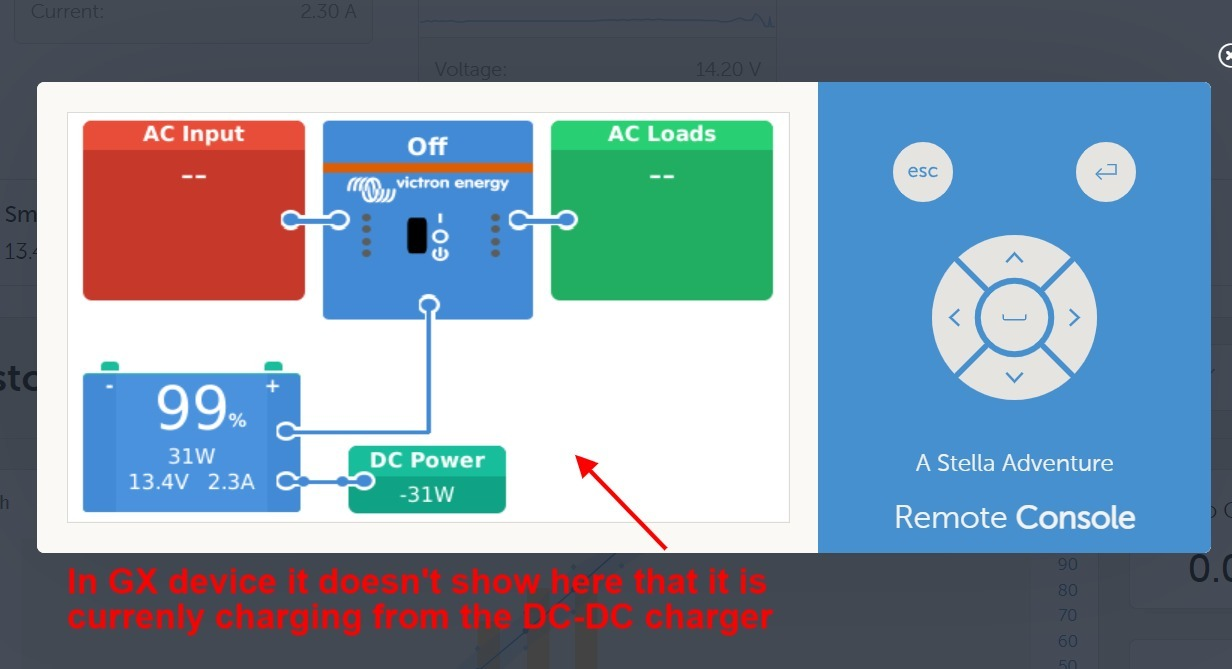 Searched for documentation for "DC Energy Meter" and "DC meter type" settings but nothing is showing in Victron help or in any forum discussions. So can only guess maybe this is a pretty new feature and most users haven't used or is still in development to integrate better with VRM/GX.

Anyone else successful in this or know where can find info on how to config/etc. Thanks is advance.

ryanlynx how did you got it to show on the bottom of the VRM?

I can only see my smartshunt on local gerbo device list and in advanced view in VRM.

And I have also set is as DC Source.

If I understood it correctly that feature is very new and not fully implemented jet.

I guess it will be official announced when it's working as intended.

Would be great to get some information on this, as I'm just putting two vessel into refit and willingly will buy a couple of smart shunts and the cables needed and do some testing with it.

Hi all, @Ryanlynx and @Jwfrary : yes, for now its just a small feature in VictronConnect. Nothing visible yet in Venus OS.

A bit of "expectations management" ;o) : for example for DCDC chargers, be aware that not all combinations and information will show in detail on the graphical overview. I think the first version will show it all on the Device list, and have it on VRM ofcourse. Next we'll work on improving the DC System box - as right now its a calculation, which can be a bit crude and wrong.

And then finally we'll work on something that shows details. Starting with the most common one, which is probably an alternator.

Welcome to explain a bit here on what you'd like to measure, and why you want to measure that specifically as well as what you're looking for in the information as a user. Ie will you be looking at it daily? Or just when you think something is wrong, or .. ?

Having that written down will also help me in instructing the designers as well as my own thinking around this. Thank you!

@mvader (Victron Energy) For my systems, (marine use) the main focus on the use of the Multiplus is to utilize the power being developed by the alternator on the main engine. We then auto start the generator with the CCGX or Venus GX depending on the boat, set to various conditions. These conditions are always a bit of a compromise as alternator output is variable compared to rpm so, when steaming the generator starts to early and when idling it starts to late!

The other thing is that we don't capture in VRM the energy produced by the alternators, and so its tricky to gauge how much power we are harvesting from the alternators over time.

So I guess for me there are three things I would like.

1. To get the data onto VRM as an additional input (similar to how a solar charger appears) at the moment, unless the system draws from the battery the alternator production goes ignored.

2. To have that data available to signal k / node red or some other mechanism so we can then control the generator start stop based on the difference between production and load and make it a little smarter.

3. View the input on the Venus screen, I guess as an additional DC box above the existing one!?

4. I guess DVCC would be nice, (perhaps even integration in some way with the wake speed regulator in the future and for Lithium installs I guess this would be very beneficial) but from my point of view its not essential as I'm using lead acids with internally regulated alternators which are set at a lower voltage output than the chargers anyway, I'm choosing simplicity and reliability over efficiency

BMV 712 for both main battery banks

(Smart Shunt to add on the alternator next month)

@mvader (Victron Energy) I assume the shunt goes in the alternator negative to battery cable and the usual way around!? 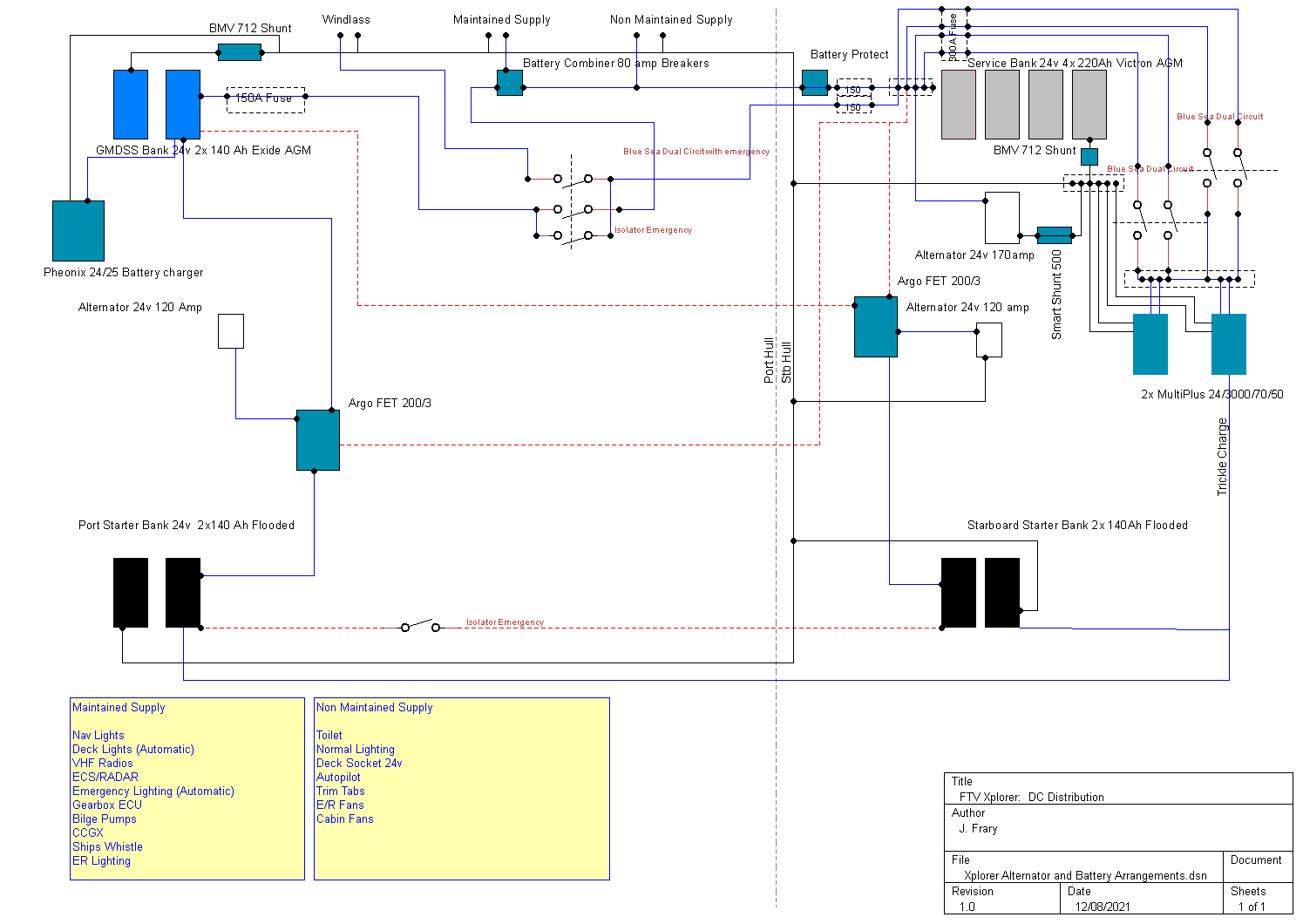 mvader (Victron Energy) ♦♦ jwfrary commented · Sep 01, 2021 at 09:49 AM
Hi, yes when used for energy metering it must be installed as written on the shunt: TO BATTERY goes on the side where the battery is. And TO SYSTEM goes on the side where either the load or alternator or other source you'd like to measure is installed.
0 Likes 0 ·

For the main shunt, the same rule will remain as always: make all in- and out-going currents and wires go via that shunt. Do not connect anything directly on the battery, since it will then not be taken into account in the calculations.

so each independent energy monitor are then accumulated and the left over that doesn't have a dedicated energy monitor is accounted for by the main shunt in my case that's the DC service loads and the multiplus.

It might be tempting to go crazy and have smart shunt all over the place!

Thanks for the reply to my myriad of questions

As @Jwfrary, I would also love to see an extensive node-red integration, specifically "charged energy", "discharged energy" and "reset history" to be able to create a daily summary automatically. I apply this wish for the BMV-712 too.

I think about buying smartshunts to monitor off-brand solar chargers, separate BluePower IP67 charger and a separate Phoenix inverter running system-essentials. All on the same battery bank as my Multiplus-II.

jwfrary mrhappy commented · Sep 06, 2021 at 08:05 AM
I have been thinking about an extra smaller inverter to run some of the essentials, like the CCTV and internet, but our systems are somewhat complex and having two out of sync AC sources is a bit of a no no HSE wise. 6000VA of inverter to run 400 watt of kit is a bit overkill.

The node red integration will come I think, there's lots of people working on it.

The new trends feature coming in victron connect might give you some help with the 712. personally our just get shoved in the CCGX or Venus and then disseminated to VRM.

mrhappy jwfrary commented · Sep 06, 2021 at 06:07 PM
CCTV and internet hardware is what I run on my extra inverter. That way, if I leave a cable out and the GFCI shuts off or even if the multiplus for some reason shuts down the cctv still operates and I can still connect to my raspberry pi to see what's going on and access relays through node-red if I'm not at home. Works fine so far, but I would like the phoenix to sync with the multiplus2 as they do share PE connection. I don't think it's possible though...
0 Likes 0 ·

48v-on-56north commented · Jan 12, 2022 at 06:30 PM
@mvader (Victron Energy) The ability to meter a non Victron DC source and track alongside Victron solar MPPT energy production would be an excellent bonus. Currently Victron does not offer a wind power ready MPPT. I use a non Victron MPPT that controls the power curve of a 3 KW peak windturbine. Then feed into the Lynx rail via a Lynx shunt. I can see voltage and current via VRM, but cannot get energy data. Nor see the power on either VRM or Cerbo GX display. Being able to configure a smartshunt / Lynx Shunt as a DC energy meter (Power/Voltage/Current) just like any Victron CAN bus solar MPPT would be a super feature. It would of course also work for any other non native DC power sources. Cheers, MK
0 Likes 0 ·

Something more basic (aka cheaper!) than a Smartshunt or BMV would be all that is needed for this. Really don't need 500A capability; or Bluetooth; or complicated State of Charge alogorithm; or a Relay; or a Display.

Just something like a 100A shunt that can read Amps and Voltage and relay via VE.Direct is all that I reckon 99.9% of folk would want?

@mvader (Victron Energy) , I just installed a SmartShunt to measure off-brand pv chargers. Working great to get the info into node-red when have it set as a battery monitor. I understand that integration is in the works, and I am curious about some details about your plans for choosing "DC energy meter" / "Solar charger":

1: Is the idea to make it show in the console as a PV charger with its own box?

2: Is it planned to make it accessible from node-red from a "solar charger" node?

3: Is there, as of now, any way to read values through modbus when setting it as an energy meter? (I do not find any such addresses in the ModBus TCP Register list)

mvader (Victron Energy) ♦♦ commented · Sep 21, 2021 at 02:42 PM
Hi, while I understand and appreciate your curiosity, I can't help now. The answers will all become clear once we release a Venus OS version that includes the energy meter functionality.

mvader (Victron Energy) ♦♦ mrhappy commented · Sep 21, 2021 at 03:32 PM
thanks! Be aware that anything you see right now will probably change. For example com.victronenergy.dcmeter is no longer existing in the new version.

I have configured two smart shunts as DC Energy meters. My SOC is based on a Lynx VE.canShunt. Really happy with the data that is coming out of the system (previously data was highly erroneous). Looking forward to more integration with Cerbo Main display and VRM - I am using the Alternator and DC System options on a Catamaran. If the Multiplus could display DC Power on the Cerbo main display my life would be complete ;-).
My config - Cerbo GX (version 2.80~29), 1180 A/H 12 volt AGM batteries, multiplus 12/3000/130, 1.5 KW solar with 2 150/85 VE.Can MPPT, 2 x hitachi 12volt 80 amp ‘unregulated’ alternators (soon to be fronted with two Orion 12v 30 amp chargers) and a 10KVA Cummins Genset. I have also configured 4 tank inputs, four temp sensors (2x Engine, Generator, and air), and a USB GPS input. Comms is via a Teltronik GSM Router. :-)

ET340: How to reset the total kWh counter?