Hello and good day to you all,

I'm considering using the Smartshunt 500A in a fair amount of boats so I did some testing. I setup the Smartshunt and a load. Started logging over VE-Direct storing the 'SOC' and 'Current' every second or so and made a nice graph. With the settings I made in the Smartshunt I tried to do the SOC calculation myself using the current and timestamps from the log file on the Peukert equation. I managed to get an exact match but only after I changed the 20hour discharge rate to 10hour (leaving the amount of Ah filled in with the Smartshunt and my equations the same). Can anyone confirm that the Smartsunt calculates "Peukert_t = dr*(Ah_rated/ (current*dr))^peukert_constant" ? where dr=discharge_rate=10 instead of 20.

I added the graph I made for reference. It has a load I changed a bit while discharging and added a little bit of charging at the end. I do regret rounding down the SOC numbers from VE-direct though. 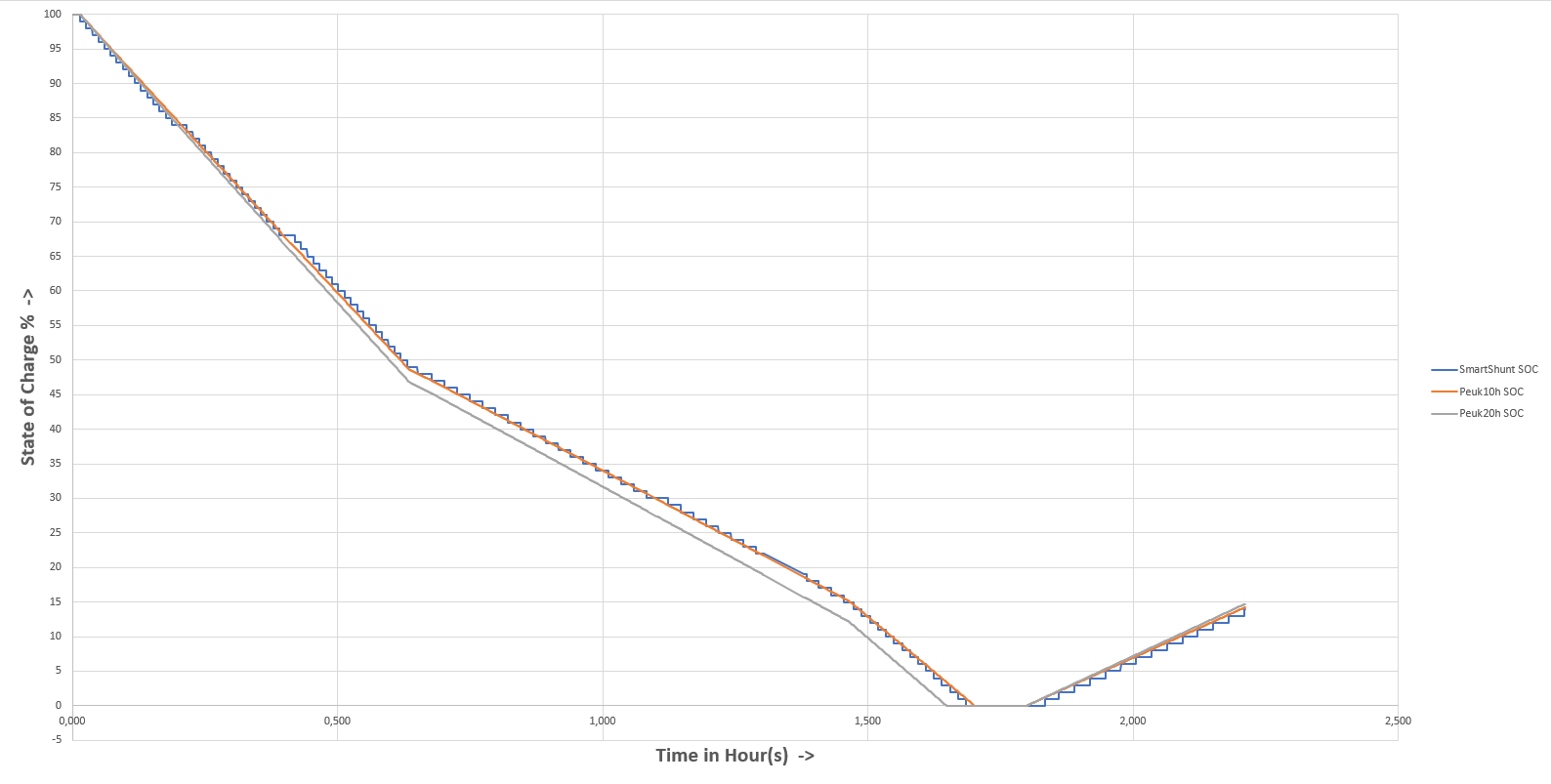 You are trying to compensate for what the Peukert actually does in the calculation. It is a logarithmic change based on discharge rate.

Peukert’s equation is stated below:

Cp = In x t Where Peukert's exponent n is:

The page mentions it but Victron does have a Peukert Calculator available for download.

Discharge at 2 different ratings the difference is normally the Peukerts.

Yes, I'm trying to replicate Victron interpretation of Peukerts law to be sure how it works to be able to inform my customers well. Simply using "Cp = In x t " to get a consumed amount of energy does not yield the same result as the SmartShunt. I did try it using the extra light blue line in the graph. 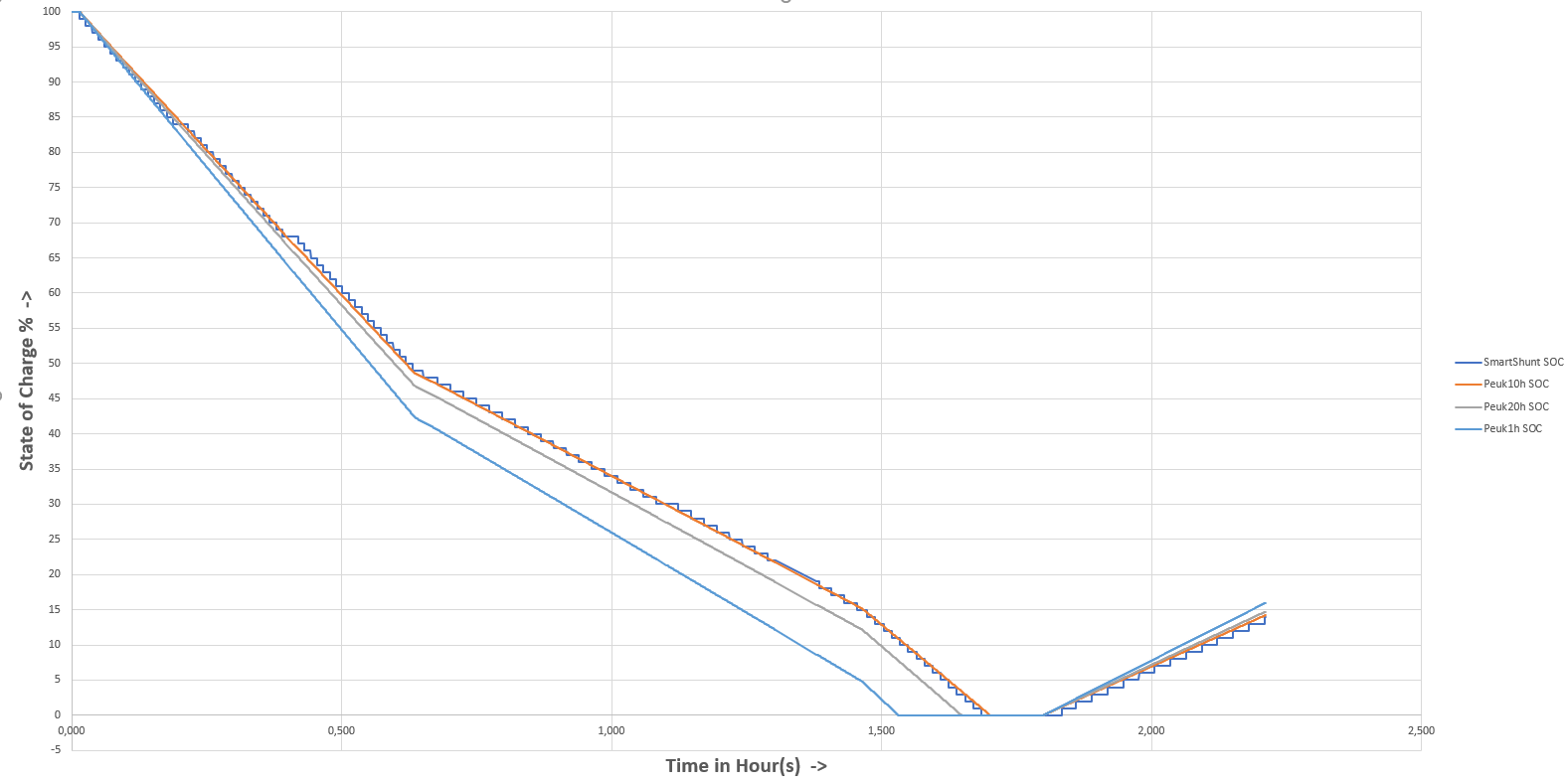 There's a bit of well-written stuff about Peukert here. Look in the index there too for more.. http://www.smartgauge.co.uk/peukert3.html

Knowing what number the Smartshunt fills in for this value would be helpful.

The formulae Victron use are in the manual.. https://www.victronenergy.com/upload/documents/Manual-SmartShunt-EN.pdf See Section 8.

You have more patience than I. Unfortunately Peukert doesn't compensate for Temperature, and this may well change what it should be over a range of batt temps. Almost winter solstice for me, and I found the need to raise the Peukert a little to compensate for a ~15C drop in batt temp. Started with Charge Efficiency, but when that reached 'unlikely' stage, I reverted to Peukert. I have it well tuned, with very reproducible SOC, but that may well have to change again when summer returns.

Given you're deep into this, check out VictronConnect. There you can change Peukert and have it recalculate over a period (I think since the last sync). You might find that useful for a pragmatic approach..

Wauw, thank you! I will have a look at VictronConnect.

SmartShunt SOC Goes Back to 100% SOC at (Seemingly) Random Times

Do I need a shunt with Multiplus ?