After some time wondering why my "DC Power Consumption" some times report incorrect values in the dashboard i started trying to figure out why.

While running on battery and no or a small load on the inverter, the "DC Power" reports a power consumption of approx. 23w or 46w more than that the actual power used displayed on the battery shunt on the Venus and in VRM.

Display when inverter is loaded with approx 12w(bulb) + 6w of inverter idle consumption: 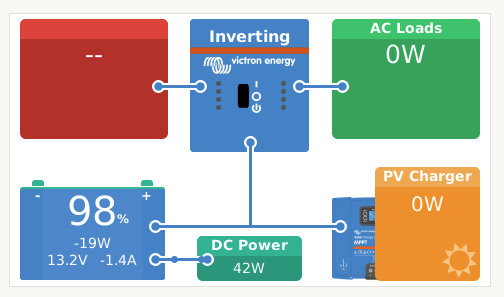 (The shunt reports correct all the time, checked with a clamp meter)

After some peeking into `dbus-spy` i think i've found the issue, and it seams to be that the inverter reports between 0 and -0.2A load on `AC/Out/L1/I` when idling, reporting -0,1A on 230v will report to -23w of usage and shown as 42w( -1*(-19+-23) ) extra ont the "DC Power" block in the UI. This is also the reason why the issue disappears when the inverter is loaded, as this negative reading then will be gone.

As for now it looks like the current reading on my inverter could be out of sync inside the device, or that it just displays incorrect values when idling... Is there a way to get this reading "in-sync" again (a form of calibration?) or something else that could be done to make my reading more exact? eg. ignore current readings bellow zero from the inverter ? as the inverter have no way of generating back power there should never be a negative value reported on the AC side.

Anyone have an advice for this issue?

i dont know if it is the most correct solution, but i modified my dbus-systemcalc.py to ignore inverter currents lower than 0.0A and it seams to do the trick for me at least. My Inverter can never deliver power back from the AC side so for me this is a working solution: patch follows:

I can confirm, that I'm having the same issue. Thank you for that fix. Will try it asap

Applied a similar fix. Thank you. It's the end of 2022 and still Victron has not done anything about the issue. I'm starting to suspect the VRM isn't as useful as one would hope it to be...

more output power needed for off-grid system with a multiplus