I'm chasing another problem with this system, that I haven't been able to pin down. I'll give you a short amount of background, in case it's relevant.

The system originally was 2 quattros in parallel, 10 Victron Lithium batteries (300ah) and 8 100/30 mppts. I share this, because I observed in the previous setup before anything was removed...nearly 60amps charging and the owner at that time stated that it would get to 100 on a bright sunny day with no clouds.

As part of buying this boat, the previous owner took one of the quattros and 5 of the batteries. I have replaced that quattro since, so now the setup is

Here's where the issue comes in. In the middle of the day, when the sun is directly overhead, and I'm generating 1600 watts of soloar (as measured by the quattro on the cerbo screen) - I will barely reach 20amps charging, usually less. My idle draw is about 15 to 20 amps, but its always been that, so observing 60, means the production at that point was 75 to 80. Right now I'd expect 133 amps raw, before any loss or conversion or vodoo that happens between components. I think it's reasonable to guess while generating 1600 watts of solar, that I should see 100 amps (mins 15 to 20 idle)....Am I incorrect?

I know that the mppts will downscale, I've appropriatly measured the battery SOC so they should bulk, measured the temp so there are no temp issues (unless there's some settings that arent correct), and I have access to all the MPPT's through the VRM for their settings if those need tracked down.

I also know how complicated all the settings can be between MPPT's, quattros, batteries...etc. So I'm looking for some help tracking it down. I can been the hammer, just need the person to wield the tool and get me there, or tell me it's working as intended.

Thanks in advance, I love this community and how everyone helps.

P.S - If there's a victron "expert" in the area of Caribbean Martinique (or you are available to fly in) I would absolutely love to talk to you.

This is about the point where it starts to look seriously out of wack to me, but that’s where I’d like help understanding...if it’s just my lack of knowledge. 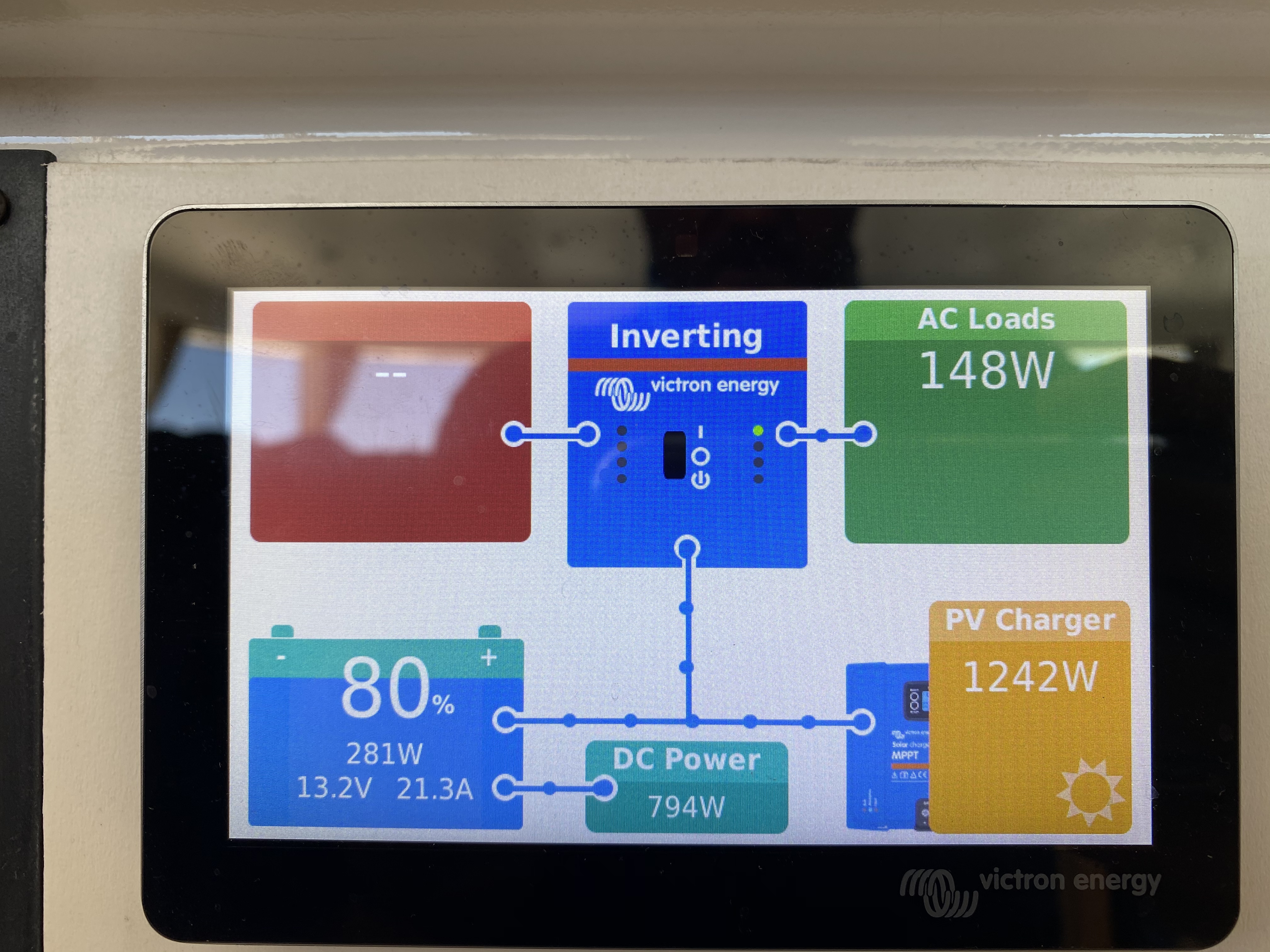 There’s a 10amp AC load, and I know I have a 25amp DC idle just for the fridge, so I’d expect maybe to see 60 or more amps into the batteries and that’s conservative?...as you can see, it’s barely over 20.

In your OP you did not mention that big DC load.

Your panels are producing 1242W.

You charge the battery with 281W.

These 167W are used to power your devices (especially the inverter) and to supply 148W for the AC loads.

For example, if you look at the screenshot with the genset running, the DC Power is through the roof...but I believe that’s because it includes the 177 amps being used to charge the batteries.

I didn’t mention the DC load because I’ve never read that box as “load” - maybe I don’t know how to read that box.

But as pure load it doesn’t make sense to me, because my boats requirements are always pretty much the same. As it sits now when I’m generating zero PV, the DC power still shows only 80 watts, when the PV ramps up, the DC Power ramps up also respectively. 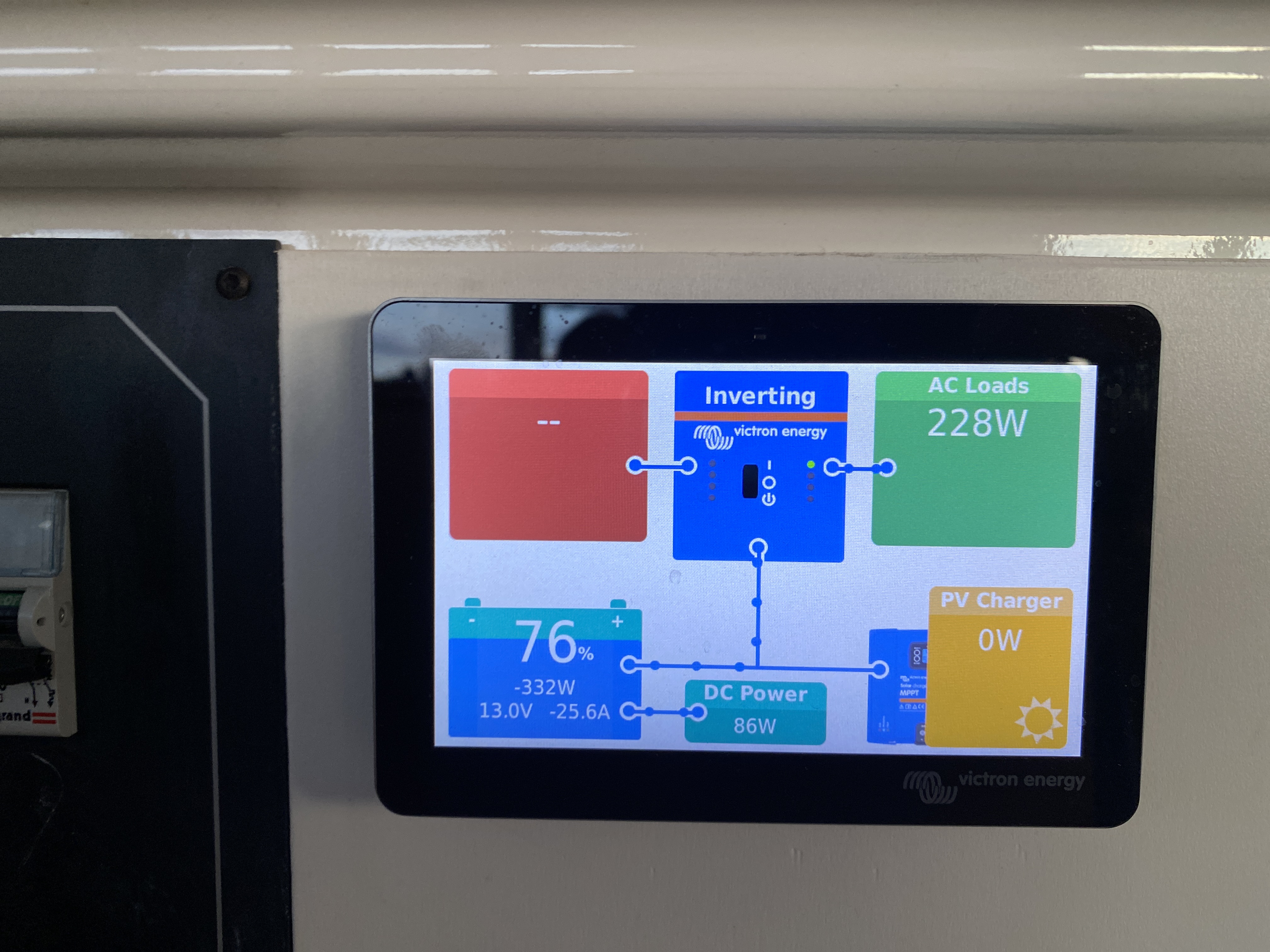 The power requirements are the same basically as the previous screenshot.

Help me understand, it seems like you’ve got a good handle on it.

Could you draw a wiring diagram of your system? Even by hand, but make sure to include everything.

Ok, as a follow-up to this, to hopefully make some headway, here’s maybe some more info....

If maybe someone could help me line up the numbers to verify they make sense, then maybe we can put this one to bed? 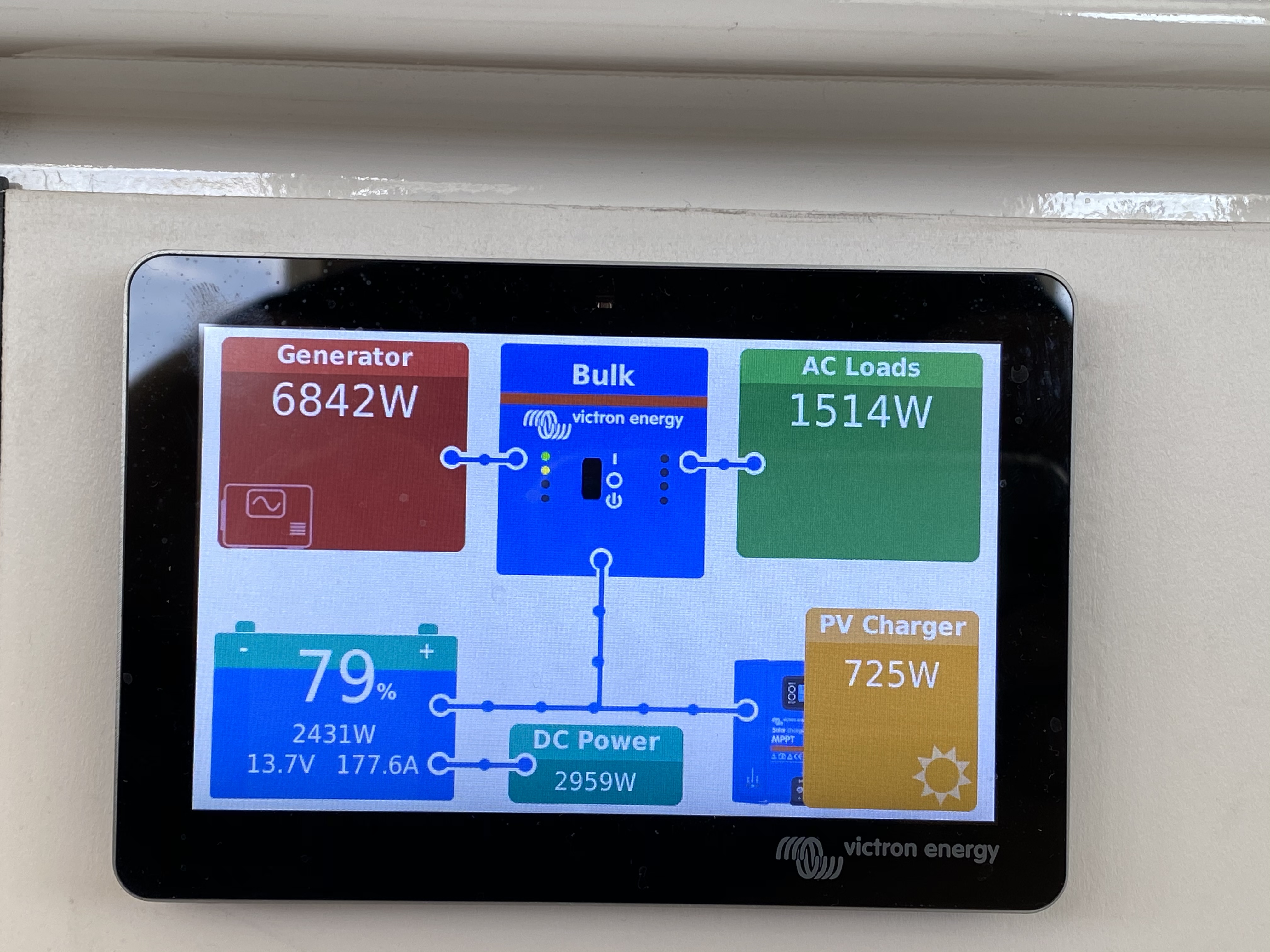 Generator running, mid morning partly cloudy. These numbers look appropriate to me, though I have no idea what DC Power is actually a measure of. It goes wild when the generator starts.

As an added bonus, in the system setup, if I change the battery monitor from the BMV-700 end set it as the Quattro, the solar amps look 100% correct, but it appears I lose a lot of tracking by doing that and I think I read is incorrect overall.

Any insights? Thanks everyone for the continued help.

You have all 8 mppt connected to the cerbo with ve-direct cables?

Can you see 8 individual mppt in remote console?

Set the BMV700 as the battery monitor.

Yes, that’s correct. Each MPPT is connected to a USB hub via a VE direct to USB. Then the hub is connected by a single cable to the Cerbo.

I can see all 8 mppts, and can see individual watts, history...etc on the cerbo and on the VRM remote.

I was pretty sure the BMV should be set as the battery monitor, thanks for that confirmation. :)

Yea, I have a pretty good setup for instrumentation. I can get my clamp meter out and start probing around.

What about the other side? I wouldn’t think voltage and amps at the panel would be super relevant in this case, because of the open volts vs loaded, and the change tracking.

Should I measure at the mppt on the panel side where the panels are aggregated into multiple connections to a single mppt?

You can compare power in (from the panels) to power out (to the battery) for each MPPT.

Measure the power into the battery (or out of it).

Power drawn by the inverters from DC bus.

Power supplied by the inverters to AC loads.

Power drawn by the inverters from the grid/shore, if connected to it.

Power drawn from the battery by any other DC loads you might have.

So your Cerbo displays 1600W from PV panels/MPPTs and only ~240W going into the batteries?

With no AC loads on the inverters?

That's correct. If I put AC loads on the system, sometimes there are different load amounts, but the numbers wont add up, the watts / amps going to the batteries are always a lot lower than I'd expect. Any help on where to go look to start to track stuff down?

There are some loses, but can't be that big. So most likely some device is not measuring correctly.

Do you have a clampmeter to compare the currents shown by each device with the actual (measured) current?

And at the same time measure the voltage with a multimeter.

How can I disable battery charging on a multiplus compact?

What is the best way to prevent charging Tesla battery when too cold?