I have on board a Victron Centaur 24v/80A charger charging a bank of 2x2 12V/225Ah lead acid batteries. Recently the batteries started to heat and loose water, when I went to diagnose I found out that the charger is outputting 29.8V regardless of dip switch setting. I found that there is a potentiometer inside and tried adjusting that but I could only reduce the voltage to 29.6V with strange pulsing noise from internal SMPS like it is running on minimum pulsing. I cannot leave the charger like this,it will destroy the batteries. Did someone encounter a similar problem? Is there a solution or should I just buy another charger? This one is about 4yrs old so if its gone already I think I will consider another brand. The one I replaced lasted over 12 yrs. Oh,I tried replacing the batteries with another bank new batteries but the charger is still outputting 29.6V.

BMVMILOS - have same problem before I fix it. One outlet 31.9, other two 30.55. Playing with deep switches and small poty not help me a lot. You has to put on both printboard ( similar one is below ) potentiometers full clockwise. Now I have 28V outlet. Hope that will help you

What are the switch settings suggest you try the gel setting to reduce the voltage.

After you change the switch's please turn the unit off at the mains input and then back on again.

you could also try one of the other battery outputs as any of the 3 outputs can be used. Just in case there is some issue with the one you are using (worth a Try)

If you still have a issue then please take the unit to a Victron agent, with your original invoice,

Victron look after there customers very well, So if the unit has a fault then the charger can be repaired and it may not be very expensive.

The latest units are covered by a 5 year warranty, this started as of Jan 2015 so it may still be under warranty as well. that's if there is a issue with the unit.

Hope this is of sum help 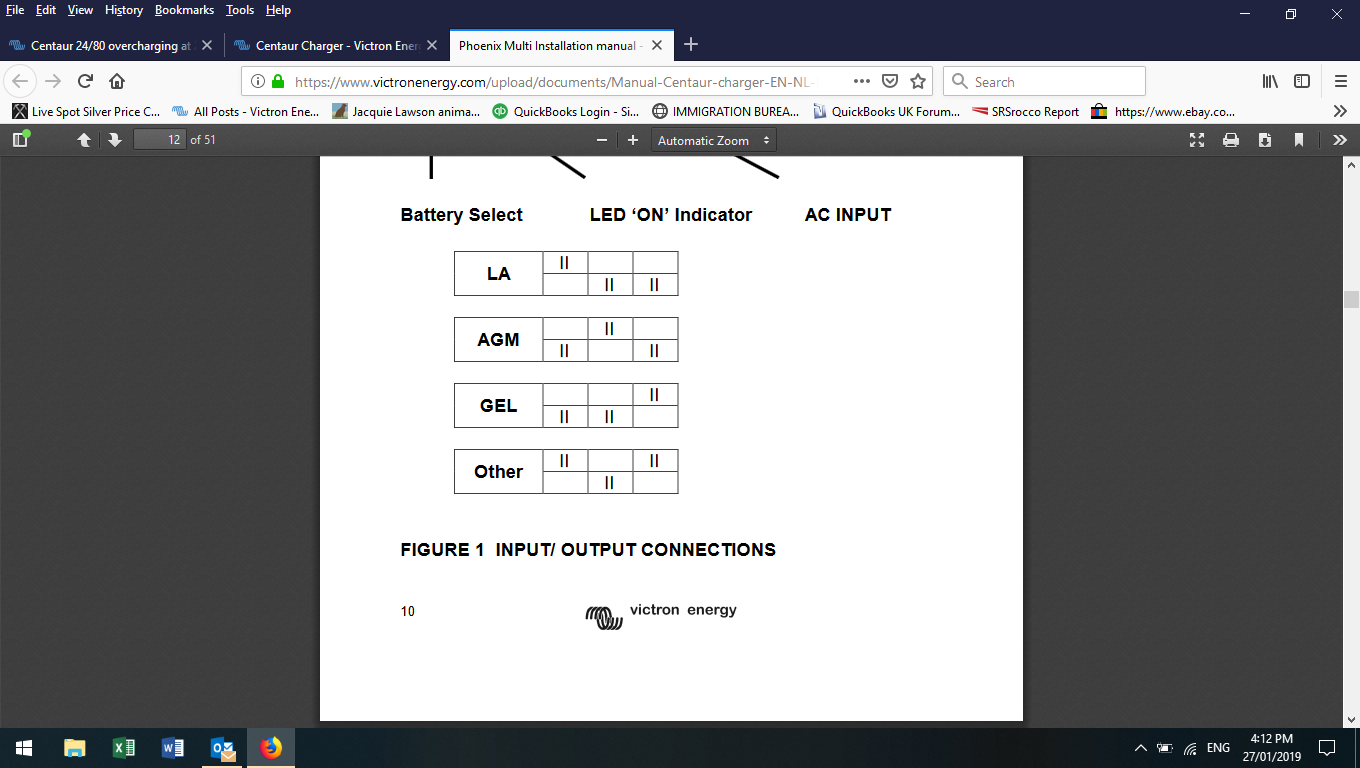 I have tried other dip switch settings, with switching the unit off and then again on, but the charging voltage is always 29.6V regardless of dip switch setting, it does not change a bit. The other two outputs measure over 32V, it could be that this is because nothing is connected to them. Tomorrow I will try to connect to a different output and see if that helps.

if the other outputs are 32v then the unit is not regulating correctly, take it to victron agent to be checked and repaired, would be my suggestion.

Have same problem before I fix it. One outlet 31.9, other two 30.55. Playing with deep switches and small poty not help me a lot. You has to put on both printboard ( similar one is below ) potentiometers full clockwise. Now I have 28V outlet. Hope that will help you

I was also getting very high voltages. Already fried one set of LA's that came with boat that were about seven years old. But when I replaced them with new Trojan T105's, the old standby, I found myself still getting batteries that were way too hot . Output never below about 31 volts. Took about four hours to get hot enough to really notice. Luckily I had solar array of 560 watts to keep batteries floated correctly but had to keep charger off. Whenever I put it on, it always resulted in overcharging.

Following on from Denis post above, I dissembled charger board and as per post, trimmed down pots on BOTH boards - having to apply mains to stage one board, trim, then reapply mains to board two output. For the first time since I've owned the boat, the voltage output seems stable and is correctly floating batteries.

Now the reason I post this is two-fold... Firstly, while somewhat daunting in the dissassembling, stick with it because it's really only hard the first time. The second reason for the post is to counter the view above that Victron is in any way responsive or caring about their customers. Here in Townsville at any rate, and while I'm used to bad customer support "way up here", the Victron agent here was uniquely unhelpful. At least they were honest - they had no idea, and further, had no idea where to go to find any answers. They were a SALES WAREHOUSE, and had no clue as how to service the gear they were more than happy to sell. They really did not care. Nothing more than "they are in Holland, maybe send them an email". Terrible.

So stick with it, get out your meter, and tweak, tweak, tweak. The turnpots near the fan voltage feeds will do their job, as Denis has indicated above. I found it necessary to completely remove the output board to get to the lower board - they are identical. Once you have it figured out - all the screws, nuts, etc., it's actually quite straightforward.

6 People are following this question.

Pwm light 20a no longer in taking solar