How much airflow per watt of inverter load?

As much as I'd love to mount my Phoenix 12/1200 in free air, it just has to be in a compartment. I can add all the fans I like, though. How much is enough?

Hey, that's pretty similar to the TDP of an average PC, which is adequately cooled by a pair of 25cfm case fans, so I figure something like 50cfm ought to do it. I'm looking at a fan rated at 62cfm, maybe I only need one of those.

There MUST be a more rigorous way to figure this, but all the formulas I find require you to know things I don't know, like the thermal resistance of my heatsink. (Okay, that's internal to the Phoenix, and anyway, it has its own fans so I'm lost at how to even begin.) Does my cocktail-napkin math sound sane, at least?

Also, since I don't have the unit in-hand yet, does anyone happen to know which side of the Phoenix is its intake and which side is the exhaust? The manual says not to mount it with the fan on top, but I can't tell from the photos which side that even is.

The fan is at the same end as the DC connectors. 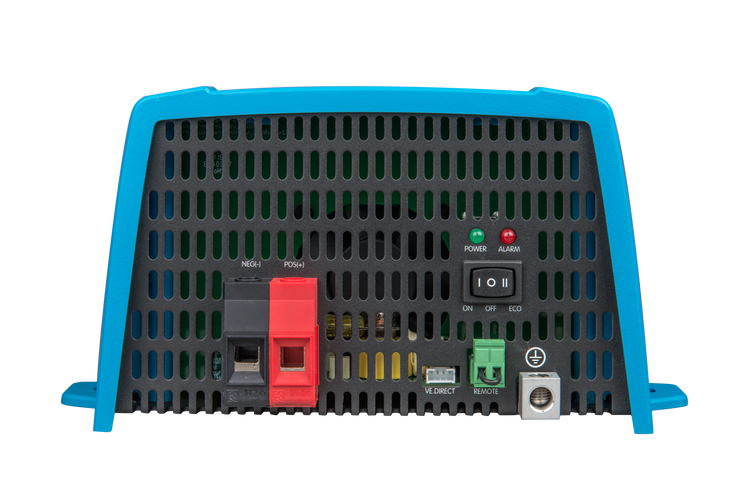 Also inside there you can see the fan. The height of the case is 118mm, so I can't imagine that being more than 80mm fan, probably more likely to be 60mm.
So, if you ventilate the space with more fans of the same size or a larger fan than the one inside the Phoenix then you should be covered.

Phoenix Inverter VE.Direct: 32k or 64k firmware image, which one do I need?