My recently installed system has a colour control which reports (contradictory) ve.bus battery state information from the Mutli's and a 3ph PV inverter in off grid configuration. With All output MCCB switched off, there is a constant +-100W (2A) draw indicated in the battery symbol in addition to the L1-L3 standby load. This discrepency is also not included in VRM portal output.

Going into winter this unplanned loss will significantly affect the battery SoC. Is this indeed an undocumented standby consumption within 3ph configuration of the Victron inverters, or is the in built BMV reporting incorrect info?

Depending on the inverter model and settings there is a loss between 50 to 100 watts, Please read the spec sheet on the unit you have for more details.

there is also a AES Feature that you can turn on that reduces the Idle power consumption, so you could try these settings to see if that helps you

you will need a MK2 and VE config software to set this up,

Hi Paul, thanks for your input..

I referred to the manual and AES function is only applicable to a stand alone operation. I understand there are 10-20% losses by the inverter but a constant 100W drain is evident even with Zero Load.

The Multi's zero load draw of 11W per phase is indicated by AC Output of CCGX and confirmed in the manual. The Fronius MPPT standby is approx. 7W per phase. Hence with zero load total theoretical battery draw should be 18*3=54W but actual is 154W.

I have programmed the Multi's with Mk3 and ve.configure and all parameters seem correct. Thanks

The CCGX accounts for up to 10 watts of DC consumption off the battery. Are there any other DC loads in your system that might account for the differential?

Hi Kevin, thanks for your reply.

The indicated battery consumption and SoC are measured by the built in monitor of Multiplus II. Therefore any DC loads connected before the multi's will not register as a load on the CCGX?

There are no other connected DC devices in my setup.

From your desciption, you have a "closed" DC system and all power in and out of the battery are accounted for with the Multi's internal monitoring. (The Multi is the only charger and only load on the battery.)

It's only loads connected to the battery that won't be counted.

You are good to go. 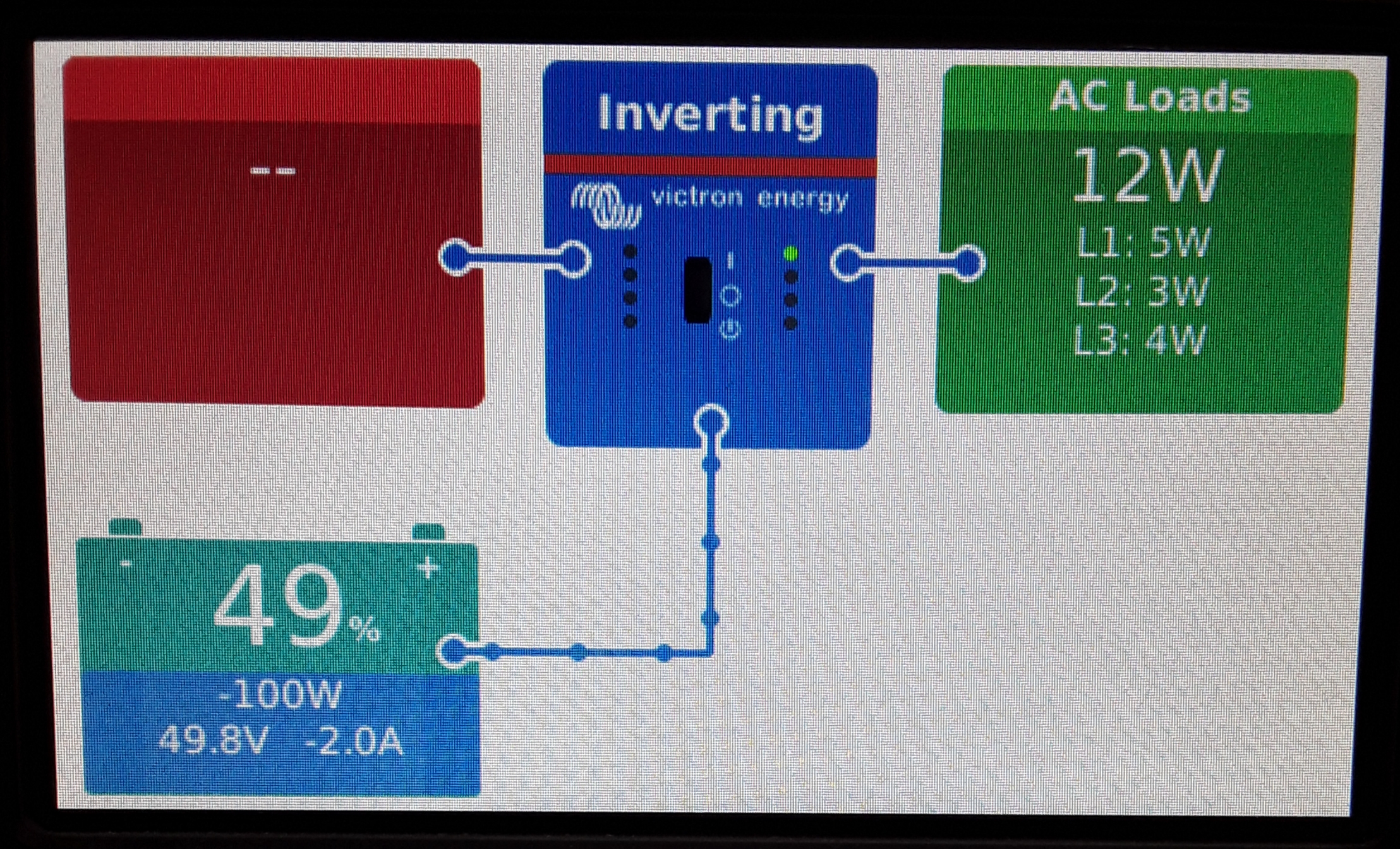 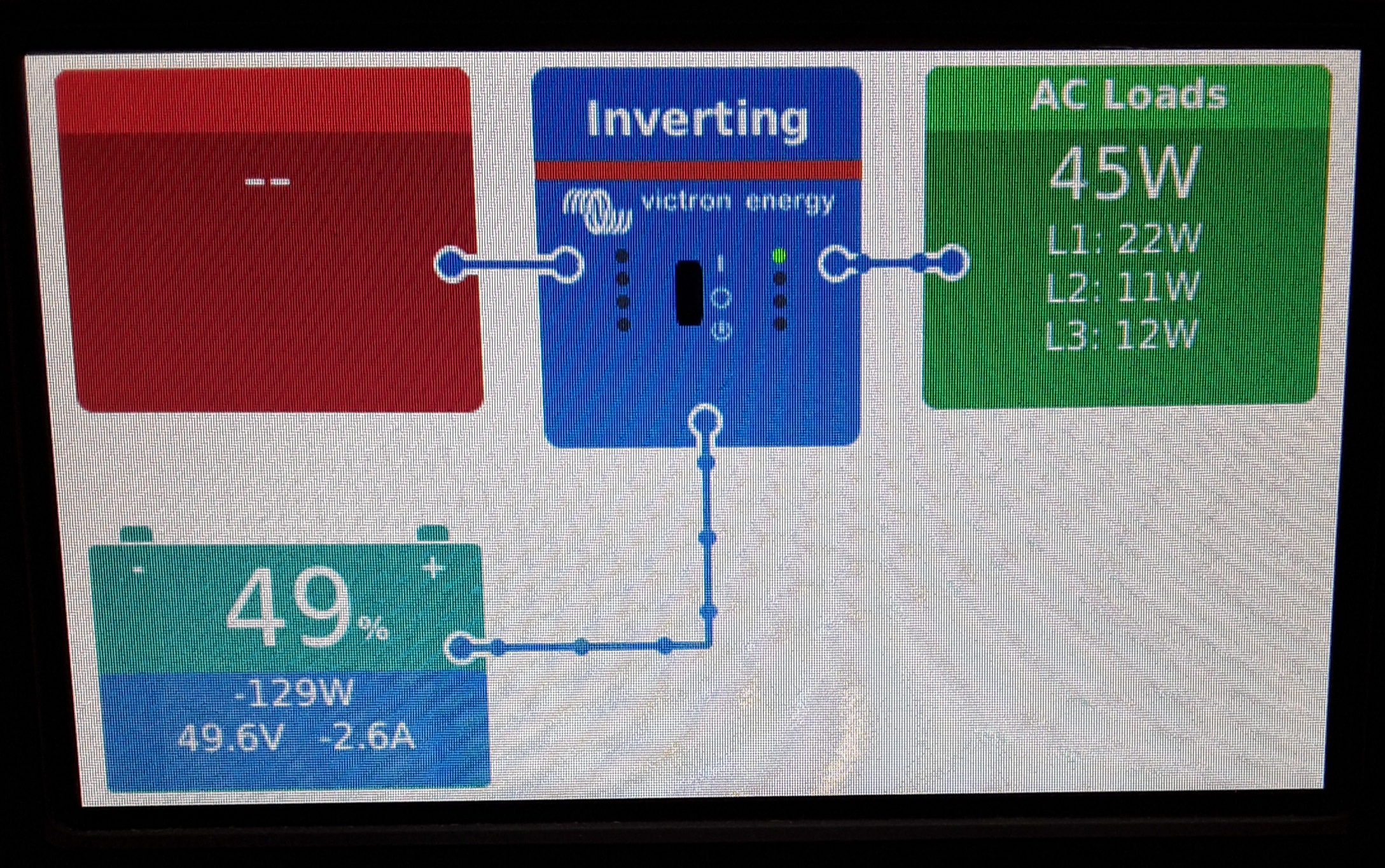 This reading as above, but with Fronius Symo connected in *standby mode, a 33W measured difference.

Today I noticed another measured loss, from the AC2-Out programmable relays, when on with no load, each utilise 7W!

So now my battery bank needs to endure an unaccounted standby consumption of 33W + 21W and then a further 90W which cannot be explained...this is a much higher standby usage than was specified in technical sheets, and further much more than the battery system was spec'd to handle.

If anyone has any advise or input, please let me know!

what components does your system have? how many / what model inverters? does it have a BMV?

Im using the BMV thats built into the Multiplus.

the Multiplus only has a rough calculation of DC currents, so at low power, the numbers are not very accurate.

The battery SoC as displayed by the ve.bus connected Venus GX- does it calculate based on the primary Multi or use data from all 3?

it uses all Victron devices: