Since adding tank displays to my CCGX, I find I spend most of my time on that screen. However, some items visible elsewhere are not included. Specifically, AC INPUT and SYSTEM info do not exist. In addition, space within most tiles is available for other parameters such as voltage, current and frequency. The revised display looks like this: 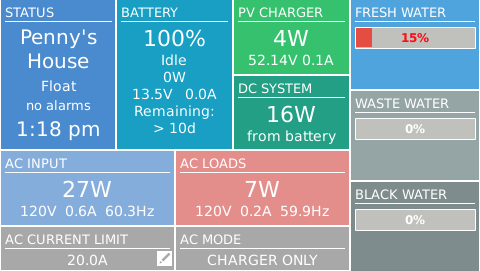 You may notice the PUMP button is missing. I've made it dynamic. That is, it appears if the relay is configured to control a pump. Without the button, there is more space for tank displays.

The following is a GitHub repository for the OverviewMobile.qml file that implements these changes. It's a substantial rewrite from the existing code to make future changes easier.

I should note that if there is more than one Inverter in the system, this screen only shows voltage, current and frequency for the first one found. Power, however is provided by system services and I believe combines info from all inverters.

I haven't added additional pages but it should be easy.

Create a new overview page using any of the existing overviews as a template. Then add the new page to the ListModel in page main.qml. That list contains pages that are always present.

If you want the page to be dynamic, search for extraOverview. There are three in this file that should get you going

I'll try that thank you. I did try as a test yesterday running your enhanced page as an extra page but just get the magical white screen grrrr! If you do ever do it please keep me informed as I will you and this post if I get it working lol.

Thanks for your previous help. I'm afraid to say it didn't work grrr.

I even tried adding it in main.qml where I spotted some overview links but still nothing??? If you have any other ideas they would be greatly appreciated.

Still no joy I'm missing something I'm just not seeing what it is?? I've attached my attempts files if you get a chance to have a look? I have managed to make a new page in the main menu called switching but cant seem to get a new gui page for the switching. I haven't even managed to get your enhanced page to work as an extra GUI page?

Any tips info help would be greatly appreciated.

Remember that I'm no expert on QML or its use in Venus but a quick look:

There's a correlation between Component { PageSettings {} } and file names. The above references PageSettings.qml So if there's no PageSwitching.qml file in the same directory, you'll probably get nothing on screen an error in the log.

I don't think you can put the MbSwitch items in the VisualItemModel.

The test in main.qml that activates OverviewMobile.qml is based on a setting controlled by Show boat & motorhome overview in Settings/Display & Language. Your extended mobile overview tests a different setting which will fail if that setting doesn't exist. I'm not sure if this will cause the GUI to crash or just report an error to the log.

As a baby step, add the following to the ListModel in main.qml:

and make sure the file has that specific name

That should make the enhanced mobile overview page appear even with the switch for the main OverviewMobile turned off.

If you want the enhanced mobile overview to be dynamic, you would need to create a new dbus service in /Settings and hook it into a GUI item (or control it from dubs-spy).

Your file names need to have .qml as an extension (not .txt).

Thats awesome thank you. Ill try that shortly, The pageSwitching.qml is in the same folder as the other .qml files. It works fine in the menu but you have to press the screen then press menu then scroll down to the new switching page then select it. which is why id like it on the GUI so you can just swipe to it. in OverViewTiles2 (renamed until I get it working) It shows the switch but cant use it?

I had to make the .txt so I could upload them onto here, but thanks for the heads up.

Your a winner thank you so much, that worked a treat :) now i just have to work out the switching side of things........

I saw in one of your posts about relays. I have managed to configure the RPI to run up to 8 relays. Although if using Rob's Stetson then 6 as mentioned.

Remember 6x is the max as you use the other IO it will interfere with the the functions of the SPI ports and I2C ports etc. so you could lose functions etc.

Attached file for the rspi backup required it includes the extra data on the mobile page which Kevin Windrem has done.

You could add in the 2 temp readings at the bottom of the tank readings, which would be very useful? As the hardware is in place just cant view it only by going into the device screen.

I know Mark is going to add a relay screen with 6 relay buttons which can be setup to do any function and be renamed as well to suit the applications required light switching, PV tilt motor control, loading ramp etc.

How did you get around the missing files as above as i am doing some updates for the temp sensors to be added etc.

Can you advise, i am using QT creator.

All my code was edited by hand rather than using Qt creator. So ???

My enhanced mobile overview was modified from Victron's original file and I didn't touch anything regarding imports. I see no import errors in the log and things work fine.

Not sure who was asking about temperature sensors. Wasn't me.

It was me asking about the temp sensors, as i developed a raspi hat which combines most things that a GX does and some more, We have 6 relays outputs etc.

If the 2 on board temp sensors could be added below the tank sensors that is one request a lot of people have being asking about.

It should be possible to shorten the tanks column and add another tile below it to support the temperature sensors. Currently, the tank column's bottom is anchored to the top of the acModeButton if the pump button is enabled or it's bottom if not. Look in the ListView id:tanksColum (yes it's misspelled).

Thanks for the advise. You have done a great job on this screen, as it gives a lot more visual information than before as this has being requested for some time which Victron have not done. and lot of people have asked for it now this will finish it as complete.

Thanks, I think I'm going to swap this out.

I recently started testing an ESS configuration and discovered the display of ESS "reason codes" on the GUI. I had to go look up their meaning. So to avoid this in the future, I modified the Mobile Overview page to display text for these conditions. I also combined merged the "reason" line with the "notification" Marquee to save space. It's unlikely you'd have both at the same time but if so, you'd want to scroll all reported conditions from both mechanisms.

The changes are here:

I tried to get your enhanced Mobile Overview from provided Github link. That link is not valid anymore. Could you please provide the files to me?

Found it by myself https://github.com/kwindrem/GuiMods

Here is new one in the pipe line were are devopling with all Kevins enhanced mobile, but we are going to do a separate page for the relays and tanks and temps readings etc. So the relays can be named etc, at the moment when you touch the relay it pops up and shows the relay state and you can turn off and on from there. 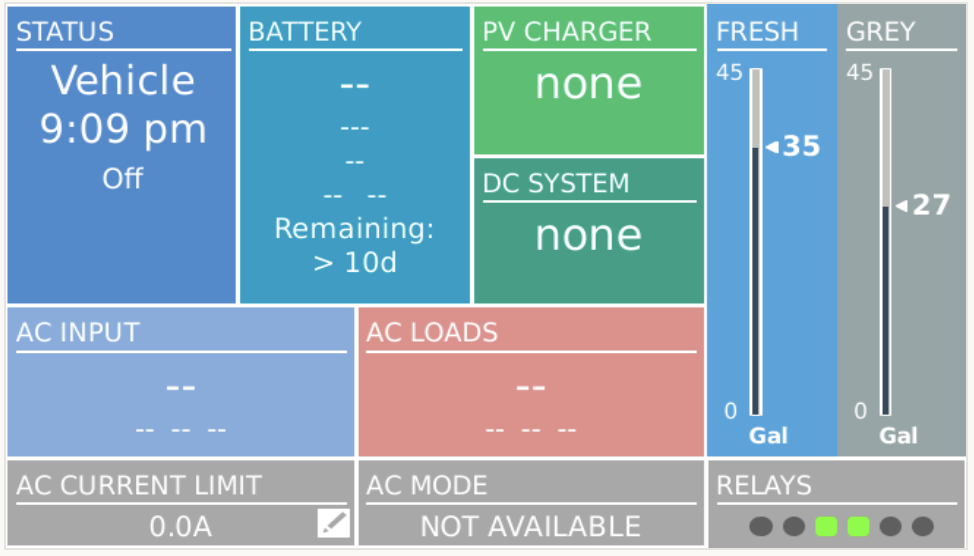 Looking good mate, I have managed to rename the relays but in the same way I did it before in the code, like the relay page in settings we made ages ago.

Correct but we plan to have a relay page with options to rename from the screen not the file in Venus.

@Kevin: do you intend to further develop this? I would be a nice framework for custom tiles, adding more parameters to tiles etc etc. I have some wishes in this respect.

Any suggestions on resources howto create/modify tiles within your GuiMods rewrite myself?

The Mobile Overview is a nice screen to show most things in one place for a mobile installation where you PV inverters aren't likely. (The original layout did show a PV INVERTER tile in place of AC INPUT.)

Space is limited and without a major layout change (e.g., modifying the tile title area) there really isn't much more that could be added. Replacements are fairly easy.

For RVs, at least in the US, displaying AC in and out info for an additional leg could be essential.

STATUS takes up a lot of space and there may be other things that would be more important. E.g., GPS for a boat. The first thing I'd remove is the system name.

I have considered moving some generator stuff to this page. Probably just status and manual start/stop. It would be an either/or for the PUMP button that shows up at the bottom of the tanks column if it's enabled in settings.

Some real estate can be reclaimed by modifying the tile titles. For example, the line below can be eliminated without loosing any functionality. This and bumping up the title text could potentially leave room for one additional line per tile (small font).

I invite you and others to make suggestions for improvements.

I've just finished installed my system, and GUIMods is a really nice addition it - thanks for all the hard work.

@Kevin Windrem I'd really love to see the Ve.Bus status (allow to charge, allow to discharge) somewhere on one of the pages, it that currently possible?

According to the Victron documentation here:

allow to charge/discharge is only available for Lynx BMS and Lynx Ion only, so probably not for the VE.Bus BMS.

I don't have a BMS so can't test. If you run dbus-spy and go to the BMS service, and find dBus parameters that show the states then I can probably add code to support it. Another challenge will be finding space for the information.

It looks like its SystemState/DischargedDisabled and SystemState/ChargeDisabled there are no other params that look like they are relevant to the VE.Bus.

Thanks. I'll look into adding something.

Kevin Windrem commented · Aug 20, 2021 at 08:43 PM
I did some checking and there's a message that already appears of one of these variables are set. In the stock code, it's cryptic: ESS #3 for charge disabled, ESS #4 for discharge disabled. If I recall, these appear above the battery icon.

GuiMods expands these to "Charge Off" and "Disch Off", respectively. Multiple messages scroll in the message area.

What I don't know is if these work without ESS. These appear above the DC Loads tile.

Let me know if these messages occur if the BMS is in a state to disable charging or discharging. I realize this may be difficult to simulate.

adding a new page to the main screen of the GUI