Can VictronConnect run in background and keep screen active?

I use the graph data displayed in VictronConnect (connected to the BMV-712) on my phone/tablet to monitor trending data for various states of charge and draw. However, this can't be done over any reasonable period of time without the device screen timing out (or having to adjust the screen timeout on the phone/tablet) AND/OR while toggling between other apps.

2) Is there an option to keep the device screen on/active while the VictronConnect app is foregrounded (for example like google maps/streaming apps, etc do). If the screen times out, the app must reconnect to the BMV-712 which resets the graphs.

If the answer is "not possible" to both those, I'd like to file a feature request.

Adding my vote to the feature request.

I just installed my mppt and started using this app and this is something that I noticed right away, the lack of ability to record or keep the app running. +1 for feature request.

Yes, please improve the app to run in the background. And to not lose all data when switching from BMV to another device.

Same question/request. Lots of customers would appreciate this BT connexion problem being fixed.

This would be a major improvement. I see it's over a year later, so not sure if it's in the cards, but for what it's worth I'll add my vote. Also, I'd like to be able to export and store trend data.

For what it's worth, the second feature request in this thread, "...option to keep the device screen on/active while the VictronConnect app is foregrounded..." has been implemented.

Launch the app, go to Settings and you'll find a toggle for "Keep screen on"

As for the first feature request in this thread, if you read all the comments (it's a bit nested) you'll find that it sounds like they are working on some form of storing data on the BMV.

Thanks. I'm just getting familiar with this stuff. Appreciate the help!

Hi @Brian, and others, both keeping the bluetooth connection active when the app is in the background as well as blocking the phone to from going to sleep is currently not possible.

VictronConnect, as it is, is designed to be a configuration tool for professionals as well as DIYs. And for those user groups, as well as normal users, its other purpose is to login and see how everything is going; too see whats the solar yield for example. And more detailed diagnostics.

But not continuous monitoring / indeed limited features to see what has been going on.

For that we have our GX Product range and the (free of charge) VRM Portal. And for those GX products we have the low cost DYI alternative the option to use the same software that runs on our commercial offering (Venus OS) on a raspberrypi. And also there is our open source venus-docker-grafana project; which can be used to have beautiful dashboarding and graphing. See screenshots below. That is an alternative / extension to VRM.

Back to VictronConnect the good news is that we are slowly getting to a point where we can look into improving its monitoring features. There are (indeed) various ways to do that, but unfortunately its not as easy as one might hope/think. We’re working on it.

Have a good day, Matthijs 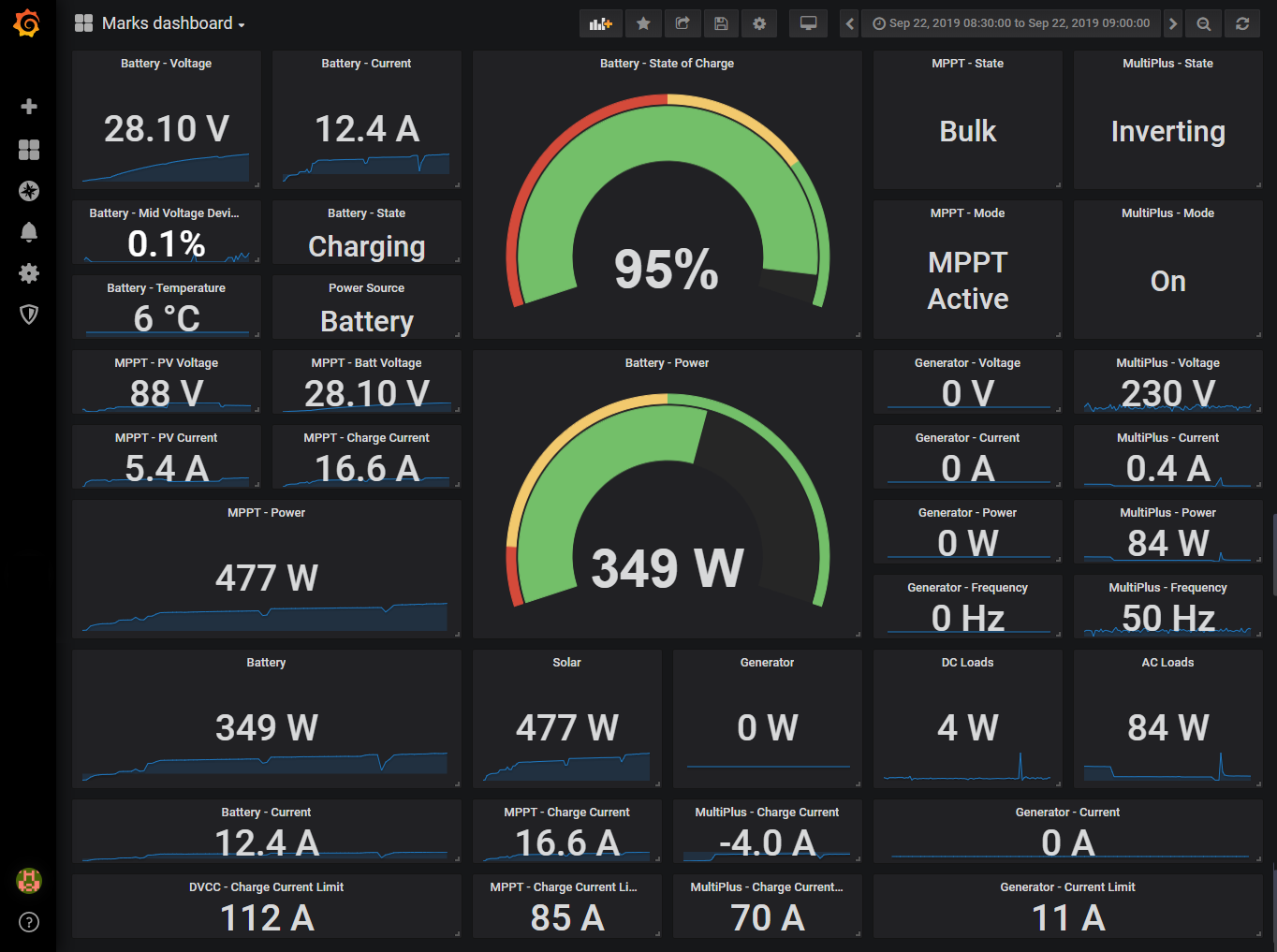 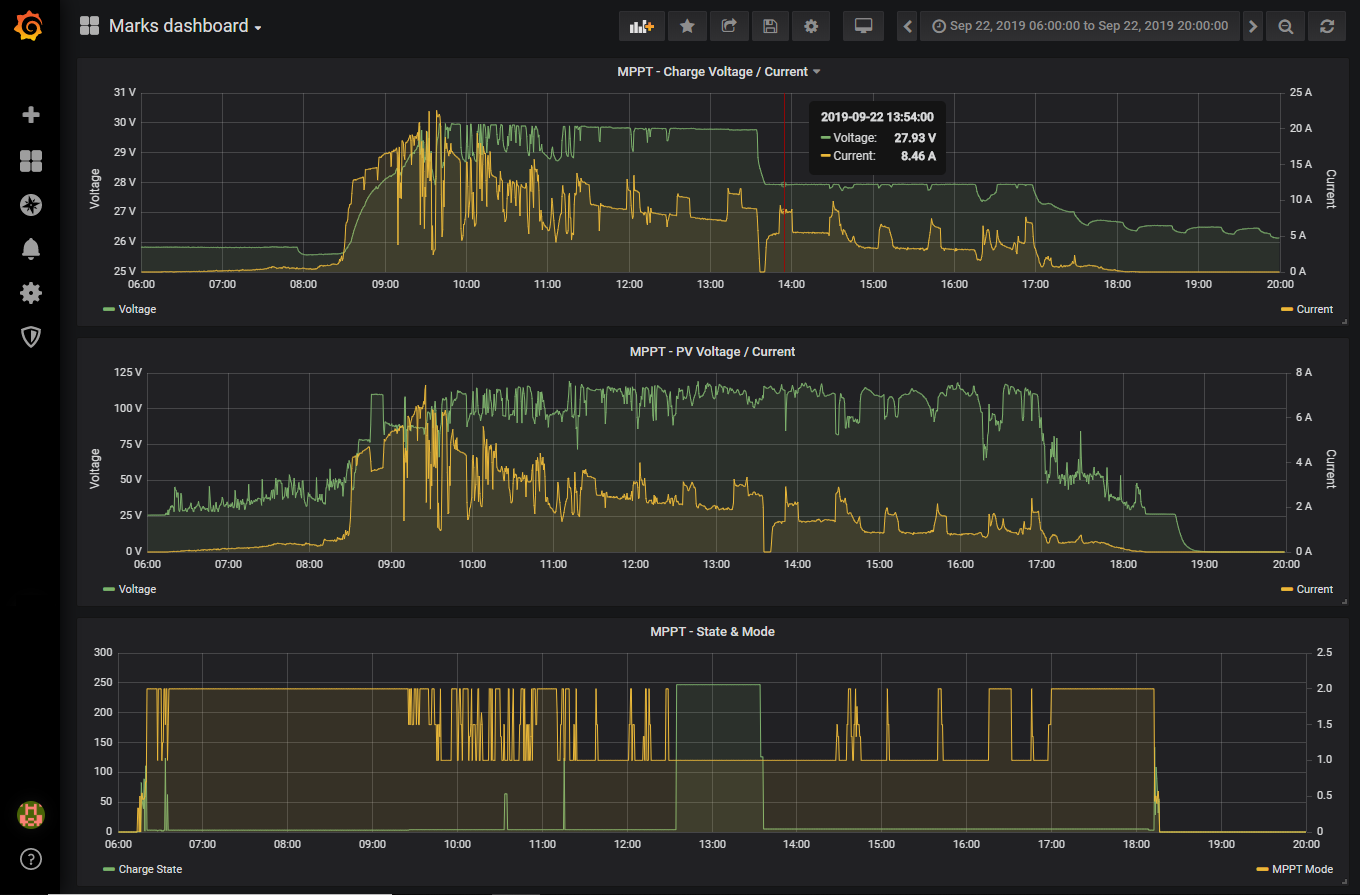 Thanks mvader, Hopefully they will come up with an easy way to keep it running. There are plenty of GPS apps that stay running in the background so hopefully it isn't too hard.

For my case, just a solar charge controller and temp sensor, a GX product would be way too much. A simple update to this app would be sufficient for my case. Other than this, I think it is a very nice app and great interface to the SCC.

There is a way to keep the screen active, while the phone is plugged in:

I would also (and many more who don't bother on the forum) highly appreciate this background run / trend memory feature.

Damn, locking features by firmware to sell other product is from an other time, and a reason too look at alternatives. Opensourcing firmwares like it happened in the RC world allowed for huge developments that corps were too greedy to do themselves.

And having trends preset configurable / loaded automatically from last time would also be great, and sincerely require about 2h of a developer's time...

Hi, thanks for you input. If it were 2hrs of work; then we would have done it a long long time ago.

What we're working on, and nearing completion, is storing the trends in the product itself. Which is even better, you don't have to keep your phone close to the product either.

Keep an eye out for the beta versions, we'll be launching this soon. And soon can mean anything - couple of weeks if all goes smooth; and months if some other hurdle or priority change happens.

Meanwhile, for anyone that needs continuous monitoring now, yes I (a) suggest buying another product, and (b) in that same post also mention that you can run our open source software totally free of charge on a RaspberryPi.

So, I don't think we fall in the category of greed you are implying, but perhaps best not to start discussing that here! I whish you a great day and be assured that just like you and many others I also wish fervently for this continuous monitoring/trending to be finished and available a s a p.

Reactivity appreciated. Thanks for the grafana alternative by the way.

You make it sound like this is a firmware upgrade to add this omitted feature?

Or is this a new product itself? That has to be purchased again?

If your actually implementing data collection it on the current 712, Kudos to the team for finally getting around to this.

Otherwise, I kinda feel like I got suckered with false advertising on this one.

for the 712, as for most other products: firmware update.

Note that it might come first for the smart battery sense; just since thats the project we're making it on now. Once thats done and well, we'll copy it over to the other products such as BMV712 and MPPTS.

And, in case any futher follow-up questions are asked here: please don't expect an answer from me anymore; this feature is coming, be assured that its quite an important one for us and being worked on very hard. And it will come when it come and more emails and talking just delays that as well as other projects within Victron.

I don't mean that unkind in anyway, just be aware that I'll stop now. have a good weekend!

@mvader (Victron Energy) I appreciate all the updates and also thank you for the info on Venus OS and the venus-docker-grafana project. I got that working on an RPI as an alternative option, but I'm looking forward to the built-in logging as well. Didn't realize this would be such a heated topic when I posted it but it's great to see that Victron values customer feedback! Cheers. Brian

Thank you for the update. Is there a forum or another place we might be able to go to for updates on this?

Another advocate for SmartShunt IOS app to run in background. Frustrated to not have a long history/trend when it fires up every time to view it, even if it was not 'shut down' on the iPhone. Just switching between my BMS app back to the SmartShunt app makes it start from scratch again.

My BMS (OverKill) IOS app keeps clicking along even thought I am in another app. Very Nice! AND the bluetooth of the OverKill is strong, Whereas the Victron bluetooth is weak.

The app is a hot mess. Why no background data collection (should be stored in the actual device until transmitted to the app) and why no single pain of glass to look at more than one BT enabled Victron product at the same time is disappointing.

Thanks, that is real constructive feedback, which will for sure motivate the developers as well as my self.

Not sure what ;o) means but I guess mvader is aiming for snarky or 'tongue in cheek'. If so I think Oilbrnr has a valid point though I'm not sure what he means by 'no single pain of glass...' ?

Someone pointed out that you can export data from an MPPT. Well yes you can but only for 'history' which effectively gives you a record of sunshine in any 24hr period which is cute but of little practical use if you want to test various alternative setups e.g. panel orientation, tracking, reflected light, etc. At the moment all you can do is to change a parameter, wait for a day and hope that you strip out other factors like weather conditions!

Do the same for 'Trends' and you have a simple and immediate tool to help installation. Now that would be something and a something that for would be very marketable angle for Victron.

The ;o) was meant to lighten the tone.

We do have very extensive monitoring solutions available, look at our GX Product range as well as the VRM Portal.

I do understand that that means installing extra components (though possible at low cost, see our free raspberrypi Venus OS image). And while nice and worth the effort and cost for larger systems; not so for many smaller systems.

So yes, I absolutely agree that it would be great if the products themselves do data collection in the background; and having all that downloadable; visible; analysable as well as exportable in VictronConnect; Its on the list of things we're making.

Hahaha @Oilbrnr if you think the app is a hot mess, you've clearly never used the old command-line programming that was the only interface just a few short years ago :-P

Bottom line, everything can always be improved upon in some way, but go try to find me a single other manufacturer of similar components that has anywhere near as polished of a device interface as Victron, let alone better...

Maybe someone will answer with a way to do this but I have occasionally wanted a similar ability and not found a way to do it. I would add my vote for the feature request.

Is Victron planning to recompile the Victron Connect App to target the new Apple M1 MacBook Air and MacBook Pro?