I've been looking through the documentation and forums for several months. From what I've read it looks like it should work but I just wanted to double check / get some assurance that I've not missed something.

I have a cheap overnight rate on Octopus Go, 7.5p/kWh as opposed to 35.05p/kWh during the daytime. We've programmed out Air Source Heat Pump to charge during the cheaper rate and during an excess solar production from the 4kw SMA Sunny Boy.

I want to be able to charge 2 sets of 48v 280Ah LifePo4 Batteries connected in parallel at the terminals only (not between each cell) and managed by a couple of Batrium Cellmate K9's to keep them balanced. 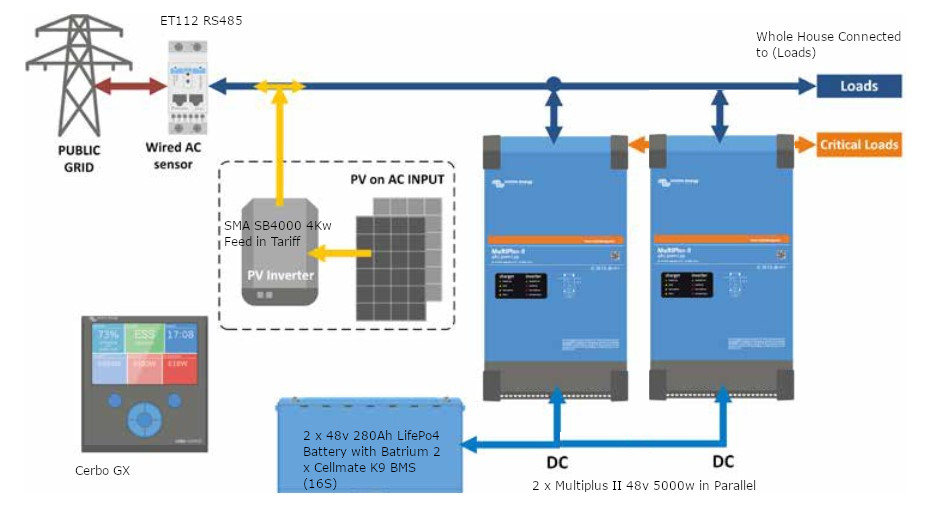 Will the above setup in ESS mode, allow all the loads in the house to be powered by the Multiplus's and Sunnyboy whilst not exporting anything to the grid, and then charge the batteries back to 90% on the cheap rate electricity ?

or would I be better of with a Quattro 10kw which can charge at 140A native ?

Yes, it will do that. Also it will charge the battery during the day with excess PV power.
If the battery is full and there is still excess PV power then it will be exported.
The trick is to figure out if you will actually need to charge between 0030 and 0430 because there might be enough energy in the battery to see you through to the next day and the next day might have sunny weather. Accurate next day's weather information is extremely difficult to come by.

Thanks for the reply, is that the same for the Multiplus II and the Quattro ?

Re the weather - i've been building a house for the past few years, the forecast got me wet many many times. We have polytunnels 200mtrs away, they can signal rain upto 5 minutes in advance.

75 People are following this question.

Stuck on Float Voltage in ESS