I have Venus running great on my Raspberry Pi 3. I have 3 x MPPT connected via USB Ve.Direct to the Pi as well as a Multiplus and SmartShunt. They charge a bank of lead acid batts.

After enabling DVCC on the Venus, is there a way to verify its working as expected? The reason I ask is when I go to Network Status on the MPPTs, it states:

This status doesn’t seem to indicate that DVCC is working as you’d expect the device to think it was networked.

The alternative is I use VE Smart Network which I have used with success previously but don’t see why DVCC isn’t working.

IIRC, when I had only DVCC and not ESS enabled, there was no indication the MPPT were under external control or networked in anyway.

Use DVCC to set a low charge current limit. If they observe that limit, you know it's working.

The MPPT's only run networked via V.E Can I believe.

Setting, System Setup, System Status is where you can see DVCC status 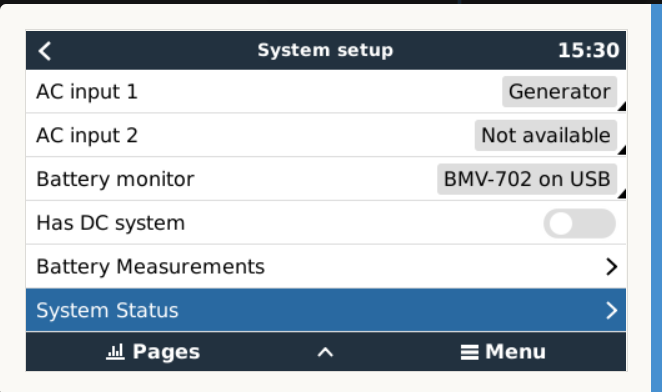 60 People are following this question.

Instance ID of devices on VenusOS still changing with 2.65~5