Compared to the previous public test version, v2.90~10, this has various fixes for issues introduced earlier in v2.90 as well as some additions.

Plan for v2.90 is still the same: there will be a few more betas, and testing time ofcourse, before this is released. But no other large changes; to try and keep the timeline to official release reasonable.

All the best and have a good evening,

Various fixes of regressions made earlier in v2.90:

Less relevant for most users: 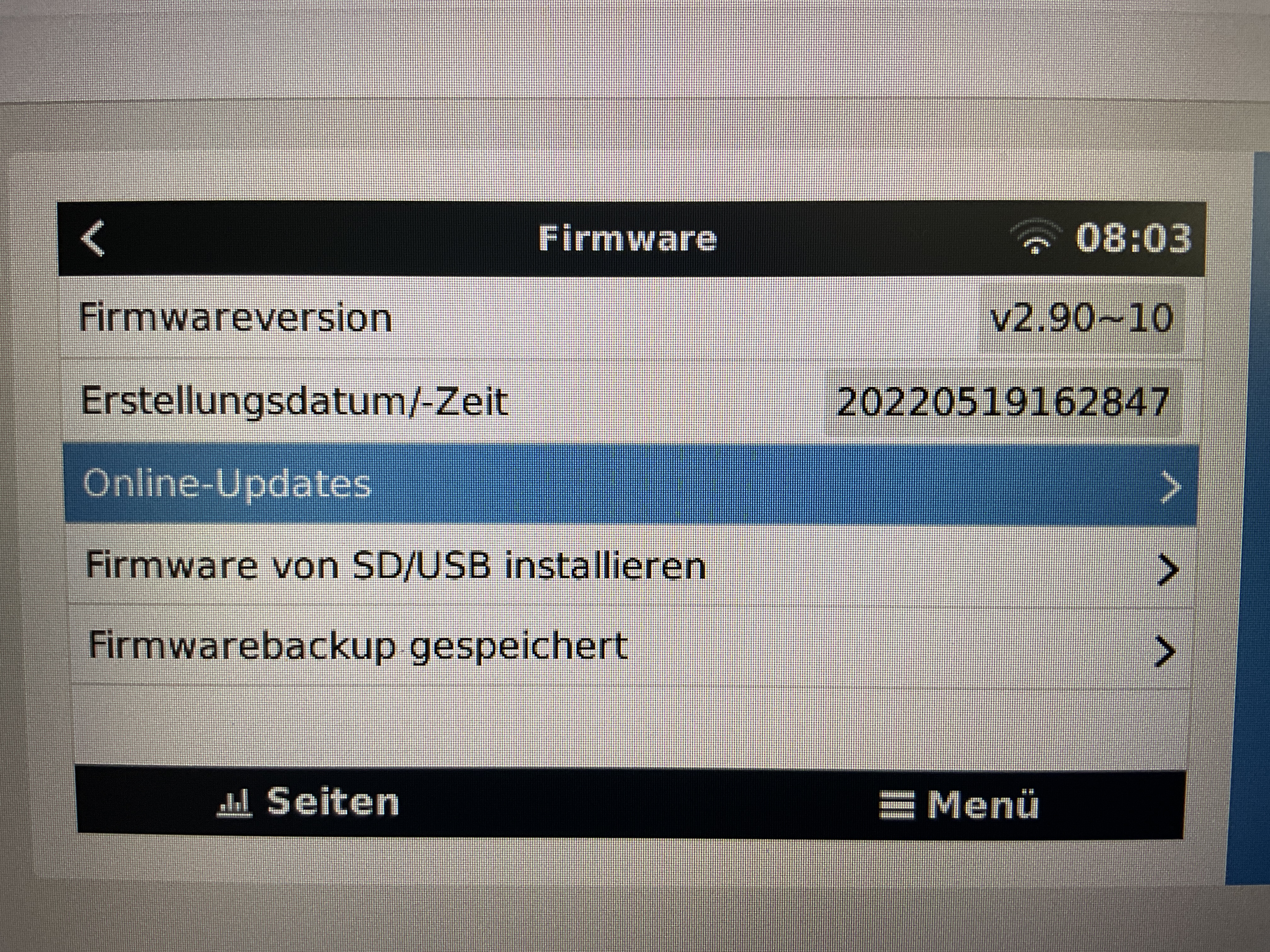 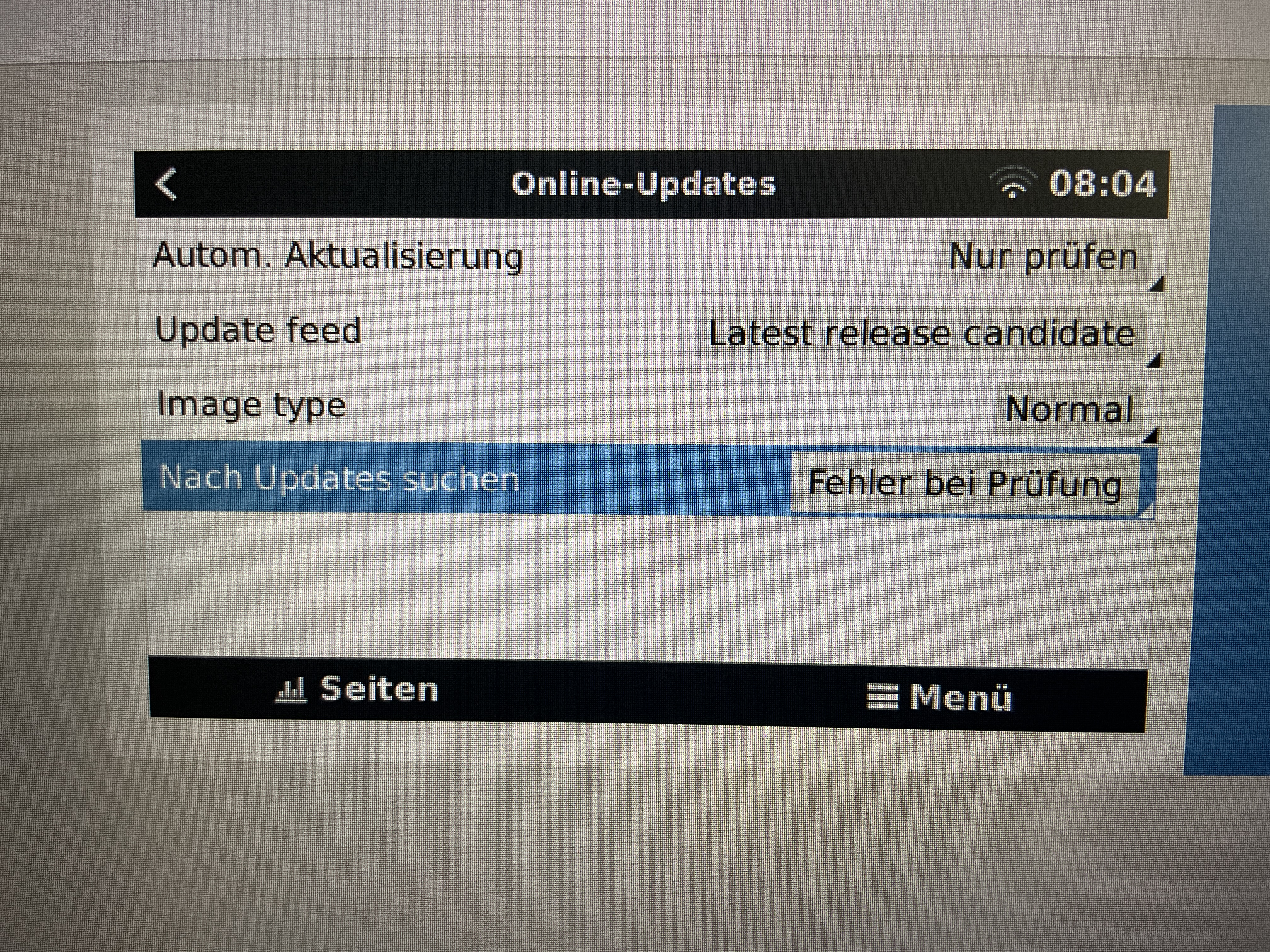 You missed this part from the changelog: "NOTE: Reflashing the SD-Card is required" and "This change has been done such that Pis already running will not auto-update themselves to v2.90~12 or later".

I'm running 2.90~3 Large on a rpi3B+, reading your post, thought that I might as well, check what I can update to without having to reflash.

Well, seems it applies to all rpis not only 4s as it comes with error during checking.

Q: is this something we will have to endure often?

Q2: is there a way to upgrade online to a version which is not the latest?

bathnm vassilis-bourdakis · Jun 09 at 09:21 PM
Hi @Vassilis Bourdakis I can comment on your first question, but not your second.

Is this something that will happen often, the answer is no. In this case the kernel upgrade has triggered a need to udpate files on the boot partition. This means that the root and boot partitions would become incompatible with each other, and thus the boot partitions needed updating and a complete re-image. The risk of automating an upgrade of the boot partition is that the entire machine becomes non bootable and a re-image would be required anyway,

vassilis-bourdakis bathnm · Jun 10 at 05:29 AM
thanks a lot for the explanation. Up till recently due to using the Large version on a rpi I had to do full installs all the time so missed the change kernel and boot related issues.

Hi @Vassilis Bourdakis , The answer to the other question "Q2: is there a way to upgrade online to a version which is not the latest?", is no, not possible.

That for the Pis its necessary to do a reflash now and then is just a fact; its not something we can fix in any reasonable amount of time/risk.

no worries, happy to have all that in the first place.

Will do a reinstall to the latest ver sometime at the end of the month before I start using the boat!

Is this a new function? Where is it hidden?

The new battery support doesn't actually appear in the main list yet so can only be accessed with the link above.

Thanks for having fixed the limit feed-in switch! It works again as expected.

@mvader (Victron Energy): Apropos "Stop on SOC": I am desparately looking forward getting a function that limits the battery charging on a top level, but not when charging from grid, but especially from PV.
You certainly know that regular charging of LiFePo batteries to 100% reduces theír lifetime by more than 30%. In case anyone has a properly dimensioned battery, that battery maintenance would make sense especially during summer times to charge the battery e.g. only once per week to 100%.

Charging Lithium-ion to 100% effects their lifespan but it was my understanding that it doesn't affect LiFePO4 the same way.

The cycle life of LiFePO4 is so high that the cells will likely die of age before the cycle count is reached.

Is this anecdotal or is there actual data to support this, in a consumer ESS environment?

What works for EV's does not apply for home use, they have fundamentally different charge/discharge profiles.

Please download and read this article about LiFePo batteries from Journal of The Electrochemical Society. It's nothing anecdotal. It's more about lack of knowledge ;-) 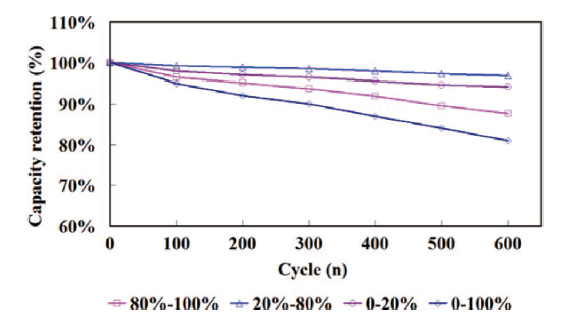 Beside that you might be able to find plenty more using Dr. google.

nickdb ♦ thomasw-1 · Jun 10 at 10:09 AM
The problem with this is that it is mostly irrelevant for home use, it references EV type use cases which are different - they have much higher charge/discharge rates.

They also run cells to much higher voltages than consumer batteries which are designed for long life.

This is a myth that is leaking over into residential ESS use from EV's c/o the internet.

At the rate a home user will charge/discharge their battery, combined with the typical cell voltage in use, there is zero value to partially charging a home lifepo4 battery.

If anything you will shorten its life by preventing proper cell balancing.

You are trying to solve a problem you don't have.

As already indicated, the batteries are more likely to die of old age than cycling.

You arguments base on wrong assumptions:

It's with you believing in myths, at least I don't. I trust hard facts. 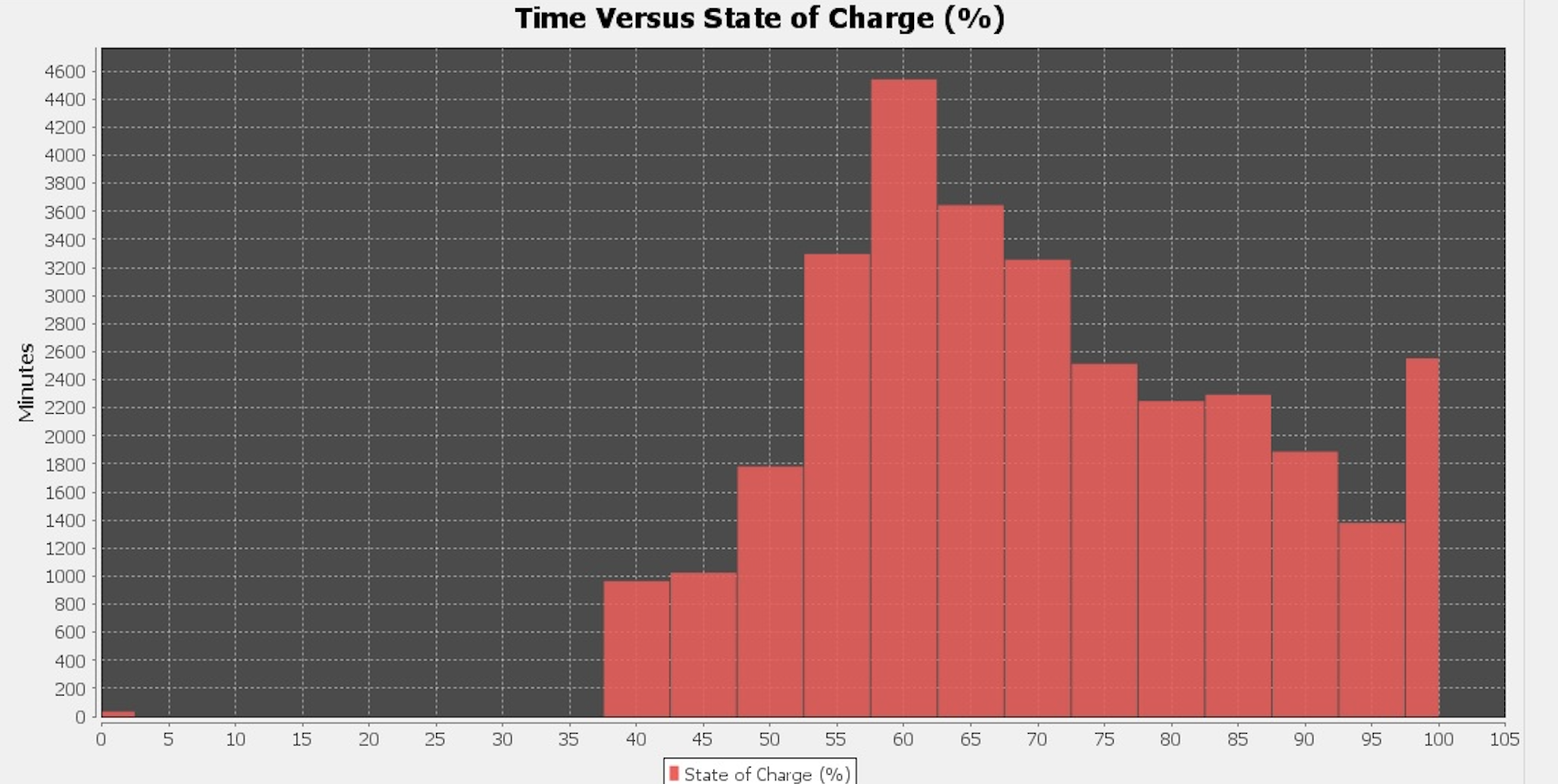 Here's a typical histogram of the time an ESS battery spends in different states. It is not the same as an EV, you aren't going to fast charge it and if the system is sized correctly you will never push the system as hard as an EV, or EV charger, might.

This example has a minimum cutoff, most others run lower and have a better distribution.

The battery will inherently spend it's life in a state that renders lower limits pointless (and this is in a region where there is no shortage of sunlight).

Also, all BMS don't work the same, some need a minimum threshold to balance properly.

@nickdb, your argumentation bases on hypothesis. Please list a single academic analysis for your assumption!

Another generic, non EV-specific study published in March this year concludes analogue to the first one with "decreasing median cycle SoC to minimize battery degradation from cycling"! &
"In the scenarios considered, the charging time gradually increased from four to seven hours, while the average SoC de-creased by 20%. Such an adaptable scheduling results in reduced battery degradation and a longer lifetime, which may provide as much as 12.1% of savings in the battery storage system project."

This is why I want to reduce and/or limit the charging. This could be implemented by a native VenusOS functionality, but also by external control. For second option however, the DVCC charge limit would have to work like documented in ESS manual (which currently it unfortunately doesn't).

will there be BT support for the mopatek pro LPG sensor in v2.90?

in v2.87 the Ruuvi sensors no longer work for me. they are not recognized. will this work again in v2.90?

mvader (Victron Energy) ♦♦ · Jun 13 at 11:12 AM
Ruuvi sensors no longer working: please share more details. They should work in v2.90; they do in all systems that we test as well as monitor remotely.

Mopeka: I don't know yet when that will be included.

I made a downgrade to the latest Release 2.87, bluetooth came up again, but without the Ruuvis.

I also will be happy with Mopeka integration. ;-)

thanks for your report.

And in case you can reproduce, please provide a photo/screenshot of the Settings -> Sensors -> Bluetooth -> Bluetooth adapters menu. Like this one: 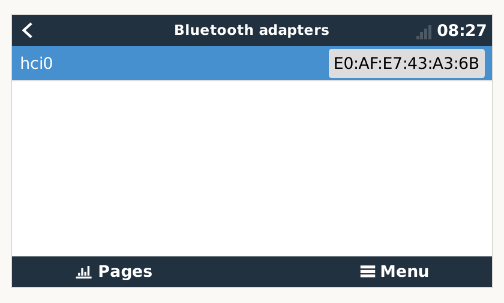 We haven't been able to reproduce any problems, hence the questions.

no, i use the internal bluetooth modul because of to few usb-ports.

I'll test it again, maybe saturday. If there will be the same results, i'll make some screenshots.

Being testing the raspi B4+ version 1.4 2GB all OK to date. touch screen, boot etc.

Just had to add in Kevin Windrem setup helper and Gui mods to boot the screen up etc, Relays all there etc.

The only thing missing is the analog ports under IO to sort out ?

The /sys/bus/iio/devices folder is missing?

On the raspi3B+ analog IO is OK.

bathnm · Jun 13 at 11:13 AM
You must be loading some overlay file in the boot process. I have a fresh RPI3B on 2.90~12 and do not have that directory. It is populated based on drivers that are loaded. Maybe take a look at the RPI3b file /u-boot/ config.txt and post the details here,.
0 Likes 0 ·

mvader (Victron Energy) ♦♦ · Jun 13 at 11:23 AM
Hi Rob, I also saw a comment somewhere in github from you, which I removed. Please leave your comments in one place and not in many.

i tried today image 2.90-12 for RaspberryPi Zero2w, but doesn't work with image for pi2 or pi4 at first.

okay, i found the missuing points for zero2w in image pi 2, then it is booting:

- in /boot/config.txt we need additional lines

btw: the thread "Victron OS on new Raspberry Pi Zero 2 W" which had a possible working image is away:

bathnm · Jun 15 at 08:32 AM
@hardy tuner Your re correct that the images currently available do not boot a Pi Zero2W correctly. You have identified correctly that the PI2 image is the one to use, but that there are some things missing, more than just the lines you identified.

Further testing has happened and there is a defined build that'd does work, including the changes you identified as well as changes to the WIFI firmeware and a few other internal changes due to no ethernet being available.

I can not confirm when the new beta image supporting the Pi Zero2W will be available, but based on the fact the link you have referenced has been removed and the RPI supported models have been updated it should be soon.

Any ideas when selecting a phase for a single meter will be available? For meters like the EM/ET112 and such...

This works again, haven't had to use it due to the good weather and such though :).

For now (compared to the released .87 version) somehow my SMA inverter stays connected better. Can't tell if it's the SMA inverter playing up or Venus OS. Eitherway, haven't had to reset the TCP/UDP server on the inverter since the .90 install.

They found some security issues in u-boot, maybe thats important and not fixed when using u-boot goes to v2022-01.

On my Cerbo running 2.90-12, I experience the "DC system" wattage is doubled from actual value in the display. The charge comes from two WS500 regulators. 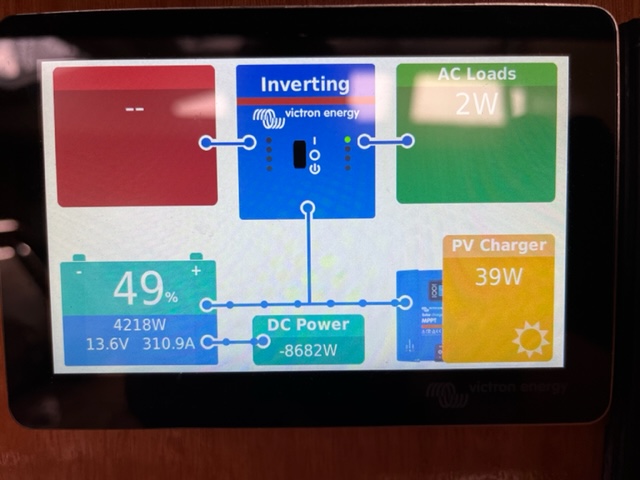 bathnm · Jun 16 at 08:10 PM
@Sturla Glad to see it is working. Could you please post a screen shot of the device list showing the two alternators. and another of the device screen themselves. Many Thanks.
0 Likes 0 ·

Only have this view available; 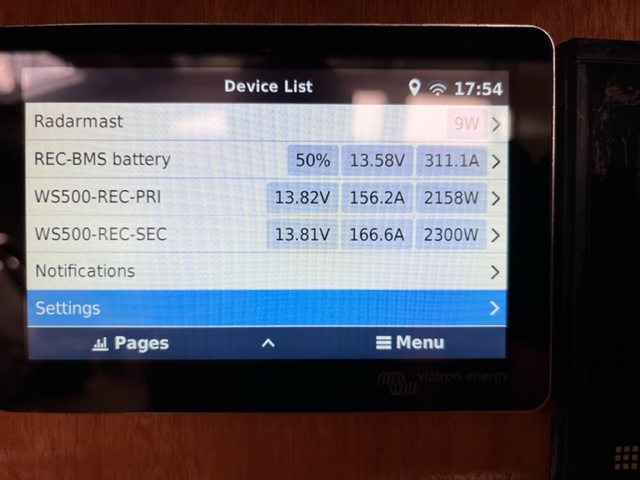 Here the regulators are running the 2.5.0 beta version. In the device view, all relevant data appears. (The rpm data is not correct).

As the 2.5.0 beta caused fluctuating charging, I downgraded back to 2.4.3, which are much more stable from a charging perspective. With this version, there are less info available in the device view (like field %).

bathnm sturla · Jun 17 at 09:25 AM
Your RPM data may not be correct due to configuration of the pulley ratio in the $SCT configuration option. The RPM is either taken off the CAN or calculation based on the alternator stator input and fully ratio between alternator and crank.

Regarding the DC Load, noted the problem and will take a look.

There is a fix already in play and will be in one of the upcoming beta's. It did not make 2.90~14

Seems like WS500 communication only works when using 250kbps, not with 500 kbps?

We have an different system setup with all 250kbps and this works fine.

@Offpist That is correct. The 500Kb port is a BMS Can port and will not understand the messages the WS is sending out. For those use case where battery is connect to the 500Kb BMS Can port a later release of likely WS firmeware will be needed. The WS500 can then be installed on the 250Kb VE.Can port and receive charging direction from the VenusOS, much as can connected MPPTs do.

I cannot see the link to download - does anyone know where ? 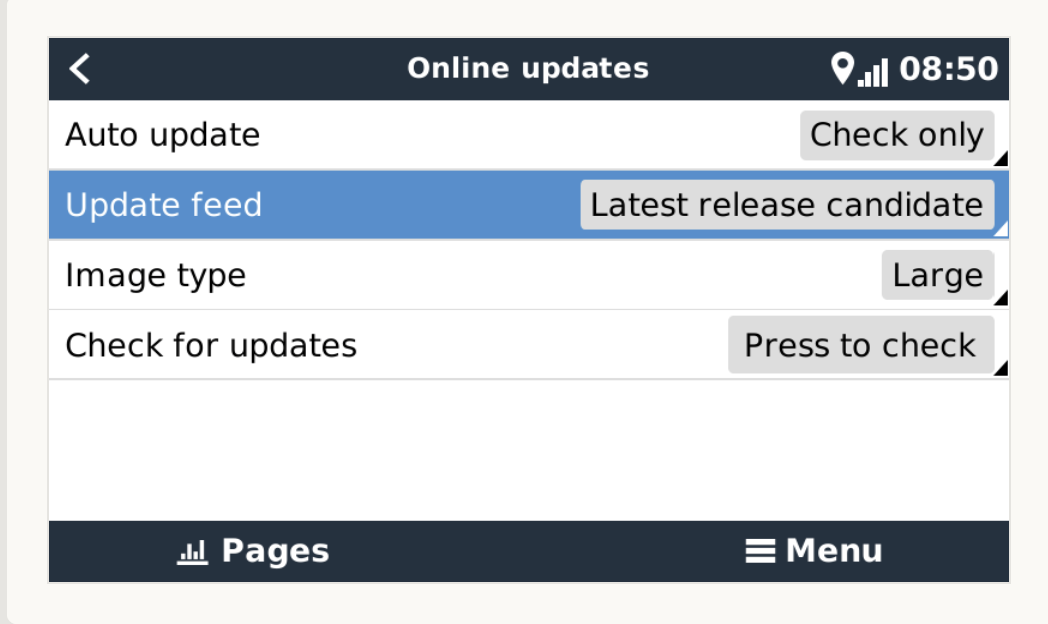 Just reporting : with 2.90 ~12 for me Raspberry Pi Zero 2W does boot and it works fine but not stable: crashes after few hours or did not start MPPT to work.

57 People are following this question.