v2.30~40 is now available for testing. Please post feedback below this item in the Answers section.

As explained last time, the main new feature in v2.30 is the integration with MFDs as used on the helm of a yacht. And that feature is ready for testing. To do so, enable MQTT in Settings -> Services, and then open a webbrowser and navigate to http://[ipaddress]/app. In some cases http://venus.local/ will work as well. Also it can already be tested on compatible Navico and Garmin displays. Preliminary documentation is available here:

Do not contact any support channels when having issues when running a beta firmware version. Instead; report on community via the link on the top of this email, or contact me directly.

Thank you for your testing efforts again! And have a good night, or day,

* Add Settings -> System Setup -> Battery measurements page. This is where you can configure the `Batteries` page in the MFD Integration app. Also known by some as the HTML5 feature. See this video: https://www.dropbox.com/s/nlvqttx320zyaba/Battery%20Measurements.mov?dl=0

* Add Battery temperature measured by Multis and Quattros: its shown in the menus; it can be selected to use it for Shared Temperature Sense; its logged to the VRM Portal; and its available on ModbusTCP.

* Add network watchdog: automatically reboot the Venus-device in case it has not been able to sent data to VRM for a while. See Settings -> VRM online portal -> Reboot device when no contact.

* Fix Remote VEConfigure being slow; this issue was introduced earlier in v2.30 development.

* Rename the "ESS" state to "External control" for solar chargers. This fixes the confusion around off-grid systems where no ESS was running; but still were reporting it. Thank you JohnC, Guy and others for reporting this.

* GX GSM: Enable the GPS also when there is no simcard inserted. Thank you Jondal for raising this.

* Generator start/stop: hide the battery monitor selection. It now always uses the same battery monitor as is used by the rest of the system. Except systems that already had a different battery monitor configured: their behaviour will not change by installing this update.

* Generator start/stop: log the condition that is causing the generator to be running to VRM so its possible to analyse why the generator was started. For now only visible on the XLS and CSV download buttons on VRM.

* Various fixes and improvements for the CANvu GX; there are no pending todos or open issues any more.

* Fix various touch & other issues in the gui

* Firmware updates: allow downgrading; this fixes the problem that it wasn't possible to go from a candidate version, v2.20~something for example, to the latest official version, v2.18 for

* Fix Phoenix VE.Bus Inverters being called MultiPlus. They are now properly recognised as an Inverter.

* Make multiple BMSes in the same system work well by making the BMS selection deterministic: it will use the BMS with the lowest configured BMS instance for DVCC. Any others are just shown in the menus. This allows, for example, to add a second Lynx Ion BMS with battery pack used for (only) a large electric bow-thruster; besides another pack thats used as the boats main service battery.

* Improve the Shared Temperature Sensor function: Multi/Quattro inverter/chargers, Venus GX temperature accessory and the VE.Can Solar Chargers were added as possible inputs to measure -and share- battery temperature. Before this change it only accepted BMV and Lynx Shunt battery monitors.

* Fix ESS operation in systems with more than one VE.Bus system connected (second is then connected using a MK3-USB): ESS will always use the main VE.Bus system, selected by sorting on instance number.

* Fix the CPU load. Thank you Torsten for raising this, its back at its normal level again.

* Add registers for manual start, runtime, and RunByConditionCode which shows why the generator is running.

Developers & under the hood:

* fix some bugs in vebus-updater

* VE.Direct: Add check that bidirectional communication is possible (except for BMV60x). In the support desk we have seen multipe self-made USB-VE.Direct cables now; of which only the RX signal works; rather than RX and TX. And that works somewhat; but not 100%; and nobody understands why. So; now the code tests if its a properly working cable; and if not; hides the connected device completely.

* Tested to work on iOS and macOS: a Venus device can now be found on those clients by typing http://venus.local in a webbrowser.

* Tested to work on Windows: a Venus device can now be found on those clients by typing http://venus.local in a webbrowser.

* But does not work on Android, since it does not seem to support any zeroconf style name resolution mechanism: https://bugs.chromium.org/p/chromium/issues/detail?id=405925&desc=2

* Fix setting the date & time not working properly for off-grid systems: changes to the date and time were only stored to the device when being rebooted from within the menus (which nobody ever does). Power cycling a unit would make it jump back to the previous date & time. This is now fixed. Note that only installations without internet were affected: with internet, the date and time are set automatically; as well as stored properly. This bug has always been in the system, since the first release.

* ESS with DVCC enabled: Fix solar voltage offset not going into DVCC mode. Thank you Simon H. for finding and reporting this.

* Fix internet connection issues for a small number of systems; by lowering the MTU to 1450. If affected you typically see that logging data to VRM works, but Remote Console does not work; and Remote VEConfigure and Remote Firmware Update work partially: scanning typically works; but anything using full packet sizes; such as uploading a firmware file; or transferring the VEConfigure file; does not work and returns error 1300. More information here: https://community.victronenergy.com/questions/3608/how-to-solve-error-1300-on-remote-ve-configure.html.

* Change the "Solar Charger" -> "BMS Controlled switch" into a reset button: the feature is auto-enabled. Therefor, having an on/off switch was confusing. Now

* Fix that data was not sent to VRM in some rare occasions. Only seen on Warwick his beaglebone and new Venus devices not released yet (random entropy & python ssl patch).

* Enable tun/tap for all kernels

* Re-enable rfkill for the CCGX kernel; its went missing in the change from 3.7 to 4.19

* Add the first version of the Marine MFD aka Chart-plotter integration. Tested with the Navico brands; Garmin and Raymarine. See blogposts for more information. Note that this is not officially supported yet; we're still making lots of changes, and it doesn't work on a Raymarine display unless that is running a development firmware verions, and this is also pending official approval from the mentioned MFD manufacturers. More information here:

* Add multiple demos; One ESS demo, and two Marine/Motorhome oriented demos are available to choose from.

* Add a low-cell voltage warning and alarm for Lynx Ion BMS systems. Not that this only works for the Lynx Ion BMS. It does not work for the (discontinued) Lynx Ion + Shunt models. It will first issue a warning; and that will change to an alarm once the voltage is so low that the system has disabled the 'allow-to-discharge' signal; which shuts down any connected inverters and other loads.

* Carlo Gavazzi Energy Meter power or current overload now results in no data being stored; this used to be a very high value; distorting the graphs on VRM. Thank you Tilo Ritz for reporting.

* Fix mouse/touch getting stuck when touching cancel while the options menu is closing.

* Various small improvements; mostly to make it work better when using it on a touch device; such as the CANvu GX and as Remote Console is typically used.

* Fix duplicated vebus warning and alarms in the menu and notifications (bug was introduced in v2.18)

* Allow for types with dashes in the serial-numbers, such as ABB PV Inverters.

* Enable power limiting for ABB PV-inverters: same as Fronius Zero Feed-in; use the Fronius switch to enable it. Note that this is an opportunistic trial: it might work; might not; And if hard to fix we might consider not to fix it in case it doesn't work.

* When Active AC input is a generator, enable the Fronius zero-feedin limiter. Thanks to Simon Hackett for reporting.

* Improve flexibility of the multiplier setting for the pulse counter; the spinbox has been replaced with a normal edit box where a number can be entered now; with up to 6 decimal places.

* Add a link local interface parallel to the ethernet: this make the link local address directly available instead of only after a DHCP timeout. See https://github.com/victronenergy/venus/issues/361

* Raspberrypi 3B+: fix the wifi. Thanks to Per and others for helping us out.

* Update vbdup, the commandline tool to update a VE.Bus device, to version 1.00; lots of improvements, including -I think- that it can now also be used to update a MultiPlus-II and MultiGrid.

* rtl8723bu wifi driver: update to latest version to fix building for Linux 4.19. This driver is used in the Venus GX.

Note that to unsubscribe, hitting the unsubscribe link below does not work. Instead, change your system to work on Official-releases. Instead of working on test versions. Which by the way is never advised for customer installations. More information here:

In v2.30, is it/will it be possible for the user/installer to manually & individually select the source for both voltage & temperature to use for SVS & STS?

(rather than only automatic)

This issue/question has come up in the post linked below;

As my Venus GX has just updated to rev 40 by AUTO UPDATE it has also frozen on the last screen it was on so I am presuming this occured due to the autoupdate.

Hi @Paul B, thats strange. Is it ok if a colleague or I login to the unit to see if we can find something?

Also re the Generator Auto Start and Periodic Run option

the Periodic run will also still occur EVEN if Do not run generator when AC1 is in Use has been selected.

Now I can understand that this maybe also be needed and is valid, but it may also NOT be needed by some customers. maybe add that option into the Periodic menu so it can be selected IF needed. 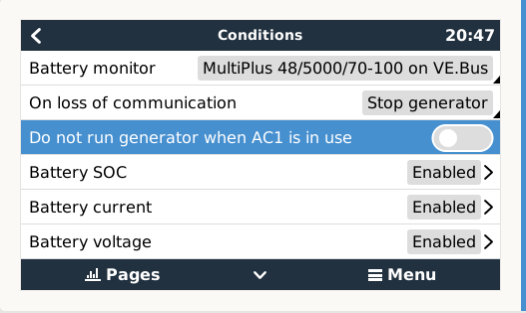 I'm thinking we have shared temp sense now with the multiplus? 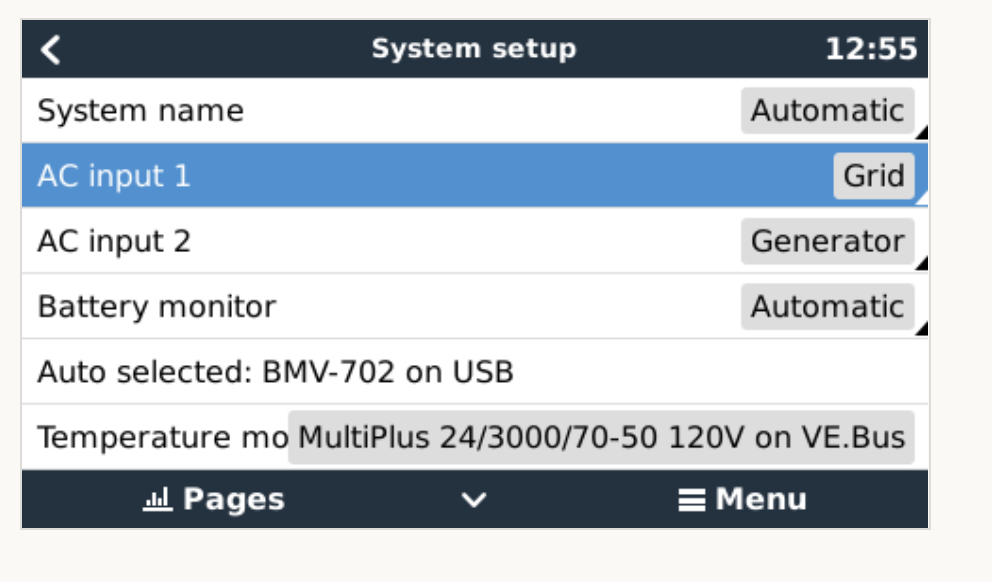 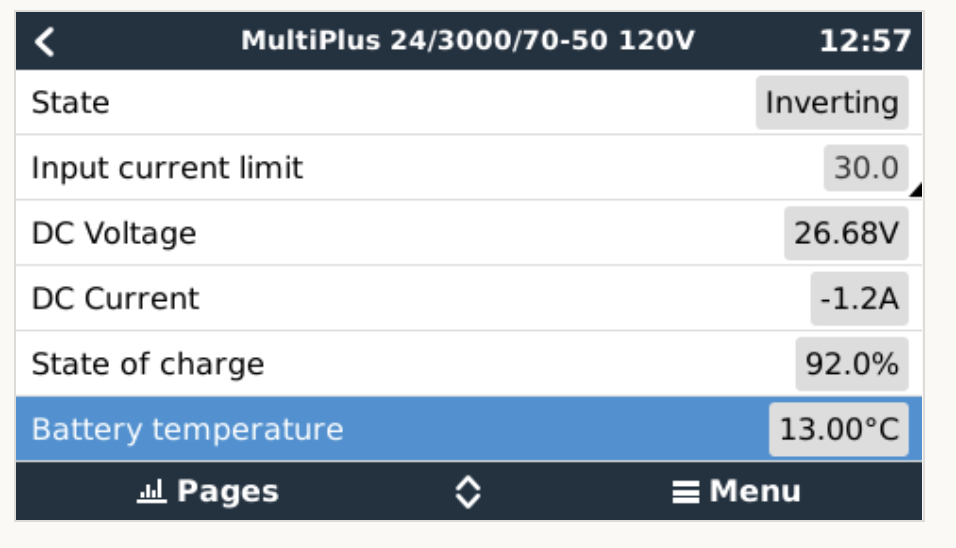 Seems stable so far. The new feature in DVCC, shared temperature compensation by Multiplus, seems to be working nicely. I could not fully test until there is some noticeable temperature variation on my battery, which is pretty stable. But there is a difference with or without DVCC + STS.

What I cannot understand is what is happening with DVCC + SVS. Either shared voltage sensing is not working, or I am using it wrong, or there is some malfunction in my set.

More details about this issue on this topic:

What really puzzles me is that it seems the system is getting the SVS value from the MPPT which is not a VE.Bus device! That is really unexpected... 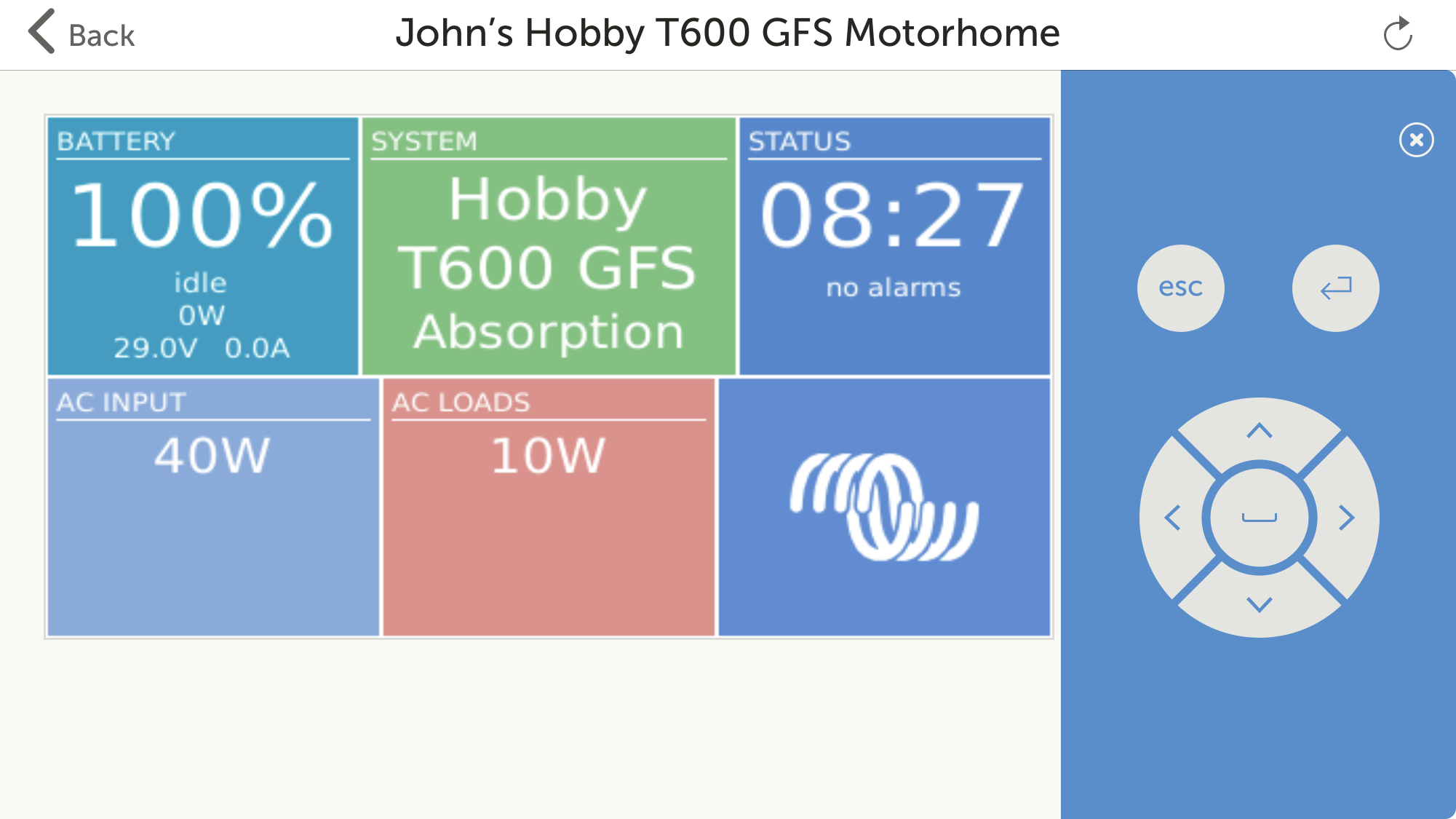 Something I assume you know but just in case. DVCC enabled, Lynx Ion BMS with latest firmware and HE battery. When fully charged and no charging taking place, still shows as in ‘Absorption’ per screenshot.

i don't seem to be able to change the device used as the temperature monitor independently of the battery monitor.

I'd like to use the BMV as the battery monitor, and the multiplus as the temperature sensor, so that I can re-enable midpoint monitoring on the BMV.....

While I agree that ideally the user should be able to manually select the temperature source to use for STS, I currently have your desired configuration running with the current auto STS selection.

Just go into the BMV settings (via Victron Connect) and change the Aux input to mid point monitor.

Then it should automatically switch over, if not try a 'system redetect' or 'reboot'.

yes that worked, thanks :)