I would like to set up a MultiPlus 2 GX device as an ESS at home to optimise self-consumption. This will require a meter at my grid input.

I want to re-use my existing Aeotec ZWave meter that is input into Home Assistant so that I don't require any additional hardware at my already-cramped meter/consumer unit. However I see from the MultiPlus manual that currently only the ET series of meters are supported. This will also add ~£400 to my cost so I want to avoid that.

Reading through the mode-2 and mode-3 info here: ESS mode 2 and 3 , I can see there is a lot of scope for customers implementing their own control loops. I'd just have to continually update the 'Grid Power Setpoint' parameter via Modbus-TCP or MQTT, using either Home Assistant or some other adapter.

However, I'd like to let the MultiPlus perform the control loop itself via Mode 1 or 2, but input the meter data myself, ideally via TCP.

Does anyone know of a way to do this?

Ideally I could just publish the current grid import/export power in Watts via MQTT, DBus, or Modbus-TCP. Either to the GX device or directly to the MutiPlus device.

But if that isn't going to be possible, I'm thinking something like simulating an ET-112 meter by adapting my existing meter data into the correct Modbus format, and sending that in via TCP. If that's not possible I will adapt it into RS485, then the MultiPlus wouldn't be able to tell the difference between my adapter and the 'real' ET-112 connected via RS485.

One problem with this approach is I don't know precisely which values are queried by the MultiPlus, and at what sample rates. I don't want to purchase the ET-112 to reverse engineer the exact exchanges between it and my MultiPlus.

Anyone done anything like this? Does my approach sound ok, or is there a better one?

This seems to indicate it is possible to bridge the Carlo Gavazzi sensors over ModbusTCP, so my "faking it" approach should theoretically work...but might be a pain to implement all the message exchanges/registers that the GX device makes use of.

A nicer solution would be to write in the grid meter data in a meter-agnostic format (i.e. so the MultiPlus/GX thinks its talking to a generic meter rather than a specific EM/ET-series one)

My attempt at playing with Python Modbus & MQTT

same reason no more space I use the current sensor and have it extended by 3 meter high quality earphone cable extension. If you use it dont forget to tick external sensor in ve config. I use Openhab and modbus but do grid set manually on the fly but this can easily be automated by complex rules etc..

I also use Iammeter as digital meter @ 150€ but it only updates every 30 seconds but the supporting cloud produces nice graphs....

Thanks, although that would be nice and simple + cheap, I don't think that will suit me either though (unless I absolutely have to)...

It's physical, aesthetic, and financial constraints driving this really.

The MultiPlus will be located in a shed 15 metres away, but with no good cable runs to get out to the shed - the CU is in the middle of my house, can't run any new cables under tiled floor to outside - would have to go up and across, which is a big pain. I don't want to risk doing all that then finding that the CT clamp signal is too degraded to use.

To expand further why I don't want an ET-112 or similar DIN-mounted meter...

The cupboard I have my Consumer Unit etc inside has almost no free space. There are no DIN slots left in my 16-module consumer unit for the ET-112, and a larger one would need me to build a whole new wider cupboard for it to go in. Also, my wife doesn't like that idea as it would chop off her shoe storage! That would lose me a lot of credit for messing around with solar stuff :)

So the wireless CT clamp I already own is perfect for my situation - if Victron offered one of these (at reasonable price) I'd almost definitely go for it. I just have to figure out how to adapt it...

You can get the ZigBee to RS485 converters for about £30 each from China if you ever did go that route btw. Looks like you're making good headway though.

Just a quick update on my project...

My MultiPlus arrived in the post yesterday and I hurriedly installed it. After the physical installation was done I began work on setting up the control loop part of the ESS.

I ultimately decided not to go the route I suggested in my earlier post (Mode 1+ custom meter input), after discovery how easy Mode 3 was.

I now have Home Assistant running my control loop with a small set of Automations, the most complicated of which is basically a 5-line 'if' statement with some exponential moving average filtering (aka low pass).

I've made it so I can move a slider in HomeAssistant for "maximum watts to take from the battey" (aka AC Setpoint), and an overall binary toggle switch to enable/disable battery discharge at all. In future I will schedule this appropriately.

Anyone implementing Mode 3 needs to be aware of two important discoveries I've made (please correct me if I'm wrong here):

Lots more to improve in my control loop in future, but what I have now is better than I thought I'd have after less than a day of work. 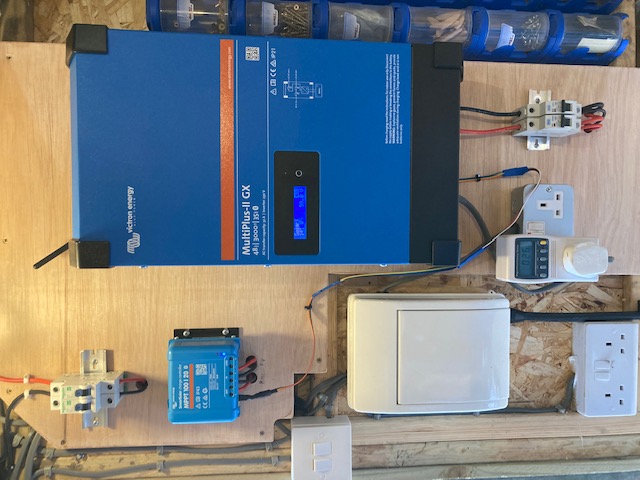 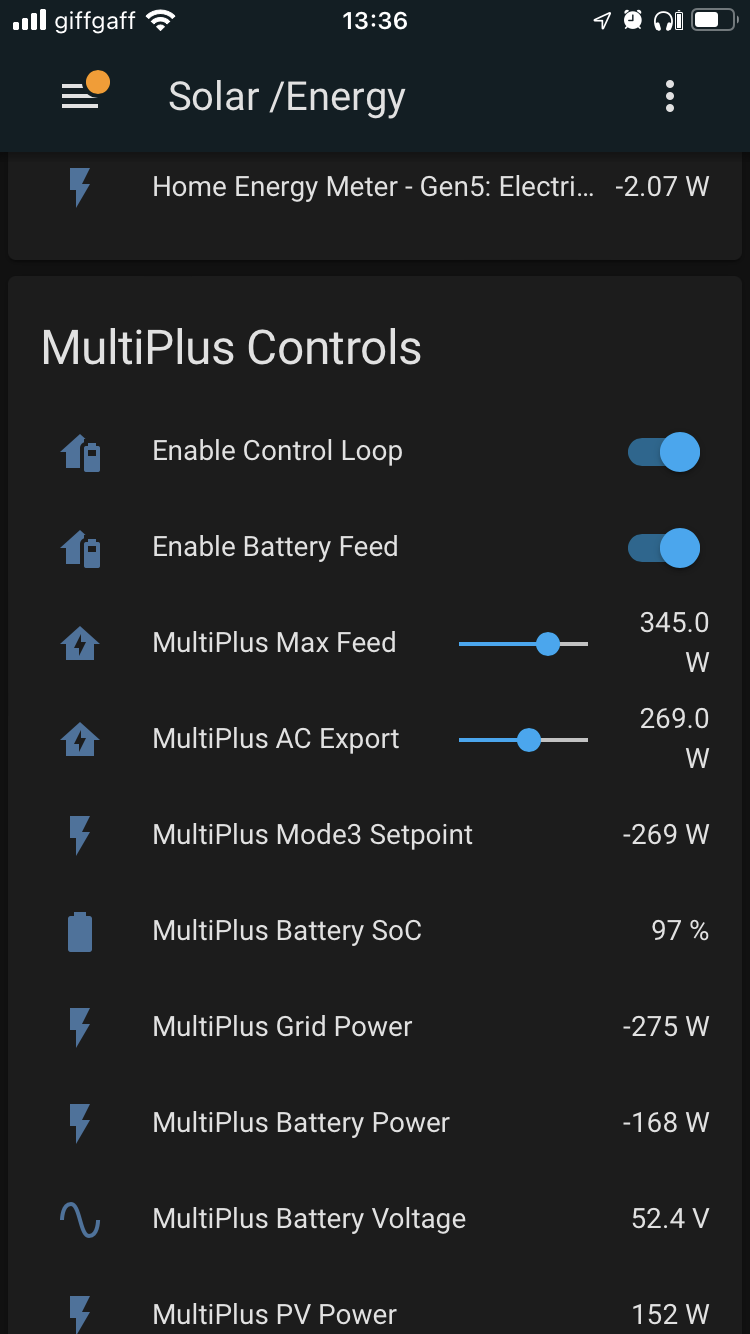 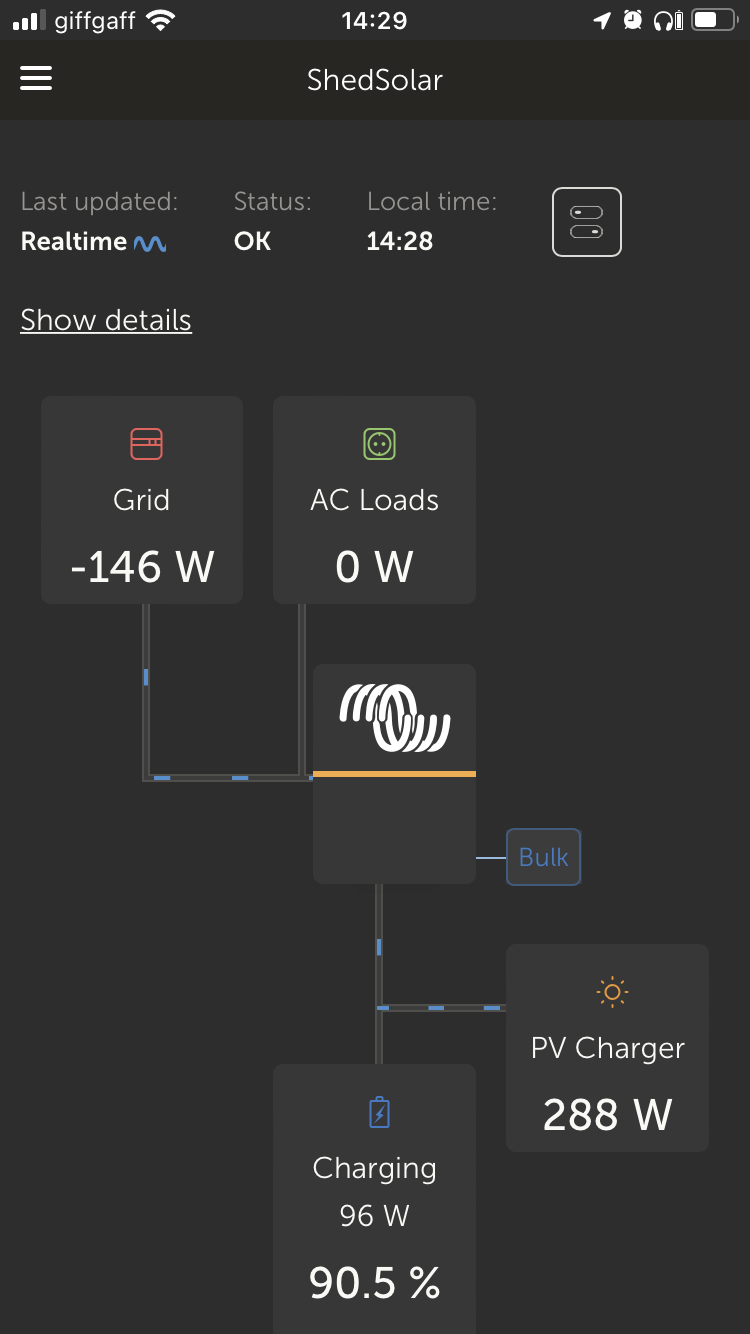 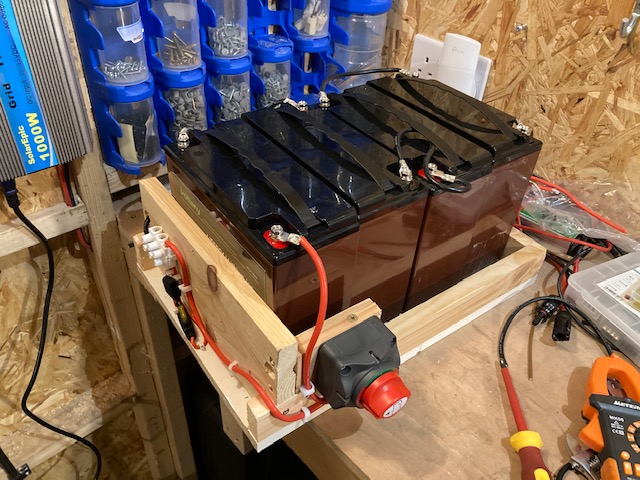 Forgot to order a VE Direct cable...so DIY'd one: 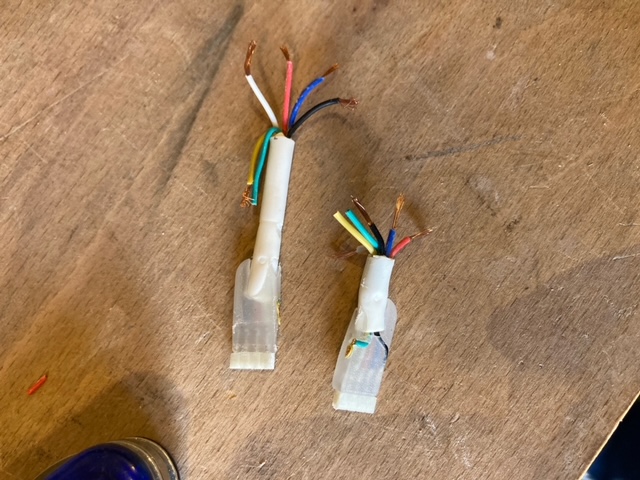 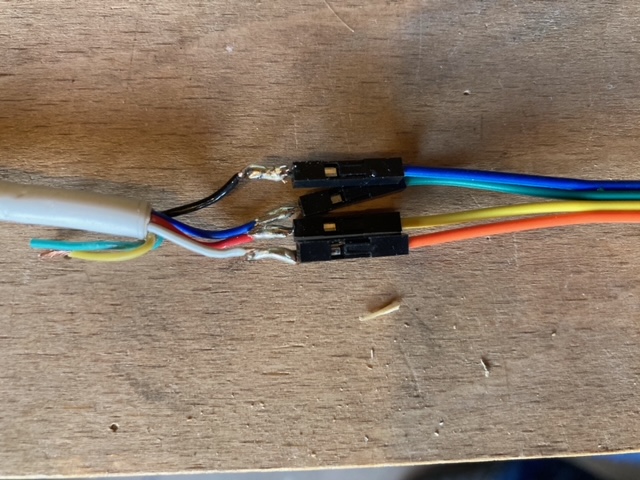 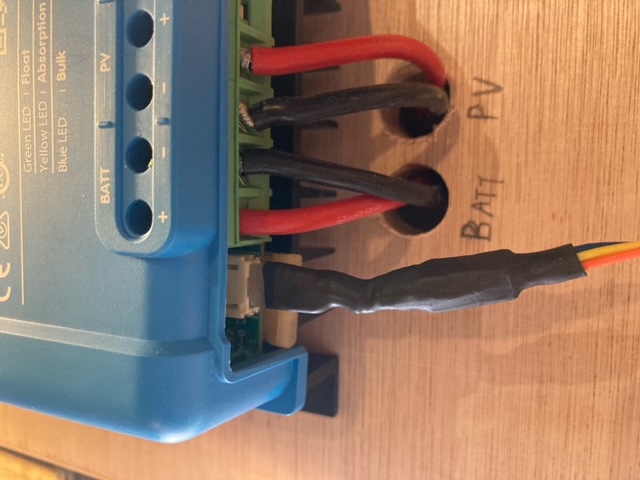 Extracts from my HASS config YAML files, for those who are interested

Here's a quick paste of the main control loop YAML (included in the automations attachment):

That automation writes out to a slider. Another automation triggers off the change to the slider and writes via modbus:

The forum's formatting corrupts the double-{ above, it adds a newline...you'll need to fix if you copy/paste.

This YAML isn't very "polished" yet, it is the product of a single late night coding, so probably not the best example to copy paste - use with caution ;-)

It doesn't even do export limitation yet - so I still allow excess PV to be exported to the grid. Easily avoidable by changing the range on the slider.

69 People are following this question.

My attempt at playing with Python Modbus & MQTT