Why would my 250/60 Smart Solar failing take out my BYD lithium battery system?

Apologies, this is a bit long, but I think necessary, in order to give you clever reders an understanding of the situation, hoping you’ll be able to help me:

My hydro turbine, running at absolute maximum speed gave 198V DC when totally unloaded, the water pressure in the line (96 psi) being as good as it gets. The 3-phase rectifiers I'd ordered hadn't arrived, so I had used the 2 rectifier method for getting the 3 phases into DC.

My Smart Solar 250/60 was “happily" doing the typical MPPT rollercoaster revs/voltage thing to the turbine, as the MPPT constantly played with the load. Fast, slow, fast slow.

I wrote to Victron, suggesting that they write a firmware update for hydro (these units are the most recommended ones for hydro generation that I've run across so far) with a button in the bluetooth setup for "Hydro", giving the option to adjust and set the load on the input, not just the output. Their repeated negative responses to my emails weren't the most humble ones I've ever received.

I had the Assistants in my main Easy Solar unit all set up (thanks Ben Stanton) to turn on a 1200W heater load when the SoC reached 98%, and off again when the SoC dropped to 85%.

All was good, the hydro was getting around 800W, until after a few hours, it suddenly spun up to full revs.

I closed the water valve as fast as I could, and discovered that not only had the 250/60 stopped, the entire lithium BYD battery box, and my main Easy Solar system had also crashed.

After an hour or so of trying to reboot everything, I finally figured it out - I got everything disconnected, and reset the batteries with their small reset button, reconnected the battery breaker to the Easy Solar unit, then the solar panels, and after getting AC supply back on (after numerous looping AC cutouts after 4 or 5 seconds, even while running just one 6W light bulb (batteries were about 45% SoC)) I finally got the AC on and stable again.

I reconnected the Smart Solar 250/60 to the battery again, checked the logs, found it had hit 260v and cut out. This was a mystery. How could it speed up past the no-load revs?? The only thing I can think of, is that the strange rectifier setup, combined with the 250/60 unit at the other end of the cable, conspired to give the turbine a little extra push. Or that the F&P motors have some kind of free energy ability… Anyway, I set the turbine spinning again with a bigger pair of water jets, less speed but more torque.

All was good again, until the the weather changed and the creek got low, so I turned off the hydro for a few weeks. The 3 phase rectifiers arrived, so I installed one in place of the 2 square rectifiers.

Just as I was soldering up the heavy red and black DC out wires from the rectifier, visitors arrived, and I hurriedly failed to squint carefully enough at the tiny + and - markings of the rectifier, getting the DC polarity reversed. Grrrr...

When I fired the hydro up, the Smart Charger got about 190v DC backwards across the PV in terminals, which killed it dead. I was kicking myself for not including a breaker both in and out of the unit. The same strange crowbar fault happened to the BYD Battery box again, taking out the whole system.

I went through the process of getting everything restarted, with the usual 4 sec AC cutout loops, etc. When I repeatedly failed to get any sort of response from the 250/60, and realising that the warranty was voided by my mistake with the wrong polarity, I opened up the case (took about a day and a half, involving chisels, drills, a big hole saw and grinder cutting disc, due to Victron’s obsession with epoxy resin) to see whether Victron had thought to include an internal fuse. There were 2, both blown, and the 6 big capacitors were all snapped off, and needed to be replaced, due to Victron thoughtfully encasing them in resin as well, so they’d be destroyed if someone managed to get the lid off. The Victron company plummeted drastically in my opinion that day... I couldn't see any other signs of damage, apart from some heat marks on the heatsink underneath the fuses.

Anyway, I replaced the capacitors, re-soldered the 3 other components also unseated by the resin, wired in external 20A fuses to both the input and output internal fuses, and hooked the unit back up to the battery. Clunk went the Easy Solar relay, and the whole system went down again, batteries and all as before.

I'm wondering if there is some sort of temporary “protection" short across the battery terminals?

The resistance across them is 0.1 Ohms. Same with the PV terminals.

Hooking up the unit to an old 12v battery with about 1mm cables there is a small to medium spark, and the cables slowly warm up. Is there any hope for my unit? Is there a way of resetting the unit without the bluetooth?

Update - I managed to get the heatsink off the underside of the circuit board (no more anti-tamper measures, thankfully) and found 2 of the 250v mosfets blown. The 2 massively-soldered components I'd assumed were fuses looked to be something else, when seen from below. Perhaps they aren't blown as I'd initially suspected - they both have a few milli ohms resistance through them. Does anyone know what they are, and what their specs should be? See photo. 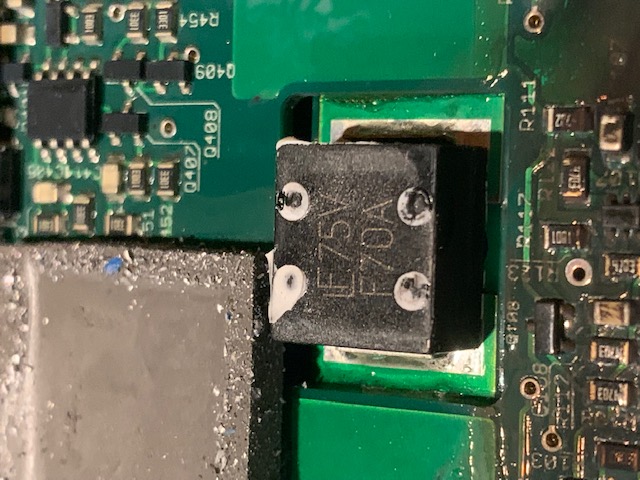 I'll replace the mosfets when they arrive from overseas and try again.

I'm planning to try a Tristar PWM charge controller for the hydro next - just have to get the generator output halved first. Does anyone know the correct ratio of number of copper windings on each pole of my F&P stator to output voltage? I can count the turns, then work out the number of turns mathematically, but I don't know if the revs will increase due to the lower load, changing the voltage again.

Batteries will not hold a charge after crash