I have a small travel trailer (caravan) which I want to add a 100Ah LiFePO4 12v battery and charging from car while towing, solar, and shore power when I have it, which won't be always but enough I want it around.

Solar will be ground mount, mostly so I can have shade over the trailer and still have solar. It'll probably be a 150 folding "suitcase" solar panel for trips where I don't anticipate a lot of loads and I'll be there a fairly short time (1-5 days). For longer trips, I have a couple of old 235W 56V Vcc house panels in parallel.

I don't particularly expect 110v AC loads, so no inverter, only DC loads.

I plan to mount everything to an appropriate piece of 1/2" plywood, run all the wiring I can, and then put standoffs and a piece of acrylic/plexi over top, which will have a section that's hinged for the disconnect switches (other than the battery, which will be placed right next to it). That will then go into a compartment which does have venting up at the far top to the outside. I might add a small temp sensing fan so if the compartment gets a little warm, it'll turn a small 12v fan on to help provide a little extra airflow.

Solar will be some MC4 pass-through to the outside more or less in the same compartment as the components.

Battery will be in a separate compartment, smaller, with I think 6-8 feet wire run length. Should be close enough for the shut wiring, and I plan to run 4 or 6 awg wiring.

I have cut-off switches on everything so I can isolate them from the battery when not in use, so there won't be any non-useful loads. Also planning on cutting off the battery when parked in storage, although as you'll see the BMV will still be connected since I've ready it's idle draw is in the mA range, so should be fine since it won't be sitting there for too long.

All of the loads will go through a 12v blade fuse box, each fuse sized to the load.

An outstanding question I do have is can I hook the BMV VE.Direct to SmartSolar, it's shown that way in the wiring diagram, but I'm not sure if it does function the way I expect that way.

So, what am I missing, what have I forgotten, what am I doing wrong or could be doing better? 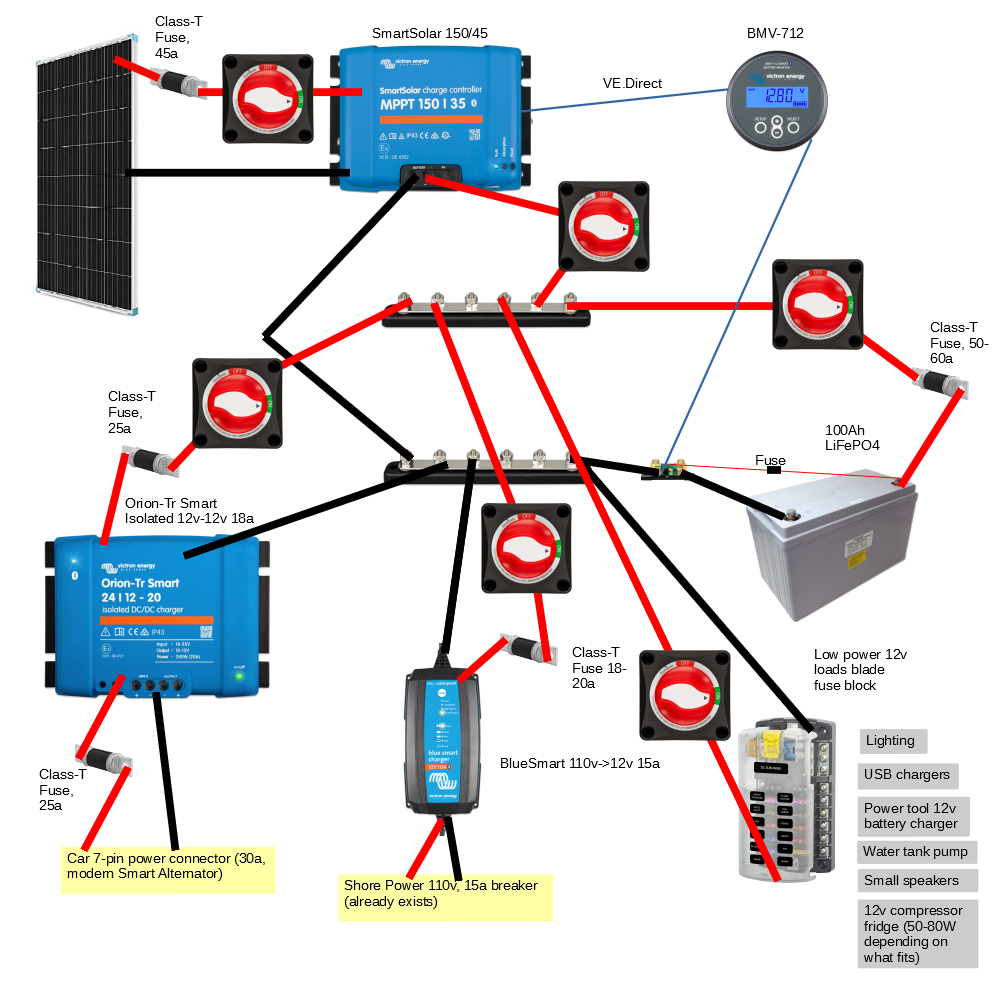 63 People are following this question.