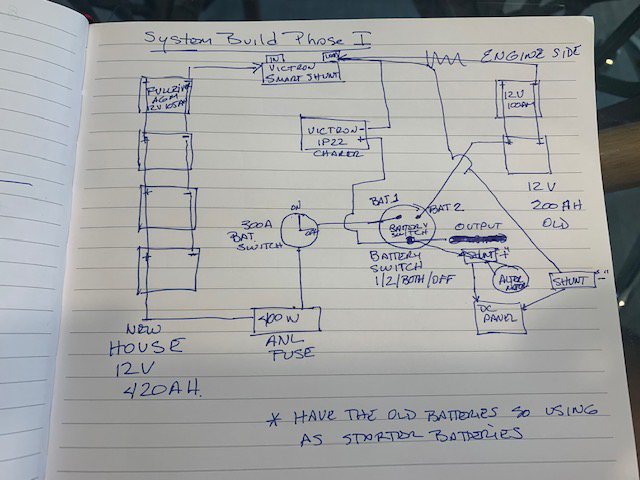 This is Phase I of an expansion into solar and a Victron Multiplus Inverter/Charger and MPPT Controller, but for now I have to take in stages because of cost. So here is my current situation.

I am expanding the Battery Capacity on my Sailboat. Data Points:

2. I am keeping the old batteries for now and connecting them in parallel to use as engine starter battery 2 Seal Lead Acid 12 V 100 AH. Keeping them in Parallel.

3. For the new House Bank, I am using a Victron SmartShunt to monitor Batteries.

4. I know that I can use the SmartShunt to also monitor voltage on the Engine Bank, but this means connecting the Negative side of engine battery bank to Load side of SmartShunt.

5. I am installing an IP22 Battery Charger (3) to charge the house bank as it has 30A capacity and this should be good to keep things moving for now.

Can I use the IP22 to also charge the Engine Battery Bank? My concern is that both battery banks negatives are connected to the SmartShunt. Which to me seems this would be a problem.

I figure that if I do not use the SmartShunt to monitor the Engine Battery Bank then, I should be able to use the IP22 Charger to charge both battery banks.

Still using the SmartShunt to monitor both Battery Banks. So all Neg from batteries are connected

Thank you all for your assistance with this puzzle question.

How to disable Storage mode in IP22 Bluesmart chargers?