IN - OUT frequency difference on VRM

On VRM I see a frequency difference between IN and OUT in advanced view.

Can this difference be somehow explained? 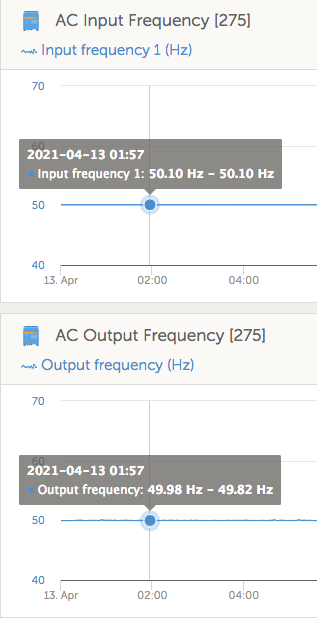 "Can this difference be somehow explained? "

I have no "long version" unfortunately :o)

Possible, but why only on the AC out?

Also, is AC-in and AC-out physically connected when grid is present?

It seems like, you will have to wait for someone coming by with the "long version" :o)

But in reality it doesn't really make a difference. What are you concerned of?

"Also, is AC-in and AC-out physically connected when grid is present? "

I noticed, you like to edit your Question/Comments after they get answered by someone else, which makes it sometimes difficult to keep up a straight conversation.

I do not edit my posts after someone answered intentionally.

I edit after reading my post placed if I have something to add.

When I do that I do not see the answer that was posted because to see it I would have to reload the page.

My PV inverter is now connected to AC-out.

This inverter reacts to frequency change on the lower side of 50.

It lowers production when frequency is below 50Hz not like Fronius when FQ is higher than 50Hz.

But as the grid (AC-IN) is physically connected to AC-Out, does your PV inverter lower production with 50.1 Hz present on AC-IN?

My inverter turns of production when FQ is over 50.3 Hz.

It adjusts production proportionally when FQ is in 50 - 47Hz range and turns it off below 47Hz.

So the answer to above question is "no"?

"It adjusts production proportionally when FQ is in 50 - 47Hz" I never heard of a PV-Inverter doing it that way.

How does your system behave in "islanding" or "offgrid mode" when you disconnect the grid. Does throttling of your PV inverter on AC-Out work as expected?

Maybe this is the reason why the maker of this inverter is no longer in business. This, and the fact that he did not respond to service calls.

I do not know yet how it will behave without the grid.

ESS assistant is not yet loaded because I am not yet comfortable in doing it myself.

Four months ago I payed Victron installer for install and setup of 3 additional MP-IIs and ESS setup of my system but he is not very eager to finish the job. He started it a month ago left the following day to get the power meter, and is silent since.

I did all the hardware setup work for him by wiring those additional MP-IIs in parallel to my 3-phase system.

Couple days ago, tired of waiting for him, I installed ET340 on the PV output and now I can see the PV production on the VRM dashboard.

I am trying to learn this myself by asking questions here and watching training events.

Probably soon, I will decide to do the ESS setup myself.

Oh, I understand this situation is frustrating.

But I admire your attidutde, to learn and do it yourself.

You will see, you will have a good working solution in the end, that you understand for yourself and you will know for 100% how everything works. It seems like, you might have a good understanding of how stuff works.

Between us 2: It took me maybe over a year of rather intensive work with Multis, to fully understand how a Multi works and all the different ways you can use it. Not only because I am a slow learner, but because it is a pretty complex matter, that disguises itself as if it would be simple .

I thought from the first day on, I know how it works, because it is a simple battery charger/inverter. Now I know, that I didn't know. :o)

And I have by far, not finished learning

But aside from poetic conclusions. The community is here to help you. ;o)

If you want to, I can give you access to my working 3 phase ESS cabinet system on VRM. So you would have a system to look at and learn.

From the beginning of my adventure with PV, I wanted to do as much as I can by myself, but the first setup was done by the "proper" installer because for a legal reasons of getting the system connected to the grid.

It was utter fiasco.

Only the mounting frame on the ground was done OK. Maybe because I was there all the time helping them.

After that fiasco I am doing as much as I can by myself.

I had to rewire the whole installation including the digging of a 70m long trench to replace the wrong casing pipe the DC wires were placed in.

Of course had to replace DC wires too, for they were 4mm2 and should be minimum 6mm2.

This installer connected them all together and used only one DC over voltage protection between panels and the inverter, and to that one point, connected 3 MPPT inputs of the PV inverter. Probably wanted to save money on the other 2 DC protection units.

I struggled with this setup for over a year and the inverter maker went belly up.

At that point I called Fronius because I wanted to replace my grid-tie inverter with the hybrid inverter.

Fronius suggested to go with Victron, and since I did not know much about Victron I started to read about it.

Couple months later I had my 3 phase system at the wall of my "power station".

It is not finished because I am still waiting for parts from my Victron installer but it is working as a UPS. 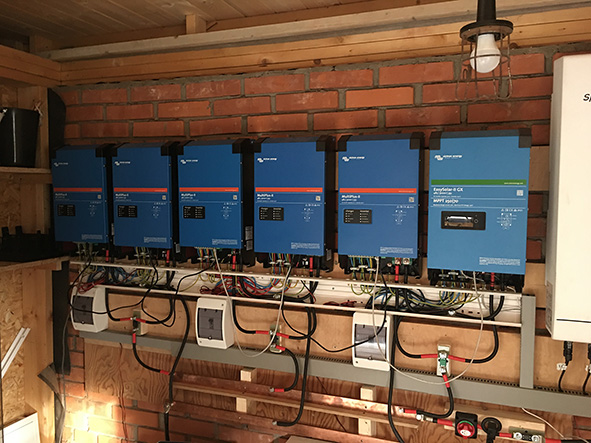 Only you would have to instruct me on how it is done.

You have a beautiful installation.

I am sure, you will have lots of joy, when it is all finished.

I have added you to my installation, it is actually reflecting my 2ppl. household.

Have a nice day!

The frequency difference or shifting is an intentional thing as part of the program of ess as far as i know or understand. One of the mechanisms to do with the way feedback to grid is prevented.

You have awesome grid stability by the way! Our ess works hard the grid is always shifting frequency very unstable in bith voltage and frequency.

The other thought here is as mentioned in a previous comment, the Victron is not a lab measuring instrument and never claims to be, have you actually checked the input and output with an ocilloscope? That would rule out whether it is an actual problem or just a position of a sensor internally causing a slight difference.

when grid is present, the AC-in is physically connected to AC-out. So there can never be any difference in frequency as long as the grid is passed through the system.

Hi Markus, Ess is a frequency shifting program it can shift frequency after the unit but not before, so by nature can cause a difference.

The other thing that can affect this is wiring issues usually with undersized cables.

Sorry, I have to disagree.

Look at the block diagram of a MP2: 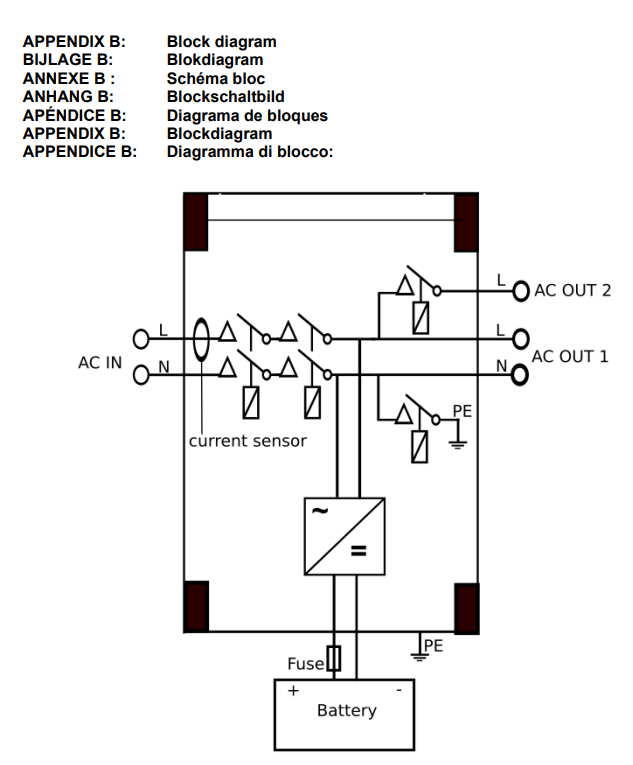 Because there is a physical connection between AC-in and AC-out, the frequency can never be different on AC-out as long as the grid is present and passed through.

But I am open to discussions ;o)

Frequency Shifting in ESS does happen, if the grid is not available and the system has to throttle a PV inverter on Ac-out in offgrid mode.

The ESS assistant is not present in my system.

For now it is just UPS for my home.

Then it will be LOM detection are you using Type A or Type B?

LOM detection trys to change the frequency of the grid.

As long as the grid is present, it cannot do that.

I do understand that it cannot change the grid, but if it does it disconnects.

I have graphs to show on grid failure the frequency change in ac in shortly before grid failure. There is an interesting change in the internal resistance of the unit that happens when it is pushing back against the grid to frequency shift it. If it is able to raise itself higher than the grid or shift the grid itself it disconnects.

But as from mareks next reply this is also not the issue. Maybe there is something deeper in the works than I know is still at play. In any case a LOM function of some kind would still need to be there in the programming so the feedback relay opens for safety.

and no, we are going off track of Mareks questions :o)

But an additional claim I set up in regards to the original question:

If you manage somehow to have different frequencies on ac-in and ac-out when grid is present and passed through the Multi, the result will be fireworks or magic smoke. ;o)

In my grid settings the transfer switch is controlled by AC-in voltage.

My VEconfigure setting for Grid does not give mi LOM settings to choose.

Maybe I am missing it. 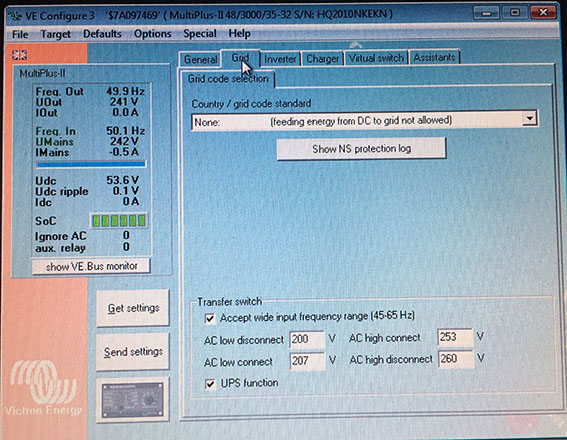 LOM setting is only available if you select a grid code

I tough so but I do not know everything yet. :)

Unfortunately there is no ESS assistant in my system.

I have a second unit that measures the grid parameters and it measure the grid FQ.

That is interesting. Maybe because of its grid changing and the Victron always trying to do the synchronizing its always changing and all you seeing is its constant changing coming through?

I was just running over graphs from a few sites and there seems to be a 0.11 hz to a 0.15hz difference even with all the fluctuations we have in grid using the Victron VRM graphs

How is the difference for you? If it is constant maybe it is designed to be like that.

sometimes a 0.06hz when the grid is more stable.

Even the slightest difference in freq. between ac-in and ac-out would lead to the two then different sine waves hit itself and causing trouble.

You can see the difference MP-II reports in my first post.

There is slight ripple visible on the AC-out FQ VRM graph and there is noting on the AC-in FQ graph.

35 People are following this question.