Maximise use of solar panels

I have been experimenting with the DVCC setting of the Venus GX and the configuration of the Quattro in order to maximise the output of the solar panels. So far I have concluded that when I use an assistant in the Quattro configuration that switches of the AC in, then I get a lot more out the solar panels (see screenshot 1 below). When I do not use the assistant and AC in is connected to shore, (see screenshot 2), solar output sometimes even goes to 0, but mostly around 50 W.

I have read and studied all manuals (Quattro, GX, MPPT) in english and dutch, read approx. 100 postings on the community site on similar subjects, but I still cannot find the best configuration for the Quattro and the DVCC setting.

The following is stated in the GX manual:
-" Enabling DVCC changes a GX device from a passive monitor into an active controller"
-" DVCC offers features such as a configurable system wide charge current limit, where the GX device actively limits the inverter/charger in case the solar chargers are already charging at full power."
-"Limit charge current. This is a user-configurable maximum charge current setting. It works across the whole system. MPPT Solar Chargers are automatically prioritized over the mains/generator."

My expectation was that by enabling DVCC with the charge current limit and STS,SCS and SVS enabled, that the GX would make sure maximum output comes from the solar panels and the output from the Quattro is reduced. But as shown by the screenshots this is not happening.

The only way that I was able to maximise the output from the solar panels was by using an assistant that switches off AC in of the Quattro, when the batteries are above SoC of 70 %. Once below 70 % it then reconnects AC in and batteries get charged to 90 %. After that AC in switches off again and solar panels take over the charging. This will work on sunny days, but a longer time without a lot of sun results in a lot of shore power being used to bring the batteries every time back from 70 to 90 %. Over a longer period of time this seems to use more electricity then letting the Quattro keep the batteries at 100 % continuously.

Any suggestion/help is appreciated, because I want to lower the shore power electricity bill and use as much solar power as available. 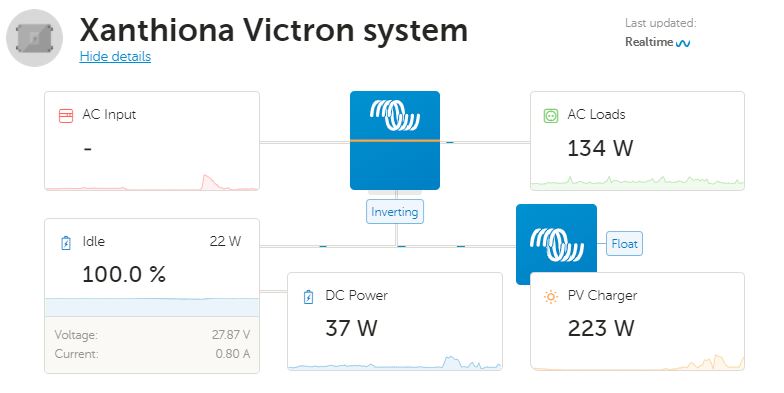 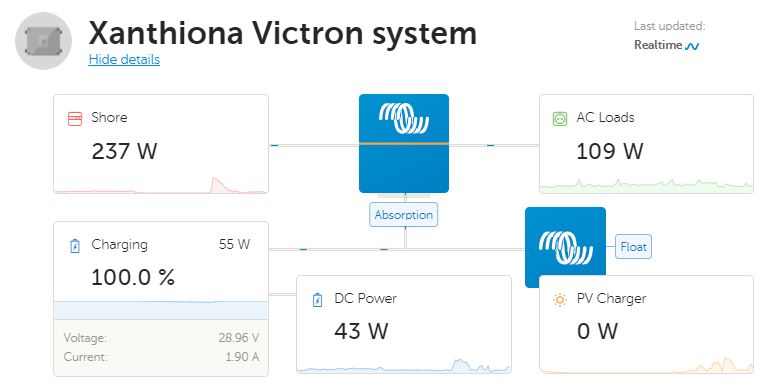 That GX manual quote applies only to the 'charge current limit', and it probably wouldn't apply with such a low wattage as you show. It would appear in your 2nd screenshot that your batts are at Absorb V, and then both chargers will fight it out between themselves based on their targets.

With DVS active I find that lowering the Quattro's target just 0.1V below the mppt's is enough to give the mppt priority, but make sure that temp compensation of both chargers is the same, so their target is the same. And of course both getting the same batt Temp via STS.

Do you really need a fast charge from mains? You could drop the Abs target much further and still get charge, although slower. Or schedule your mains during night hours, especially if you have offpeak rates. In this case you may not want another Abs sequence at night, so you might set to just a Float V level.

Or set a charge limit on your Quattro, which should work independently of DVCC.

We don't really know your situation, but my own procedure is to let solar have the day to itself and bring on a generator in early evening to finish what it couldn't do. You decide, but there's plenty you could try once you've determined what your aims really are.

Hello JohnC, thanks for your response. The installation is on board a yacht. I have to pay for shore power and it is triple the price of what I pay at home, no night rates. There is continuously some equipment on and draining power. There is no generator.

My aim is, as described in the case, to maximise the use of solar and reduce shore power cost. I have lowered the Abs and float voltage in the Quattro with 0.2 V. Even after that I see that solar is not being used at it's maximum, the moment I switch of the shore power, I see a big jump in the output of solar. The screenshots show a rather low wattage as I took them late afternoon, but at mid day and full sun and a higher wattage, the result is the same. With shore power a lot lower output from solar panels, without shore power there is a lot higher output. So I conclude that DVCC does not exactly do as described in the manual: that the MPPT charger is taking priority and that the GX active limits the inverter/charger (Quattro).

I tried with an assistant in the Quattro to switch shore power of when Soc is above 70 %, so that solar was being used at it's maximum. Once below 70 %, shore power would kick in and bring SoC back up to 90 %. Early in the season and when multiple non-sunny days in a row, this would result in more shore power being used, then when I actually would have kept the batteries at 100 % SoC with shore power on continuously. So using that assistant defeats the purpose. Overnight, due to the equipment, the battery will drain approx. 8 - 9 %. With sufficient sunny days, the solar will in the day bring the battery back up to 100 %. But eventually when not enough sunny days, the battery will go below 70 % and shore power is needed.

The ideal situation would be that I leave shore power on continuously (no assistant needed) and solar is used at it's maximum to keep batteries charged and as little as possible shore power is used (to reduce cost). This is supposed to be accomplished with DVCC enabled (according to the manual), but I do not see it happen that way. So I am still waiting for the ultimate answer. Tomorrow should be another sunny day and I willl go to the yacht to fiddle with the settings a bit more.

I think you may have missed the point with what the manual says. Anyways, consider this..

Don't run your shore during solar hours. Have it come on after dark if SOC is <75% (say), and shut off at >85% (say). Then it won't start again before dawn, and with some depletion overnight there'll still be something for the solar to do the next day.

Also, lower your Quattro charger Abs setpoint to the same as Float. So it won't charge hard, but the SOC at least won't go lower.

Limit the charge current in the Quattro (not in DVCC) to make sure it doesn't push too hard. I can't suggest a value here, as I don't know your batt size or loads.

What you want is an aim, a regular one that works for all conditions. Like never let SOC go <75%, never compete with the solar, and leave enough 'room' in the batts for solar to give it's most.

You'll need to fiddle with this a fair bit to get it right I'm sure, but I'm also sure it can work for you.

I appreciate the concern with high power costs, generators aren't cheap to run either. The difference with them is that they're best run hard to reduce run time. But the overall aim is still to maximize solar.

Hello JohnC, thanks again for your input.

I do believe I understand the manual correctly, but my system did not do yet do what I expected according to the manual. This was till yesterday afternoon, when under sunny conditions I saw the following behaviour between Quattro and solar charger. I took the values each time after approx. 15-20 minutes.

Now I can clearly see that the Quattro charge is throttled back while the charge by the solar panels remains more or less consistent.

You further suggested to use shore power only after dark. How would you establish that? I believe the Quattro does not contain a time/date element, so this would not be programmable in an assistant. But this is very interesting point.

JohnC triggered me to find a solution where the Quattro is not charging during solar hours. I enabled in the Venus GX the Generator start/stop functionality with quiet hours from 08.00-18.00 hours during which AC 2 (shore power) of the Quattro is ignored. I further established some conditions in case SoC of batteries is too low or in case the load by some equipment is too high.

See this link for the explanation: https://community.victronenergy.com/questions/85215/can-gx-generator-startstop-feature-control-ac-in-o.html?childToView=86026#answer-86026

This thread can be closed.

41 People are following this question.