This issue as been discussed before, but still it is a problem - and a very serious problem

I now expect the battery system to keep a maximum of 500W imported power.

This is not happening.

When I turn the own on, the total on that phase exceeds the power the victron can give at the moment.
The inverter on L2 is doing what it can, but it cannot compensate for the full load, and 500W is beeing bought from the grid.
The other two inverters are not helping L2 to zero the feed in. They are just zeroring their own phase.

Solar about 40 W per phase

Expected:
When L2 has reached its maximum, L1 or L3 should produce mote power, and even sell power to keep the grid point at 500W

There is no differance in behaviour between "Total of all phases" and "Individual phases" The result is exactly the same. There is no change what so ever.

Expected behaviour is: If grid point is set to 500W, This should be obeyed at all times, even if two phases are selling and one is buying, as long at the total is equal to the grid-set point.

This is a MAJOR bug. This makes the ESS useless out of a zero-feed-in scenario.

Most electricity companies where I live have "Total of all phases" as their means of billing.

Expected:
"Total of all phases" = make total to grid-point even if it makes other phases sell or use more power that the individual phase requires

Attached pictures show the system with a "grid set point of 500W and "total of all phases""
Yet it is still importing 452W more that expected, even thought L1 and L3 are hardly doing anything (especially L3)

In DBus/MQTT under Hub4 I see values changing the whole time for L1 to L3, and they are the same as the "AC loads" L1-L3 (some update delay, hence the small difference while taking the screen shot)

Something is telling HUB4 what to take from each phase. VenusOS?

If that is the case. Is there any other way to control the MultiPlus without the "ESS Assistant"?

@Daniël Boekel (Victron Energy Staff) Would it be possible to get in contact with whom ever is the product owner of "ESS"?
We are many, and we have a problem, and you could fix it and make us happy! 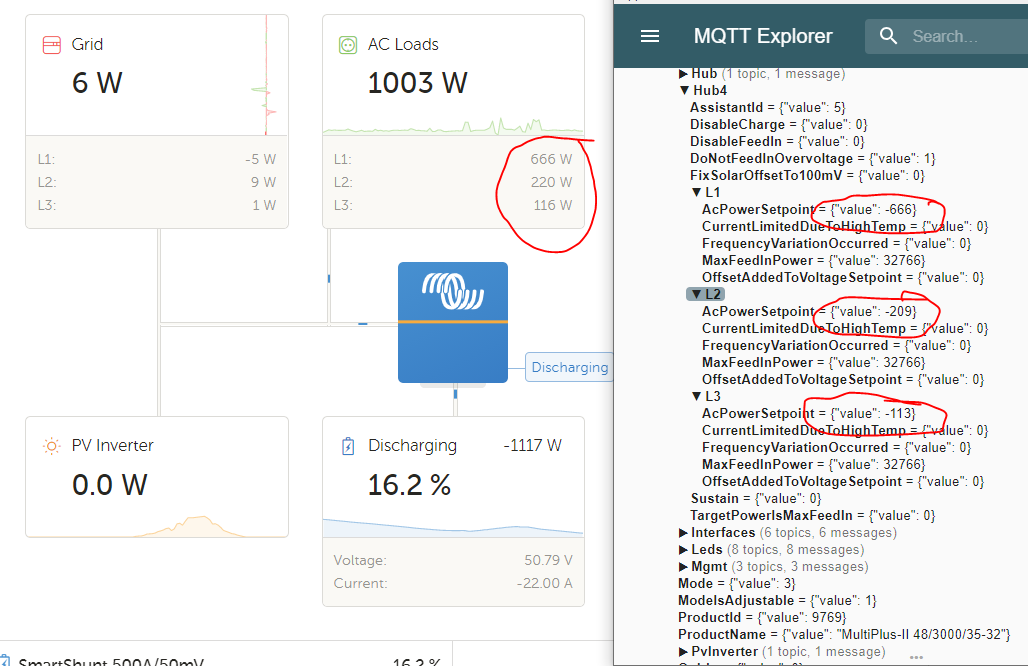 you can read al about the other options here:

I was more on the line if you could direkt me to someone that is responsible for the ESS?

As stated in numerous posts, ESS is clearly not doing what most of us wants it to do - ZERO Electricity bill.

Perhaps, ESS is not the way to go for a grid-tie setup in a 3-phase setup. Maybe what we are after is not invented yet.
How can we get victron staff interested in helping us solve a very big problem?

I assumed the phase compensation worked in a 3 phase system running ESS, so sum of all phases would add up to grid set point value specified. If this is achieved by compensating actual use up to max on each inverter before activating support from any other inverter, or by exporting the same amount on all phases must be decided by efficiency. Surely Victron fine engineers are able to solve this.

Why not instantiate a virtual grid meter that reports the grid-sum / 3 so each phase has the same load. Then instruct each MP to use this virtual grid meter. This would probably lead to system working perfect even on grid failure. (if AC-out1 is used.) :)

You should read ESS manual. You have wrong meter. For net metering, you should be using a EM24.

These meters have a different way of calculating the total of energy imported and exported.

In the ET340 - the energy imported and exported is counted at each individual phase and then the Total is provided from the sum of those values.

In the EM24 - the energy imported and exported is counted as a total power, with net differential readings from each phase cancelling each other out.

Which meter is best to use with depend on your countries own metering configuration. It is most common in Australia and Germany for example to only be billed for the total in a 3 phase system. So it is more accurate to use an EM24 to match the billing.

So if you are exporting from one phase, and importing from another phase after the energy meter, but before the billing meter then you will not be charged for this, and the meter should not count it as an import and an export.

This is also how Victron’s phase compensation feature works, to make the most of the cost savings for an ESS system when there is a differential in generation and load across different phases.

And if you read woliver's response, the grid meter does not matter. He has tried both and it is still not working.

It would be nice if everybody would stop excusing the fact that victron has failed 3-phase setup completely.

Why even call it three phase, when it is actually just three single-phase inverters, one does not know what the other is doing.

How do I get Victron developers real attention on this issue?

It is a real issue, there are many people affected, a lot of people reporting it, still "cannot be done"

That would be the easy answer. Read the manual!

I assume the majority of Victron customers are boat or RV customers that more or less is an off-grid solution. Not much work is done to fix grid-tie installations.

This is my grid meter right now. Charging of battery is turned off.

The victron system knows there is 2921W of available power.
But when charging is turned each individual multiplus is charging with the amount available per phase

And the same goes for inverting.

In the original post victron knows the house needs 3960 W

It could have evenly distributed 1320 W on each phase.

All the data is there, regardless of ET340 or EM24.
Victron knows the total and each phase. Simple math would solve the problem.

If there are specific rules for specific countries, eg net difference allowed etc, let this remain.
But implement an optional "even distribution" option or similar. 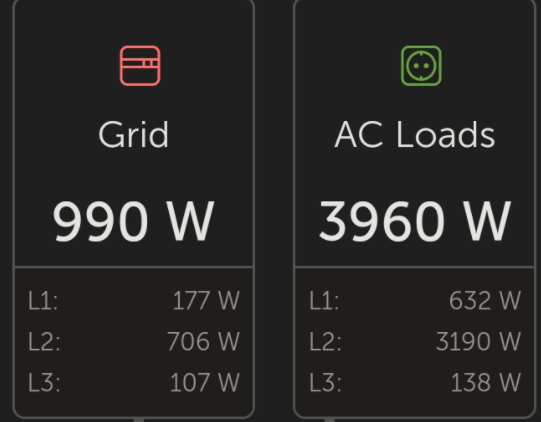 But if the load (oven) is on one phase, there is no way to supply power by Victron to this oven from 3 phases evenly.

Unless I do not understand your problem here.

On the other hand, when one phase draws 4Kw and MP-II can provide only 2.4kW the rest (1.6kW) has to come from the grid.

If the setting in your GX setup calls for no more than 0.5kW from the grid that the other two phases should feed the grid with the 1.1kW.

0.85 is the efficiency of the DC_to_AC conversion and is based on my experience with Victron inverter/charger (MP-II/3000)

The other two victrons L1 and L3 should then draw 530W each from the battery to even out all phases.

And the problem is: IT DOES NOT

The phases work completely independent from each other. Victron on L1 is focusing n L1 and L2 on L2 etc.

It you set the grid point to 0W, meaning "Try to buy exactly 0W from the grid"
When you select "Total of all phases" you want the GX to see all phases as a total and evenly distribute the power on all phases, or atlest zero each phase first, and then start exporting on the phase that is working the least.

I sincerely urge Victron to revisit this question. The answer cannot simply be "It cannot be done", when my simple car charger manages to read all phases and calculate how much it can draw on one phase so the total will be zero.

It is not the fault of the meter, I am also using an EM24 in my on-grid 3phase system with three MP2 3000. It is still the by victron given behaviour of the total phase compensation setting.

There was also a comment from Victron-staff in an older thread that this desired beaviour is not possible with multiphase compensation. (https://community.victronenergy.com/questions/53345/phase-compensation-is-not-working-in-3-phase-ess-g.html)

So to all the other comments here: Please remain objective and only provide practically verified information

Yes, before the EM24 I had the ET340 because after studiing the ESS manual and the Victron Webinars I thought the EM24 might be better. But that benefit of the EM24 Victron is talking about, the sum of the phases, is maybe concerned to 3phase grid with one MP2 in phase compensation.

All distributors in Germany I know are selling a 3F MP2 system with the ET340.

Hi, this desired behaviour is not possible with the victron ess in three phase. Look at this discussion:

Yes, I have seen discussions about this before, but I simply cannot accept the answers given.

Why have an option "Multiphase regulation" when it does nothing? There are two choices "Total of all phases" and "Individual phase" what ever you choose, the result is the same. 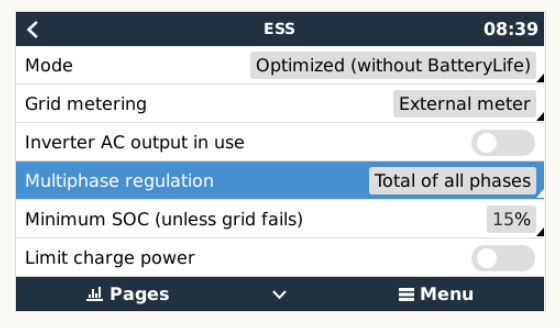 I have a "Zappi V2" car charger that can charge the car when the "Total of all phases" are less than 0.
It will charge with 6kW of power on one phase, as long as the total is below zero. If a generator (solar or batteries) provide enough to zero the load, it will charge with its full capacity, even if that means buying from one phase and selling on the two other phases.

Back to my "owen problem"

My system is grid-tie. Meaning I have all the power in the world and I am not limited to a battery. My electricity provider uses total "vector sum on phases" to charge the cost of electricity.
If I buy 3kW on one phase, and sell 1.5kW on two phases, there will be no charge.

I have the battery charged by solar during the day, and used during the night. I want to have "zero-feed-in", the sum to be zero. I don't want to buy electricity if I have power in the battery.

I am on your side with exactly same problem but there will be no solution without the help of updating the victron gx firmware by victron.

Once your load is switched on aand stabilizes, how long are you waiting before taking the screenshot?

the inverters cannot instantly cover the load, they ramp up their power slowly. The speed at which they do that is in the manual. It’s not instant.. from memory it might be 200w per second but that’s more guess than anything.

also, what three phase grid meter are you using? I’ve read the EM24 is the meter you want, not the other one.

Time is not an issue here. The own stayed on for 25 minutes. So there would have been plenty of time to regulate the grid-feed.
I have the ET340 3-phase meter.

56 People are following this question.

Safe to run a Multiplus without grid feed permanently ?