Can you use Victron’s products to add 48-V battery backup to an existing 220V, 50Hz, 3-phase, grid tie SolarEdge installation, and provide energy to the batteries when the grid fails?

I tried finding a suitable solution for this problem; however, I was unable to find one.

The problem presents itself when:

1- you have a 3-phase, 50Hz, electrical SolarEdge installation with a SE inverter and optimizers.

2- you want to add a 48-V battery storage only to one phase.

3- you want the existing PV array to feed the battery in case of grid failure.

4- you do NOT want to add additional solar panels or generators.

5- the capacity of the existing SE inverter is larger than Victron’s inverters.

It is too difficult or too expensive or both to solve this problem with Victron products.

I found a SE note suggesting solutions for this problem using a second inverter ONLY from SE to do DC coupling or AC coupling, or to replace the existing SE inverter with a newer inverter from SE compatible with optimizers and able to store energy in a 48-V battery.

However, these solutions, sadly, will work only with LG or SE battery systems. This limits tremendously the types of battery chemistries and options of battery manufacturers compatible with the newer SE inverter.

Yes you can by using AC coupled PV and 1x Mulitplus2 inverter charger, you will need a CCGX or raspi controller for the ESS system to work and a current CT for the Victron Muliplus2 to allocate how current is required to charge the battery bank be it Pylon tech BYD etc.

As i have a system which uses a 2.5kw 20 year Mastervolt grid tied inverter and other odd branded grid tied inverters plus a new Fronuis Primo as well all coupled to work with the Victron Muliplus2, which charges my 10kw Pylon tech battery bank etc.

I appreciate the idea, but it will not work. See problem number 5 above. If the SE inverter was smaller or the same size than the Multiplus, then it would work. This has to do with the Factor of 1.0 rule.

If you use AC PV coupled it doesn't matter at all, as i have about 6kw of inverters and 1x 3kw muliplus2 and works fine with no issues, no power bills and in credit all year.

I can see how in some cases your idea would work great. The issue in this case is a large SE inverter.

If the SE inverter was small this might work.

Unfortunately, the SE inverter is larger than 3-Multiplus inverters.

When you AC couple you can put the inverter on the input side not the output side then size doesn't matter.

This is how i have configured mine.

I asked a similar questions a few days ago, and Guy Stewart answered:

I have been thinking about your reply from several weeks ago as well as mine.

I did some research in Victron, and I found the following:

I am not sure, if this is relevant to our discussion or not, but it sure sounds similar.

This paper has disavowed the following: 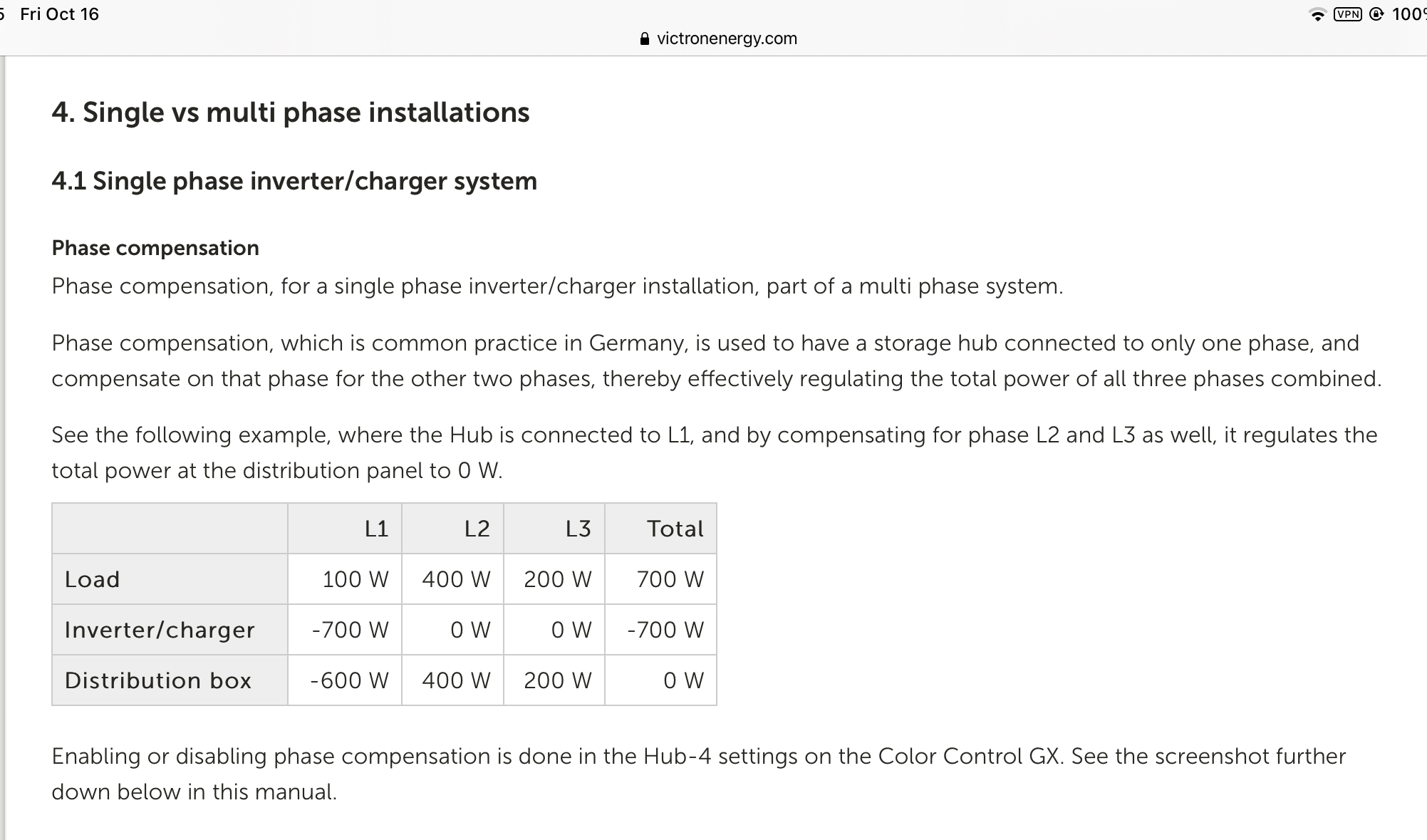 And perhaps, also, this: 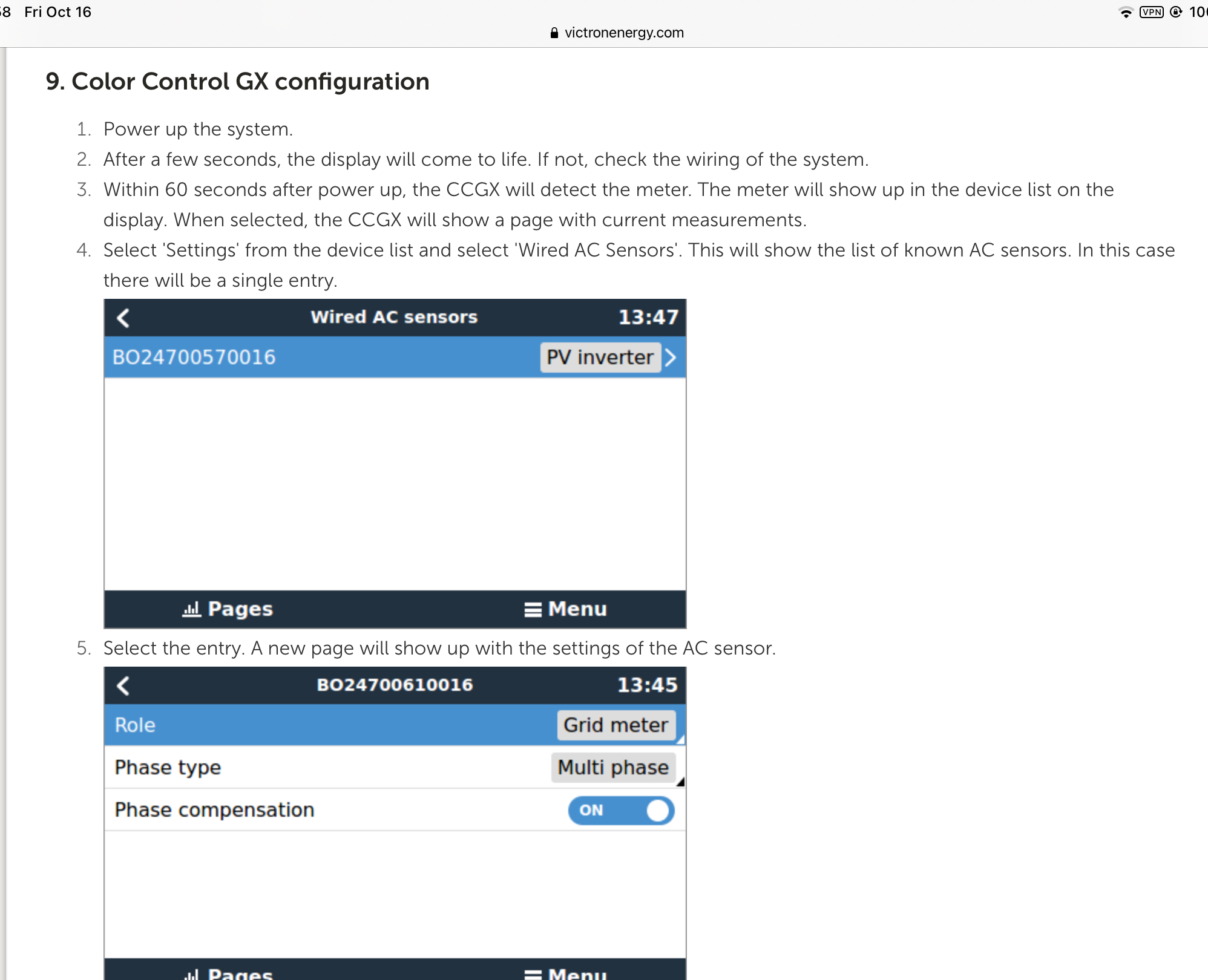 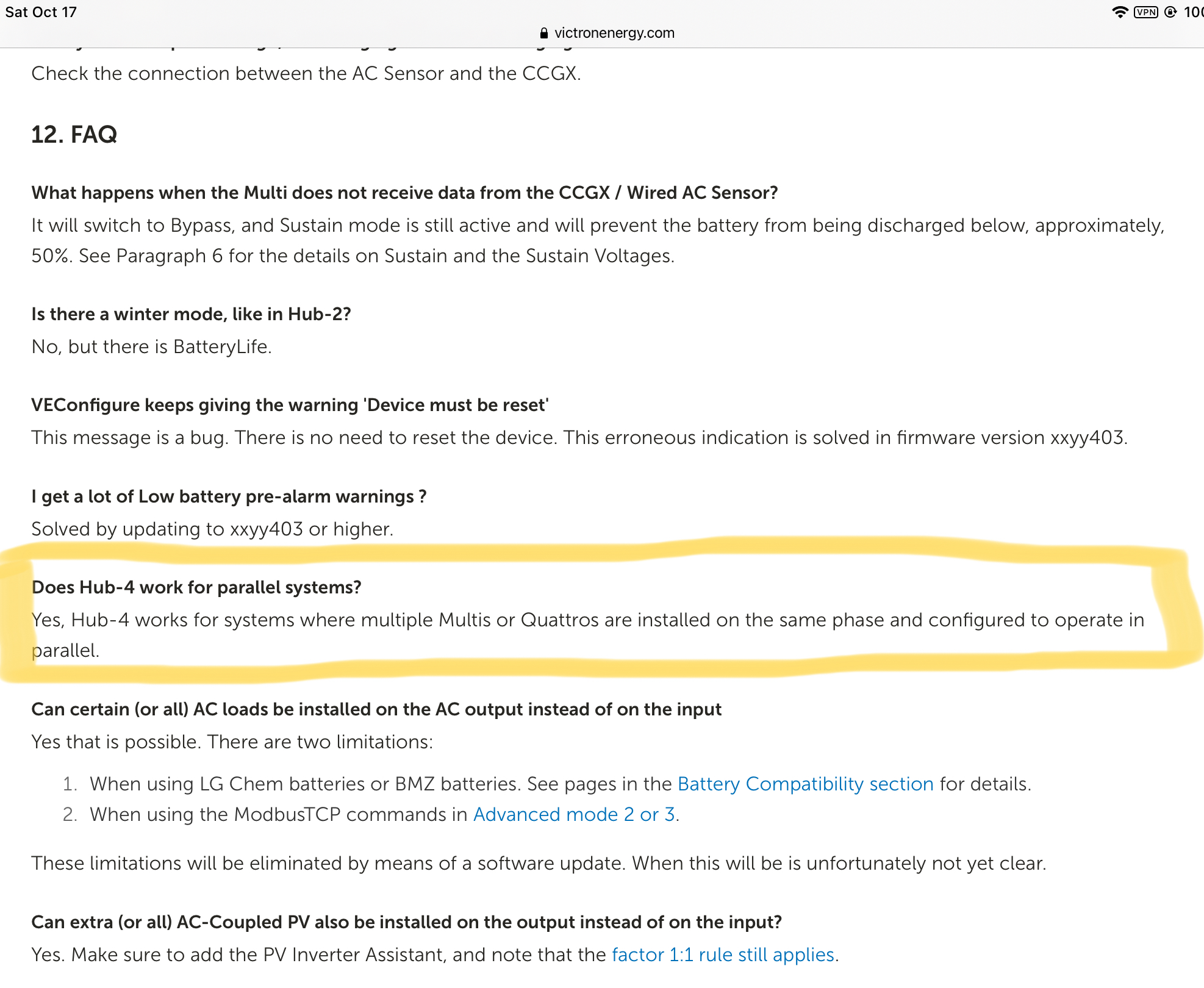 Unfortunately, I do not know if this is what Guy Stewart was referring, but it seems that using a single inverter / charger in a 3-phase line and compensating for the other two phases was promoted at some point at Victron, and it must have been useful to other people.

Is this perhaps what you meant?

Is it possible that your system is an AC parallel system rather than an AC couple system?

Would it make much of a difference?

The most economic solutions I could figure out are the following:

I found out that based on news reports not official reports that SE may have suggested support for different 48V batteries later next next year.

This implies replacing the existing inverter capable of using a high voltage battery for a new inverter able to work with a 48V battery bank.

A possible, new configuration is as follows:

A single phase DC coupled Victron inverter could be used to charge a battery bank using a portion of one of the solar panel strings, and, a different, smaller (than the original SE inverter) 3-phase, grid tie, inverter could make use of the remaining solar panels.

This maintains an efficient usage of DC energy, and it maintains a 3-phase grid connected inverter.

One problem I see is a possible unbalance between the phases.

Let me know what you think.

there are a number of ways to look at this.

you could as is suggested put the victron inverter between your load and your Solar edge ac-coupled inverter on one phase. You would connect the Input to the system and the output to the load. The inverter will not see the AC coupled solar array as anything but an input. this would mean while there is available energy from the grid your inverter will either be topped up with solar energy or grid power. when grid power is lost your ac-coupled solar array will not work and you would work directly from the batteries until such time as the grid is restored.
If you wanted to install a battery backup to protect you and keep in place the Ac-coupled solar array then you would need to follow the factor 1.0 rule and size your inverters accordingly and for the ac-coupled array to charge the batteries you would need to have all 3 phases running. basically your victron inverters are taking the place of the grid in this scenario. the benefit of this system is you can drain a certain amount out of your batteries during peak hours that are outside of solar production or draw from batteries during the night. depending on your billing system if you get charged for high peaks you can program the system to level these out and reduce peak usages.

If you are going to replace your inverter then you could look at going with a dc-coupled 3 phase victron system sharing one set of batteries if designed correctly you could export excess power as well as run off grid and maximise your energy usage. This increases the cost of your system and would be determined by grid outages.

I appreciate the idea.

One of the items to check (see #3 above) is the ability to produce and use solar energy during a grid failure.

Perhaps the more economical path might be replacing the existing inverter with an inverter of the same brand but capable of charging a 48-volt battery.

This option would allow the usage of a backup battery as well as full use of the existing solar array during a grid failure.

My idea of using the newer inverters from SE might be invalid or perhaps not (insufficient information at this time).

I have recently received a comparison critique of this inverter which suggested that these line of SE inverters could not be used for either off grid use, backup power, or as an emergency power supply.

Some of these claims seem a little fishy to me.

Why else would the SE inverter have the ability to charge batteries?

Moreover, the critique used two batteries (LG and BYD) of which only the LG has been mentioned in a semi official capacity as being one of the batteries that will be compatible. The other possible battery is the future battery from SE.

But claiming that it has no off grid capability might be correct.

If I wanted a full off grid inverter capable of connecting to the grid, I think I would look elsewhere (Some names that come to mind are Imeon, Victron, or Sol-Ark)

Regarding the idea of using a Victron inverter / charger on one of the phases please see above. I have posted a more complete answer to this idea.

The main issue to deal with would be balancing all three phases, but it seems that Victron does not like this idea anymore (See above).

You use 3 single phase inverters, one for each phase.

On one phase you put Victron inverter/charger/battery in front of grid inverter.

When grid fails, you will have power on that one phase.

If you want to have all three phases, after grid failure, it is not possible with just one Victron.

In some instances, this would work, and it could be expensive.

The solutions I found might be slightly more economical.

This is still a tentative idea since SE has not confirmed the possibility of using other 48V batteries besides LG or SE batteries.

This might be the most optimal solution since it would still be able to use the existing installed solar panels using SE optimizers.

And perhaps, no additional expenses in battery chargers would be needed.

Initially you stated that the SE hybrid inverter is not a good choice because it supports only LG or SE batteries.

If it is not the case, of course going with SE hybrid inverter is a good decision, since you already have panels with optimizes.

I do not know what you need from this system.

Do you need a UPS type or just backup power that does not require continuity of power supply.

I do not know how SE hybrid inverter switches from AC to battery power, but Fronius needs about 30 seconds for switch over.

You are absolutely correct.

I was told initially that the SE inverter was not suitable for this usage, but shortly thereafter I received new information.

In fact, I have not been able to confirm it since SE has not released information regarding compatibility besides batteries from LG.

They have released hints that they will have a 48V battery next year, and some reporters have mentioned that other batteries will be included; however, the information is rather sketchy at the moment.

One of the reasons I could gather is due to regulations.

Not all the utilities in all the countries that SE operates permit backup power whether this be from solar panels or batteries.

Since this would be a grid tie inverter, SE is avoiding the release of a statement that might upset a utility company.

For this reason gathering information is extremely difficult, and this in turn lowers my confidence level that this system will have the capabilities required from it by the time it is released.

For instance, owners will not get any capabilities in SE products which are not approved by utilities and installers (e.g. access to detailed software parameters, energy export, or energy curtailment).

In other words, their products have more potential in some markets than what is shown.

I am curious, what was the advantage of installing SE inverter with all those optimizers?

Do you have significant shading on your panels?

Also, the way you explain the situation, I cannot shake the feeling that SE thinks they are the only company making solar inverters/systems in the world.

Yes there is still significant shading.

However, as I mentioned earlier, there are two SE devices which will allow you to use any inverter with SE optimizers.

Doesn’t every employee of a company think this of their own company?

I found an idea getting kicked around (see above) here at Victron for a while, but it was disavowed for some reason. The idea seems to have merit, and I wonder if perhaps people abused it and started implementing it incorrectly.

Scheme of the system with stabilizers and Fronius

Question regarding SOC limits - Why is the active SOC stuck at 70% ?