Till now I dind't quite succeed in having the SOC showing in console (what I think should be) correct measurements. My system has a Multi 3000/24/70-16 and 2 solar chargers, VenusGx. The discharge seems linear, from 100% going down... but the charge seems to stall and I only get to 100% after a on grid charge by the multi, and only after full absorption period.... makes a big leap from whatever stalled value it has to the 100%. In solar not even this.

So, I suspect I have incorrect values somewhere, for example in the VE Config battery monitor section: 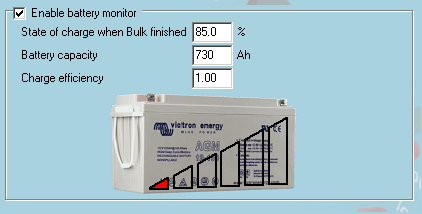 Efficiency - is this to take into account the losses on cables? Could it explain the SOC never reaching to 100% in solar?

State of charge when bulk finished, left it on default...

Since my SOC monitoring has not being very reliable, I can't use it as trigger for other functions, which I would like to do... any help appreciated.

Hi, I changed the manual slightly: labeled each option with A, B, C and-so-forth.

Yours is option B.

The problem seems to be that, when charging with solar, your SOC is capped at 85%. Or, more precisely, capped at the percentage as configured in the MultiPlus/Quattro.

Which I know is how the inverter/charger works: as long as it thinks that it’s in bulk, it will not let the SOC rise above the configured end-of-bulk percentage. Which makes sense in a way.

So, (sorry for this long story) the question is now why doesn’t the Multi recognize that the batteries are on there absorption voltage already. I’ve come across this recently, and I’ll search a bit and comment here again.

Hi, I recommend to check this chapter:

It explains all details and requirements.

Sorry, I should have said that I already read that chapter and followed all indications... I've searched everywhere. The post was a last resort...

Recapping, I have 2x Victron chargers 250/60 and Multi 3000/24/70. A VenusGX that should know every current that comes in and out of battery. No DC loads, No extra DC chargers. Settings according to the mentioned chapter: SOC Battery Monitor (selected Multiplus), 'Use solar charger current to improve VE.Bus SOC' is enabled, etc.

The oberserved behaviour is however strange. Only the discharge (it will be the Inverter input) seems correctly read. The charge from solar seems only partial, and charge by Multi is with abrupt step.

Discharge and Charge by Multi:

Charge by solar only -, doesn't get anywhere near 100%

But solar chargers went to float everyday, and if I force a charge with the Multi, the bulk and absorptio are very fast, indicating batteries were indeed nearly full.

So, I'm puzzled about this behavihour, I was hoping the settings in VE Configure were to blame...

Did you finally manage to resolve this issue? if so; did you change some parameter settings? or installing some new like a BMV? I have having a similar issue, and noted that the recommended charge efficiency factor for the BMV 700 series is 95% not the 80% that is default in the multi (https://www.victronenergy.com/blog/2017/04/13/instructional-video-how-to-optimise-the-bmv-700-series-sync-parameters/).

Hello. Not quite I'm afraid...

I did improve situation by increasing the MPPT voltage parameters by 100mV and decreasing the Multi voltage by 50mV but is not enough. I rarely go above 90%, mostly never above 88%.

In my observations the only way to get to 100% is to complete the configured absorption time without interruptions (in my case 2h).

But with my new bigger 1200Ah OPzV 2V Gel battery system this did not work well. After a few days with more or less sunshine I and the Multi had completly no idea of the true SoC anymore. According to the deep voltages, the true SoC was much less than the Multi showed.

This was the (safety) reason for me to invest in a battery monitor (BMV712). Now I am satisfied again, because I have a reliable and configurable synch point for the 100% state.

Thanks for the info.

I am having almost the same situation with the same battery type and size OPvZ 1200AH 2v cells x 24 with Quattro 48/10000/140-2x100 . And I am considering taking the same route. Seems like the best way to establish the true SoC is to use a unit specifically designed for that job. This does seem like something Victron could fix in their firmware though. If they were able to add in the extra parameters and calculators (peukert, charge detection time tail current etc to reset the SoC to 100%) that would probably solve the problem since the issue seems to be that the charge controllers know when that battery is fully charged (having done the bulk then absorption, then float) but that "fact" is not reflected in the SoC displayed. If the multi/quattro can't do it then surely the ccgx/venus gx has the compute to be able to do this.

The other similar problem I am facing, that that on another site, I have an EASYSOLAR 48/5000/70-100 - 230V-MPPT 150/100 that is showing the exact same SoC drift pattern, and that is supposed to be an appliance, so adding a BMV to that is not so straight forward.

And while in Absorption and Float??! Why not reach 100% ? This is the core of the question.

Chargers go to Float everyday, but SOC remains lower than 100%. And sometimes it is above that VEConfigure setting. In my case is default, 85%, and you see I have a day where SOC almost got to 90%.

The only way to reset the SOC to 100% is to give a charge by the Multi. In this case, bulk lasts for just some seconds, and SOC becomes 100% after some hours in absorption, even if current is almost zero throughout the whole time...

I think that you didn't read the CCGX manual!

When there are more chargers, or loads, connected to the battery than just the Multi or MPPT Solar Chargers, a dedicated Battery Monitor will be required. Examples are:

A short explanation: the VE.Bus SOC as determined by the Multi or Quattro will be incorrect in above situation. As it will not take the discharge and charge currents by those other DC Loads, and also unmonitored chargers, into account.

I DID read the manual, and read also the recommended chapter by mvader:

2.4.1 Which device should I use for SOC calculation?

Battery and Multi or Quattro (a typical backup system)

No battery monitor is required: the Multi or Quattro is the only product connected to the battery and has full control over all charge and discharge currents. Therefore it can calculate the correct SOC itself.

No battery monitor is required, as long as all MPPT Solar Chargers are Victron products and are connected to the CCGX. The CCGX will continuously read the actual charge current from all solar chargers, and send the total to the Multi (or Quattro) which then uses that information in its SOC calculations.

My MPPT are Victron AND connected to CCGX (Venus in my case).

So now what is the truth?

Your quote is not my case, my case is not "Other System Types". I have only Victron products on my system: MPPT 250/60, Venus and Multi.

Thank you very much, mvader.

Actually, I was just thinking in rising the mppt values (but not because of this) since I have some issues with voltages too. I will make a different post about that.

Your answer makes sense, I think I will connect to MPPTs and rise a little the voltage. I already confirmed some time ago the multi puts +100mV both in absorption and float than the MPPTs, and this could be the issue, maybe...

- What happens (or should happen) in this case: Discharge starts from 100% down to, say 88%. Then comes the sun, I charge via MPPT, rises slowly but never reach the 100%, even though the MPPTs entered float state. Is this consistent with your explanation? It never drops below 85%, and I was hoping it could go from 88% again to 100%, in a "more or less" linear fashion.

I feel that is a "gray" area from between 85% an 100%. That's why I posted the VE configure settings I had on first post. I did experiment changing the 85% to 90% and noticed some differences. I was also thinking changing the threshold to 99% to have even more linear monitoring (Would this make sense?). Maybe I don't fully understand the SOC "algorithm", as Victron implemented.

I think you are asking too much precision from you SOC. At least more than I can guide you with. My last two cents on this: if you do want to optimize maximally, read & experiment more. Increasing that 85% can indeed be an improvement. Depends on battery type & chemistry.

Or get a BMV, which has more parameters for tweaking.

Or just accept it; I think you’re fine (after increasing solar charger absorption setting, and verifying that they are set high enough by checking that Multi switches from bulk to absorption at the moment that you expect it to.).

In Victron battery monitor manuals they typically specify the C20 rating, so that is what I use.

There still seem to be something missing from this discussion. My problem has been the opposite - hits 100% too soon with nightly discharges down to around 87%. If I accept the default values, I'm charged before bulk ends.

I have compensated by setting as follows: 85%, C20 rate and 0.85. My MPPT and Quattro are set to identical absorption voltages, but the MPPT will typically read higher due to the installed smart sense.

There are some variables that folks are probably missing. Pb batteries should be charged at 0.1C, i.e., 100Ah battery should be charged at 10A. Once absorption voltage is hit at 0.1C, that's the end of the bulk phase. This is when the battery is actually at the prescribed 80%, 85% or whatever is standard for your particular battery.

I believe it's also important to set the CHARGE current in the CHARGER tab to your 0.1C rate. This may have nothing to do with it, but it may. In any case, I want to limit the charger to this value as it's the max permitted by my battery manufacturer. If bulk ends with the charge current lower than this, the battery monitor may be smart enough to know it's higher.

Solar charging can start at first sun, but you likely won't be charging at 0.1C for some time. What commonly happens is that absorption is reached while the charge current is less than 0.1C. If you find yourself charged before high noon, then this is probably what's happening. This means that you're finishing the bulk phase at a lower current and have essentially skipped ahead to where the absorption cycle would be at this current, i.e., your SoC is HIGHER at bulk termination due to the LOWER charge current.

The above seems to be a common occurrence on systems that are charged after only a few hours, i.e., your SoC is higher at bulk termination that it would be with 0.1C charging.

To summarize, with my Quattro configured as follows: 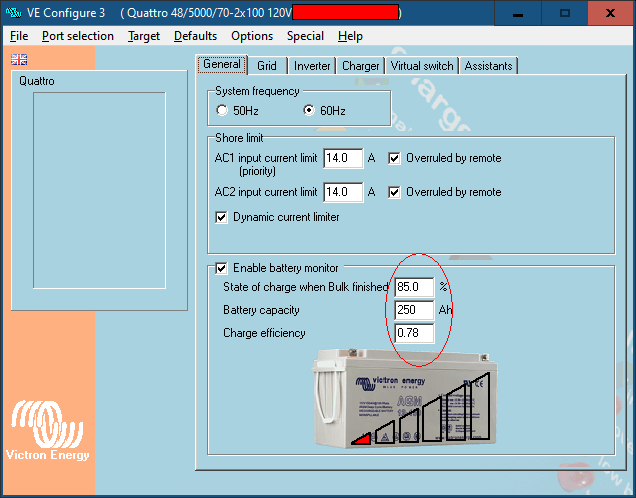 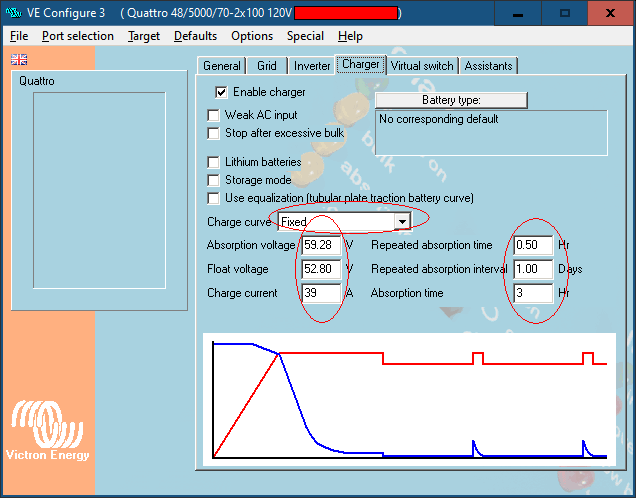 Does the Relay Assistant in a MultiPlus Compact (aka Phoenix 12/2000) continue to work after low SOC shutdown?