I set up some days ago a ESS System mit 1x Multiplus-II GX 3000, 2x Multiplus-II 3000, 8 x Pylontech 2000 USB, 1x EM24 Ethernet - it worked great without problems. The PV is installed on the AC GRID. In the past days PV was only able to charge the battery uo to 85% SOC during the day. Today sun was much better and the batterie was charged upto 92% SOC. I got four alerts from Pylon BMS that there is overvoltage. The whole system worked after those error message until this evening.

Therefore I stopped the system in the evening and set the Absorption voltage from 52.00 V down to 51.60 Volt with VE-Config. I did it of course for all three units.

After restart of the system I run in problems.

I know from this document, that this error code reads as:

Which explains my problem. But why?

After the relais have been tested the multiplus-II on phase 3 started to flash with mains-on LED green, bulk LED yellow is on, inverter on LED green is on - the display on the GX shows all the time ESS Discharge even when Remote console gives different message.

With the Remote console it shows "Passthru"

I found a lot of threads here, but I wasn't able to find a solution for my problem. I checked in the ESS documentation Q4:

Q4.2: The Pylontech batterie is visible and sending actual data and shows that there 8 batteries, because the charge current is 200A DCL

Q4.5: There was no change in the GRID code it is set for Germany from the very beginning to 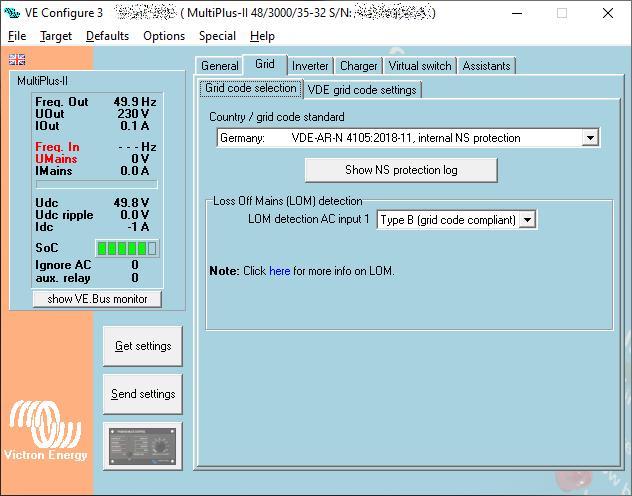 I switch all of, Pylon batteries as well, removed PLUS cable from batterie, All Pylons looks good and are running, no alert LED is on.

I setup all 3 Multiplus again with the old setup file I used before with absorption voltage at 52,00 V - it didn't help.

I redid the whole setup from very beginning - no positive result.

I set the Multiplus to factory value, I couldn't reset the grid code by not having the neccessary password, but again same problem ...

I use as ESS software the actual release candidate 2.60~15 - can it be possible that there is a software bug wich causes my problem?

I found exactly the same MOD-bus error as @jaro2k described in his thread. Could you solve your problem?

Any idea, what can be wrong? What can I do!

Any suggestion are more than welcome.

After our R&D was in touch with @DayAndNight, (thank you for all your help!!), here is the conclusion.

First of all, for passthru issues in ESS systems, always check the possible causes as documented here in the ESS manual, FAQ, Q4. But in this case there was another problem. Two solutions:

1) there is some, very unlikely to happen, edge case, which relates to a setting in the Multi that causes the Multi to be stuck in passthru. To get out of that, connect with VEConfigure using an MK3-USB (or MK2USB, but not with Remote VEConfigure) and open the Phoenix Multi Control panel which is a feature inside VEConfigure, and set an input current limit other than 0A. Close it again, and problem will be solved.

To be honest, we are not entirely sure how it can have ended up in this state initially.

2) we'll soon release a new VE.Bus firmware update that will solve the issue.

I wanted to thank you an the R&D team for the great and fast support. It was very professional and very helpful. I learnt a lot. Up to this I didn't know something about a Phoenix Multi Control. Shame on me! ;-)

Here is a screenshot how to get to the Phoenix Multi Control Panel, in case somebody is looking for it. 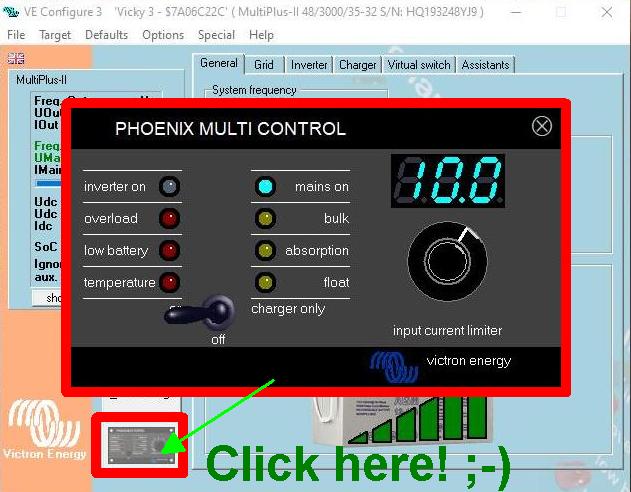 Thanks again to the whole team of Victron and kind regards from Munich!

I have a similar problem, my Multiplus II GX is stuck in passthru. I have excluded all the possibilities in FAQ #4 and don't know what to try next. Has this issue been solved in the VE.Bus firmware or could it affect my unit still? I don't have a mk-3 cable but will order one if it can help solving this problem.

@DayAndNight May I suggest you revert back to the release software version and see if that works? Also, maybe lower the charge current on the inverters as the recommended charge/discharge is 25A for these batteries.

thank you for your feedback. Yes I tried already some time ago, but wasn't sure today what realy happened. So I just did it again and went to the release version 2.53 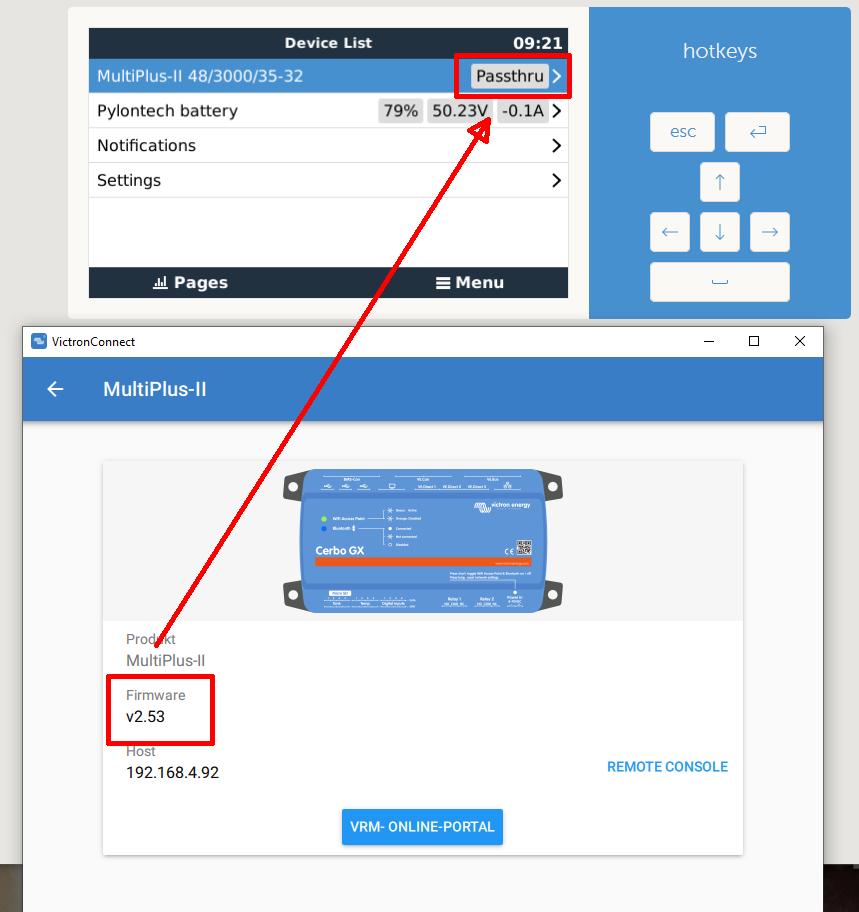 But it didn't help. The ESS system ist still in Passthru.

The batterie is now in "idle" because there is no more access to the ethernet based gridmeter.

It is realy painful. No idea and no strategy. I feel I went 1000 times thru all documents, webpages and discussions.

Thank you again for your suggestion! Hopefully you or anybody else has an idea what I can do.

Kind regards from a wonderful spring day here in Munich.

Hello @DayAndNight, this issue could be related to a v2.60 problem. We'll look into it and be in touch with you on email. Thank you!

Hi @DayAndNight I can only imagine your frustration, but it looks like you have the right people looking into it. Likely a comms error as I do also recall the last firmware was addressing some pylontech points.

I knew what can happened when it is necessary to use brand new software version and as in this case a release candidate which is a preliminary version. I think I have here possibly two different problems or better effects. One of them is, that the eight Pylontech batteries are brand new and doesn't have the exact same SOC.I was aware that different SOC has to be balanced, but during the first steps to balance them I run into the above described problem. So as often who is the mother of the problem? ;-)

I was contacted already on Sunday directly from Victron, which is a great and super fast response time, thanks to the great Victron team and they will soon work on my problem.

Meanwhile I found in this forum a thread which helped me to work better on balancing the Pylontech batteries bank and seven of the eight units seems to be now at the same SOC level = 6 LEDs steady on and as always in life: one bad guy ;-) which needs still some extra handling / balancing with 4 LEDs on | 5th LED flashing. My challenge without ESS running is to "burn" energy with now only low loads available on AC-OUT to come down at SOC over all to restart loading again the batteries for doing again some balancing. By the way I do it like this, set ESS-mode to keep batteries charged and control manually the charge limit to a very low current from 1 to 10 A only. Hopefully in the next loading stint I will have eight well balanced units with out or nearly no "over voltage alarms".. I will later report here.

Thanks for your anticipation - DayAndNight

thank you for your idea. Communication cables are very often the beginning of problems. I checked it already. I think we have different versions of the EM24. My EM24 is the version with Ethernet socket. It is very new (spring 2020) that it can be used with Victron ESS.

Thanks and kind regards - DayAndNight

Generation of surplus with the grid, Anti-island protection Quattro.