In all instances the load would have been around 200 to 400 W maximum. There were no events other than the reaching of 100% state of charge that I can think could have triggered the shutdown.

Before the AC power returned this evening I checked the history in the BMV-702. It displayed the lowest battery voltage as 0.01 V. I cleared the history, then watched as the charge approached 100% this evening. It reached 100% and the fan in the inverter turned off, but AC out seemed to be normal. The voltage of the batteries was about 27.6 V and continued to climb to about 28.6 V, after which it dropped again to about 28.4 V I think. I can't be absolutely sure about these figures. Then after a minute or two the inverter cut off completely, as it had the previous two nights. There were no lights on, and no AC output. I switched it off and on again, and normal AC output returned. I checked the BMV-702 history, and it showed the lowest battery voltage as 26.3 V.

As I was typing this it cut off again. State of charge was 100%, battery voltage was as above, about 27.6 V and climbing up to 28.6 V, then dropping to around 28.4 V and staying there. As previously I switched it off and on again and normal functioning seems to have resumed.

I had my Victron dealer set up the inverter through VEConfigure (I don’t have the MKIII to USB cable). The batteries are two Blue Nova BN13V-108-1.4k LiFePO4 in series. They have an internal BMS. Their manual says the bulk and absorption voltages should be 14.2 V, and the float voltage 13.6 V. As far as I know this is what my dealer set in the configuration. They sold me these batteries, so they are familiar with them.

My system wiring is as in the diagram below, though I haven’t connected the solar panels yet.

I’d appreciate any insights into what the issue could be, or what else to try to diagnose it. 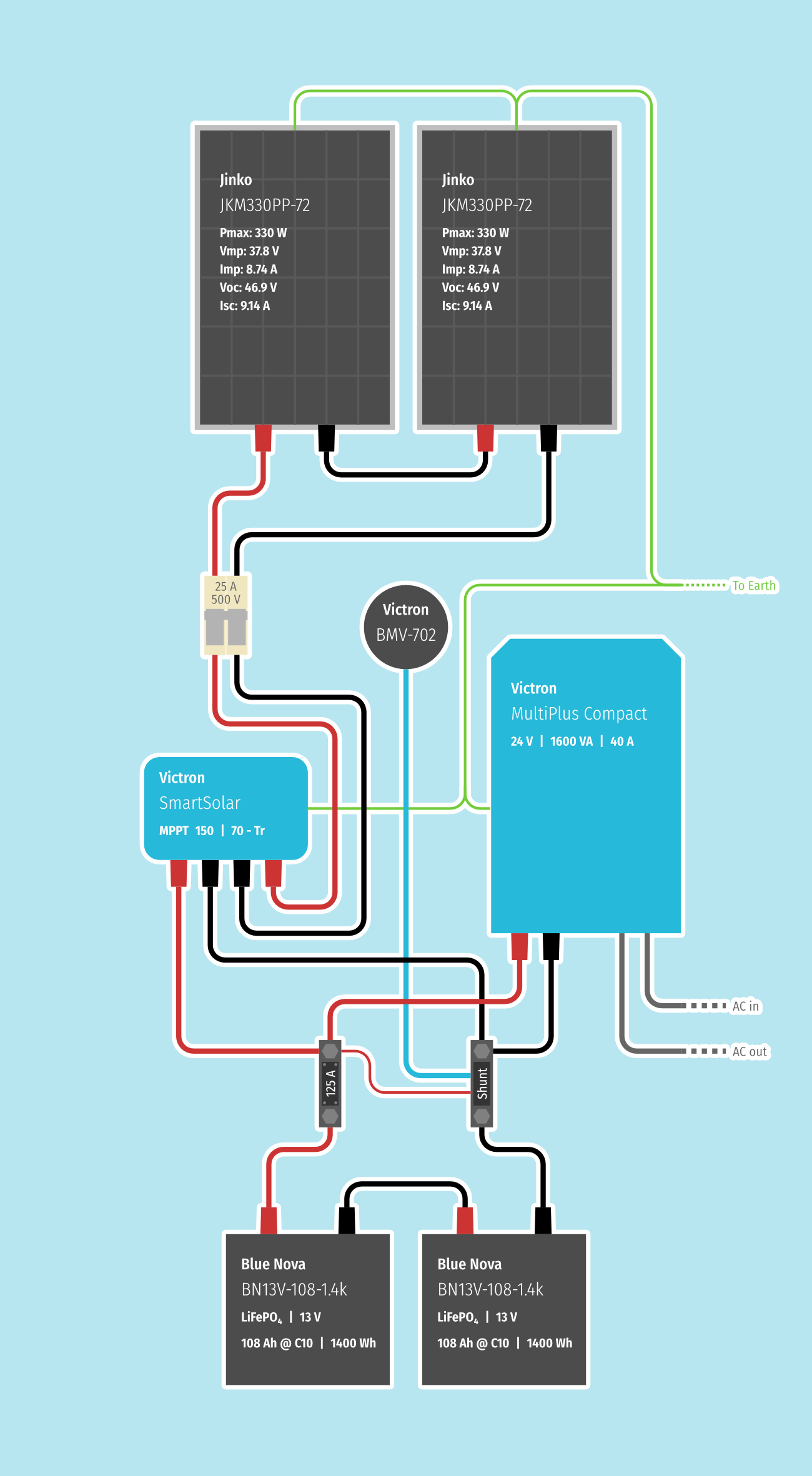 Your batteries are protecting themselves because they are charged too high, the batteries disconnect, and the inverter detects an issue and shuts down.

The solution is to configure the charge (and discharge) voltages correctly, to do this the MK3-usb cable is the most flexible, or ask the dealer / installer to fix things.

Thank you Daniël. When we saw the first instance of the lowest voltage being 0.01 V that’s what we thought too – that the internal BMS was shutting the batteries off. But after it showed 26.3 V for the lowest voltage last night I wondered if that could still be the explanation?

I’ll see if I can borrow the cable or take it back to the dealer to help check and correct the voltages. It’s frustrating not being able to double check myself.

it works both ways, when battery is empty it will also disconnect.

OK. So if the batteries disconnect it won’t necessarily cause a 0 V reading on the BMV?

if it disconnects due to low voltage: yes this can happen.

It may be a stupid question, I just don't see anywhere on the website or available tech specs that either confirms or denies their ability to handle series connection, although I do note that their "standard range" are available in 13, 26, 39, and 52v versions, which makes me suspect that each has a differently programmed BMS... which, since your battery model is specifically listed as a 13v model, makes me highly question whether or not it's actually suitable for series connection.

Gosh, I hadn’t even considered that. I wasn’t aware that could be an issue. I did show my plan to the dealer who sold me the batteries, and they didn’t seem to think it would be a problem.

Oh, I remembered that there’s a sticker on the boxes that gives some information. It reads:

Please connect battery with same group No. only.

• In series and parallel: Please contact the supplier for advice.

Please fully charge each battery before connecting in series or parallel.

It might be worth noting that the two batteries I have are not from the same group number. I raised this with the dealer when I bought them, and they said they sell them individually and can’t always pair them up, and that it wouldn’t be a problem. The batteries also haven’t been charged individually since I bought them, only together in my setup above.

Hmmmm odd that it would say in series is fine but in parallel check with the supplier... I'd think that'd be reversed... But in any case, it appears that my thought isn't the problem. Not sure about the group being different; I wouldn't think that'd be a particular issue unless a different group has different parameters in its BMS.

It's seeming like a BMS issue any which way you look at it though, rather than a MultiPlus issue... have you contacted the distributor's tech support about all this?

Thanks @Daniël Boekel (Victron Energy Staff) and @Justin Cook for your input. Just a quick update for you and anyone else following:

For various reasons I haven’t been able to get access to a MK3-USB cable or take the components back to the dealer yet. However, since my last post on the 10th of October I haven’t experienced the problem again. The system seems to be working normally.

I have also tested with the solar panels connected and charging, and although I haven’t had high input from them yet that part of the system also seems to be working fine.

I’m wondering if it’s possible that the two batteries were not balanced when they were first installed, and one of them might have been getting to a high voltage and cutting off, and now that they’ve been through several partial discharge and charge cycles they have equalised. Does that sound like a plausible explanation?

I will keep trying to access a MK3-USB cable to verify the settings on the inverter, and if I experience the problem again will certainly be in touch with the dealer.

"I’m wondering if it’s possible that the two batteries were not balanced when they were first installed, "