- both in Absorption mode

However, with both systems the battery voltage went up as far as 58 V, triggering Alarms which cleared after about 3 hours, when voltage went back dropped back to around 55V.

What could be the cause of this?

Follow up on this issue - today we experienced extreme spikes on DC voltage, over 60 V, with a max peak over 66V. See below. Any feedback would be much appreciated !

Hi Peter, did you upgrade the firmware to the latest version?

if so, can you send your VRM installation number?

Hi, I have the same problem, but in my case it is a Fronius connected on the output of Multiplus. It seems the problem happen when grid is off, the battery is full and Fronius has a big production. In my case it was "High DC ripple" and two times the voltage on Multiplus output has a spike up to 323VAC(nominal is 230VAC)

Hello, I see the batteries are BYD. Sorry I had not caught this case before.

If the communication is correct the BMU will make sure the voltage range is respected and if due to an anomaly this is not respected, the batteries will shut down once the maximum cell voltage is reached. Therefore, could you first help confirm you are seeing the BBox in the device list and that the BMU LED is solid green?

Please note that if the BMU is bypassed or DVCC deactivated, this would void the warranty.

i can confirm BMU LED is solid green and BBox in device list. DVCC is enabled.
Update on situation - high voltage isssue has not happened since last week. 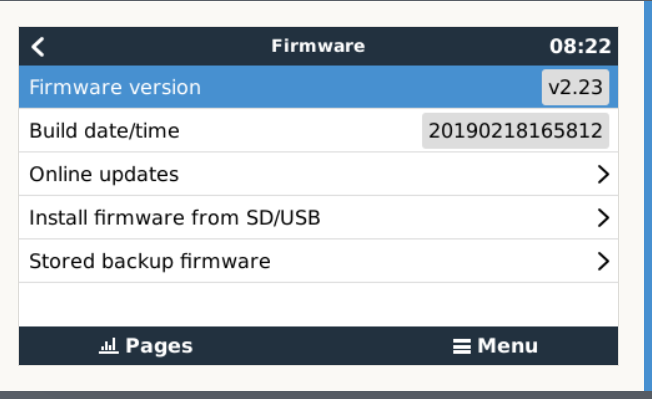 Hi Peter, Have done some more testing today and found the below on my system

TRY this if you are still having your issue, and see if it gets you back and going, yes its work around , and NOT a full solution, but it worked for me for the time being.

if you are using a VE BMS and it has got a High voltage trigger and the red light is on on the unit, this also maybe occurring with other BMS triggers as well but I cant test for that.

1. the Venus device may/will loose its Ethernet connection. only way to connect is with the inbuilt wifi

2. the General Flag control will not work, ie you cant turn it of or off

3. the Inverter will not reconnect to the mains until the over voltage trigger on the VE BMS is removed or the gen Flag is removed

Hi Peter, I cant see any reason jumping out at me.

however the system in my opinion is missing some installed items as the Victron inverter is not getting info or being told stop charging or to stop loads in a battery fault occurs.

again in preferance you should be on 459 firmware, but I dont think that will make much diferance

I notice in your drawing that there is no VE.BMS that controls the inverter connected.

IE if some cells in the battery go high when balancing this may trigger the battery or batteries BMS to disconnect them,

thus the inverter is then open circit and thus showing a spick in its voltage as there are NO batteries connected.

you should have a VE bms connected so that charging from the inverter is TURNED off before the batteries disconect.

currently your diagram shows that only a venus is connected for monitoring but there is NO control of the multi at all.

apologies for the late reply. Unfortunatley i do not quite understand your comment.

About the BMS - we do have a B.Box BYD BMU installed controlling the batteries. Which device do you miss in our configuration?

thanks again for following up. Regarding your queries:

1. About BMS disconnecting the batteries . Don't know how we can check this - we do not experience communication errors, neither on BMU nor on batteries.

2. Voltage sensing - we use the standard BYD 2.5 batteries + BMU, which have no additional/exterior voltage sensing.

5. We can indeed try. However, we're using the settings as advised by Victron, float 55.V vs absorption 55.2V (see https://www.victronenergy.com/live/battery_compatibility:byd_b-box)

Also good to mention that the systems never get out of absorption mode, even once fully charged they stay in absorption.

6. PV - we do not have a PV inverter connected on the output of the battery.
The battery can be charged from either the grid or PV. See diagram. In case of any surplus PV power this can be fed to the grid. 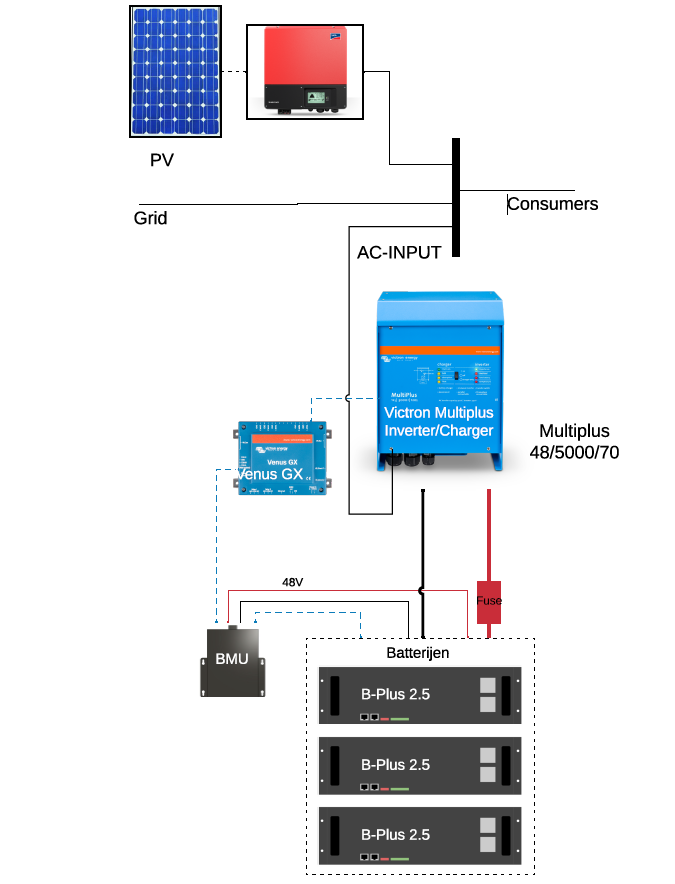 Hope this helps to be more specific.

Please first update to the latest firmware, if you still have problems please report back.
I'm assuming you have all settings like stated here:
https://www.victronenergy.com/live/battery_compatibility:byd_b-box

DVCC settings and SVS settings have indeed been done.
We will update to the latest firmware. However, would be good to know if firmware updates since 2624433 include any bugfixes/improvements that would solve our issue?

1. Maybe the BMS you are using is disconnecting the batteries ???

2. what voltage sensing connections are you using, ie are they connected directly to the batteries and NOT to the inverter battery connections.

3. is the voltage high at low or high amps

4. could you send a detailed wiring diagram

5. also try reducing you float voltage by 1 volt as it seems very close to the absorption voltage ( this is a test suggestion ONLY to see if as they are so close that this somehow is causing a issue )

6. another thing you have not mentioned have you PV grid tie connect, if so are they shutting down on freq shift as if they are NOT and are still producing and the power used is less than there output then the inverters have no ware to put it so they dump it to the batteries (also presuming no grid connected here).

7. Again a FULL detailed system diagram, helps as the above are only guesses

8. ****Added this part this morning ****This is a try only if you have dvcc enabled in the Venus GX Disable it and see if this stops the issue.

Yesterday I had a simillar issue on a site and am still trying to find out why but the only change on the site before this was to add a BMV700 and then to turn ON DVCC then I seemed to have a high battery voltage when the batteries were full and my alarms went off as well.

I have so far NOT isolated the issue. but will be doing so over the weekend.

the VRM graph below for referance only ,The red one is the one of concern as the BMS would have given a shutdown to the VE BMS unit that would have then shut the charge down in the Inverter but the volts crept rising as per the graph. the one in blue is also of interest but this was before Iput the BMV in and it was also when I physically disconected the batteries as well, anyway more testing this weekend . 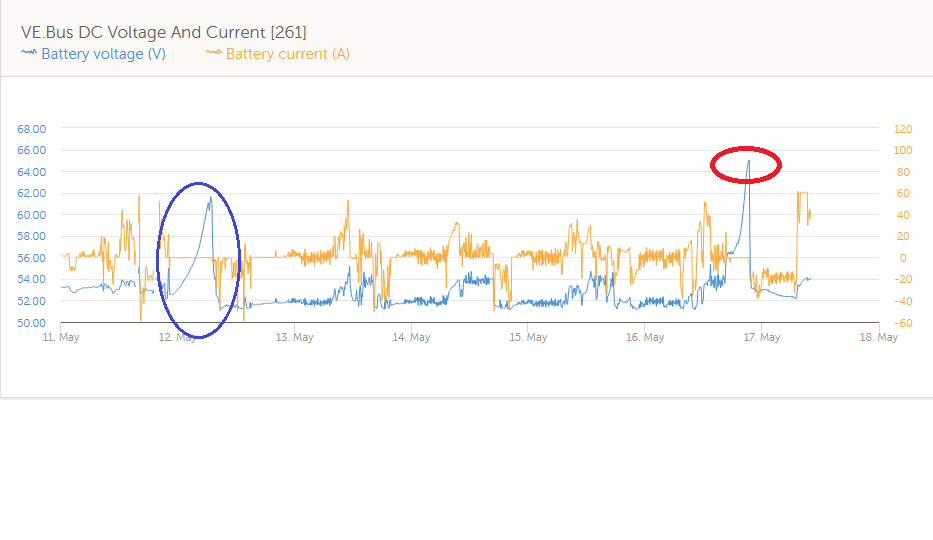 thanks for your reply.

Indeed, the multies are the only items charging the batteries.

Both units have the latest firmware and the same settings.

We use one single config file for all our systems. See screenshots for inverter and charger settings. 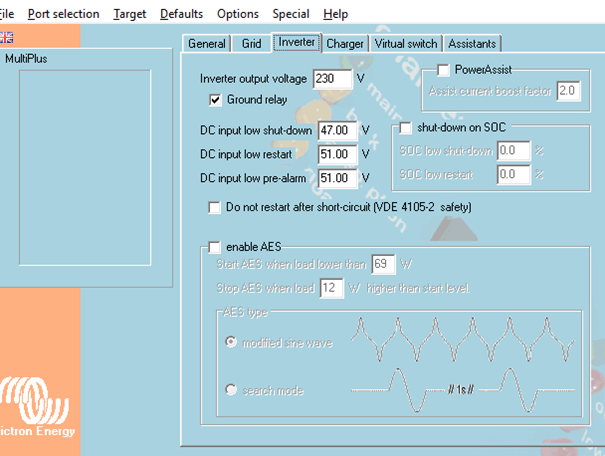 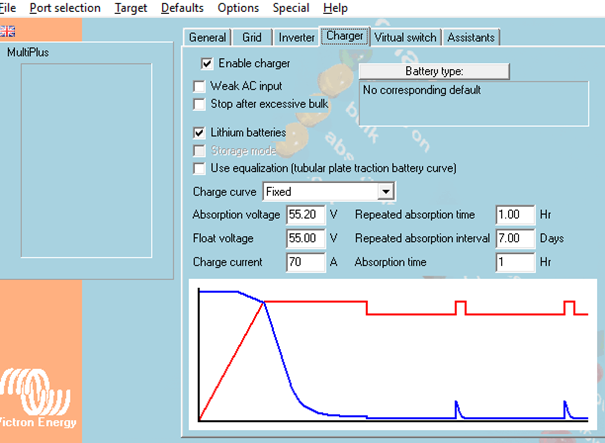 What kind of batteries are you using? (model / brand)

Are the 2 multies the ONLY items charging the batteries and could you please post the ve config settings that are applied ie a screen picture would help.

also are the units on the latest firmware if not please upgrade and retest.

PV rapidly fluctuates between 1 and 130w in Bulk - Battery voltage spikes to 14.65 then drops.

How to determine absorption/float/equalisation voltage