Just looking at getting my ESS project underway and obviously want to get started asap. Just a quick question. The recommended battery for the 48/5000 is 200 to 800 amp. I believe the US5000 is only 100amp but it does meet the requirement for surge current when starting up. Therefore, is it ok to or did anyone else start with just 1 * US5000 on this inverter and build the system up by adding another battery approx. 3 months later. Solar generation is going to reduce in the UK shortly so the single 4.8kw battery would be enough for take the excess solar until the spring

It is the rated capacity for lead acid systems.

You will need 2x 5000 Pylontec to match the nominal current of the inverter.

The Pylon US5000 is a bit short of that. You will see an alarm anyway. So if you want the lifespan advertised get 2. (And less issues).

So if you see a better deal on other battery makes, check both nominal and peak ratings.

Juha Tuomala commented · Aug 04 at 11:07 AM
That only applies if you run your inverter with its nominal maximum rate which probably is not happening in the most sites. Those are nominal values and useful if you want to design the system based on those. Real use is less and can be good place to save money to get started.
0 Likes 0 ·

The batteries need to supply the full inverter cuurent in case of fault conditons. Then the inverter can shut down. You do not size a battery for loads only.

It must first be able to supply the inverter fully, then if more is needed to cover energy needs for storage that is added. If not then your system is safe.

Otherwise you are asking for a fire.

Simon-jukes has the correct approach. Wait, buy another battery and then install and use the system.

Juha Tuomala Alexandra ♦ commented · Aug 04 at 11:24 AM
If inverter shuts down, it switches to the grid. Your fires start when you use too small cables or too big fuses.
1 Like 1 ·

simon-jukes Juha Tuomala commented · Aug 04 at 11:33 AM
For info, I am planning to only 2 batteries on each pair of Pylontech cables. 2 pairs of cables once 4 batteries in place. Each pair of batteries, fused by 160 amp NH00 fuses in a 2pole DC fused disconnect. 70mm cables from the Power in to the inverter (0.5m max length)
0 Likes 0 ·

I am happy to reduce the maximum rate if it means I can get started sooner, giving so much solar away at the moment and they buying back from the gird at night

That's what I did. Having the inverter online already has helped me to cut down my consumption and eletric bill by half when it helps to understand the consumption. And I haven't put all my loads behind the inverter yet. With these rates one can speed up aquiring more battery that way.

I dont think you fully understand. If a fault developes in the system (electrical or anywhere else it is not safe). The inverter will not be able to shut down and will literally power a fire.

You can use the energy meter from the grid provider to work out energy consumption. So that part is not difficult.

Alexandra ♦ Alexandra ♦ commented · Aug 04 at 11:27 AM
Not to mention when you do add a second battery the first ones state of health will compromise the second one. They become badly mismatched if cycled.
1 Like 1 ·

So in your theory, people who first purchased two batteries as adviced, but later on want to add capacity and purchase two more, "will compromise" the first ones and maybe start a fire.

Regardless that youtube is full of people doing exactly so. With Victron and Pylontech.

You're saying, if a Victron inverter doesn't get enough current from the batteries, it will start a fire.

Good luck in getting them to confirm your accusation.

I have seen and attended to systems and people's houses that have caught on fire frompoor installation practices.

Wiring catches on fire, it happens. I did not say the inverter catches on fire. All safety equipment (fusing breakers etc) is designed to prevent current from systems sustaining fires in the wiring. Part of that prevention is a system that can shutdown.

It is not a joke and it does happen.

I gave the warning. If you choose to continue, that is up to you.

Batteries age calendar and cycle wise. Also up to you to mix them if you want to. End of the day it is your money. I have no probem with that.

And Youtubers are are the source of all wisdom. Never mind actual people with qualifications. Or the battery designers themselves.

Just because it works does not make it right.

We disagreed how the fire starts from Victron inverter shutting down when it doesn't get enough current. Nothing else.

I'm thinking the same thing as Simon-Jukes, and I agree with Juha Tuomala (terve Juha) that the system can be sized to begin with using configuration, that is also my plan because the costs of making the whole system in one go are prohibitive. The alternative would be to waste money by purchasing a smaller inverter, and then swapping it out later on. Like Juha, the savings could be realised sooner even with some challenges.

Alexandra raises a really important issue tho, what happens in a fault condition.

Thinking about this carefully, I would say "that is what fuses and breakers are for, sized to protect the system in it's current state".

So why not use a suitably sized DC slow fuse, rated for use in this scenario. Set the inverter limits appropriately to the one US5000 battery, with sensible DOD and SOC settings to help preserve the life of the battery as far as possible., and then when the next battery is added, change that fuse to match the new current state of the system.

Do the same with the AC circuit breaker - put in one which is rated lower, according the settings configured. This is far less expensive to change than the whole inverter, and less expensive than the second US5000.

that way - fault condition - system is prevented from causing a fire. Worst case you kill your inverter. A slow fuse will happily work at the continuous rating of the battery and will handle the instantaneous peaks which could be higher, but will go open circuit under sustained loads. A 70A fuse Littelfuse_BF1_58V_Datasheet-523203.pdf (mouser.co.uk) is where I would start my investigation.

Alexandra - I'd be interested in your further thoughts. Thanks everyone who is contributing to the discussion!

simon-jukes l81ker commented · Aug 08 at 06:38 PM
Another addition to this in regards to fuses (DC). The new US5000B batteries have DC breakers built in, so the need to indiviually fuse each battery is not required, I am planning to just have one fuse at the DC input to the inverter @ 200amp as per recommendation in the spec sheet
1 Like 1 ·

Interesting thought, that would work with the configuration to limit things under normal condx, and the breaker would *probably* operate under an inverter fault condition. I haven't found many places with a price for those yet, or seen a spec sheet showing the breaker info. The few places I have seen want another £300 or so for the B version.

Spec of the breaker

ON: power terminals connect with battery.

OFF: power terminals disconnect with battery.

The main load on my inverter is going to be the EV charger, which i can set the maximum charge rate

My Quattro II in ESS mode can also limit the inverted power so you can virtually "downsize" your inverter from nominal 5000w rate if you like.

Can i ask, what size fuses are you using on your batteries, i was thinking 160amp per pair of US5000 batteries but down sizing to 100 amp for a single battery?

Juha Tuomala simon-jukes commented · Aug 04 at 11:54 AM
It depends on your battery type and what your powers are.

if your charging power is 2500W, divide it with voltage (48V) and you get your current. Most likely your discharge will be biggest current.

Also note that there is a Power Assist feature, if activated the system can output bigger AC currents that your grid can. You have to have matching wires and fuses there too.

Juha Tuomala simon-jukes commented · Aug 04 at 12:04 PM
Fuses and wires are not that expensive, I highly recommend that you don't save on those as they're more likely to remain as is, nothing is more permanent than temporary. Also you wont get refunded from used materials.

Changing your system over your rated currents in wires is a fire hazard and can happen easier.

Remember, it is you who eventually is responsible of your installation and what it causes to materia and people, including yourself.

If you're not completely certain what you're doing, ask electrician. At least check your results.

I have an electrician doing the grid side of things, he says the 10mm T&E is circa 9kw so well over the 5kw max of the inverter so that side all good

But he never done any ESS work before hence I was seeking advice on the battery side of things. I am planning to make sure all the DC side cables are over rated and use no more than 2 batteries on each pair of cables going to the victron power in and then 70mm (0.5 meter) from the power in to the inverter.

Thanks for all your advice

I am going to be using 10mm T&E from a 40amp breaker from the grid, and 10mm on a 40 amp breaker the the EV charger so that side of things is covered.

simon-jukes sharpener commented · Aug 05 at 05:41 PM
Thanks for the info, I will pass to my sparky for him to install a 50 instead of a 40amp MCB

I have decided on the Pylonteck, but, if I do change, I will double check the inverter peak

Thanks for the info

The UP5000 has a recommended continuous discharge of 50A, you will need more than 2 for a 5kVA inverter. 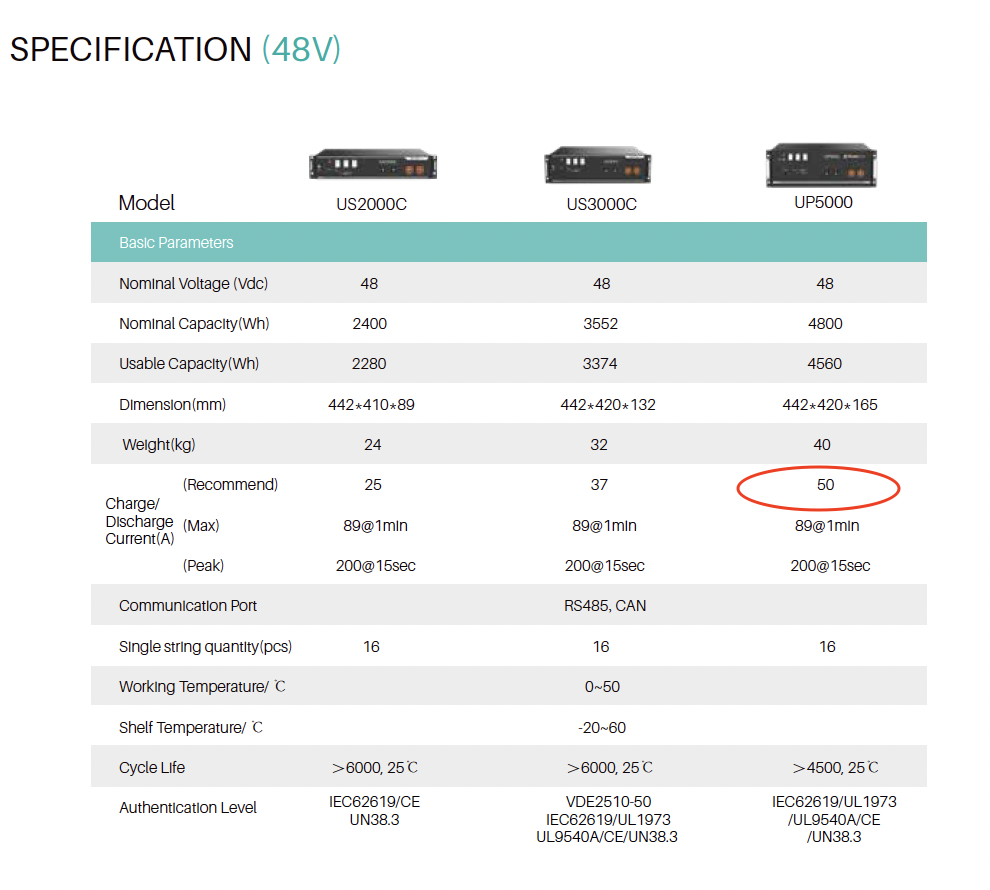 I am holding off until I have the initial 2 batteries, aiming for 4 eventually

Juha Tuomala simon-jukes commented · Aug 04 at 11:08 AM
Do your calculation what you consume. Constant 5000 watts is a lot of power for residental use. Maybe some washing dryer consumes that much?
0 Likes 0 ·

I have an EV, so the excess usage on top of approx. .5 kw is intended towards charging the car. the Zappi charger can be set to only charge if a % of battery / solar is available. If not for this I would have gone for the smaller inverter

Thanks again for your feedback

The latest spec sheet rates the battery at 80A continuous use (*temperature dependent) so that changes things a little compared with the original launch spec.

Original can be found on Pylon Tech's own website here https://en.pylontech.com.cn/pro_detail.aspx?id=134&cid=23 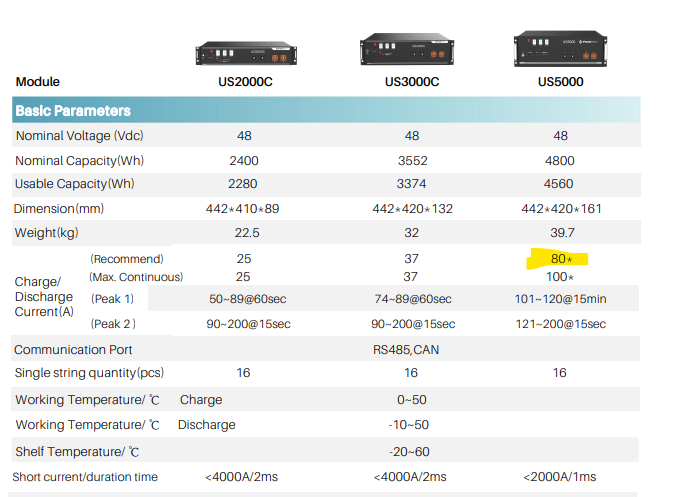 I've seen the 80amp with 100amp max, this is pushing me towards using a 100 amp NH00 fuse in a fused isolator so it will also be a disconnector when powering down

71 People are following this question.

Guidance on Multiplus II 3000 fuse and wire for Pylontech batteries

Multiplus starts charging from grid when SoC limit is reached