Hi to all the LFP lovers in here!

So I have been looking into this, but would like to get opinions and gain further knowledge about what may be viable for my application.

I would like to install a LFP battery into my hovercraft, if possible. Currently the craft has a single 65Ah FLA. The weight saving of LFP would be an obvious, and welcome benefit. Of advantage too, would be the ability to take the battery to a lower DoD compared to the FLA, for when the engine is not running but power is being consumed for accessories (VHF / music!) etc. I would like to avoid the extra weight / complexity of an additional starter battery.

1) Cranking current
The overall power drawn to start the engine I have consistently measured at no more than 202 amps. I understand it is inadvisable to regularly draw very large currents from lfp cells, which can degrade them over time, also assuming the BMS will allow it. However I see batteries of say 100Ah available now which are specified and able to supply a continuous discharge of 200 amps, with much higher discharge currents for a limited time. I see for example, the Victron LFP- Smart 12,8/100 has a maximum continuous discharge current of 200 amps. In my application, 202 amps would mostly (hopefully) be a matter of a couple of seconds. I would likely carry a lithium jump starter for backup.

2) Alternator suitability
The current alternator is a Bosch 85A unit with internal regulator. I am happy to replace this with a more suitable alternative + associated regulator / controller.

3) Voltage spike / load dump
I’ve read much about this, and the varying solutions (Sterling APD / TVS diodes). Main concerns appear to be from sailboat owners, where ancillary current draw is low? In my application, with the engine running, the absolute minimum current draw is 12 amps (fuel pump, ignition, ECM, instruments). So if the BMS decides enough is enough, would the resulting jump from whatever the battery was consuming down to 12A still cause an associated spike of concern?

4) Location
The battery in my application would be mounted inside the cabin, negating excessive heat issues associated with an engine compartment installation. I also have no plans (or desire) to run the craft in sub-zero temperatures! ❄️

Any thoughts and other considerations most welcome! 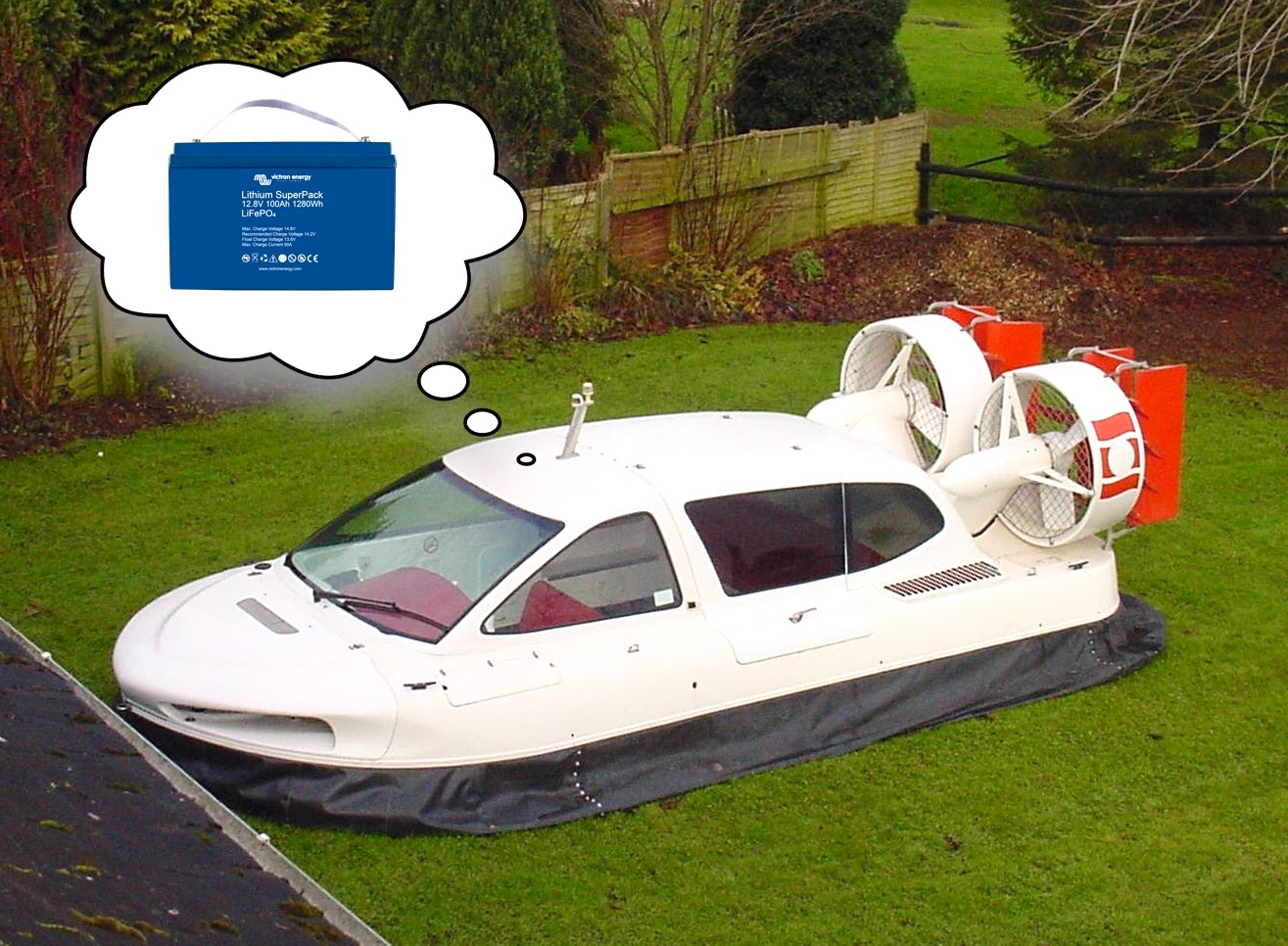 All credit to the visionary designer who is sadly no longer with us (RIP Ross McLeod). It was built for use as an Ambulance in Australia, a role for which it was not really suited. I imported it into the UK and am currently refurbishing it. I love Victron products - already have a Victron 30A mains charger ready to install, and plan to include a Victron MPPT, and a Victron SmartShunt. Could this be the first hovercraft with a comprehensive Victron Implementation?! Maybe Victron would like to sponsor it lol?!

It would be great if I could incorporate a Victron LFP with the obvious benefits. But there are many things to consider!

Success with the design. Please do note that design questions, such as yours, are often a bit difficult on Community. The format doesn’t lend itself well to help with that, and often there is not one answer. You are basically asking for a full system design. Very specific questions work better.

And you might consider contacting an experienced dealer/installer in the UK.

Anyway, enjoy and success with the design! Matthijs

I guess my main question is whether it is possible to implement a LFP to replace the FLA in my specific application. Alas that one question generates many considerations, as often seems to be the case with LFP!
I will continue to research & take advice from those with experience & knowledge.

mvader (Victron Energy) ♦♦ machineage · Jan 08 at 02:30 PM
For a single battery, consider a “drop-in”, which doesn’t has external BMS. The two thing I don’t know by heart is how to then handle an Alternator. The load dump is really something to consider, as is the risk of overloading the alternator - see our youtube movie about how to not blow-up an alternator.

and the other thing is if a lithium drop-in will be able to crank that engine without shutting down on overload.

Lastly, the current Victron generation of drop-ins, the Superpack, has a relatively low spec of max current.

I would like to avoid the extra weight / complexity of an additional starter battery.

I don't think this is feasible. Basically you want the starter battery to be always full. In your case you can't even get out and push. :)

seb71 machineage · Jan 08 at 08:58 PM
I understood that. But I don't think it was intended to be used to power lots of other systems while the engine is not running.
Share ·
2 Answers

IMHO Victron batteries are VERY expensive, and you're paying for features you don't need in this application.

There are LFP starter batteries, and you would likely get better value and performance with a targeted solution.

Help, my SmartLithium doesn't allow me to discharge, says voltage is too low.