After updating the firmware on my 3 SmartSolar 150/35 devices from 1.51 I have been experiencing issues where the PV power drops close to zero. In some instances the situation rectifies itself other times I need to disable/enable via the VictronConnect app. I saw there was an issue with the 1.53 firmware and hoped the 1.54 firmware would rectify the situation but unfortunately the issue still persists. Today device 260 was off for 2 hours before I disabled/enabled it via the app.

Is Victron aware that some devices still have this "drop out "issue even with the 1.54 firmware?

Not as yet. Victron is testing beta firmware on the devices. Yesterday there were two different firmware versions running. The one MPPT still drops out periodically.

It took a while, but I’m happy I’m here now to share the good news:

Today we released mppt firmware v1.56, which fixes above issue.

- Improve battery life algorithm by not allowing the voltage offset to decrease too fast to zero during a cloudy day.

- Change total input power data handling to allow report when charger is off. This is to prepare for trends.

- Improve fixing load output introduced on v1.54. There were still some rare cases that the load output could briefly turn off. This latest version fixes that.

- Fix overcurrent fast software detection on the SmartSolar 150/35. That caused the charger to get “stuck” on a low power output which was only reset when the charger stopped charging.

The new fw files are on Vicprof, and its dropbox, as well as in the VRM remote fw update system already.

A new VictronConnect release that auto/mandatory installs this is due for release next week.

For a system on VRM, easily install it already now using the Remote FW update feature.

For other systems, either wait for next week - update is most simple then. Or do it now using the “self supplied” fw feature:


Thank you all for your patience and help in fixing this. It was not an easy one!

have a good night, Matthijs

I've sent you an email, so we can try an older firmware to see if this helps.

I have a feeling my problem could be that the charge controller seems to only want to use PV to charge the battery, and not supply power for my ac circuits - that is why it may be a configuration problem on my side.

Hey guys, I'm having the same issue with the 150/35 MPPT. It's brand new and it locked up 3 times in the last week. It shows the battery voltage correct and also the PV voltage but only outputs 0.1A in full sun. When I open the PV voltage fuses, it still shows DC up to 140V but no actual throughput.
I have to disconnect PV and battery and wait until it turns off, then restart everything and it works again.
Running v1.54 as well. So is this a known bug?

Victron ran a number of different firmware versions on my 150/35 MPPT including a version with additional logging after which they contacted me with the offer to replace the devices with the 150/45 MPPT. Since replacing the devices I have not experienced the issue again

Thank you for your message and information. I've now logged a ticket with the supplier of the charge controller.

Hi. I've found that if I put a fan on my MPPT to get some airflow over it, the problem vanishes. Try it. It might be the same issue. Every morning I put a pedestal fan next to mine and have no issues. As soon as I switch the fan off, I get the first shutdown within 20min.

I am currently communicating with my supplier to see what solution we can agree to.

Last week, I had only cloudy weather and the controllers stayed relatively cool, so not much heat generated and I still had the issue. I had it also once in the afternoon when the sun was already on the other side of the roof. Solarpanels idling with 200-300W then.

And if heat is the problem, Victron has got a design problem here and need to integrate a fan.

Same here. The amount of sun does not seem to be the issue. All I know is that with the fan, no issue. Without the fan the shutdowns starts within 20min.

I tested the temp readings around the controller one day. The one day it was around 32 deg Celsius ambient and directly above the smarsolar's heatsink it tested 39.7. This was not long before a shutdown occurred.

The spec sheet reads "maximum operating temperature 40deg celsius" Can it be that the firmware shuts the unit down when internal temps go above 40deg? This would make sense and could be a simple programming error.

Over the weekend I mounted my Smartsolar on a piece of 5mm Aluminium sheet I had laying around. You can clearly feel the aluminium heating up so it definitely helps dissipate heat. The problem still exists but only for about 7min at a time and nothing longer so I would say it definitely temp related.

Best of luck. Hope you get your's sorted. Get some air flow on your's to test. It would be interesting to know if the results are the same.

Thanks for the update. I have measured over 42° on top of the inverter connected to only 1.2kW of solar and it worked fine the whole day long. On other days, there was only 300W solar been produced and it locked.
I sometimes have already 38° inside my garage but I will install 4 fans now in this area where the controller sits. It is working OK for the last 3 days without any problems. It's so random...

The manual actually says operation temperature from -30 to +60°C and full rated output up to 40°C. So, I'm expecting the unit to be doing exactly that. If it limits the power output if it's hot, that's fine but it should not lock up and output nothing until the end of the day.

I've not spend all the money on this expensive gear to fix it with a fan. This is Victron and not a cheap controller from Alibaba.

I'm experiencing the same problem with my 150/35. It's 3 weeks old and I've updated it immediately after it was installed. At first I noticed the dropouts was exactly 10min longs after which everything returns to normal but for the last week I've noticed dropouts of more than an hour. PV production has dropped from 13Kwh to less than 10Kwh which makes quite a difference. Has Victron solved the problem yet? Why is the product still being distributed with a know problem?

Dear all, just an update - we’re working very hard to get to the bottom of this. I’ll have more information within a few days.

Thank you for your feedback on this. Let us know if you need any further information or how we can assist in helping finding a solution.

great thank you - I'll send you an email.

if anyone else having this issue is interested in helping out (by testing a beta version) please shout and I'll find your emailaddress in the Community backend system and send you an email too.

I'd love to participate but since I've swapped my 150/35 Smartsolar with a 150/70 Smartsolar, I don't seem to have any more problems. I do however still have the same amount of PV, which is now about half of the controller's capacity.

I still suspect that the controller backs off due to temperature issues caused by charging close to it's capacity. Mounting it on a piece of Aluminium plater helped but In my case a fan definitely solved the problem.

Hi, most likely the fan helped to overcome/avoid the real problem, which is not directly temperature related.

Hello, when I had the issue I contacted two friends who have 150/35 Bluesolar and they weren't experiencing the issue but were running an older firmware version, 1.46 or 1.48 maybe. I was asked recently if Victron had a fix yet because they wanted to upgrade the firmware but were concerned about the issue impacting them. I can put you in contact with them if that would be of assistance.

hi @JKKM, no immediate need for that - let them just update their units. In case they then do have an issue (which I don't expect) then welcome for sure!

Note that in total, the percentage of installed 150/35 that has such issue is rather small. No need to worry in general, and now neither for that small percentage since we're close to having it solved.

Hi All, seem to have the same problem but it only started when we added a second string, went from 3S1P yesterday to 3S2P today and now it does this cutting out on a 150/35 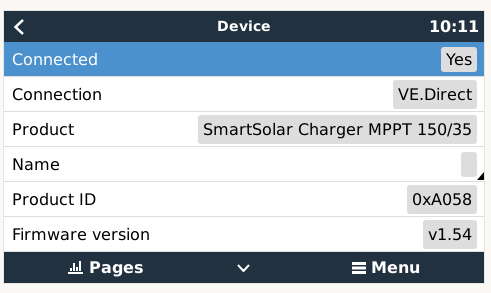 Sorry - to add to this it only seems to misbehave between 1.2 and 1.8K It maxed at 2K for most of the time without fail so not a temperature issue.

I have a very similar issue with my Smart 100/30 unit. Everything was working fine at the end of last summer when I put my RV in storage but after getting it back this spring and first checking my solar setup, the firmware updated and I have been chasing issues ever since. My voltage stays steady but my amperage output often fluctuates up and down sometimes down to zero. Other times it seems to work for a few days and then back to fluctuating. I suspect my charging is working and it is just what is being displayed on my phone screen. Currently on v1.54 firmware.

hi typerr, thanks - though I don't know if that can be related or more likely be something else entirely; I'll discuss tomorrow / day after and get back to you.

Hi,
I have the same problem with my SmartSolar 150/35.
Can I help with testing any beta or old version? 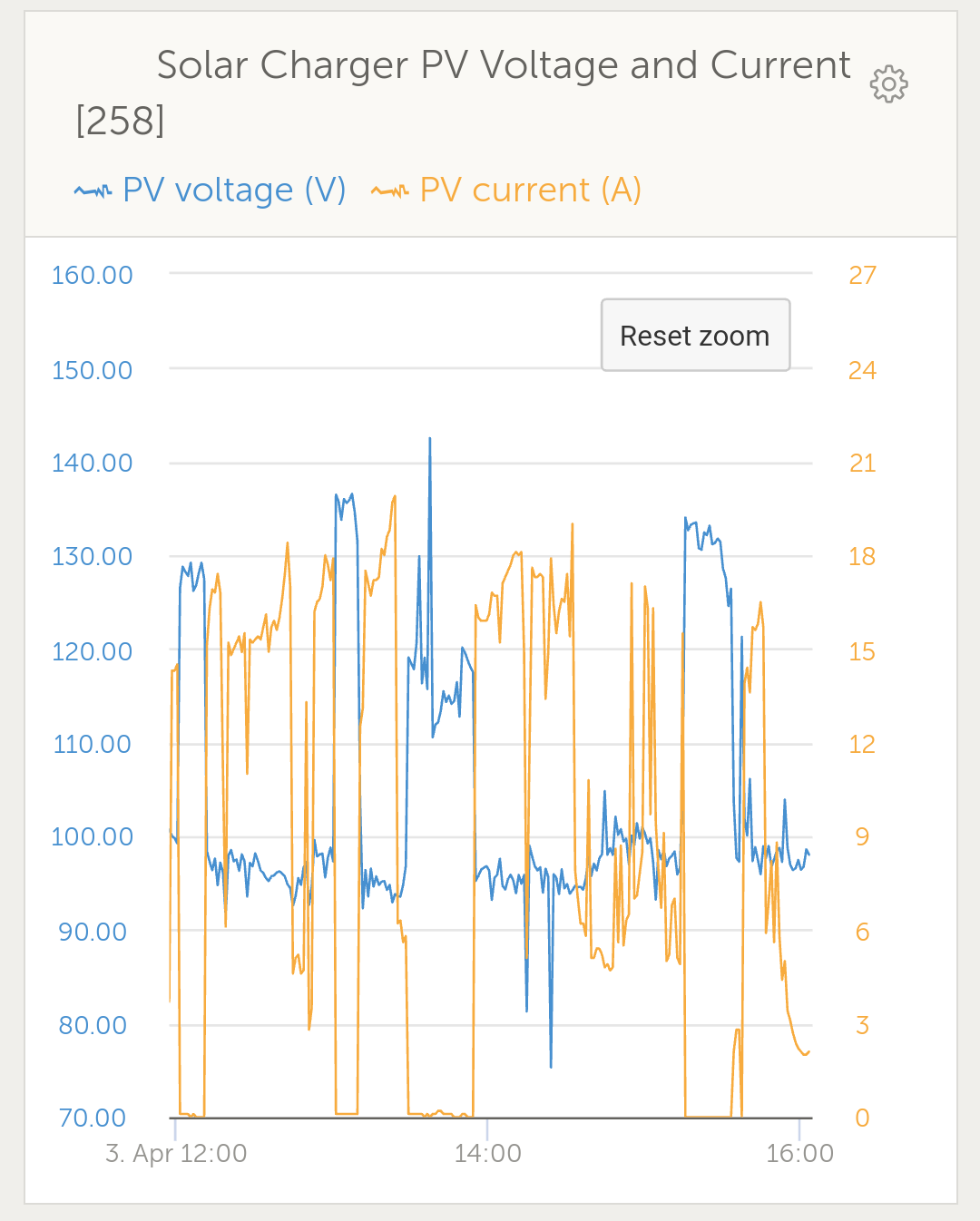 Need firmware 1.53 to revert back as 1.54 is giving problems

BMV-712 Smart not connecting after upgrade to 2.62