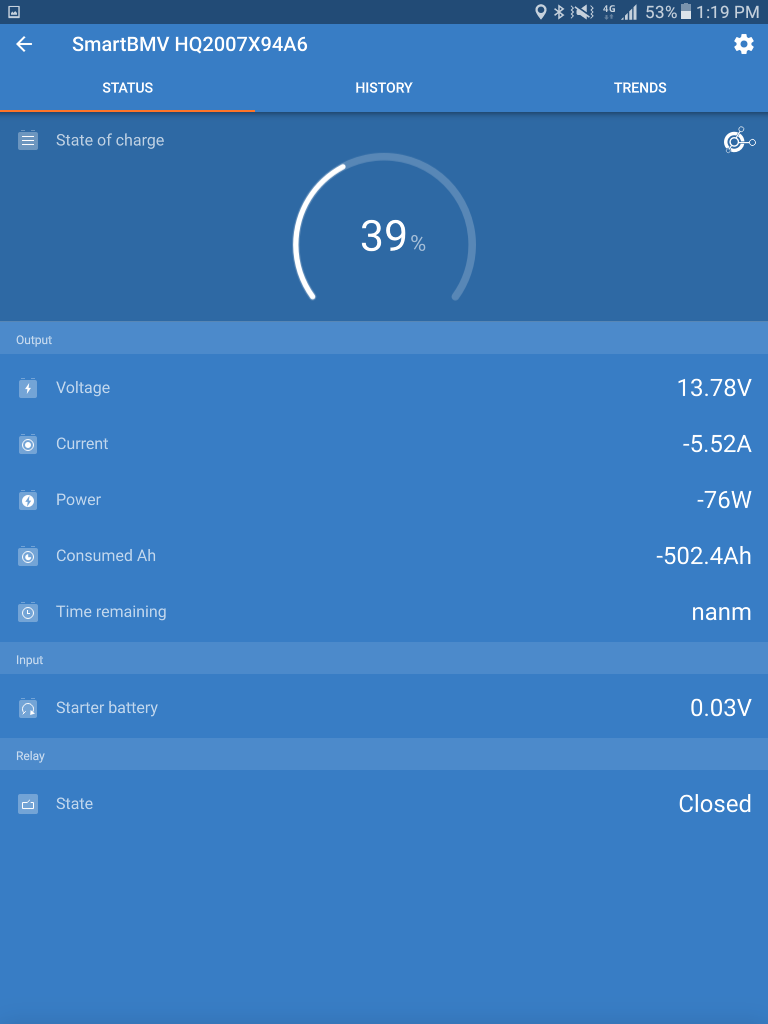 The sun has been on them all day and i have motored also but the percent is still going down. This has only started happening after i tried to fine tune the settings on the mppt and the bv712 after some of the information i read here in the victron community. It seemed to be working before that. The voltage is going up but the absorption time is very small. It goes from bulk to float with a short stop on absorbtion. I have attached the settings. Anyone see a problem in the settings?? 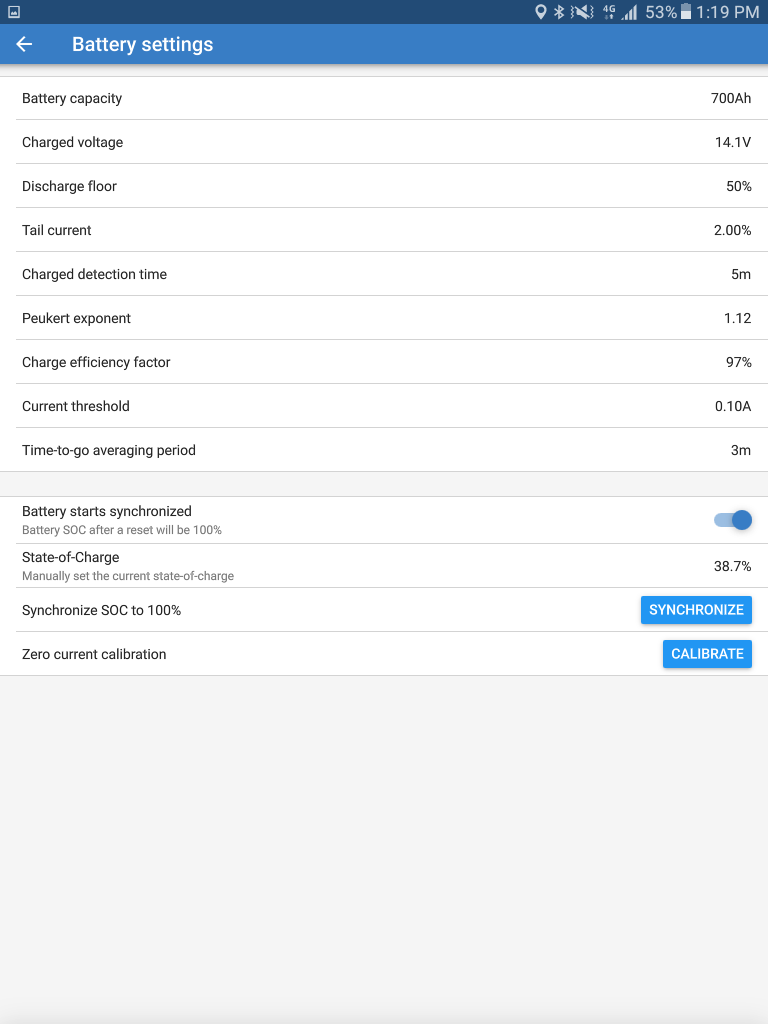 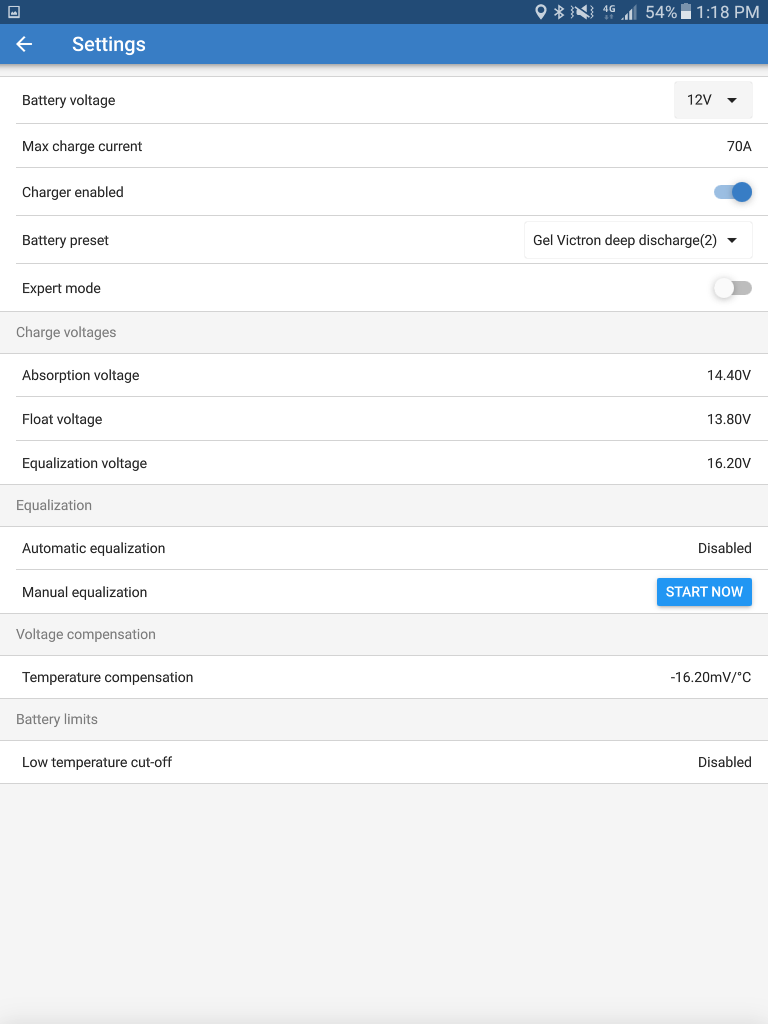 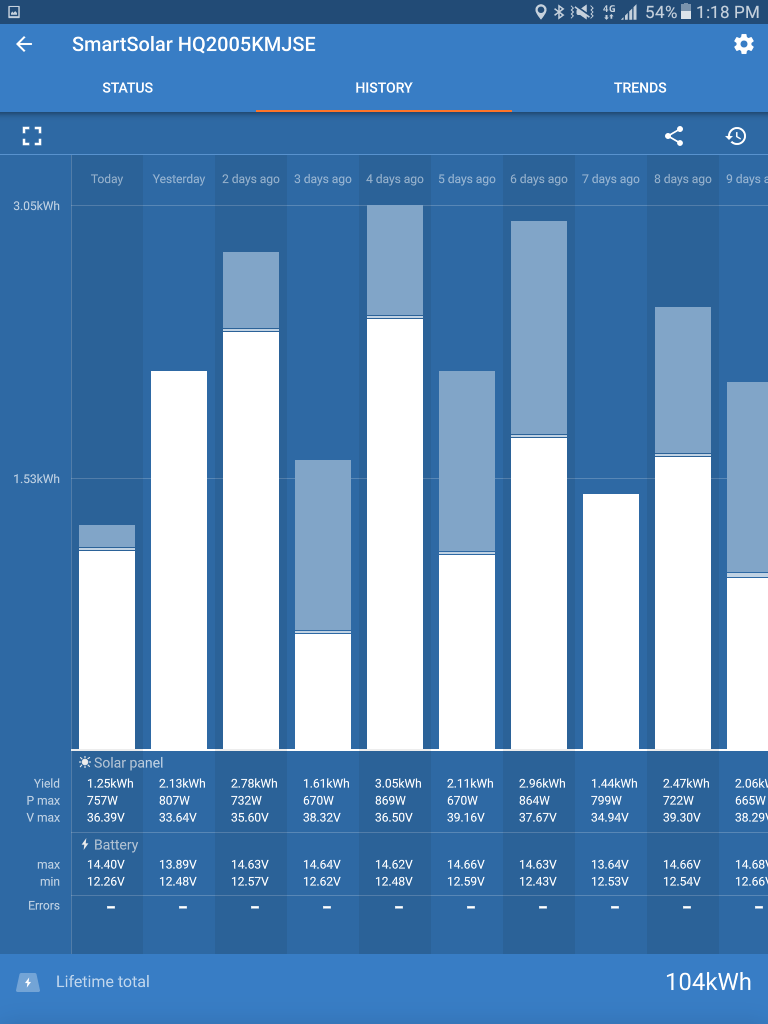 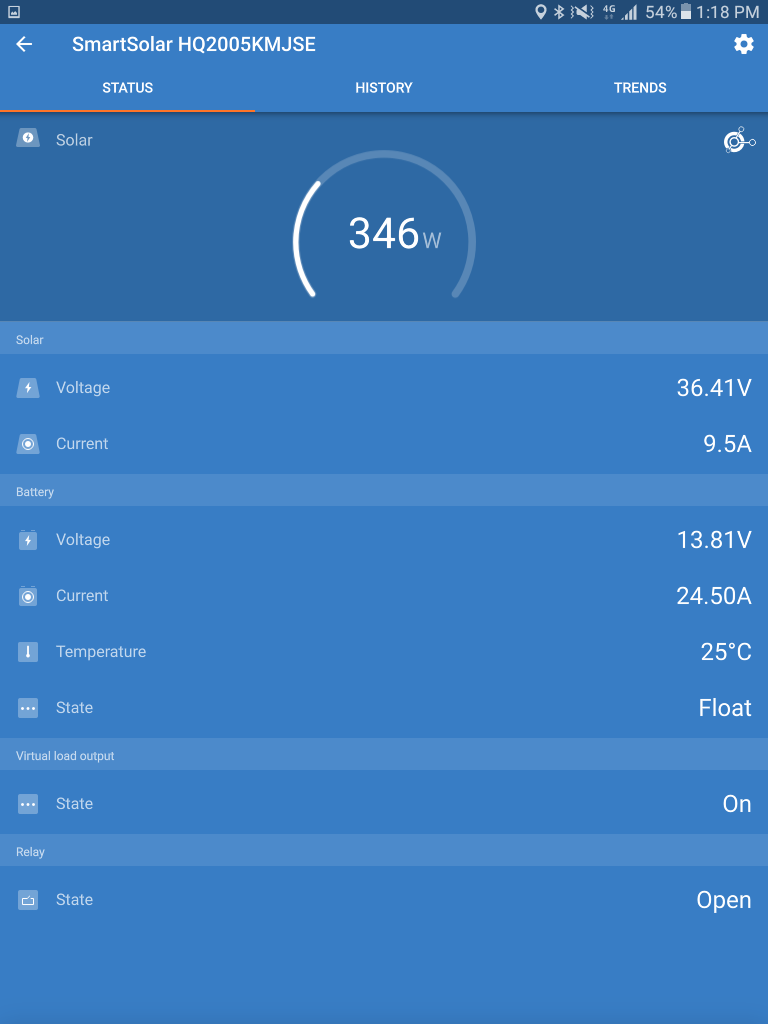 If the threshold is low and efficiency is high (97%) and you are getting 5 minutes float on an obviously well used system I suspect those settings are too close.

Do your batteries need to be floated that high? Once they have had that for some time they tend to like it (esp. older batteries but you have efficiency up to 97%).

Then you just play with your detection time depending on loads?

Your MPPT is set up for "battery life" ?

That is usually the cause of short absorbtion times if you haven't been deep discharging the system in my experience. It has caught me off guard many times!

You can set it manually to shorter or max length if you want of course.

I will have to think about the other issue but what tail and time to go settings do you have and what else is attached to system (not sure that would matter as it sounds settings based)?

Something is definately off.

You are showing no consumption on your MPPT screenshots (might need to update). Do you habe the BMV networked to your MPPTm disconnect that until you get things adjusted correctly.

Your efficiency is set to 97% -try droping it to 90 and raising it just a bit over time?

Your current threshold is .1? Is that enough?

I would set the BMV for SOC 100% after disconnect, unplug the BMV after a full charge (both ends of the up cable by the way) at night aftrt a FULL charge and letting batteries settle and then disconnect the PV's from the system and give it afew minutes then plug in the BMV and set zero current.

Then you are starting with a calibrated system.

As it sounds like the calibration of the BMV is off.

The absorbtion time is a different issue if the MPPT is doing it's own calculations and not networked to the BMV. I have had my BMV do all kinda of wonky things like this is set up is a bit off. Whenever it acts weird I let the MPPT do it's thing and do the abovereseting the BMV monitor's calibration.

It might not be the best way to start a calibration but I like to have a full resting charge and auto SOC 100% right now to trust the factory settings for that, for now before I do too much customizing.

The only other thing is you have "manually set state of charge" at 38.7% or something. With the voltage around 13.8 already the BMV is going to "see" that as a less than 40% SOC!

Unlink the bmv and mppt if they are networked, reset the BMV by calibrating at night with the pv's disconnected and batteries fully charged and rested for an hour or three to be sure (bmv needs to be calibrated every so often anyway).

Then you can work on absorbtion time and float voltage settings in the MPPT if they don't make sense with the use on the system for short absorbtion times.

Expert battery mode is where you can change the absorbtion times if you feel it's needed once to get more than 0.03v between the different charging states vs detection time, current and efficiency thresholds.

Thanks for all your input. I have disconnected and calibrated with no current but i will follow your advice and reset it all. What voltage should the charged voltage be on the battery monitor. I set it according to advice online. I guess a charged battery voltageon the bv712 would be the same as the float voltage on the mppt? The other settings are victrons own settings for AGM battery's. The current threshold and time to go as well as the other settings I have no idea how they should be set. The maual is pretty light on explanations for how to set them.Is battery life the setting you would use?

Your BMV shows 5.52a moving out of the battery, mppt shows 24.5a charging in.

This means either the system is wired incorrectly or you are consuming more than you are generating.

So your SOC will not be rising.

On the setting side for AGM. A peukerts of 1.25 is more realistic and a longer tail current of 4%.

The mppt is allowing 24.5amps in to the batteries and im only consuming 5.52.

Unless i am mistaken . Does it look like i am consuming 24.5 amps to you? I am not sure i understand your observation

I second this. The BMV counts what is going on and coming out of the battery. So if you are charging it directly to battery it is not counting the charge going in at all. So it is not able to show you correctly what the battery capacity is.

All charge circuits including the alternator if it is contributing should be attached to the shunt.

Maybe check your connections against the diagram.

I think you have cracked it Alexandria.And thanks for clarifying it Matthias. I have left all the negative connections on the battery terminals. I will swap them to the load side of the shunt and hopefully see better results.Thank you very much